Soo.. :D I’ve decided on something I’d like to collect, but he doesn’t have much merch. D: So I’m pretty much getting anything and everything available. XD I don’t have much yet but I wanted to share! :3 I’m also waiting on a few things in the mail but I’ve a feeling they’re going to take a while to arrive and I wanted to get my wants out here. xD

What I’m mainly after is a Pokemon Center Shuckle charm from HG/SS, I’d also like a shuckle swing chain (Though I know they’re not easy to come by. xD)

But if you have anything that features Shuckle, lemme know! :3

xD; A grand total one TWO trading cards yaay. D: AND THEY'RE THE SAME ONE. xD;; My cousin is going to give me one but I’ve no idea what it is yet, and I have the holo shuckle from one of the HG/SS sets coming in the post. xD I’d really like some more cards, and if anyone has any for sale that are in different languages let me know! O:

This is the Shuckle plush I made along with a Pan sticker I bought from Schenzi. :D I’d love more pan stickers, I think Shuckle only has one other of him facing forwards but a couple of doubles would be awesome so I could have some to stick places. n_n 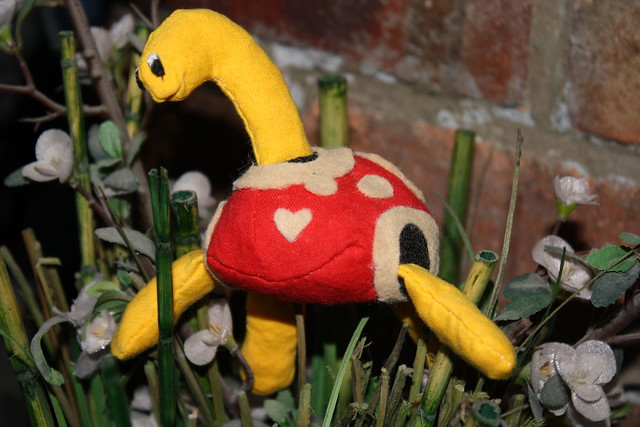 Picture of him on his own. o: Okay the stitching sucks and I had no pattern for a Shuckle and I’ve never really made a plush before so he’s a little messy I guess but I still really like him. :3 At least he looks happyy. xD

Still have lots of stuff in my sales, which can be found here:
http://hamsteh.livejournal.com/1001.html
I guess I’ll accept trades for merch of shuckle, though I’ve never done a trade before so I’d probably prefer not to. xD;

I was also wondering if anyone is selling a pan sticker holder/album. (I believe they're called seal holders?) I was considering buying one from y!j but I don't wanna get screwed over by fees/shipping. XD; I'd also like lots of pan stickers if anyone is selling them cheaply. o: They're really nice and I've heard they're easily reusable so I'd like some to decorate things with. :3
I think that’s about it anyways. O: Throw your Shuckle merch at me! XD