Re-introduction, Update and Help me find my Grail :3

Hello Poke-collectors
Its been a while.  So I think its time for a bit of a re-introduction.  I joined over a year ago and was decently active (and somewhat a lurker before then) but then I sort of dropped off the face of the earth, but now I have come back. Gonna show off my collection as well as the fact that its been completely re-organized since the last I was here. I sort of ran out of space and had to move quite a bit around. Its still pretty crowded but much less so.  Though at the cost of 95% of my blastoise's having to be put into storage for now until I can find a place to keep them.

First an overview of the area to which I house the bulk of my visible collection.

The middle shelf used to have books and movies, but has been re-purposed for pokemon now that I found a new place to house those things.

First up is my Snivy's  I used to feel the need to really collect this guy when he first came out. Now I think I would be happy for him to remain a side collection. There are only a few items left of his that I'm actually interested in getting, then I think I will be happy with what I have. (Aka need kids, zukan and pokedoll)

Moving on we have one of my main collections. Pidgey line.  I mostly am interested in Pidgey and Pidgeot, though Pidgeotto sometimes sneaks in. Its been a battle to get items for this guy, as a late comer to collecting any gen 1 pokemon.  Still activally seeking the zukan, bell plush and pidgey and pidgeots really extremely rare only seen once semi-legit European plush.

Because its hard to see in this picture, here is a shot of my fav ACEO from a previous collection update

I love this one so much X3

Next up, my other main collection Aerodactyl. (For being my most wanted and favs of my main collections, pidgey and aerodactyl are really small...if only because of the headache of trying to get items) Aerodactyl is my favorite pokemon and its certainly looking a lot better then when I first joined when he was nothing but a pile of cards.  Also recently got the buildable model, so that's one dactyl grail down :D

Next to my dactyls is the start of my newest collection. The only Gen 5 pokemon I am activally and relentlously collecting. Archen and Archeops. (That is until Keldeo is released. Can't resist My Little Kirin X3)  This collection is very small right now, but I hear Archen is getting a plush in January (along with his mpc...whenever they decide to release that) and of course the charm set thats coming in Feb. I smell birthday present XD 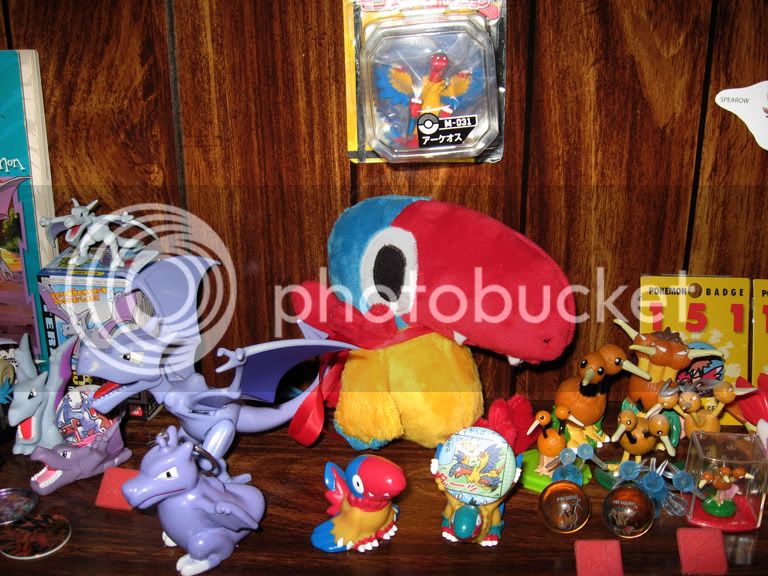 Next up is my little side collections. Spearow, Fearow, Doduo and Dodrio. Haven't added anything new to these guys in a while, though I'd like to get the TFG's for Spearow and Doduo. (zukans as well would be nice X3)

Moving down to my bottom shelf we have another one of my main collections, Ho-oh. This collection is still pretty small but then I haven't been as actively collecting things for it as much as some of my other collections. Recently won the clipping figure but it hasn't arrived yet X3

Also my large Ho-oh plush, which I haven't found a perfect place to display yet. 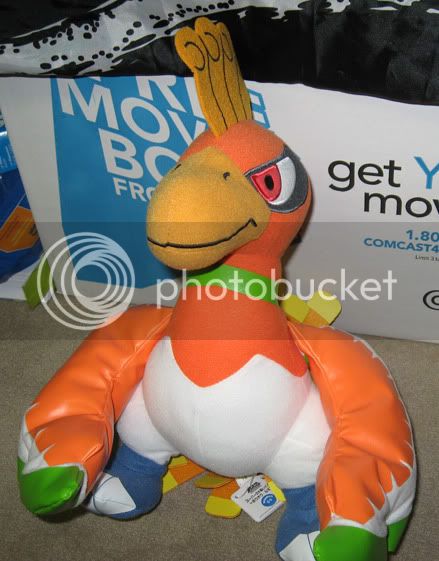 Now the final of my main collections, we have my shaymins. Used to activaly seek out both Landmins and Skymins, but I think at this point I'm happy with what I have as far as Landmins are concerned. So I'm only looking for Skymins these days.

Moving on we have my pathetic trainer pile. I'd really like to collect Trainer Red, but there really isn't much. Need to get the TFG still.

Finally we have my secondary corner of pokemon.  Up top we have my fav skymin plush (The PC Mystery Dungeon one) and my pokedoll Arceus (I have a soft spot for the god pony)

And we have my Misc Plush and figure Box. Here is where I keep plush I bought because I like that pokemon but really I don't have the room to actually make a collection of them. Also some random figures that I didn't but away into my big box of other pokemon I don't have room for. Fav here is my Japanese (with tag :D) Shinx Pokedoll. It was a sort of gift trade with a friend a while back (He had gotten it in Japan during a trip) and I never knew until I joined how rare this little guy is X3


Now for the second order of business. I'd like your guys help. I am looking for one particular item, something that I consider a grail if only for the amount of effort I have spent trying to get it, one that has eluded my grasp (I think six times at this point) and with a duel lose these past three weeks have got me in sort of a downer over it.  I speak of course of this guy:

In the past three weeks two have popped up on Ebay uk, and with high spirits I went for him. I lost both, to last minute snip bides in the last ten seconds...by the same...exact person. TT_TT (at least it appears to be the same exact person) To put it bluntly, its been a downer of a month. So I ask you guys...if you know of one that is for sale at a reasonable price...
Tags: aerodactyl, archen, archeops, collection, dodrio, doduo, fearow, ho-oh, pidgeot, pidgey, shaymin, snivy, spearow, wanted
Subscribe