A Taste of Serendipity / collection update.

It has been a great long Thanksgiving weekend at San Francisco, and now I'm back home in LA with a suitcase full of memories...and toys. Beautiful beautiful toys. 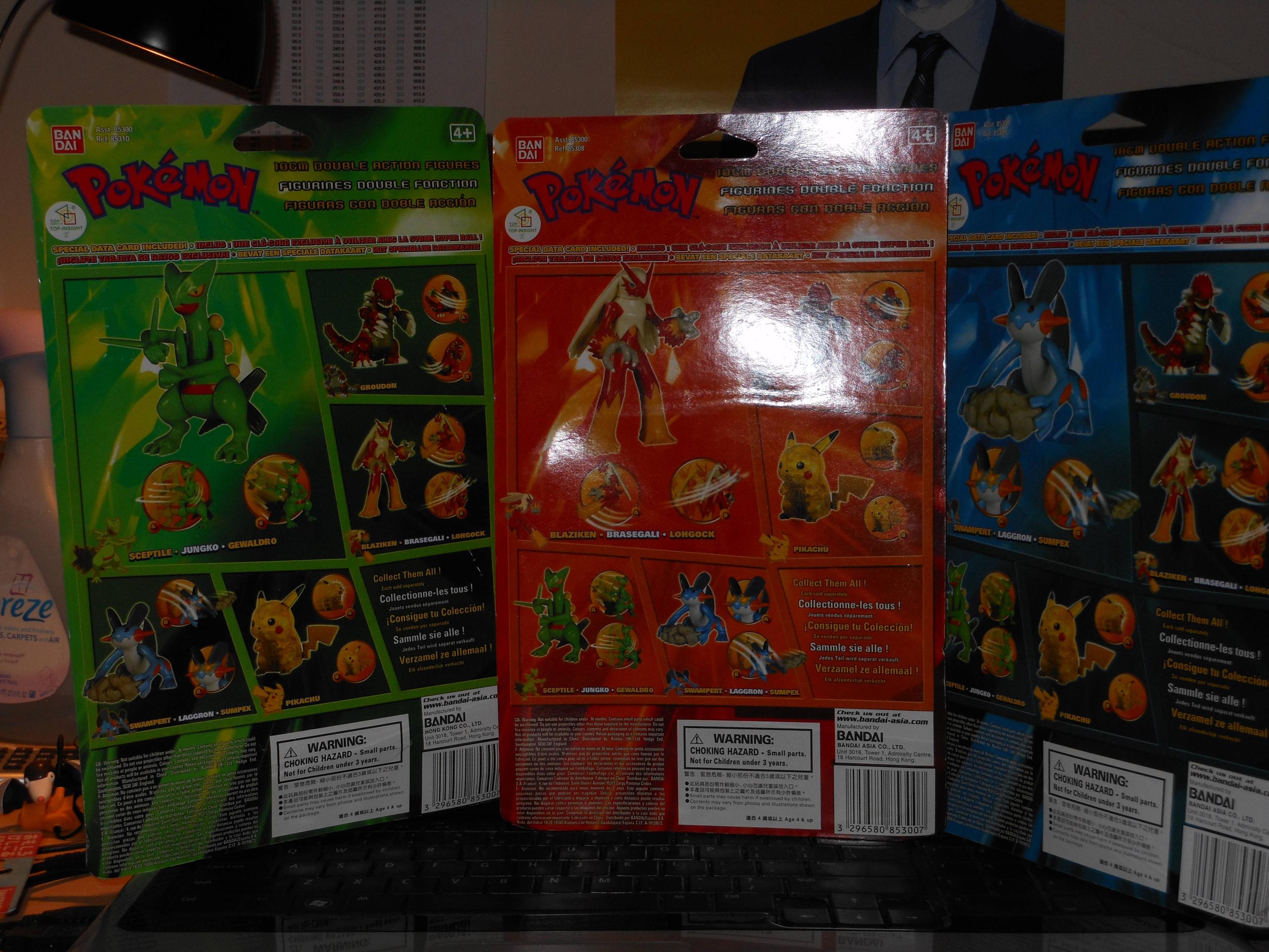 We started the day off with some R&R at our little room at the Super 8. It was Thanksgiving night, so we all rested ourselves for Black Friday's long lines. We didn't get anything Pokemon related, so I'll just get this out of the way.

The next day, we went out to visit Japantown. First stop was Japantown Collectibles at the Japan Center Mall. This is my new favorite store, they had the new Tomy figures, Tomy DX's and the wind-up model kits in the back. The best thing I noticed about this store was that they sold the Tomy's cheaper than any other store I knew of, at $8 a piece. I then went to JPN Toys upstairs, they have the little Tomy's too but the new ones cost $10, while the previous lines (including some 3rd Gen ones) were for $7. The store even had 15% off everything for the weekend, but I was afraid to spend more with the little money I had just in case I something at China Town. And I could just buy any of those old ones from you guys anyway, because you're all awesome.
Here's what I got from Japantown Collectibles: 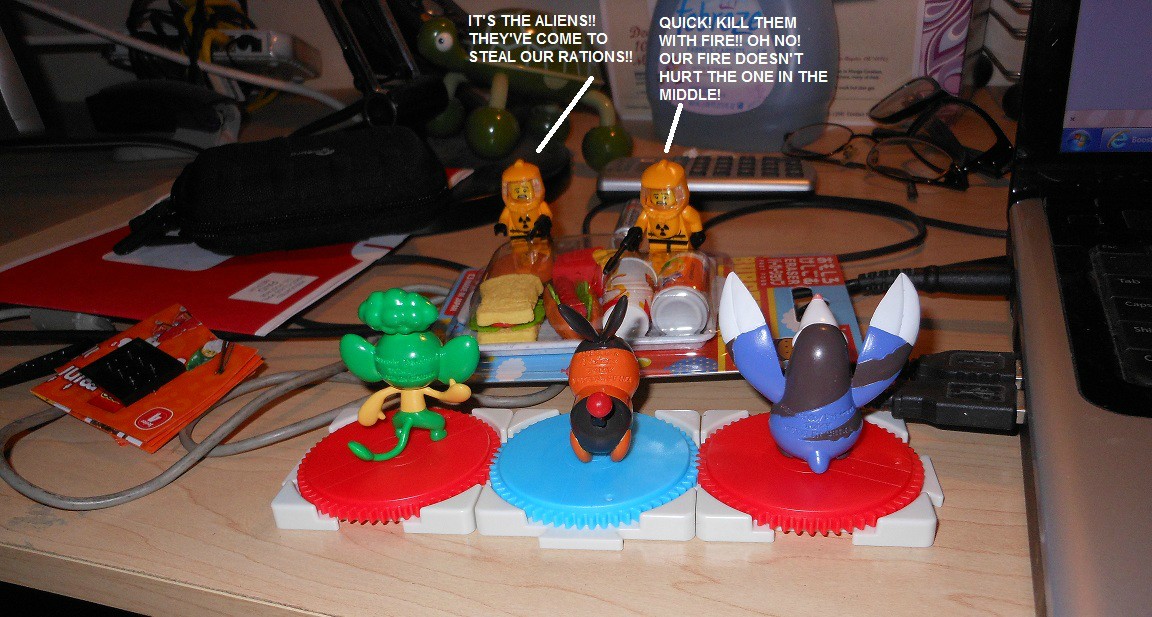 I also got two more Hazmat Suit minifigs and a set of food erasers. These aren't related, but I bought the erasers just so I could get a picture taken with a guy in a Rillakuma suit. Couldn't take a free picture with that bear without buying something from the store in front of them. It was worth it. Just throwing that in there.
And these are all of my Japantown purchases. Great town, great food, great toys.

The next day, we went to Chinatown. Five years ago, I went to this one store that had the coolest toys called the Far East Flea Market. Lots of Gundam, Zoids and Mega Man kits back in the day along with various other gifts. After trekking through the entire town for almost an hour going up and down hill, I finally found that place since I didn't remember its name. I went in with much enthusiasm but eventually realized there wasn't much in there but some of the usual old novelties I didn't want. I was quite disappointed. My dad, who was walking with me at the time, suggested we go up one more hill. The last upper hill already looked like the town limit/outskirt and I didn't think I'd find anything there. But with nothing to lose and still a lot of time to kill, we went up anyway. As I reached that next block, I saw a very interesting-looking store. It was a little modest anime store called Powell Gifts, located on Washington and...Powell.

What a coincidence I'd find this cool store. What I was looking for was not in Chinatown but NEAR Chinatown the entire time, and in a somewhat unnoticeable location! The store also had the same Tomy's that JPN Toys had, and even a some of the old Gen 1 2-packs but all for $10 a piece. And a bunch of other great non-related merch too.

But that wasn't the best part. What I found were 3 awesome toys, toys I never knew existed (except for Blaziken), toys I never planned to budget for, toys I knew very little about, toys I just never ever EVER expected to find right here in this country. 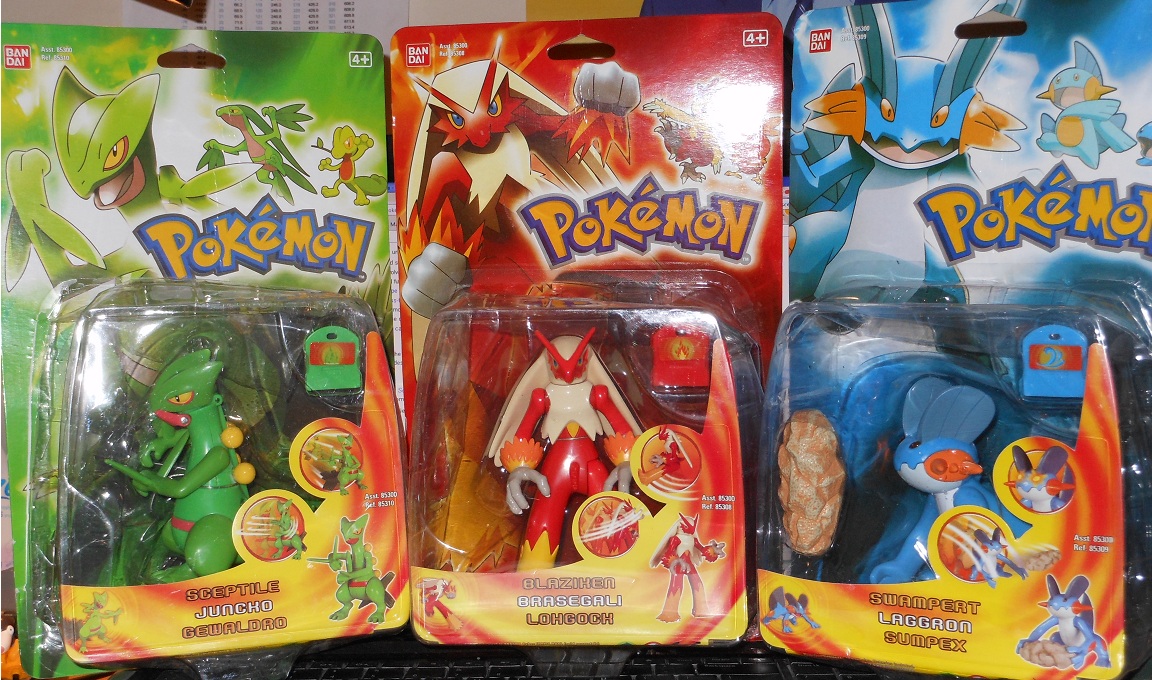 WOW. JUST WOW.
I quickly ran up to them and checked them out right away. I've been wondering about getting toys of these characters, and now I see three of them worthy of scale and my wallet. And DAT ARTICULATION, it's not much but it is much better than what Jakks provided for their Blaziken. 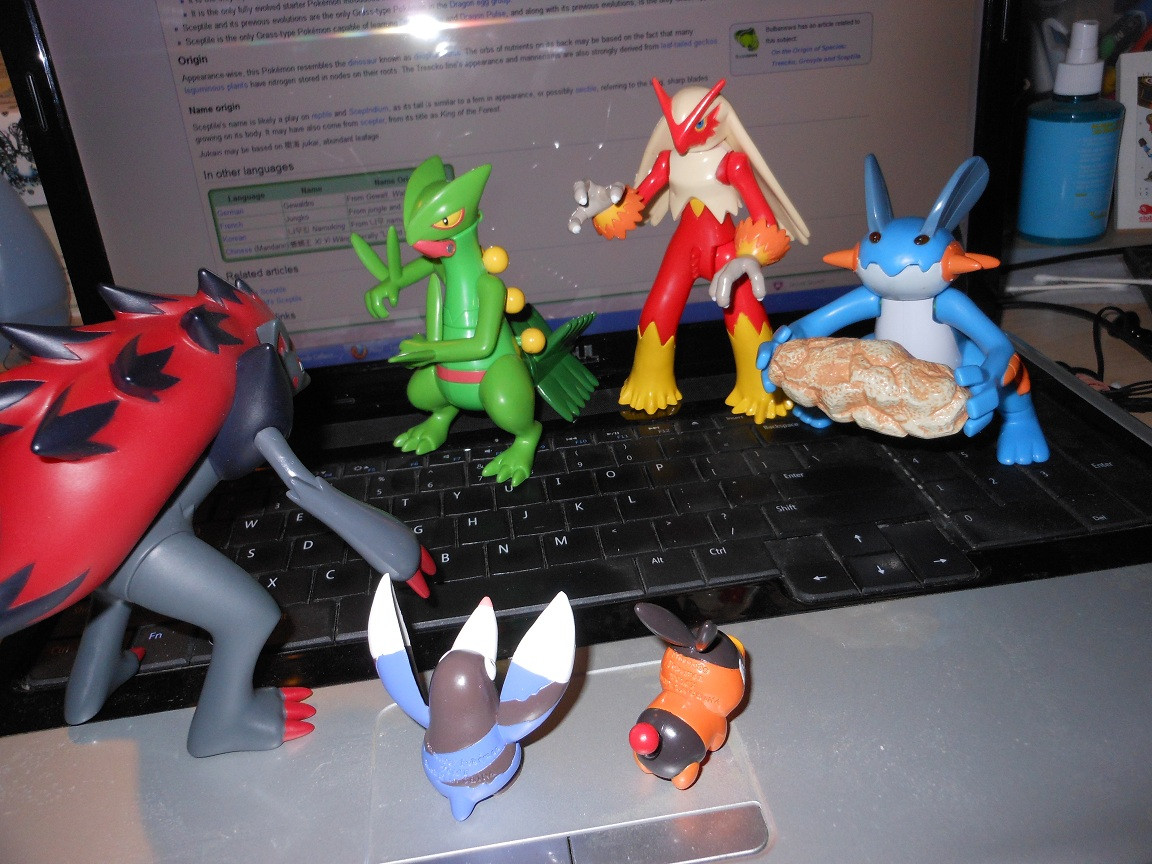 Anyway, it took me a while to decide on buying these guys. First, they were $20 each. Second, they didn't look real. The paint apps looked quite shoddy, and the store even sold bootleg items. Right beneath these toys was some Yugioh figure with Spanish words printed all over and there were cheap booty pokemon next to the real ones. Third, the blister packs were a bit busted up and there were rip marks that made it look as if someone opened them, but it was really just poor storaging. After much inspection,I recognized the disclaimers in the back reading "BANDAI ASIA," and "BANDAI UK" and didn't notice one hint of "Engrish". I was familiar with Bandai Asia as a legitimate company/distributor, but I knew very little of Bandai UK's quality assessment. However, I was convinced these were officially licensed toys and I asked the clerk, Lisa, what time the store closes. "In 5 minutes," she said. It then dawned on me that fate lead me to this store. I walked in near closing time, and we were going home the next day. I HAD to buy them. And so I did, and now my bank account is nearly empty once again. BUT there was an extra Swampert left behind. I regretfully couldn't afford to middleman it, as I already spent $60+tax. Hopefully, a member who lives there will do you a solid and send you one.

Anyway, on to these guys in detail: 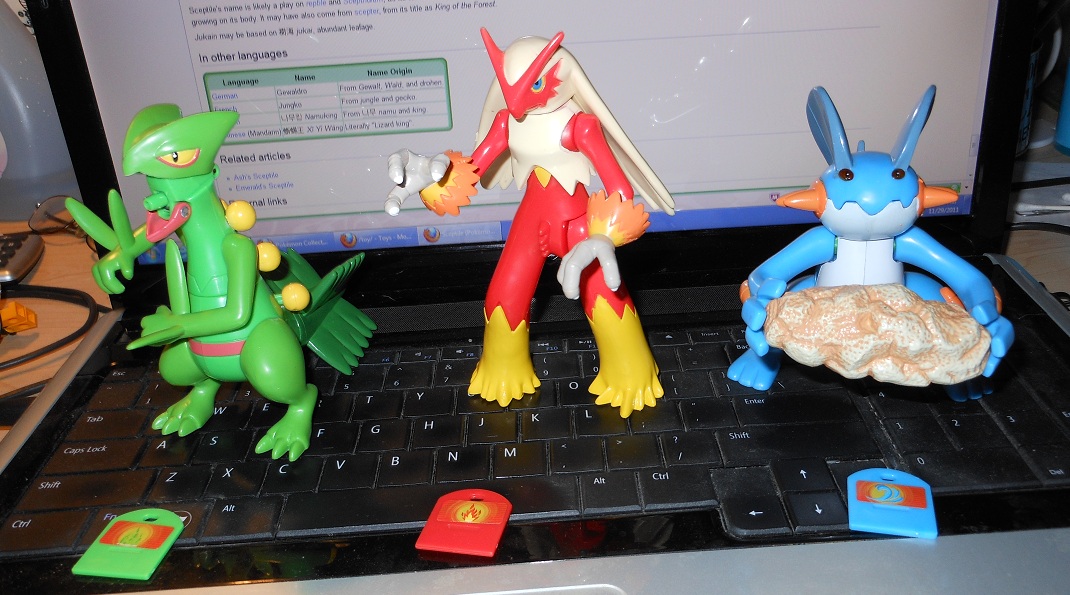 All toys came with some sort of non-technological chip, that works with some kind of Ultra Ball toy. There are some pre-designated bumps in the back that seem to activate something. I didn't find the toy it works with at the store. Also All the toys are around 5", have basic arm/leg articulation and their own unique action feature.

Sceptile has some kind of Leaf Blade/hip swivel feature that is probably activated by pushing its lower left "seed" (the yellow ball thing). The one I have seems broken in that feature but...eh. If you open its mouth, It reveals some kind of gun barrel, which is actually a pull string. I believe this is the Quick Attack feature. You open the mouth, hold its tail, pull the string, let go of the tail and it will slide on your desk with the wheels under its feet.

Blaziken also has a hip swivel feature. Push down its right arm and does some kind of punching motion as well. You can also turn its wrists to do other kinds of punches associated with the feature, like a sky uppercut. If you push the tail on its back, its only poseable leg will do a Blaze Kick action.

Lastly, Swampert's eyes light-up by pushing the button behind its head. It's other feature is the Mud-Slap (or is it Rock Throw...it looks like he came with a rock...wait, he can't learn that...I think...I bet it's Rock Smash...yeah definitely Rock Smash), which involves pulling its legs back to make it stand upright, then its arms will rise. While in this position, you press the button on its left leg and it will throw the rock. This feature doesn't seem to work with me neither. Oh well, as long as they can move their arms, I'm fine. Also the rock looks like a loaf of bread to me.

And that's it. What started off as a search for those little Tomy's and a bit of sightseeing, ended up being a treasure hunt that ate my wallet. I personally didn't like the 6 hour drive from here to San Francisco, but these new additions to my collection made it worth it all the way. Truly a taste of serendipity. 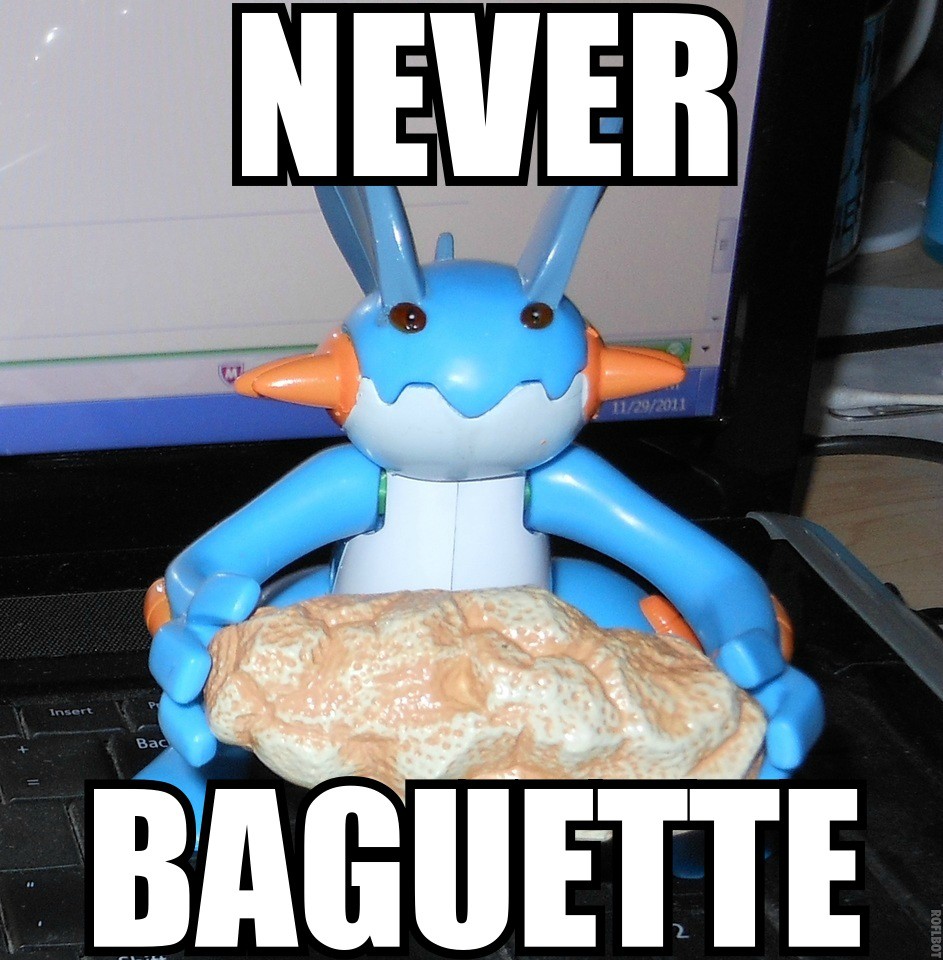