i've got gadgets and gizmos a plenty! i've got whoozits and whatsits galore!

you want thingamabobs? i've got three hundred and twenty!

Full disclosure. I will admit i have been grouchy about charms. It was memories of the Johto charm time, which was simply not very fun, my worst day at the Center to date. It is also hard to keep organized when handling such a large amount of tiny items, and SOMETIMES we on this community don't tend to FOLLOW RULES when it comes to claiming and payment... I was not looking forward to this at all!


IT WAS ALL FOR NAUGHT. EVERYTHING WENT BETTER THEN EXPECTED.
I cried this time too.....from the sheer beauty of how the Pokemon Center staff handled things, from how 95% (only ONE troublemaker!) of all you beautiful beautiful beautiful members have followed rules completely when claiming and paying making it SO EASY to begin packing your charms, I just want to squish you all into my arms in such a big hug of joy and love and admiration!!!

As for how it went at the Center, a friend I went with wrote a bit in her LJ, and I will use her summary since it's just right.

"Today was batch number one's release. Gin was expecting there to be a lot of people so she wanted to get there an hour early to start waiting in line outside the store. When we got there, her two friends (

miss_fuu_chan and andyboyh) were already there waiting for us...along with a bunch of other people, some of whom looked like they got there incredibly early because they had blankets to sit on on the ground.

Last year's charms was apparently a big fiasco where the staff were totally not prepared for the amount of people and had grouped all the charms onto one section of shelves, which meant it was impossible to get to the shelves without getting punched in the stomach, which is what happened to Gin. This year, they had the line set up so that small groups of people were let in at a time to keep the over-crowding down. Then on top of that, there were three sections and each sections had the same pokemon, so people could spread out and not have to crowd in one area.

Once the doors opened, we only had to wait a little bit before they let us in and we easily got all the charms that Gin had to pick up as well as the charms that we wanted."

In short... it was beautiful! And here are your charms!

I don't want to take too many closeup shots because I want people to be able to show them off in their collection updates. But you can get a general idea...

Now what is this?!?!?!???!!!! A BIG GOODS PROMOTION FOR A MYSTERY POKEMON... On February 11th when I will not be in Japan SOB.... why do I sob? Can't you guess who this Pokemon is? But do not despair, lovers of this BEAUTIFUL creature. I'll be back a week after, so I'll still be picking it all up with just a slight lag... :D

Roughly 30 payments still needed. Slots for Johto, Hoenn, Sinnoh and Unova have all been extended to TEN EACH! Please go check which slots are open and which you have claimed for yourself so far. People who were on waitlists have automatically been transferred, so do check!

A few other FAQ: I am currently nottttt really going to do a second big Kanto run, but I will try to get some extras of the more popular charms if possible for you guys. For now, go and add to your heart's content onto the wave 2 and 3 lists, even waitlists, I will try to take care of you. Just remember wave 3 charms will also be sent with a 2-week lag, like anything from MYSTERY CREATURE promo, but will be secured for you on the day of their sale.

Finally, wave 1 charms can be combined with Cheeky Couple Pikachu promo items, but most who want to do this for sure have already asked. Wave 2 will be able to be combined with the new canvas plushies. 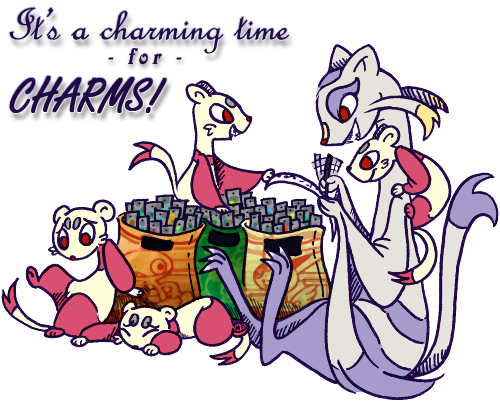 (yes, even my banner reflects my changed attitude about charms! hooray! happy weasels!)