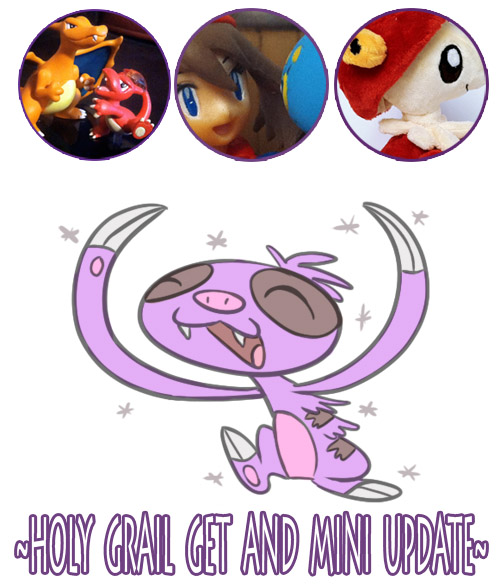 I got some new gets, some being extremely rare finds and a holy grail! I've decided to split my collection update into two parts because A. I'm still waiting on items and B. Theres items in here that deserve their own update all to themself.
They're that freakin' amazing.
No joke, collectors. No joke.
Check it out!

First up, I got a new Breloom wap for my ever growing Wap collection! Its the awesome clear sparkly one on the end.
Courtesy of Lampent! She gave it to me for free with my order which I thought was so nice and I was totally thinking I should of bought it. XD They read my mind.

I've been looking for my own Shroomy magnet for ages but finally gotten the one I first seen in Lampent's collection XD I'm so happy to finally have it. Its actually a lot bigger than I expected and nicely made. I'm curious to see what others from this set were released.

THIS! THIS THIS THIS THIS THIS!!!!!
Oh my sweet goodness, I've been after this baby for so long. I've only ever seen it in Lampent's collection and I've been searching high and low for it since. I ended up getting this beauty from her in the end and I couldn't be happier. AAAAH! My Shroom line AG retsuden stamps are NOW complete. I can finally close that chapter. Ahhhh, It's so relieving. I could seriously cry, haha.

I'm not sure if I featured this one here but if I did, I guess you get to see it again since I'm on the topic of Retsuden stampers.
Beautiful. ;A; I have the bestest friends on the community who are kind enough to come to me whenever one of my items hits Y!J. Let alone bid on said item as my middleman. This is one of those items. So, SO rare. How I hate them for that very reason.....yet....how I love them. I looooooove this stamper. The only Vigoroth stamp I've seen is the one I own.
I'm so happy I get this pose in stamper form. *Totally forgot to take a photo of its stampy mark when writing this post*

I won this pog about a year ago in a group auction only for mine to get lost in the mail. A few months later I found someone selling it! I thought it would be gone forever but now it sits triumphantly in my collection. I love the blue designs and Vigoroth is a beast with 350  HP! What?!

Whoa, whoa whoa whoa. Let me just say it right now, dice are incredibly hard to get. This item was on my want list for many many months. I was even on the ball and ahead of the game since I knew about these before they released but for some odd reason. I couldn't find these ANYWHERE. They came out in January of 2012 and I didn't get them until July 2012. o_o No one was selling them, or auctioning them, or doing pick ups.  I just sat there and waited for SOMETHING for them to pop up. Sheesh. Then finally someone thought the same thing and decided to do a group buy! *u* I love dice since the hunt for them is so fun. I'm glad baby glider was featured and he's the holo side to boot! How special.

These sprang on me out of nowhere but everyday I thank pokecen for always making dex line merch, meaning that my favorites will always get something new. c:  Lovely can badge, they're a bit bigger than normal pins from the center. They almost feel hollow. They even came with AR cards so I can now have official flying squirrels on my 3DS and they'll be so much bigger than usual!

This was something that kept slipping through my fingers but I knew I would eventually run into again. It's a domino piece from a Japanese game. :3 It's a really cool piece!

I've also got this set for the Emonga zukan! Yay for baby baby glider! I'm happy he got a peg. SO happy he got a peg but very sad how bad its  paint job is. :< Look! He looks like he has two noses. Bleh. I plan to get another set, for a spare Emonga to paint shiny but it will be a pain to do since its as big as a dime. X_X Let me know if anyone has a spare Emonga!

Zukan gets from White_Chocobo's zukan auction. I had a Sandshrew but needed/wanted more a Sandslash. <3 They're quite lovely.

I also got these bad boys from the auction. <3 But baby fire lizard is missing. :c Anyone have a spare? Or if not, at least think of me whenever one comes around in auctions. That would be amazing if I could complete the set.

EEEEEEEEEEEEEEE! My precious shroomy baby!  You are beyond perfection! This is my gorgous Shiny! Breloom sitting plush I recently commissioned from Cwinget a couple months ago. <3 They truly outdid themself with this one. Based on a turnaround I've created, they got EVERY angle exactly right. I've always wanted porportionate plush of my lines but I never knew I would start with their shiny counterparts. X3 I hope to get its matching normal variant twin. He matches my Shiny! Slakoth Cwinget made for me awhile back. The detail on him is just stunning, he has little brown shines in the eyes, a cute little mouth and all his shroom lines are visible under his hat. The hat is perfect btw. I'm in love with this plush and I hope to get more! ;3;

You may have all my cries! Ah!

I've been having such a horrible month lately, bad news after more bad news it felt. Mostly family matters and death but lets not get into that.  I was feeling really crummy for the past four days, I've been sewing to keep my mind off things....then THIS showed up on my doorstep this morning....I knew exactly what was in that little box. Getting this box today was such perfect timing! What a reward to behold after a crappy, crappy month. ;3;

I got camera happy and wanted to do a really fancy photo shoot for this jewel. <3
First a little history, this item came out in August 2006, Yujin released the figures of the main cast in Pokemon movie 9," Pokémon Ranger and the Temple of the Sea." Five capsule toys are included,  with dynamic poses and assembly pieces. Similar to the zukan sets. May, Jackie and Lizabeth's neck are movable, aswell as May's head, arms and legs.The figures were going to sell at ordinary toys stores, however by some reason, were sold limited to Seven-Eleven stores only.
Because of that, these became SUPER rare, going for $100s and were hardly seen for sale again.

This has been dubbed one of my holy grails for years.  I only found it twice in the past couple years and one time I missed the bid by a few seconds since it was a Y!J auction and the hours were off. It went for so low too, I was kicking myself in the butt for a few months about it, haha. And recently, it was on Ebay for $150 and my computer decided to crash during the final minute of the auction. The sad part is, it didn't get any bids as it ended. I asked the seller if I could purchase it or if they were going to re-submit the item on ebay but they told me they were going to wait awhile until they felt like it and then never did. X-X I've been searching constantly but still was led in a circle lol

Here's a picture of the whole set. I really love the Ash and Elizabeth one *for the Buizel love*.

Auuuugh! Look at those details! She's perfect! The sculpt and paint are fantastic and so persice. Manaphy is detachable but it takes a bit to position it back on her arm lol The reason I call these Zukan diorama's even though they're not zukan due to scale is because they FEEL and look just like a bigger version of a zukan piece. I just love the material of the older zukan.

More shots of her because if you were like me looking for this figure, you know there was like 2 known pictures of the set and the phanplet and thats it! Here's the set with my Mienshao kid for size comparision. It's actually a whole lot bigger than a zukan set. The barrel piece and chair piece are attached to two pieces of the floor that latch together, May's head, arm and legs are posable. I can make her look away and at Manaphy. Her bandana tips can spin around her head. And be posed. This diorama is simply AMAZING. I'm so, SO SO SO happy to have this. My hands were literally shaking when I received the box. Thank you imensly to the people who helped me on my quest. This one probably my last major huge unontainable holy grail that was on my list. Now I feel I can find anything! Who else has this set? I'd like to know how many there are in the community. And are there anyone out there who have the other ones from the set? I'd love to see pictures!
Auuuuuugh!
I still can't get over it......
*Stares at figure for hours*

*Vigoroth, Slakoth, Slaking, Shroomish, Emolga, Mienshao, Mienfoo Settei
I'd really love to get all my favs in settei form, I've looked and looked but no one seems to have these guys in any of their sales or auctions. Please someone lead me to these guys!

*Slakoth/Slaking Retsuden AG stampers
I'm feeling kinda helpless finding these guys at this point. I've been after them for so long and I've been having the worst luck trying to obtain them. They truly are dubbed my holy grails....

*May's Wishmaker
This is my new holy grail for my May collection. I would love to find this with its original packaging.

Thanks for looking everyone, I'm soooo excited to show you what else I've been hoarding from you. >:3
Soon. Very, very soon.