So after starting with a single Kabutops tomy, I now have a somewhat extensive (and admittedly expensive) Kabutops collection! But, of course, every collection can always be expanded! If anyone has any of the things below, or any other Kabutops figure/anything, let me know! :D Here's what I'm on the lookout for! 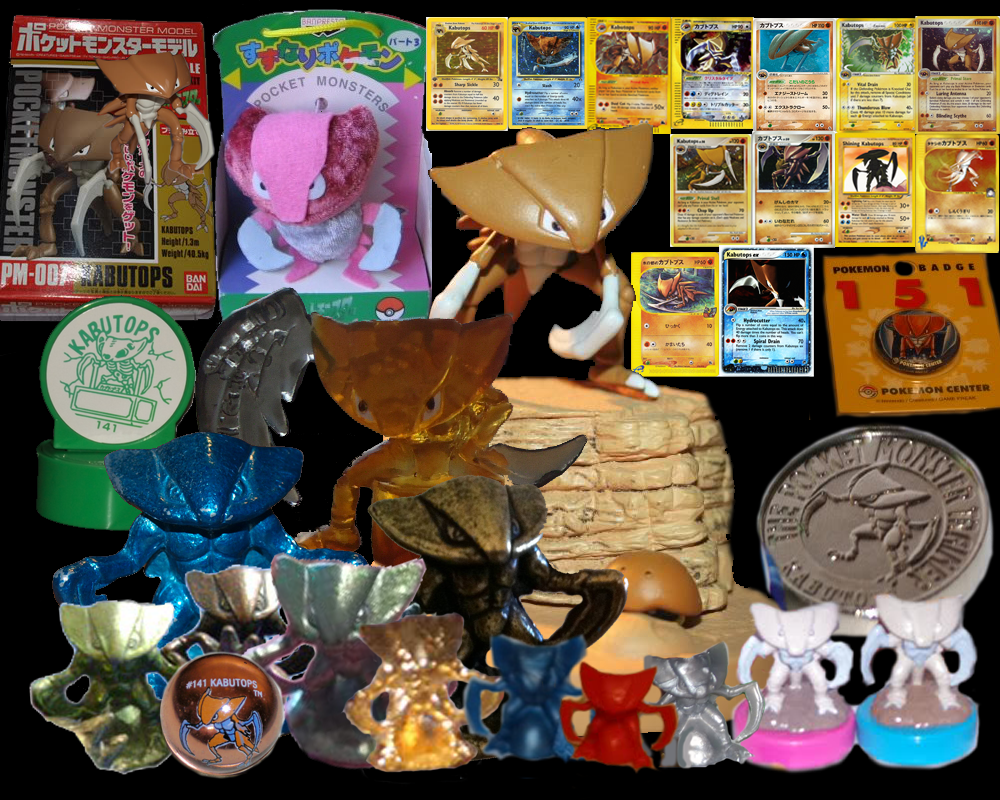 (if any of these pictures are yours and you want them out, let me know! Also, click for a larger view!)

So! In the top left is the rather rare Kabutops buildable figure! I've only seen two in collections since I've been here, and those collections were dating back to 2010 and 2009! He's definitely a grail :D

The strange pink Kabutops is his Bell Plush, and I don't think I can call myself a collector if I didn't have the only official plush made of him!

That large center piece is the Kabutops Zukan, atop his rocky base with a Kabuto beneath! I still haven't seen one of these for sale yet, but if you've one that you wouldn't mind giving up, let me know! :D

Trading Cards! According to Bulbapedia, there've been 13 Kabutops cards since the beginning, and I figured that's a small enough number to easily get! So if you've any of these cards in relatively new/mint condition, I'd love to potentially buy them! English or Japanese, either is fine!

In the second row is a Kabutops skeleton retsuden Stamp, but these are pretty are also haha it'd be awesome to have, though! I'd use it all the time XD

Next to the stamp is a legit Kabutops Battle Museum figure - I have a solid-coloured one also, but I fear he may be a bootie! So I'm on the lookout for a real one!

On the right is the Kabutops 151 pin, when the Pokemon center released one for each of the first-generation Pokemon! If anyone has a Kabuto pin too, let me know! :D

On the last row, there are a bunch of Metal Figures! The blue, greenish, copper, gunmetal, gold, and bronze! I've been avidly searching for one for sale, but whenever they come up via google search, the post is always at least a few years old :\ Getting one is kind of a holy grail for me, so if anyone out there sees one in an upcoming metal figure auction/sale/anywhere, pleaaaaassse let me know? ^_^

Marbles! I've metal, light blue, and dark blue ones already, but it'd be cool getting some more! If you've a marble in your collection that you don't want/need, I'd love to take them off your hands :D

The blue, the red, and the silver Mini Models! In just about every Kabuto/Kabutops collective I've seen, someone has had at least the red mini-model! So I'd love to have one, to join the ranks of those who came before me :D I'd also be interested in any other colored mini-models anyone has!

The Kabutops Metal Coin is something I've seen only in one collection so far! They come in varying metallic colours, and are relatively rare, since no one else has one!

Last but not least, Chibi Stampers! I have a green one already, but he's lonely and would love his blue and pink counterparts!

Thanks for reading! :D I've got a relatively large (in comparison to how it was) collection update to come in the next few weeks :D