A Wild Chapster Has Appeared!

Hello everyone, my name is Sharon but please call me Chappy. Some of you might have seen me around before and in actuality I've been here since March '11 but just never got around to introducing myself. Also I had like NOTHING of a collection to show anyone so i was kind of ashamed to even consider an intro post when I had nothing to show ^^;

I've had an on-and-off relationship with Pokemon since I watched the original show back in the 90's. Growing up with it and being 10 when it came out, totally got me hooked (and ready to run away and start my own pkmn journey cuz i was 10yrs old, I had my rights did i not? D8). I bought cards and all but I have since given them to my brother and have no clue where he put those. I have some Really old 90's merch though I only specifically remember a talking Togepi toy, but all of those things have been put into storage since :( Maybe when i move out on my own or something I'll have the courage to through all those boxes.

I have since gotten a nice little team put together, i think. 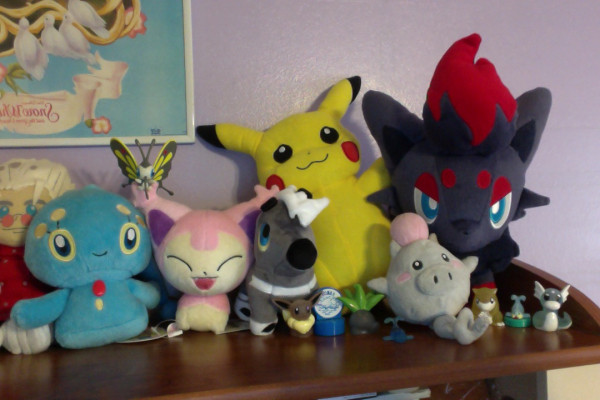 I actually bought the Pika the summer before I knew about this place so I didn't know, nor care much that it "looked funky" because I just really needed one for a cosplay at the time. He's not my most favorite but I guess he kind of is my most sentimental one. Zoru is close second though, since he's the first thing i bought from a member of this community ♥

Although I ADORE Plushies the most by far, Kids are starting to grow on me. Though I really have to be picky about what I buy because I don't always have spare money to go to things like this. I don't believe I'll ever get into collecting any specific Pokemon because I just like too many of them xD I also have nowhere near the amount of money to support me in that form of collecting, nor the space for it really.

I remember reading somewhere on here that by joining the community I'd have a "refined" taste or eye for Pokemon Merchandise, and i have to say it was totally 100% true xD