Why, hello there fellow PKMN Collectors...

Spectre is still sort of new to posting on the community, but they are a resident Colress collector; Akuroma/Achroma accumulator. Please don't get annoyed if I skip around with his name. (Don't even get me started on the localized one. :T)
Now, I am a monster enthusiast through and through, but this particular human fellow just seems to resonate me.
When full art Colress was confirmed for Plasma Gale, it was a bit of a double edged sword. Of course I was more than happy to see it, but considering that he ended up being such a good card play wise, this meant I would have a difficult time acquiring him within my budget (person, full art and a good card? heavens the drama!). When they finally started turning up on yahoo.jp they were going for at least the price of a booster box.

I said to heck with that, and decided to try my luck with actual booster boxes with the encouragement from some buddies. At the least I'd get some regular Colress cards, his Pokemon and some decent cards to trade. I even joked with said friends that I'd probably pull a shiny Charizard since it wasn't even what I was after.
Two boxes + Plasma Powered Decks were purchased, and despite not having the funds for more I instantly regretted not getting at least a third box. Oh well. Now after what felt like an eternity from anticipation, they arrived on my doorstep today! This is the first time I've gotten Japanese cards in about 10 years. Ohh, the things we do for collections!... *air grope*

It seems I was rewarded for my patience and my restraint, as these two beauties were uncovered from the depths: 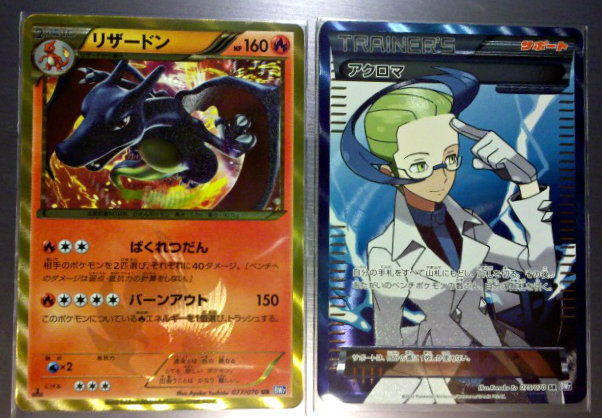 WHAT IS THIS I DON'T EVEN!

Seriously, how is that even possible?  I feel like the luckiest spectre in the universe right now! Charizard was pulled from the first box but as excited as I was, I thought I had jinxed myself out of getting the card I truly wanted.  Eleventh pack into my second box, and I turn over Akuroma. I did it. My hands shook as I carefully put him into a sleeve. "That's it! I'm done!" Spectre proclaimed as they stepped away to analyze the odds, recover from the awe and thank the almighty number 11.
So yeah... I think I'm off to a good start on my Colress collection. =D

Akuroma Stuff, Part 1! I managed to pull 3 Akuroma from my boxes (4 if you count the full art). OH that glorious Full Art... check out the bling. The holo is from the Plasma Powered Deck. All other cards I've just shown one of each, unless there was also a re-printed version from the PPD.  Daw at the advertisement card... does this mean we technically get Akuroma in every other pack? haha.

Akuroma Stuff, Part 2! The Magnezone line is really nifty. I also thought Plasma Energy and Frigate were relevant. Anyone think any of the other Plasma cards are? I'm a little miffed I only got one Plasma energy out of two boxes, but I really have NO room to complain, haha. Also, the actual Plasma Powered Decks, one open, one sealed. Akuroma was also on the neat little insert that came with the deck.

EX, Holos and Promos, oh my.  I got all the Rare cards in the set save for Victory Piece and the other two EX cards. The holos in this pic are my extra. T_T  I also got two Lugia EX and two Cobalion EX, which is insane given my SR and UR pulls. EX and Ace Spec do count as regular Rare, but I've seen boxes with only 1 EX and one SR. Four of the promos also arrived with my boxes, Skarmory and Plasma Ball both x2. I'd like to trade for the other if at all possible.

I don't know what I'm doing with the rest of the set (including the Charizard, but gosh it's sew pretteh) as the sole reason for my purchase was Achroma. There are SOME other cards I'd like to keep, but I'm really teetering on the edge of almost trying to collect the full set. It is a rather nice one. However.. if someone were to offer me more Achromas... >_>...eeehhhhhh.

Just a note though...I do NOT currently have sales permission, as I was never active in the past and nobody ever left me any feedback for transactions because this was before the cool and easy new feedback system the community has now. *sadface*


Also! I am looking to buy/trade for any Colress/Akuroma cards. I don't care if I already own them. If you want to get rid of them, I am a potential customer.