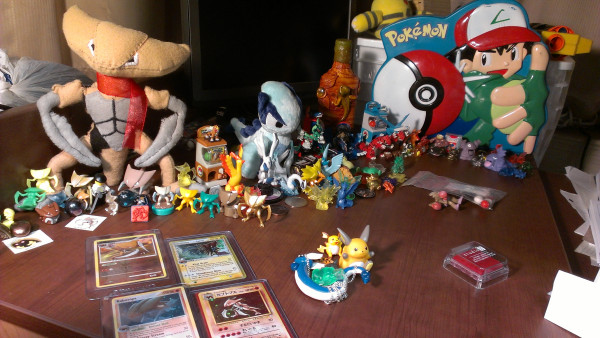 Firstly, my Kabutops collection! He's officially my favorite Pokemon of the bunch, and is supposed to be my main collection, but there's always so many cool things to get and buy from sellers that he's kinda been dwarfed haha nonetheless, I think I've a fair number of items ^_^ 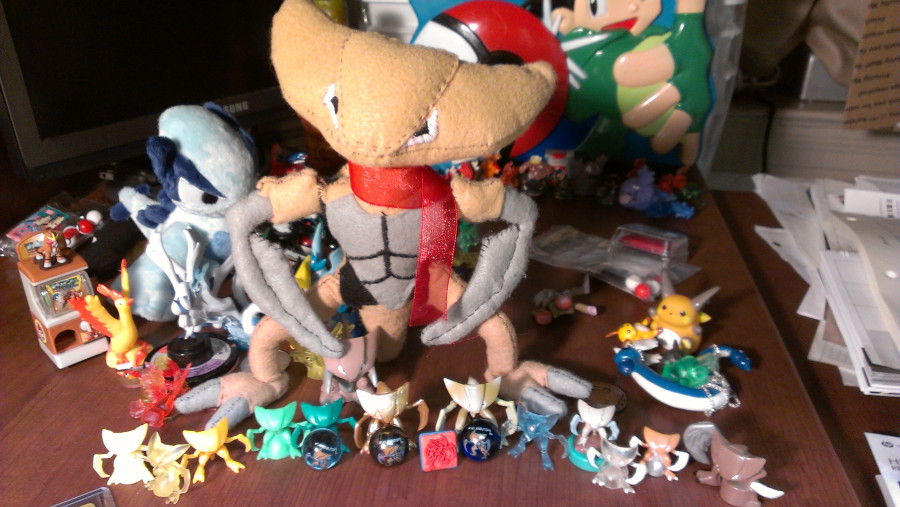 Sooo many minimodels! I lucked out when

kassia9 put up a huge sales post! There were 6 Kabutops minimodels in there! And, until that point, I had seen exactly zero being sold! So thank you! 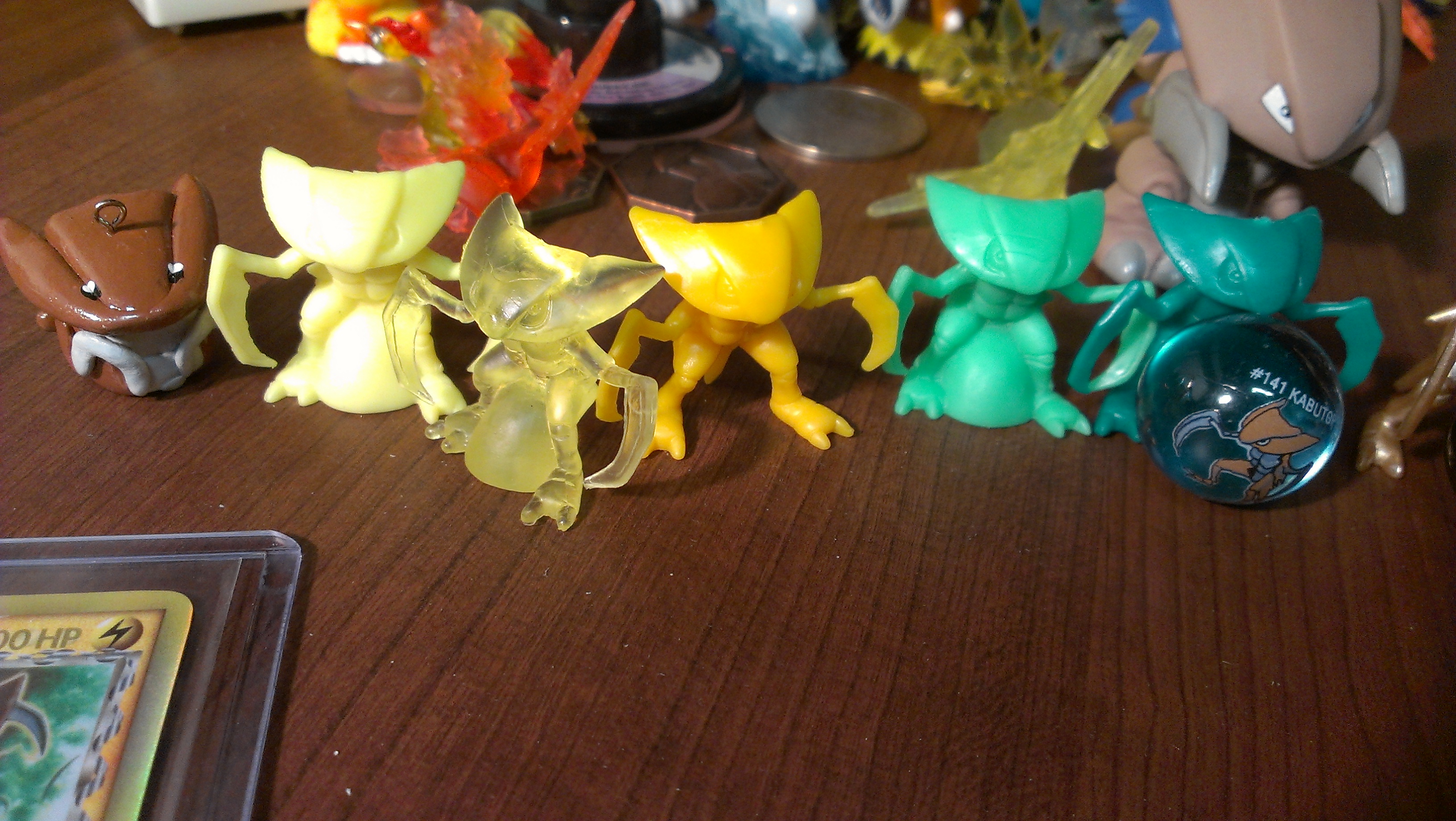 Firstly, there's a custom by

ushigofasweet , then a yellow, clear yellow, orange, light green, and dark green (it's the lighting that makes them look blue haha) mini models! That blue marble is one of the three I have of him :D 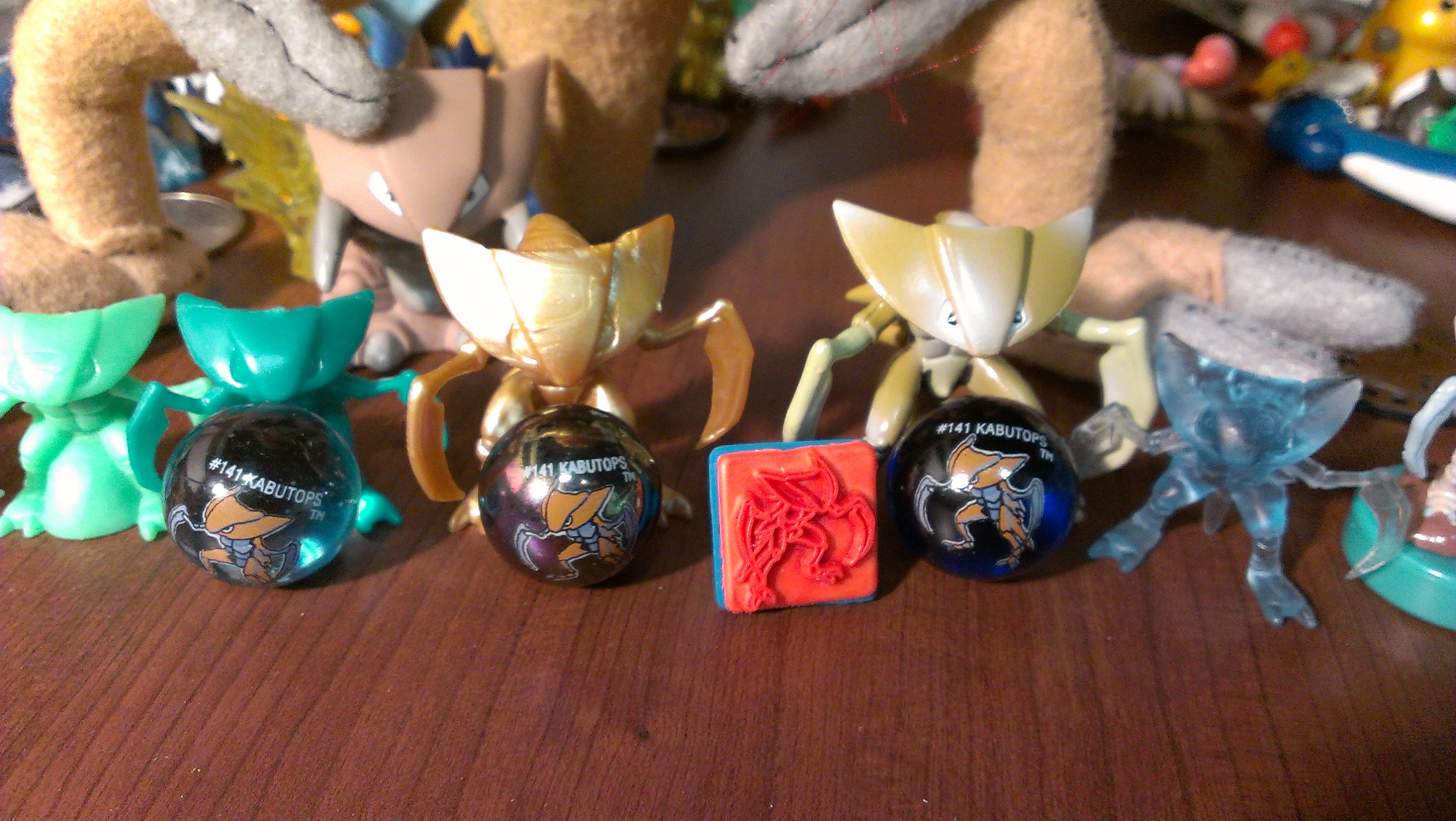 In the back is currently the only Kabutops kid I have, obtained from

schenzi, while the other two marbles were from

gengareric! That stamper is one of four I somehow now have XD I went a little crazy with buying roseart stamps for a while, but more on that later! The golden Kabutops on the left I saw first MIP in a large collection post from some user back in 2009. In 2011, I saw it again in a large sales post for $40! I don't it was sold, but the seller touted it as extremely rare. And then somehow, the gods smiled upon me and he came up for sale along with all of the other Kabutops mini models! :D So he's kinda like a grail get! Approximately the same size as the Tomy, so I call them the twins! 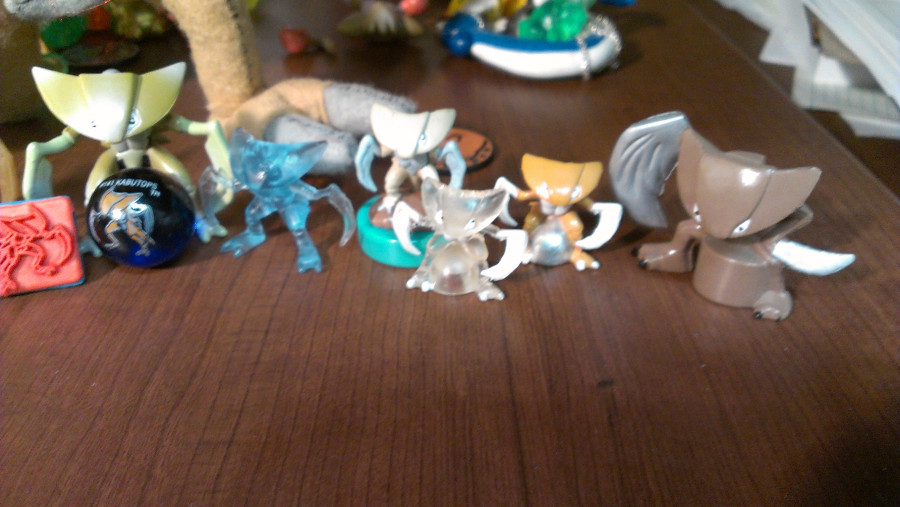 I think it was

happyjolteon who sold me that chibi stamper back in August, and the two little ones and the rightmost Kabutops may or may not be bootlegs, but I don't care! They're awesome :D 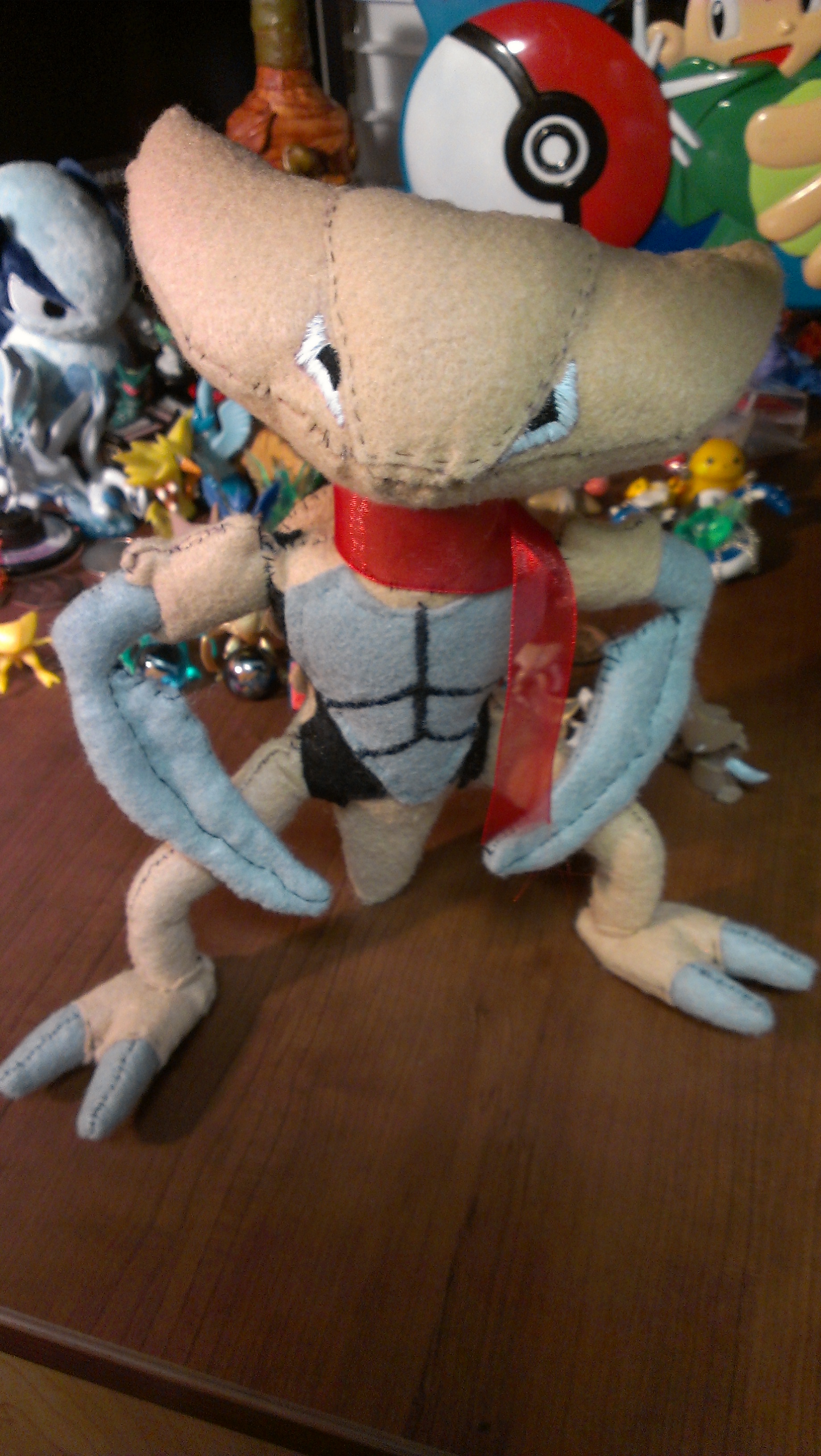 AND THIS GUY. I made him! :D :D :D completely hand sewn! :D Here's a shot of the spikes on his back! 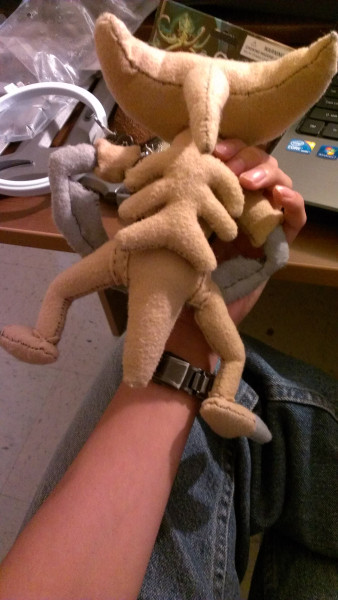 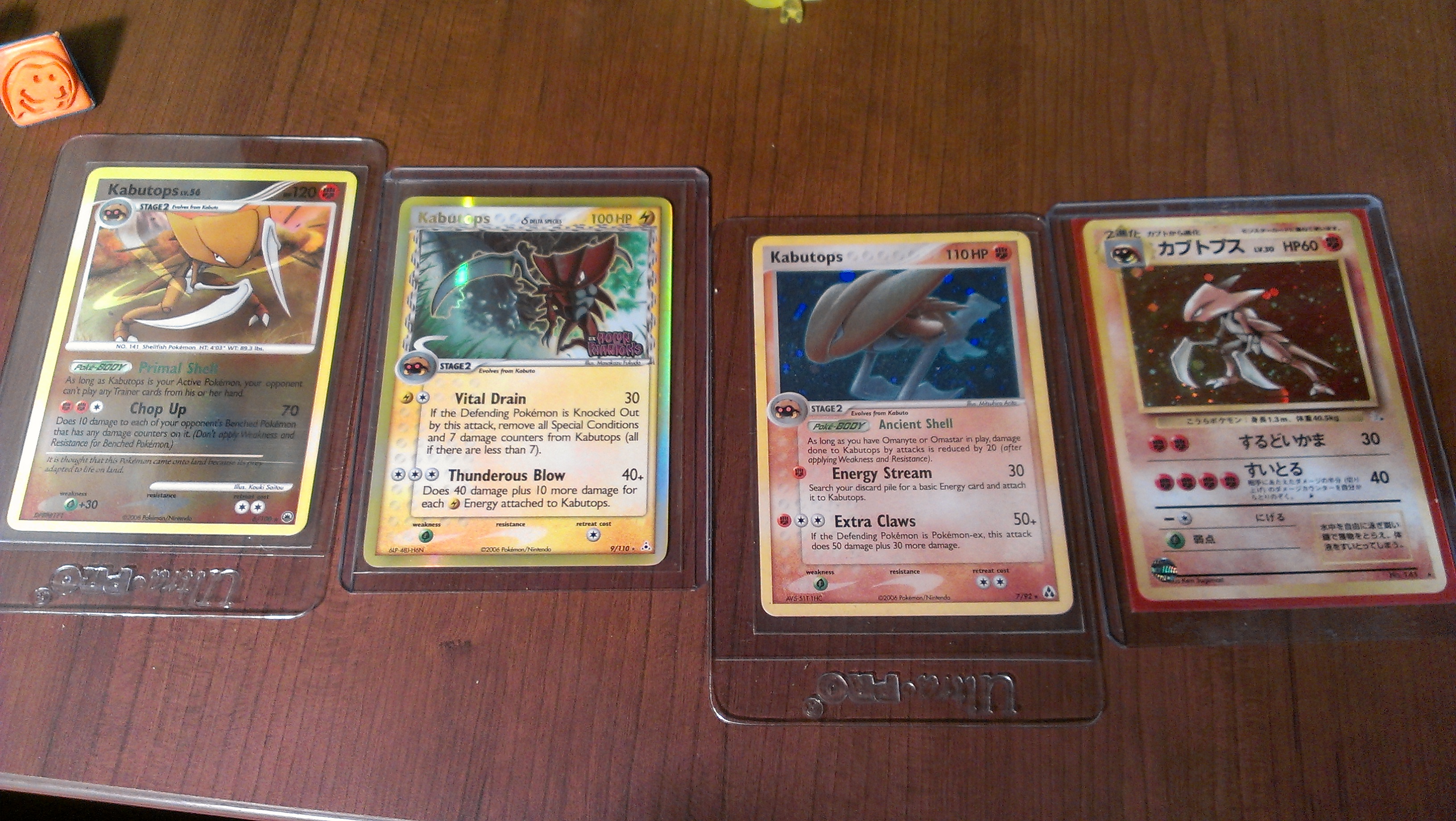 TCG! As Bulbapedia says, Kabutops only has 13 cards, which is a small enough number that I've decided to get them all! At some point, anyway haha they aren't a priority, but getting one every now and then for 2 bucks on ebay's slowly but surely completing the set! 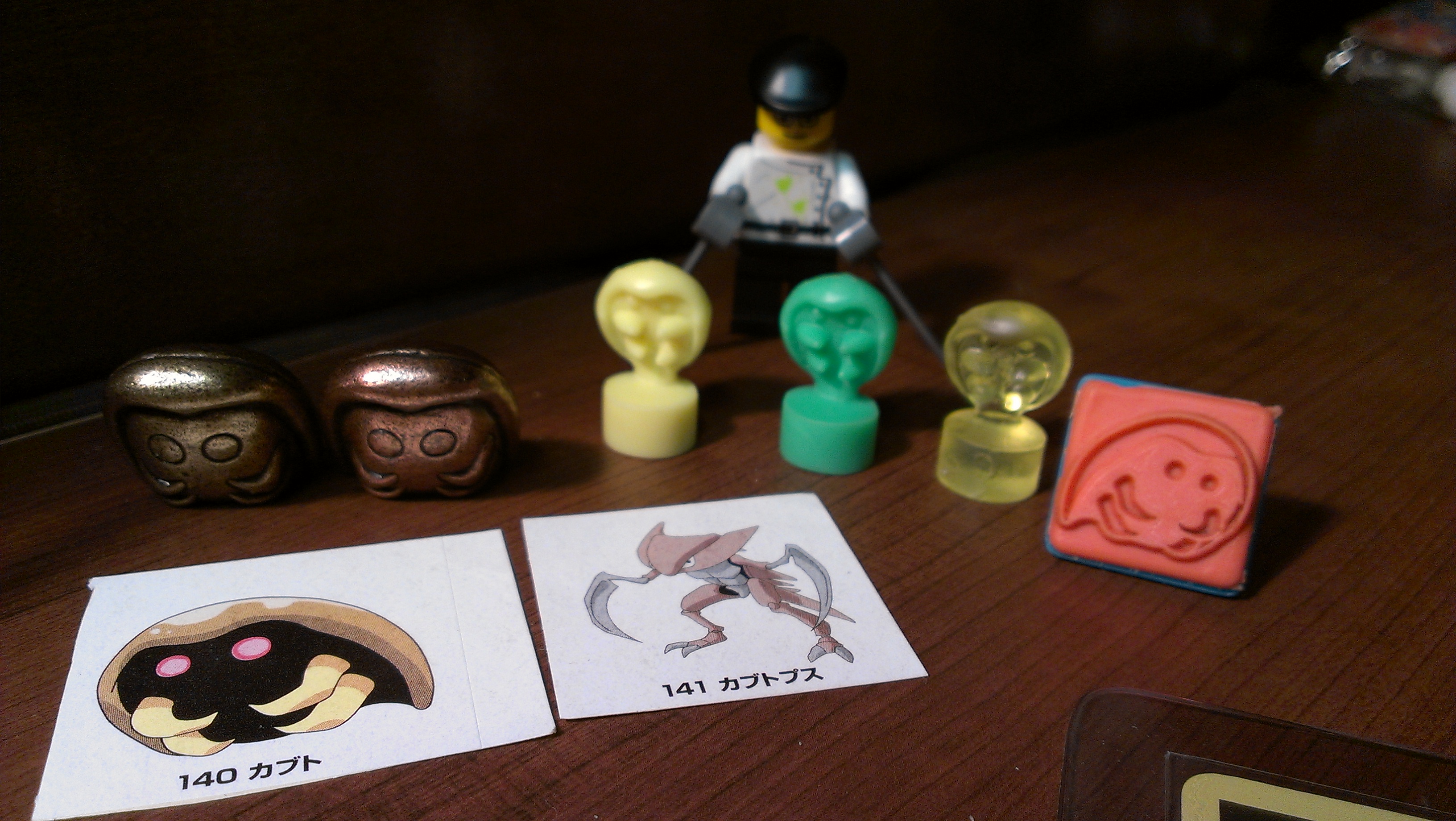 Kabuto! Because he somehow seems to come up more commonly than his awesomer counterpart, I've got a couple Kabuto things too :D a metal figure from

kassia9, and roseart stamp from ebay! 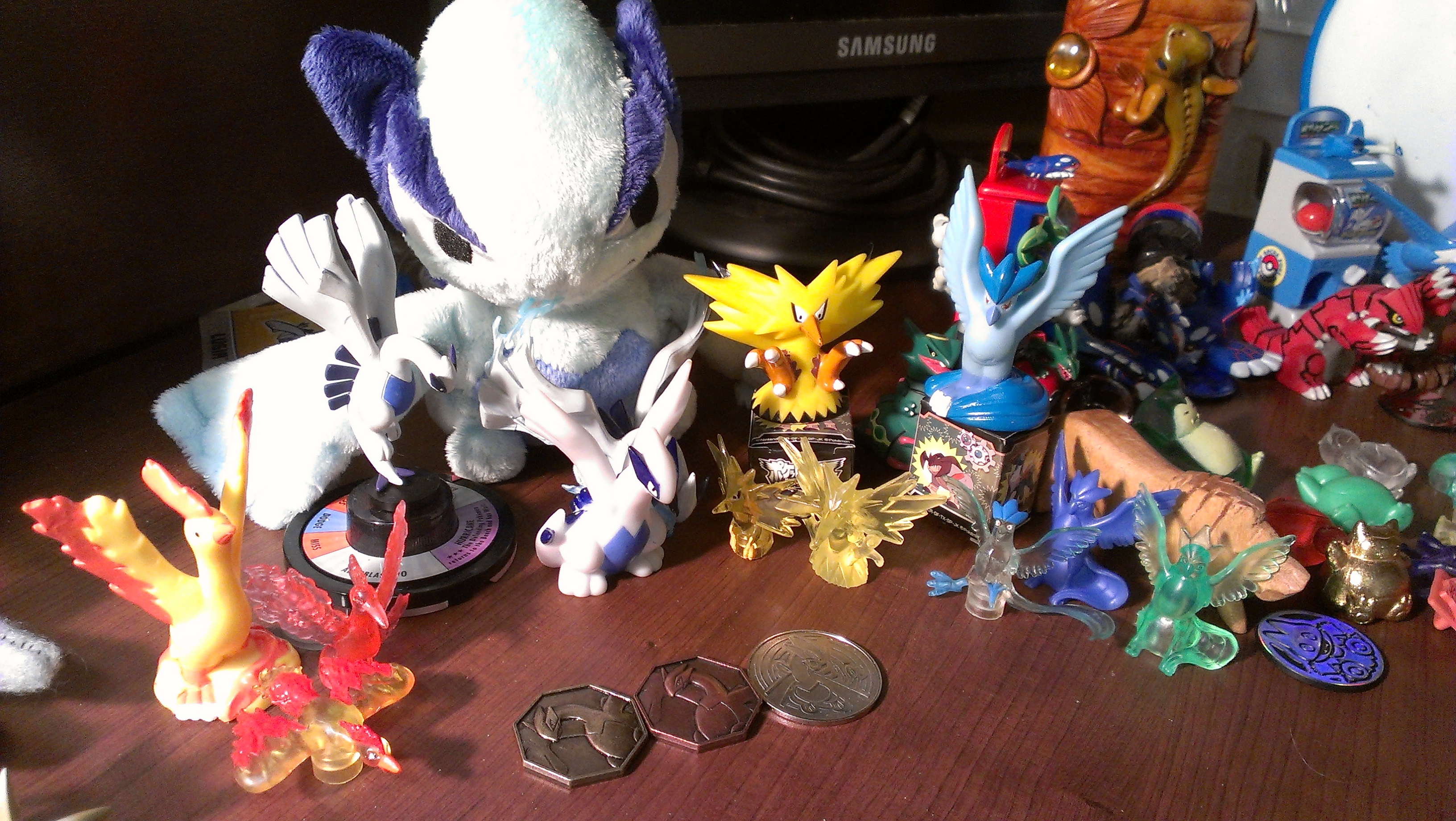 Legendary birds! I've always had a soft spot for Lugia ever since I saw it in Pokemon 2000, so I've been slowly collecting the three elemental birds and him, as an homage to the movie of sorts? There's his pokedoll from epcot (SO EXCITED WHEN I SAW THEM IN THE WINDOW), a TFG from

happyjolteon, and the metal TCG coin from ebay! All of the bird kids were obtained from

__sasami__, while the moltres and an articuno minimodel were from

killmeneko and her massive summer sales, and the other articuno and zapdos minimodels were from 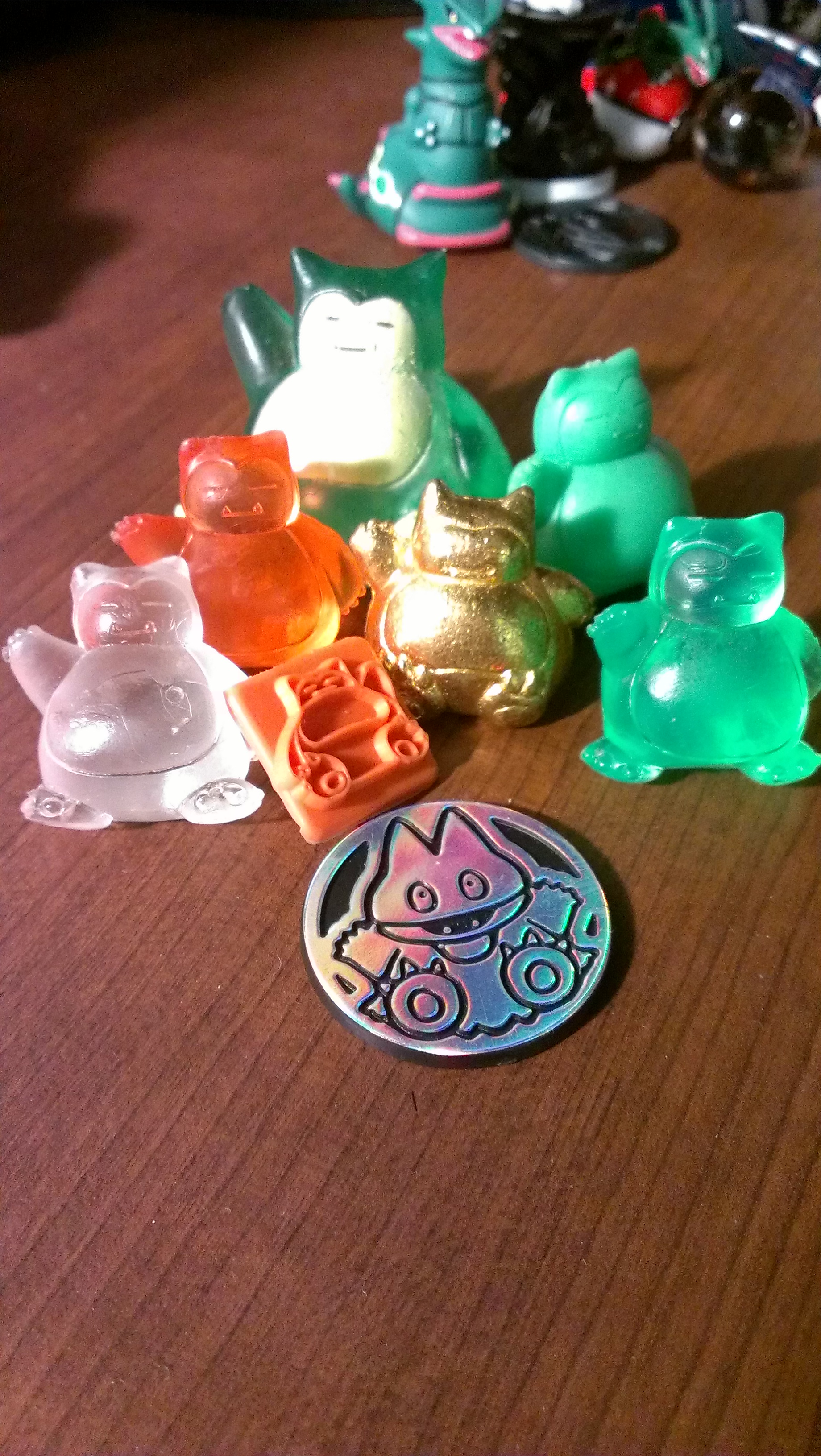 Snorlax! He's kind of an accidental collection, actually XD I got a bunch of mini models and the gold metal figure from killmeneko, the bootleg from shiny_vulpix, and the munchlax coin and stamper from ebay haha ^_^ 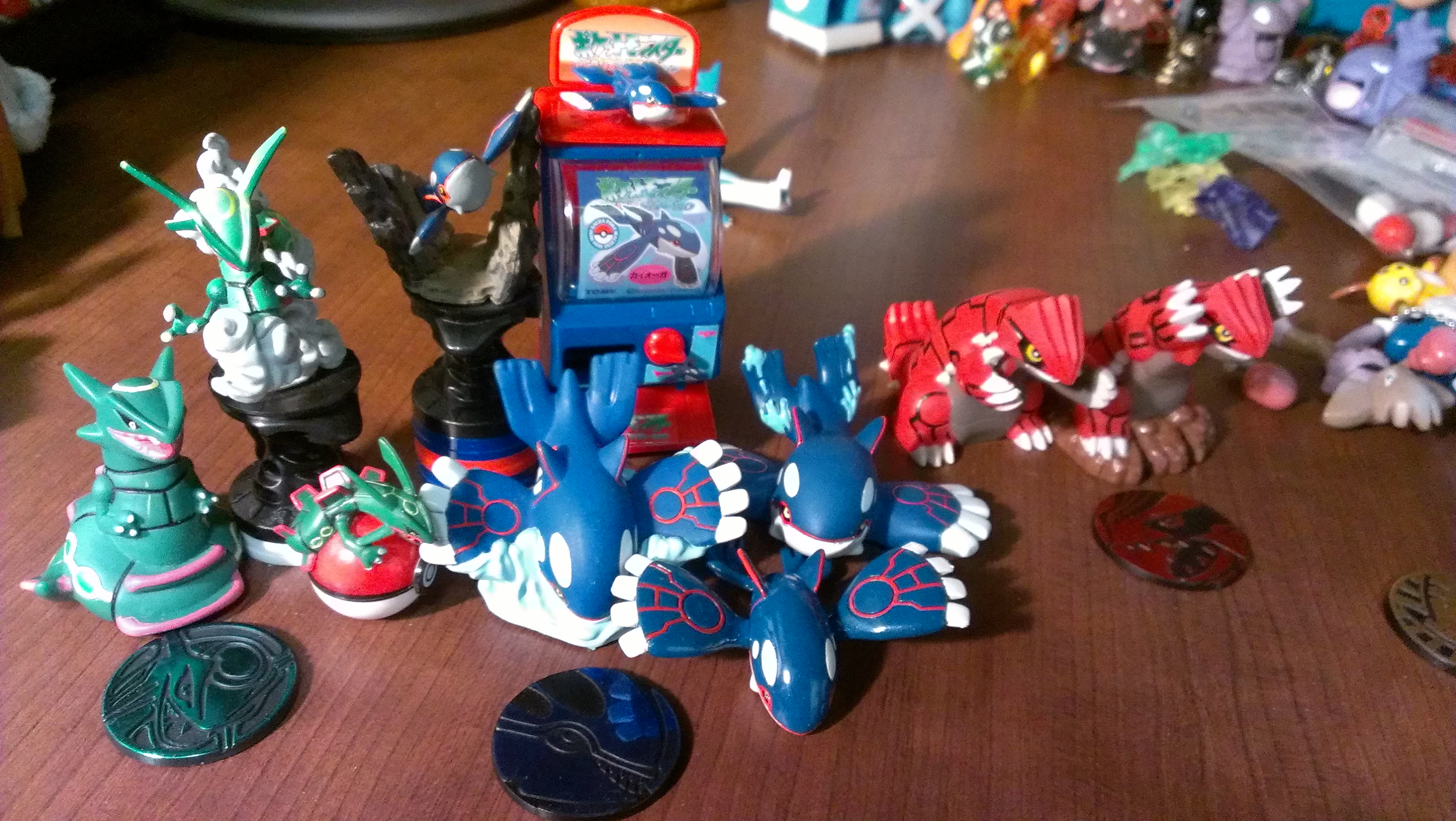 Weather trio! I always liked the look of these three - the lines on their bodies, especially! This was also supposed to be a small collection, but somehow

raz2b persuaded me or something into liking them more haha most of the kids were from __sasami__, the Rayquaza wobbler (kept me distracted from homework SO MANY TIMES) from

aleyina, the chess piece (super awesome looking, by the way) from

allinia, the Kyogre chess piece from

ivyaggron, its gashapon machine from

herar, and the three tcg coins from ebay! :D 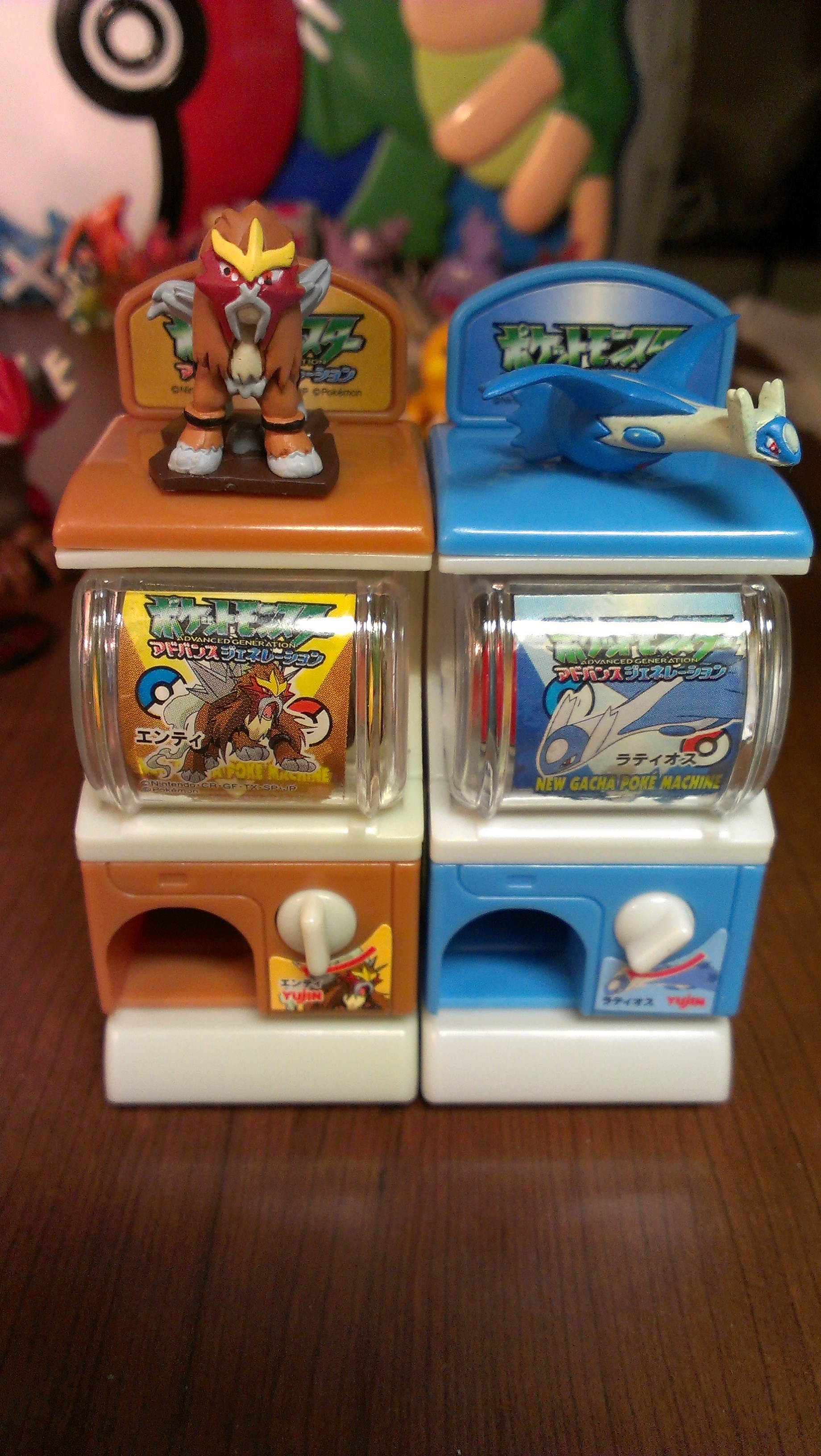 Speaking of mini gashapon machines, I got these two from a GB from

oi_m :D I put the pokeballs that came with them away, and filled them with gobstoppers instead haha 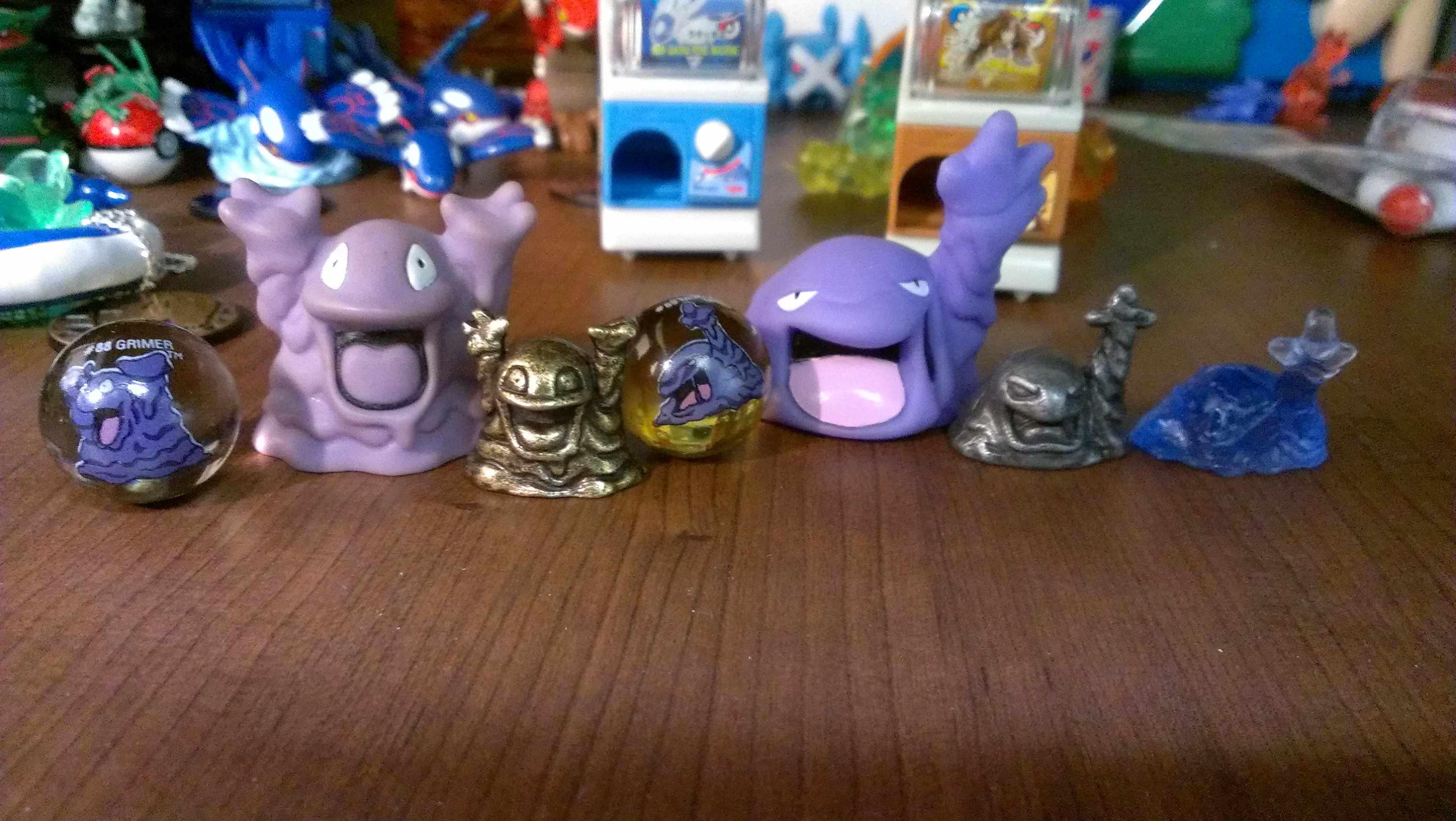 For some strange reason, in addition to Kabutops, I really really liked Muk as a kid. So here's my random homage to this strange creature ^_^ The two marbles I obtained from

oxymoronictonic, the grimer kid from

milomilotic11, the muk kid from

godudette, and the metal figures from

feraligroggles! :D I don't remember who sold me the muk minimodel, but thank you again! 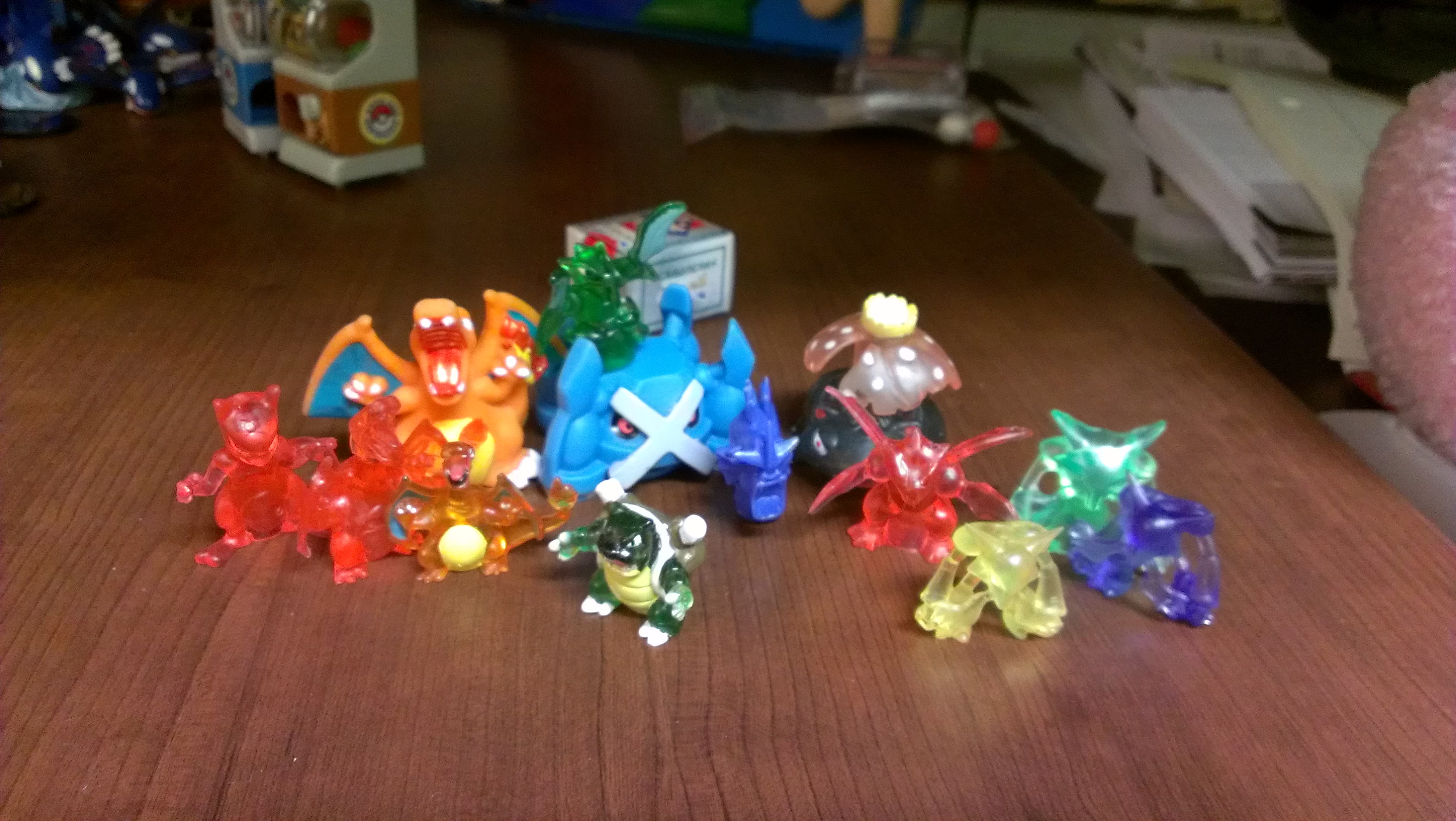 And everyone else! These are all of the random Pokemon figures and things that I bought that weren't really part of any collection, per se! There's little bootleg figures of the Kanto starter evolutions and green Scyther from

godudette, and the Mewtwo, Charizard, Scyther, Gyarados, and three Alakazam models from

killmeneko, and finally a venusaur bootie from

Oh! and lastly lastly, this! 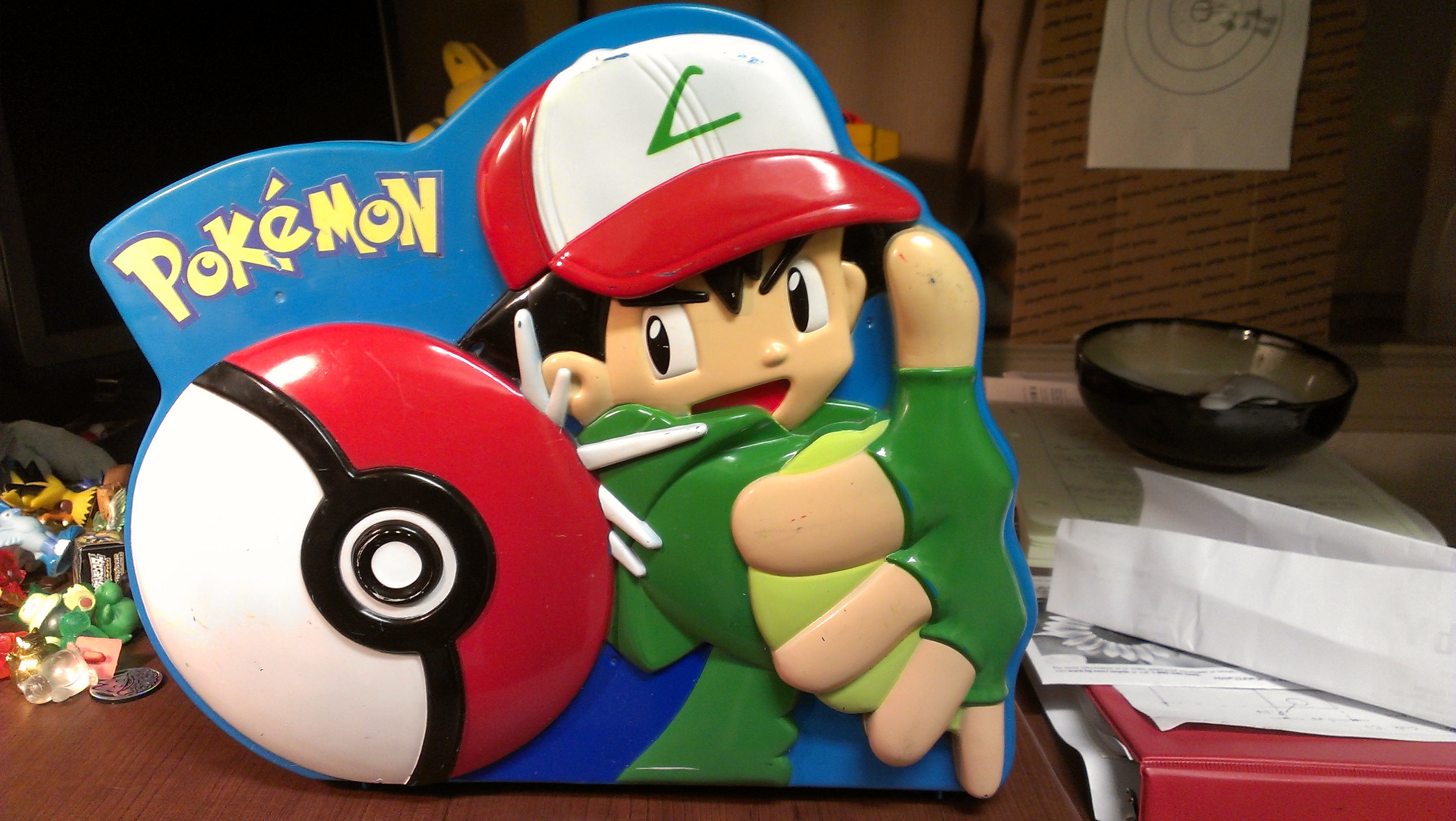 I won it in an ebay auction! Inside... 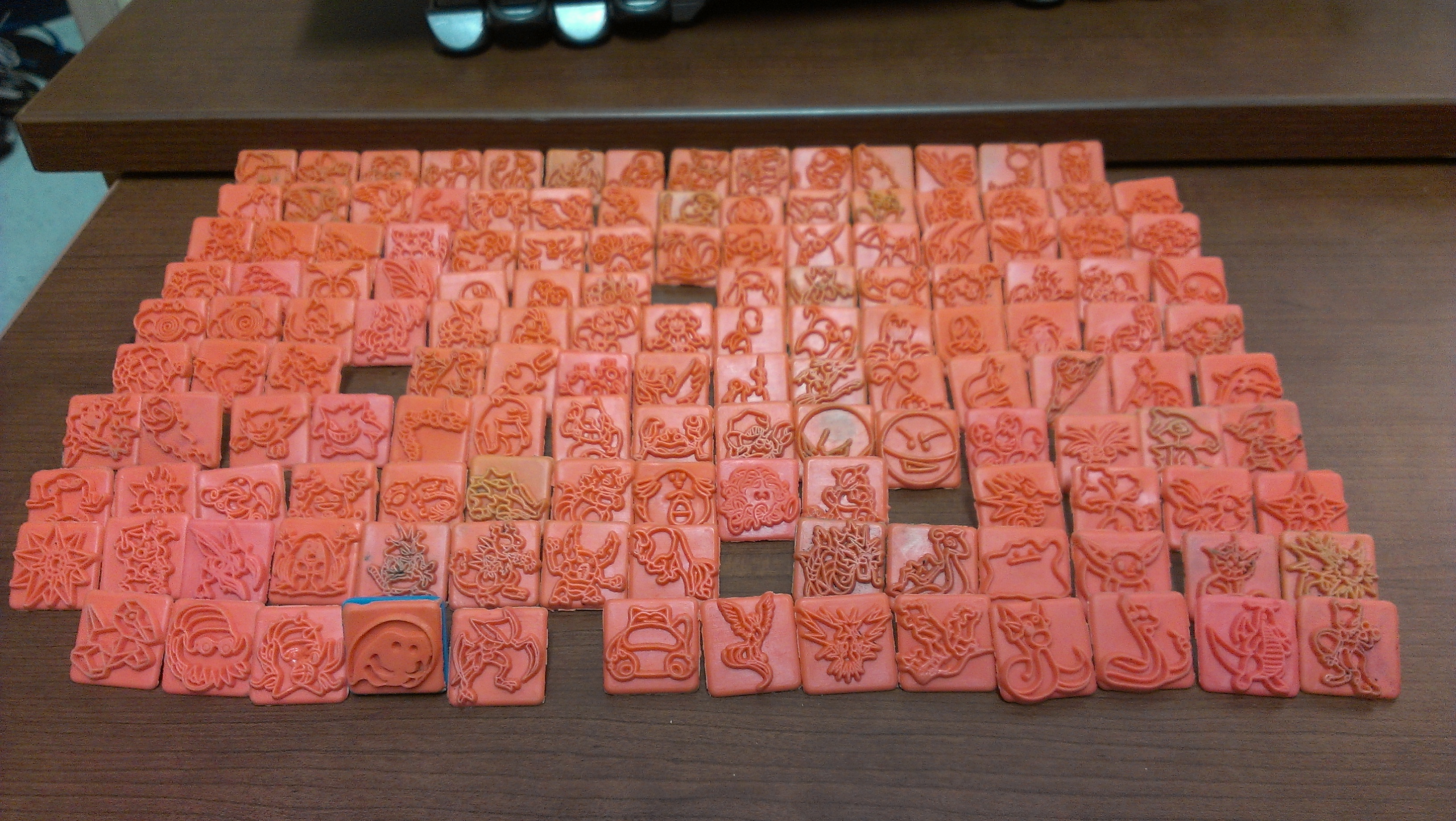 TONS OF STAMPS. I'm only missing Flareon, Magikarp, Aerodactyl, Persian, Horsea, and Slowpoke! Though, I did say that I went a little overboard with the stamp buying - this is only half of them XD After buying two small lots on pkmncollectors, I got another lot from ebay with 130 stamps. Shortly thereafter, my wonderful girlfriend bought me a brand-new and complete stamp set! so I guess I'll be selling most of these if I get sales permission hahaha

These are all of the above packages, minus a few! So many bubble mailers! 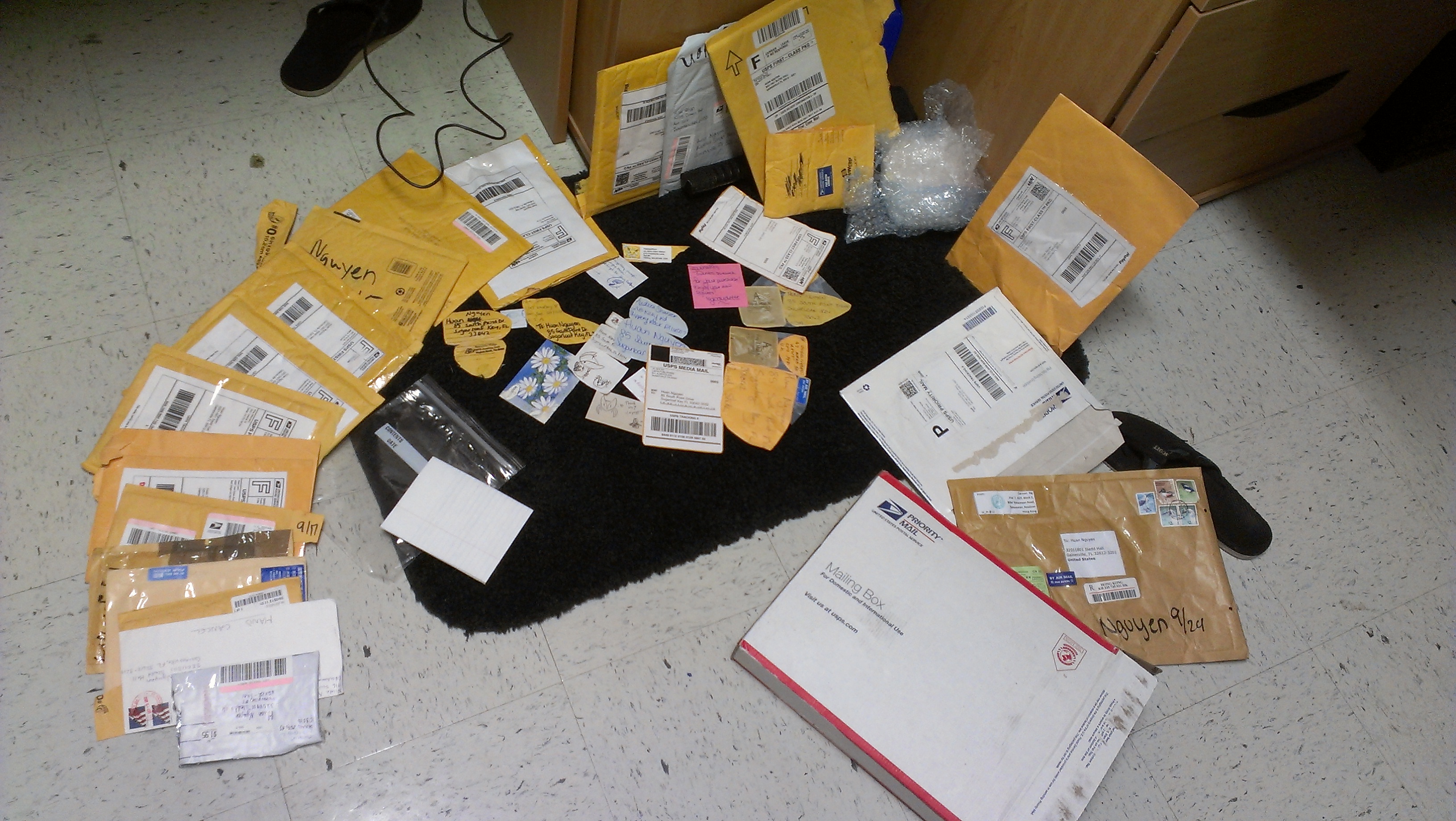 Thanks for reading! And to you awesome people who sold to me, thanks for selling! :D :D