Grail get! And new wants...

Obtained! A beautiful shiny Roselia kid! He's such a stunner...I love the colors so much. As the first shiny I caught in the game, Roselia means a lot to me, but I think he's also one of my favorite shinies, period. 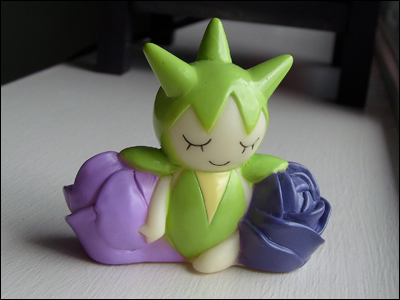 Now that I have him, I'm moving on to my next grail--the elusive shiny Gyarados kid. I know it's super rare but for whatever reason (probably because of its popularity) it's proving to be even more difficult to find than most shiny kids, so I'm prepared to pay an arm and a leg for that one.

There are also some other kids I'm having trouble finding, so here's a short wantlist:

If anyone has the above for sale, please let me know! Also, there are other kids I'm looking for but aren't as high on the priority list so if you have other kids for sale, I'd love to see a list/pics! There are still some common ones I need but would prefer to save on shipping for those and buy them in lots.

One (well, two) last wants--I'm looking for legit copies of Pokemon Emerald and Leaf Green for GBA. They don't have to look brand new, but I prefer the labels be in tact and such. There are so many fakes on ebay that I just don't trust it--I'd much rather buy from the community if possible!