Firstly, I was wondering if the community was going to have their annual Halloween contest this year since I actually prepared for it this time around. I'm not sure if I missed a post discussing the event and I'm blind or if its being skipped this year... I really hope we do one this year since I was really excited to see everyone's spooky entries since they made so much new merch to showcase. :[
Derp, they plan to do a contest as usual.
~~~~~~~~~~~~~~~~~~~~~~~~~~~~~~~~~~~~~~
Also, be on the look out for a mini sales update from me in the future. (Has to save up for Eevee explosion next month)

Lastly, I'm still waiting on more gets in the mail before I decide to make another update. So here's another want post, I've obtained a good chunk of it in the past couple months and I'm very happy about that. Thanks to everyone who helped me. :3
But I found a new love in the Zigzagoon/Linoone line and decided I want to collect all their plush and figures. :>
I blame it on Norman. Any help finding these items would be amazing!

I'm trying really hard to get the final zukan lines I need to complete my collection! :3 These are the last ones until they make more Unova pokemon.

I have every kid figure needed thus far, now I'm just after clear kids.
Lemme know if anyone has these guys for sale!

I know these are out and they're lotto figures and I seen a few group buys for them but not as a set.
I'm willing to pay tons of bucks for the whooooole set. :3

I've been preventing myself from not getting too attached to the thought of having this plush but dang it. I give up and NEED it. I'll pay big bux to anyone who is willing to sell this baby. I'd like him to be mint or at least have his tush tag in tact.

I'm still left in the dark about those toy factory plush toys, I really want to start collecting all sizes of the Emongas! I'm really excited that it got a toy factory plush. I can't wait to have a scaled collection of plush of my little sky squirrel. Any help would be appreciated.

Auuuuuugh, those stamps. These stamps are killing me......any help locating them or if anyone has them for sale or even knows anyone who does PLEASE let me know. ;A; Same goes for the settei!

I need this Slakoth Metal Figure in the following colors:

I've missed out getting this Groundbreaker 3 times, I was either outbid or missed a post showing someone selling one. I'd really like to get my hands on this beauty so if anyone has one please let me know.

Also, I still need 3 more claims on the exclusive MPC group buy! :O Conkeldurr, Tympole and Tranquill need some lovin' please give them a good home!

If you want some of these hard to find MPC's, now's your chance. They will be $22 shipped for US and $25 Int. shipped. :>
If we can get every plush claimed these should get to me fairly quickly and to you! Lets make this one happen. 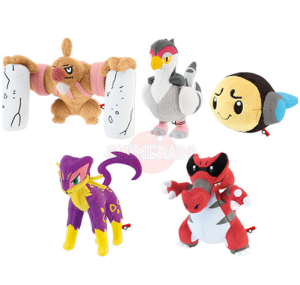