It's been a while since I've posted!
In my introduction post, I mentioned that I had several tomy figures, but that they were at home and I wouldn't be able to get a picture until Thanksgiving. Well, I went home early! I brought all my plush with me, so now I have a picture of my full collection! 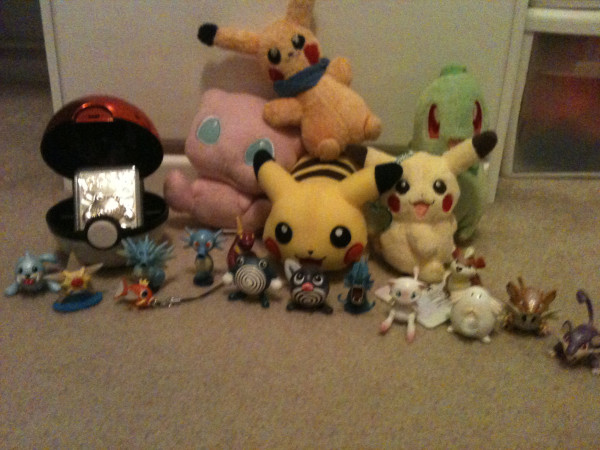 So the same plush from my introduction post (Kitty the mew, who's unfortunately a bootleg, which I found out later; Smile the laying down pikachu, Pumpkin the small "I l<3 pikachu"- she's the one with the blue heart; Chika the Jakks chikorita, at least I think she's a Jakks; and Sammy the custom pikachu plush made for me by my bestest friend ever, vulpes_canis!)

I think that all the figures are Tomy's: I've had them since I was young, so there's some fading on the paint, but no scratches or anything, and then vulpes_canis got me a magikarp time strap, which came with a venasaur bookmark, though I didn't think to include that! Does anyone remember the gold pokemon cards from a loooong time ago? That's the poliwhirl one! I've had it for a looong time, and my mom was awesome and got it out of the attic for me! I still have the box and everything!

I know I have more Tomy figures, an old pikachu plush, and a Tokepi figure that talks and sways, and some Burger King toys in the attic somewhere, but as of right now the only thing that my mom and I have found is my gold poliwhirl card!

So, that's my collection update! I'm going to be getting a job soon, so hopefully I'll be able to add some of my "wants" to my collection!