Hello everyone, I've gotten some new gets the past few weeks that I would like to share with you all before the X and Y merch comes out! Who else is anticipating the release of the games? It's hard to believe that it'll be less then a month before it comes out.

The accumulation of new stuff from the past few weeks.

I'll start off with a vulpix canvas which I won from SMJ. This is my favorite plush of Vulpix. My pet peeve for vulpix plush is that the tails of them are together like a peacock instead of them being made individually like this. She's so detailed!

Detailed down to the little pawpads <3 So cute!

Now here's a pic of mama Pix and her baby. I'm tempted to buy 2 more of the vulpix egg plush to give her a litter. it'd be a cute fox family.

The pokecenter Samurott plush, and it didn't cost me an arm and leg <3 My pokecen oshawott line was incomplete, and I have had my eye on the samurott plush for a long time, but everyplace i saw them sold they were $60-$80. I saw this guy relisted over and over and over on Yahoo! japan, and I finally put a bid on him. I had a strong feeling that the invoice would be high due to the shipping on him, and the day that came the invoice was only $27 all together. It was awesome <333 I saw in the auction that he seemed to have some sort of "defect" which is one of his whiskers always was down, but it gives him personality! 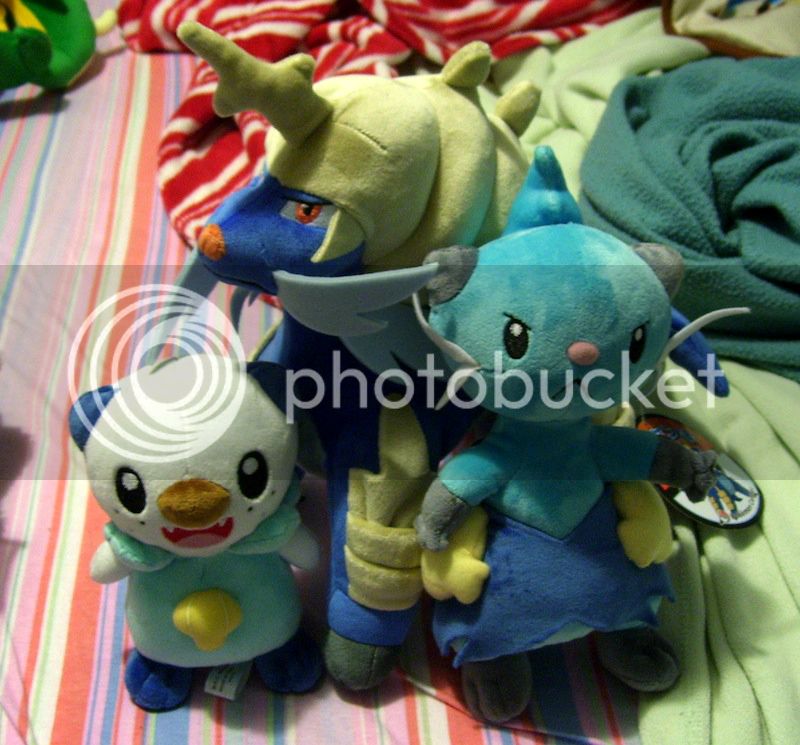 The sight that I never though I'd see; the line complete and they're all the japanese versions too.

Also along with samurott was the sylveon ippai figures! I prefer the laying down one, but the siting one is cute too. The ribbons aren't attached to the bodies. I never knew that the plastic was that flexible.

The pokemon center psychic type line stickers. I feel like I wasted a bit of money for nothing, but at the same time I feel happy that I got them both mint in package. The reason why I bought these is because my blue 3DS decided to die a couple of weeks ago (turned off by itself while playing animal crossing, and yes Resetti lashed at me -.-;), and it refused to turn on. After I got it sent for repairs from nintendo I was told that if my system was beyond repair, I'd be sent a replacement, but it'd be a black one since the blue 3DS was discontinued. Well after 5 days, it was coming back home, but I saw that the serial code was not the same as my blue one. I bought these stickers as a replacement for the old ones, since my Blue 3DS had the elgyem line stuck on it. Well after my 3DS came back I saw that it was my old one, and cried tears of joy that it was working again and that it was my blue one. It turns out that the main circuit board had to be replaced. My streetpass information got wiped however and I had to start over ^^; Then these stickers arrived, and it turns out that i didn't need them, but I'm gonna keep em, since they look awesome. Plus, hey alien pokemon stickers <3

Rattata and raticate tomys from a flea market. My friend and I didn't find much pokegoods, but she got a 1:1 giant meowth plush for $10. We scanned around for more pokegoods and found a booth that sold tomys for $0.50 each. I got these two because of the poses, but my friend got porygon, porygon 2, turtwig, torchic, and several others!

More rumble U figures and the pokemon DVD. I wanted the DVD for the Beheeyem episode. XD;

So far my rumble U figure collection is growing <3

I'm only missing deoxys, celebi, and mewtwo (and the secret shiny rares)

And here are my extras!

My next wins from ebay! I've eyed the Christmas Pikachu for a while, and won him in a lot with the backpack pikachu and this shiny pikachu hat. Santa chu is so cute and cuddly and soft and squishy!! As for the hat, I think it's a well made custom. I couldn't find any reminants of a tag on it.

Tomy Snivy from Toys R Us Express at the mall. I've seen this guy siting there for weeks. He had several loose and long threads on him, and that little piece of fabric on his nose you can see here. I still got him anyway, even though he was a little pricy.

slothyshroom His tail makes up most of his body xD

Sylveon movie figure pose from Sunyshore. I was surpised how fast she arrived.

Naked sylveon! I thought the bows were interchangeable, but they're not ;-;

Here she is on all fours.

And backshot. She looks so graceful.

After a while of experimenting, I managed to get her to stand up on only 3 legs by turning her head. the ribbons seem to balance the weight to allow her to stand on 3 legs.

Todays gets. My package from sunyshore has arrived with my Substitutes. My friend and I were anticipating their arival! We'll be playing around with them tomorrow!

Houndour pokedoll was returned to me from my ex </3 he is now a permanent part of my collection. Now it leaves 12 pokedolls for me to collect.

I've wanted to do this since the subbies were released. All in a row <3

Now I'll leave you with my movie pose Sylveon, being light on her paws.

Also check out my wants list. I'm currently on the lookout for Pokedolls Only at this point!