The tiniest get in the history of tiny gets-

Welp, how else can one describe that?
It was a lil somethin' something' I found in a store by me that occasionally sells Pokemon products.
Honestly it's rather minuscule, but something I'd like to share- 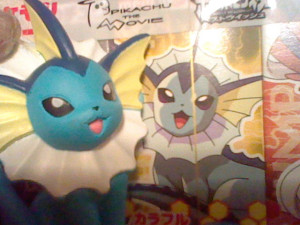 Okay, I might as well start with this simple fact. I grew up in a neighborhood of just about all Japanese people, thus entailing all the stores cater to Japanese. We have a dozen restaurants, sushi marts and you guessed it-! Japanese supermarkets! I often find myself visiting them about every week and prefer to shop there due to the simple fact that they have foods much more healthy for a well balanced diet-! Even their /candy/ is better! Speaking of which... On occasion they will have some themed candy in which mirror a fandom I am in. IE: Evangelion, Nintendo, Hetalia, etc... And obviously, Pokemon-! They always carry the plain gum with free stickers at the top for just a dollar, but many times they carry a 'variety pack' of assorted candies-! Often they come with typical characters on them, I usually think nothing of them since they usually feature Pokemon like Pikachu and a few Pokemon from Black and White... Never really caught my eye much? It was a sales gimmick for the games and featured Pokemon I didn't really care for... UNTIL TODAY-!!! 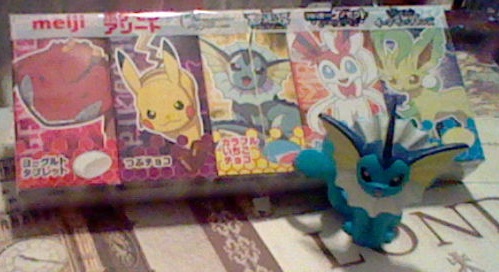 FINALLY-! One featured a VAPOREON!!! I've NEVER seen an Eeveelution atop this candy! I mean maybe someone else has Idk.. But I've kept an eye out on those candies for ever now! And finally! A Vaporeon!!! AHHHHH!!! I remember getting really huge gum once... That had a sticker inside and I /had/ to get the Totodile one-! As well as Giratina's, but I've NEVER seen Eeveelutions on any other form in these stores goodies! I mean, I've seen many stickers on gums, big packs and singles, but even the chocolate/candy variety pack never had them before-! Of course... This thing wasn't cheap, sadly-! A typical variety pack costs 2.99 USD, ya know how much this lil thing cost me!? /5 USD/!!! For freaking CANDY that's a LOT in these stores-! I mean? Yeah some stuff costs that much-BUT NOT FOR SUCH /LITTLE/ AMOUNTS OF CANDY! That's just a jip... At least, I have always paid not even 5 bucks for a much bigger sized chocolate bar by Meijii I believe the company is called-! And that is an expensive brand chocolate they sell in the J-marts I go into... So this danged thing cost me more than I /wanted/ to spend, but for the sacrifice of collecting... I-I had to get it... orz 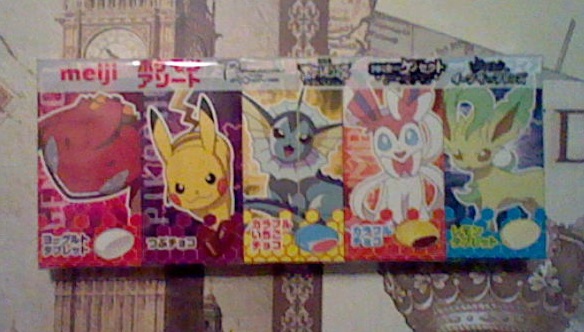 I admit, it ain't much, but it is to me-!
As ya can tell too on it, it also features Sylveon? The newer Eeveelution? As well as that bug Pokemon, Genesect? As well as something seen quite often on Pokemon products, Pikachu! Truth is-? As strange as it may seem... I'm hoping to trade the Sylveon box away for something? I mean obviously nothing big! But maybe a lil figure or stickers? Something like a dollar or such... To anyone who would want Sylvy's lil box? I mean, it's not too big- See the size comparison to my lil Kenji here; 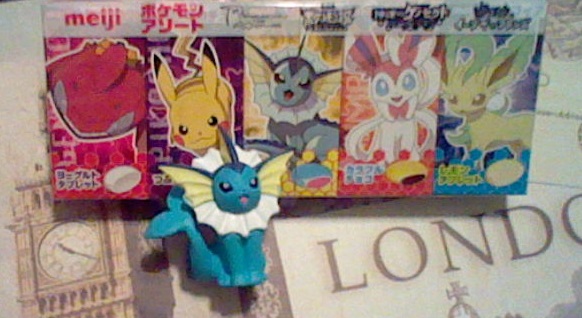 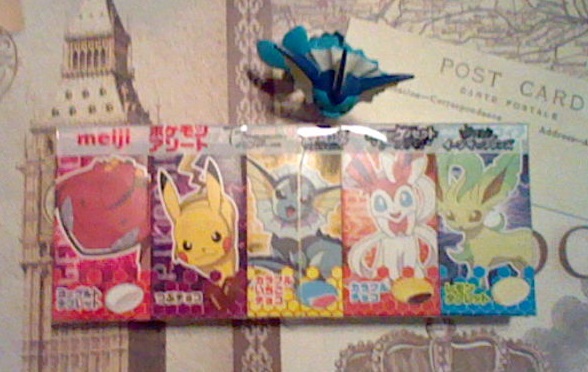 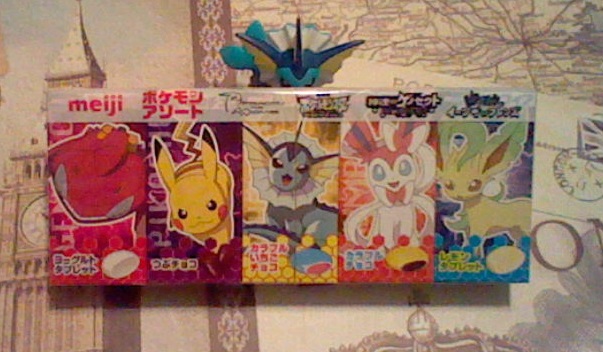 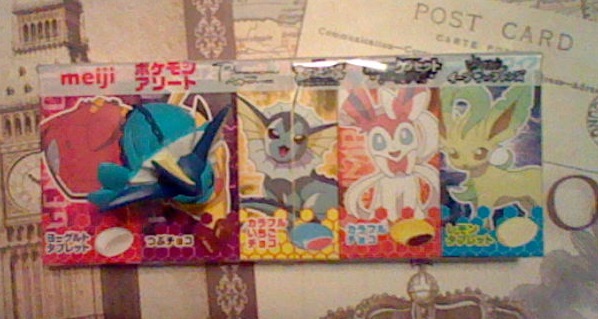 I actually don't want /any/ of the boxes but Vaporeon and maybe even Leafeon? {Trying not to start a collection of my Leafeon, but Audrey means a lot to me so Idek... orz I think I will start a Leafeon collection...} Clearly I don't want Sylvy, Pika or Genesect? So-! If ya wanna trade for em, I wouldn't mind~! Like I said-! Nothing big, cause it's a lil box- that and I don't have sales permission so! I can't sell it... Not to mention Idefk what to OFFER for the lil thing!? I mean, maybe in the future if someone wanted an entire box I could pick one up for them and mail it for a small fee? They have loads of Pokemon and other Japanese themed goodies! Not just anime but things like Hello Kitty and such forth. But anyway, if anyone wants one just let me know-! I really don't want either of them and also- don't expect there to be candy-! I kinda want my money's worth so even if no one claims them, I'll just be chucking the boxed probably anyway so... I'd like to eat my candy at least- I paid too much for this lil thing so I plan on enjoying it! >:I -srs face-

Thanks for ya time and take care, Poke peoples!