Hello everyone! I've got some new gets to share, which incluses several photos of the anticipated HQ Laying Eevee Plush! This week has been a cold one, and lots of snow was dumped on us, but surprisingly that didn't delay these guys from arriving.

Well start off with the exciting get I got in the mail yesterday!! He arrived in the middle of a large snowstorm yesterday!

I didn't get much this time, since I was paying off for Spheal, but he's totally worth the money and wait <333 We got a late New Years bonus at work, and I wanted to use it to get one of the pokedolls I needed for my collection, luckily Spheal happened to come into auction at the time. Thank you

Flailing about!! Just gah, I never expected to get this guy! He's perfect!!!! 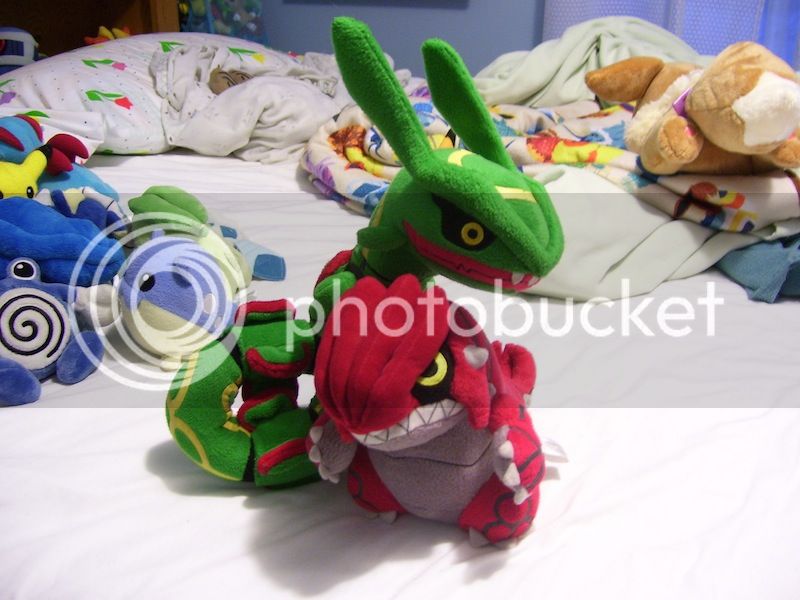 Next up is Oversized Rayquaza Pokedoll from

at_the_porno. He's alongside my oversized Groudon pokedoll. I didn't expect him to be so big!! O.O and tall.

This is the old school pikachu I was wondering the origins of in my last update. He was from SMJ with a tiny BIN price. I was expecting him to be half the size, but he's a bit bigger then a pokedoll. You can see Spheal as a size reference. Even though he's one of the earlier pokemon plush, he's got the shiny colors of em. lol

We can see the back. He has a glued on tail. He's pretty adorable.

Now for the eevee get from SMJ! I've seen people wanting to see pics of this, so I decided to take a few in many angles to share with you all, to whomever was curious about it <3 He's as awesome as the HQ Eevee.... but I think this is cuter x3 He's got the same material, and even a little button nose!

(Ignore and do not feed photobombing Spheal)

And size comparison to HQ Eevee.

And also side by side comparison too!

Now for other gets!!

The hasbro pikachu was from my workplace. I just saw a familiar yellow rodant just hanging around in the toys section out in the open, and I had to get him after work <3 I watched over him like a hawk. He's got a few stains on him, and a loose thread on his paw, but other then that he's in excellent condition.

As for KFC Vulpix, she is from a trade that I did with

methuselah31010. I traded a chocobo plush with them, which was from my last gets post. I've wanted one for a bit, but kept passing it up.

Other work gets! I saw these in the kids section as well, 3 days after I got pikachu! Some gen 3 and 4 pokeball keychains! I ADORE Aron!

Sleepy figures from SMJ <3 I had to get them! They're adorable! I have to admit, Chespin and Dedenne are my favorites in this set.

(Excuse the darkness, the light didn't do justice for these.)

And last but not least Rayquaza and Xerneas Zukans from

I LOVE the pose for Xerneas. It's so majestic.

As you can see, my Zukan shelf has run out of room for any others ;_; I'll have to reorganize if I wanna add more in the future.

Well, that concludes this collection pdate, Thank you for reading!!