An Introduction, Flailing About my Collection, and Wish List

I’m Emma, and I’m a newbie collector from the UK. I’ve played Pokémon on and off since Blue, but Y really woke me up to how much I’ve missed the games. I bought Y on a nostalgic whim…then didn’t put it down for days!

So, after playing it until my thumbs hurt, I searched the web for Pokémon things in some vain attempt to quell my renewed Pokémon addiction, and found this community. Looking at all your awesome collections helped me decide that I wanted to have some Pokémon merch’ too – and an empty wallet!  I decided on figures, since I like miniature things.

I’m hoping you can all help me collect my long list of favourites, and probably then some!

Here’s my collection so far!
My first foray into figure buying: 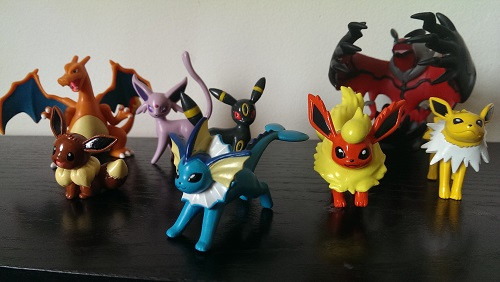 Charizard has always been my favourite starter, so I had to get one of him, and after Y I’m finding myself with a new favourite Pokémon in Yveltal. I’m not immune to the Eevee craze, though I had an “off” stage when the later Eevees came out, so I’m not quite as fond of them.

This group is part of the Eeveelutions Together set, but I’ve replaced that Jolteon as the set’s own one seemed…different. A little bit wonky and matte finished. I prefer this Jolt better! I adore Vaporeon’s pose – it was the reason why I got the set in the first place.

So, officially infected with the figure bug (and receiving parcels, YAY!), I bought more: 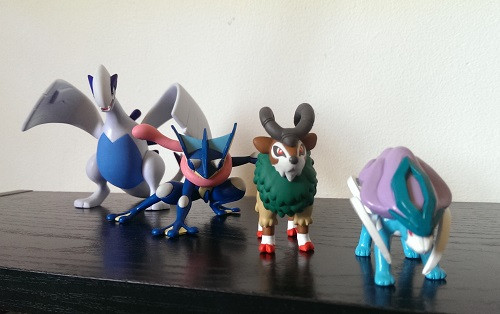 The second film has always stuck with me (Lugia's song often randomly appears in my head, still!), and eventually I’ll get the three birds, but for now: Lugia!  Suicune is my fave’ of the dogs, and after Y, I decided I needed some ninja in my collection, as well as some greenery. I normally default to the fire starter, and I don’t normally use grass types either, but Greninja and Gogoat are too awesome to deny!

To be continued…! (Obviously) X3

I’m not an “antique” collector, and actually prefer more of the recent designs/materials used in the figures. Also, I’d feel guilty taking older figures out of their packaging - someone else would appreciate MIP better than me. Hopefully you guys can help me find the rarer ones!

And here is how they are actually displayed (“Displayed” being a loose term.  I just like MountainGoat!Gogoat and Shadowy!Greninja): 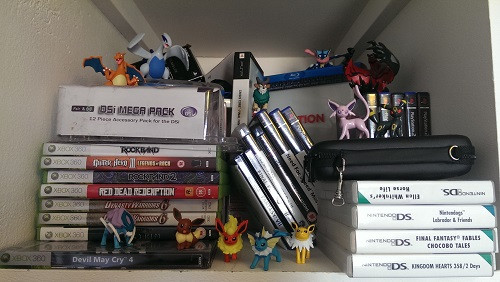 Thanks for reading! :D
PS: Sorry about the font changes, I have no idea how I did that!
Tags: collection update, introductions, wanted
Subscribe