A Month's Worth of Gets!

Hello.  Long time no post lol.  I have been super busy the last month and had no time to post all of my wonderful gets.  I have gotten stuff from the community, found things from cleaning, and went to a convention!  Now before you say "Hory Shi*;" know that this is seriously at least a months worth of stuff.  I did spend a pretty penny, but not all at once lol.  Now onto the pretties!

This is all the wonderful stuff that I have gotten from you lovely folks. 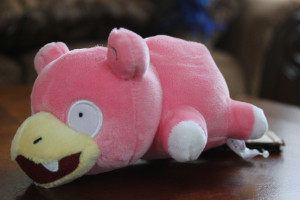 My MWT Slowpoke Pokedoll!  I love him sooooo much!  So derpy and cute! I don't collect Mudkip, but I couldn't pass up this adorable fluffy guy. 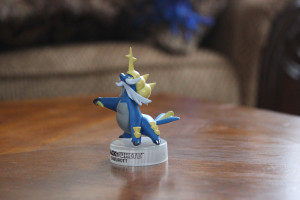 This guy was a freebie sent along with some stuff that I ordered from a community member.  I'm going to give him to my boyfriend :) 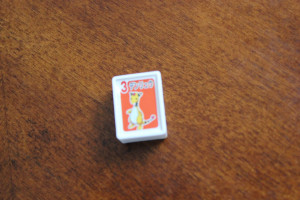 This is my beloved amphy item at the moment.  It is so hard to find ampharos stuff; and this piece is wonderful!

This is the charm that I have been hoping to get since I first started collecting Umbreon/Espeon.  I finally found one and it was a very reasonable price too!  I love it so much <3

I absolutely adore this little flume Mudkip.  Plus I love all kinds of straps and charms xD

This is my third Pokemon Time item!  I am so happy that I can find it.  I want to collect Pokemon time too.  I just don't know how to display clearfiles.  If you have any suggestions or ways that you display them, I would love to know!

And last, but not least [for my comm gets that is], is my Umbreon and Espeon Kids.  I especially love this pose of the two.  It makes them look like they are howling at the moon.  Love it!

This is more of just a regular get, but I figured I'd put it in this category.  I work for a company that sells anime goods(including the occasional Pokemon plush).  We got these cute buggers in and I just couldn't resist.  The tail is loose and boings all over the place.  Hes so chubby and cute and ugh i love him!

This is from the recent convention I went to.  At Anime Detour every year there is a panel called "The swap your fandom swap meet."  You can set up a little like stall and display goods that you do not want anymore.  You can trade people for their things, but no money or bootlegs are allowed.  The next few items are all awesome finds at the swap meet!

This tin isn't in perfect condition, but is beyond awesome xD

I got a huge stack of Pokemon cards.  These are just the coolest out of the bunch.  The suicune and entei card is actually two cards that are halves of one "Legend card".  I had never heard of these, but they are pretty cool.

Along with the TCG cards, I also got some movie cards.  I have a pretty big stack of cards with shots from the first movie, the original anime, and some pokedex cards.

So I found the strap and even though I already have one, I wanted another lol.  The Sceptile and Entei are little sliders.  I guess they were used in some sort of spin off game[ kind of like marbles].  I thought they were cool and I might have to look into this game.

This was actually just given away to me at the swap.  They didn't want it anymore and didn't really want anything of mine, but saw that I was getting all the cool pokemon stuff.  I think I know what I'm doing tomorrow.  Even though it is VHS and not good condition, I still love this movie xD

This is a super awesome deck box.  This was one of the first items that caught my eye at the swap.  It came with a card divider with the same art as well.  Such a nice art of Moltres.

I have a bunch of these tattoos already, but hey they are only temporary and I'm too chicken to take a needle to the arm!

These little square stickers are amazing.  I have a couple with screen shots from episodes and then almost all 151 original pokemon like the Jolteon one.  The Dialga is just a card with what I would assume is a dex entry on the back(lol I can't read Japanese).  I actually didn't know about the Dialga being in the deck box and went to return it to the owner or ask  if she wanted another manga or something for it.  She said no and was just glad to be getting rid of stuff.  People are amazing sometimes.

This is a little bank.  It has no key and the latch is broken off, but other than that it has no dents or scratches.  It looks really cool and I just love it even though it is a little broken.

Cute little book.  It was brand new with the store sticker still on it (lol and yes it is bent so you cant see that it actually is more than a mere.99.).

This book has information on mostly cards, but some of the battle figures and things like that as well.  It's pretty old so it has all the older stuff.

I have no idea what this things is.  It has two sides (second side pictured next).  I think it is just supposed to be a poster.  I didnt want to open the package though incase it may be valuble.

Second side to the thing xD

This I bought in the dealers room.  It is an MPC.  I don't see these very often, so even though I paid a little more than what I probably could have gotten it for,I really wanted it.

I knew that I had the red and yellow ones, but I totally forgot that I got the rest too.  I was looking through my suit case and found these guys.  I remember now that I got them in an artist alley at a con in Texas.  *sigh* so cute.    Well that's all for now!  Was that enough gets? lol  Thanks for reading!