As some of you may know, I have been having a pretty rough time for a while now. Some of these grails I've gotten have really helped make up for it all though. What did I get!?

Sneak peak! (This and much more under the cut!) 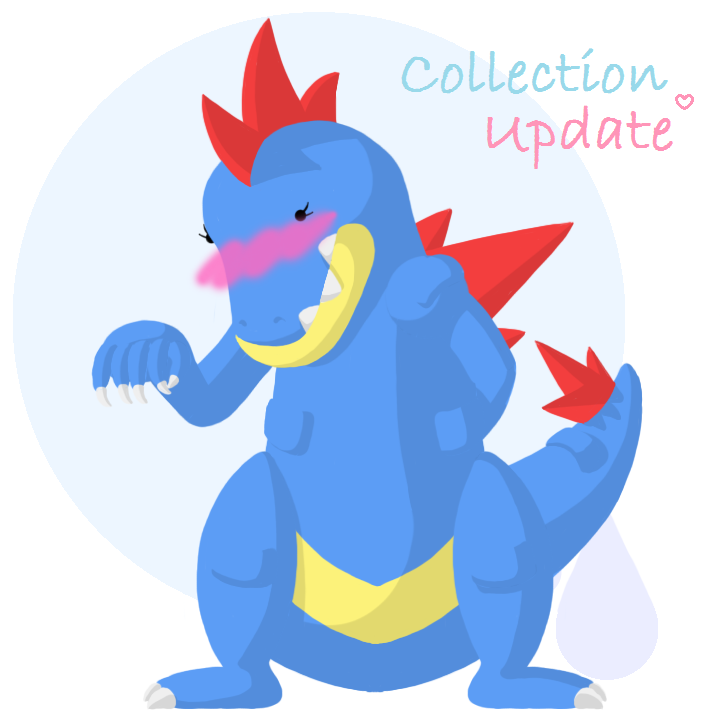 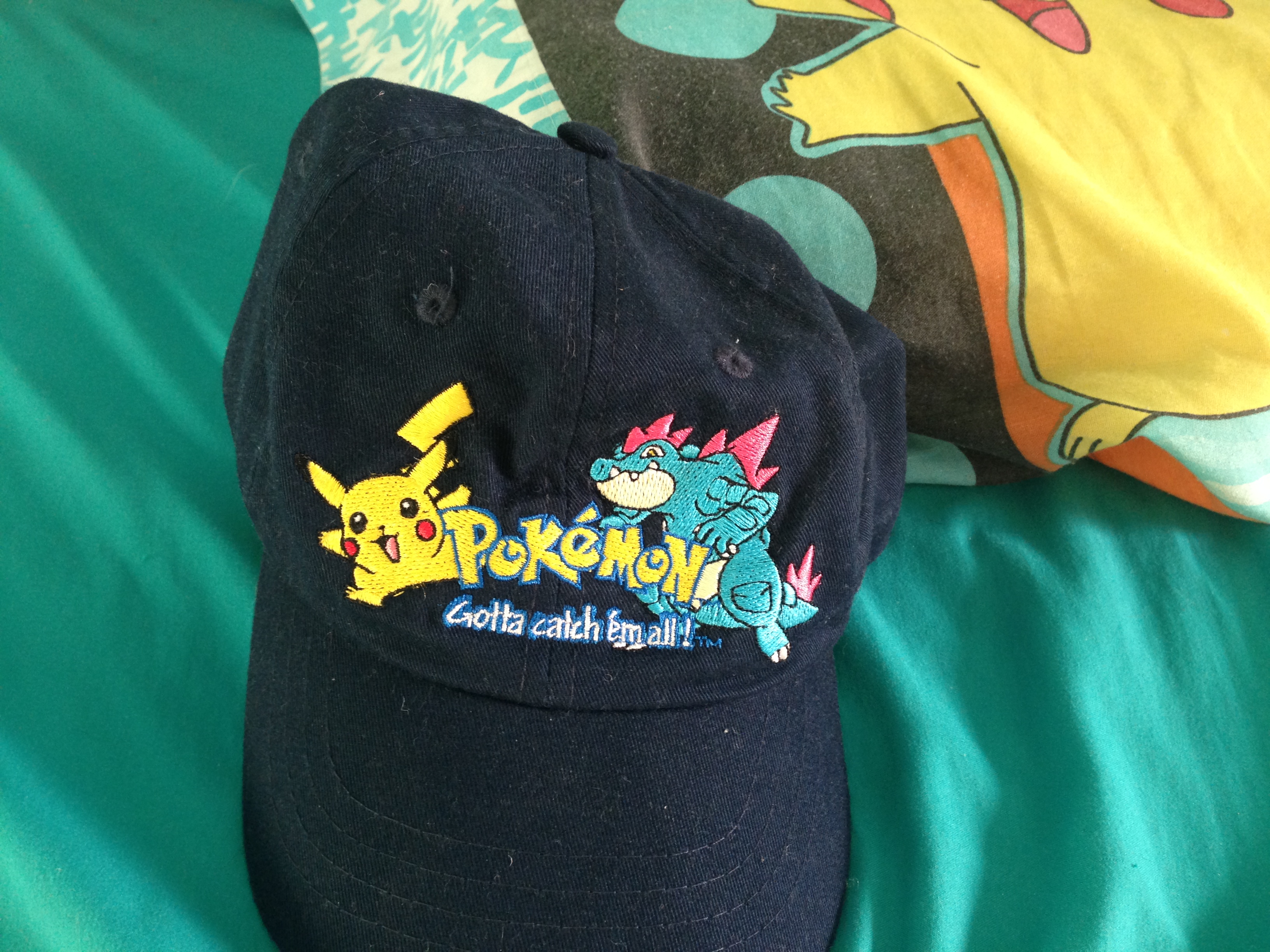 First up is this super cool hat I found! I had always seen vintage hats like this with other pokemon, but never thought I would find a Johto gen hat. Much less one with a Feraligatr on it! I love random stuff like this <3 But it's not the only apparel I have. 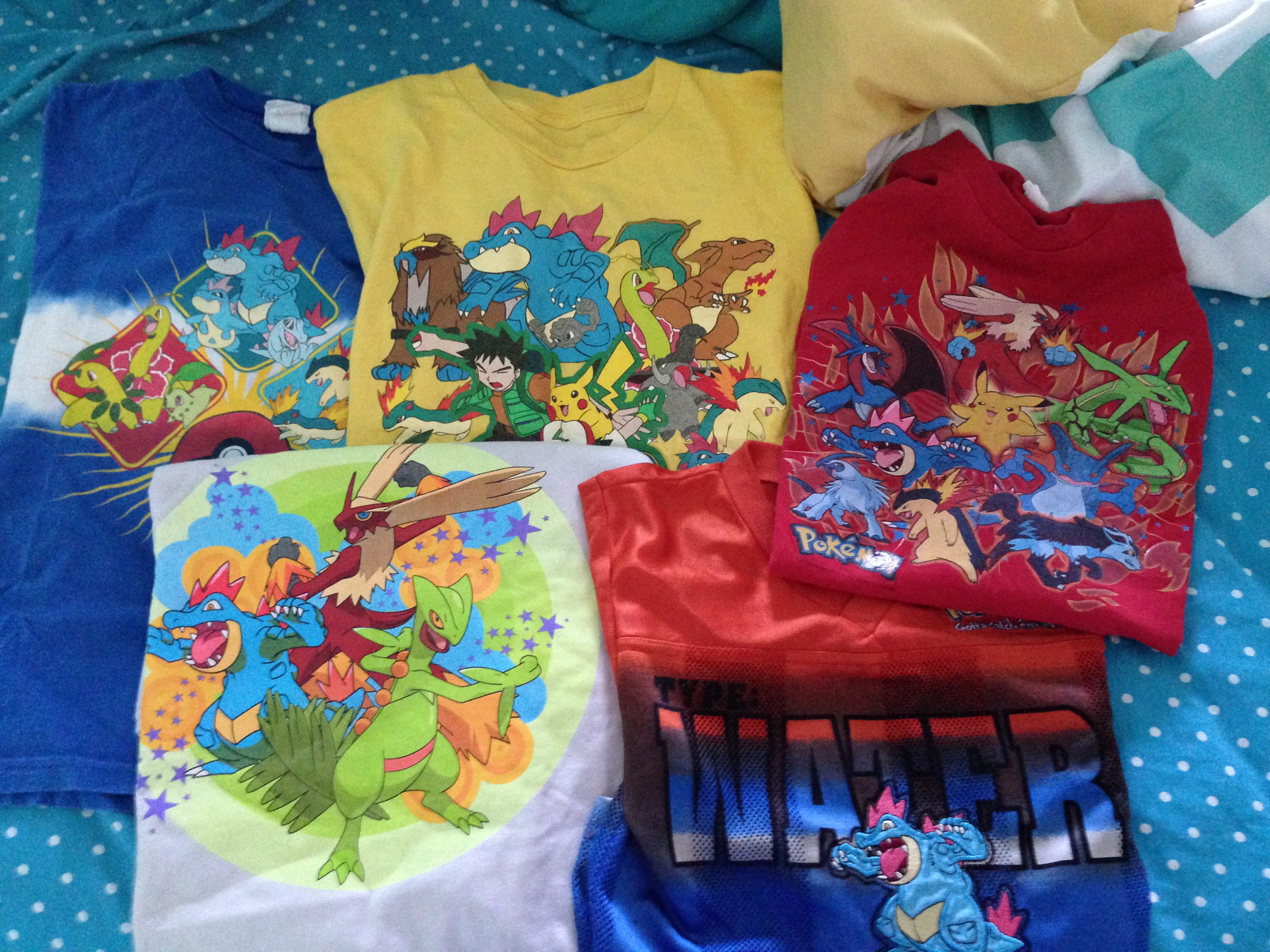 I also have all these shirts! Only the gray one, The Yellow one, and the blue tie-dye one are new, the red and the jersey I already had. but here's everything together. The grey one is HUGE. It says it's an XL size, but it's like a tent on me. The yellow one is pretty big too, I can definitely fit into it. It's always amusing to find cool old clothes like these that actually fit. But I'd still never wear them around for fear of wear and tear. 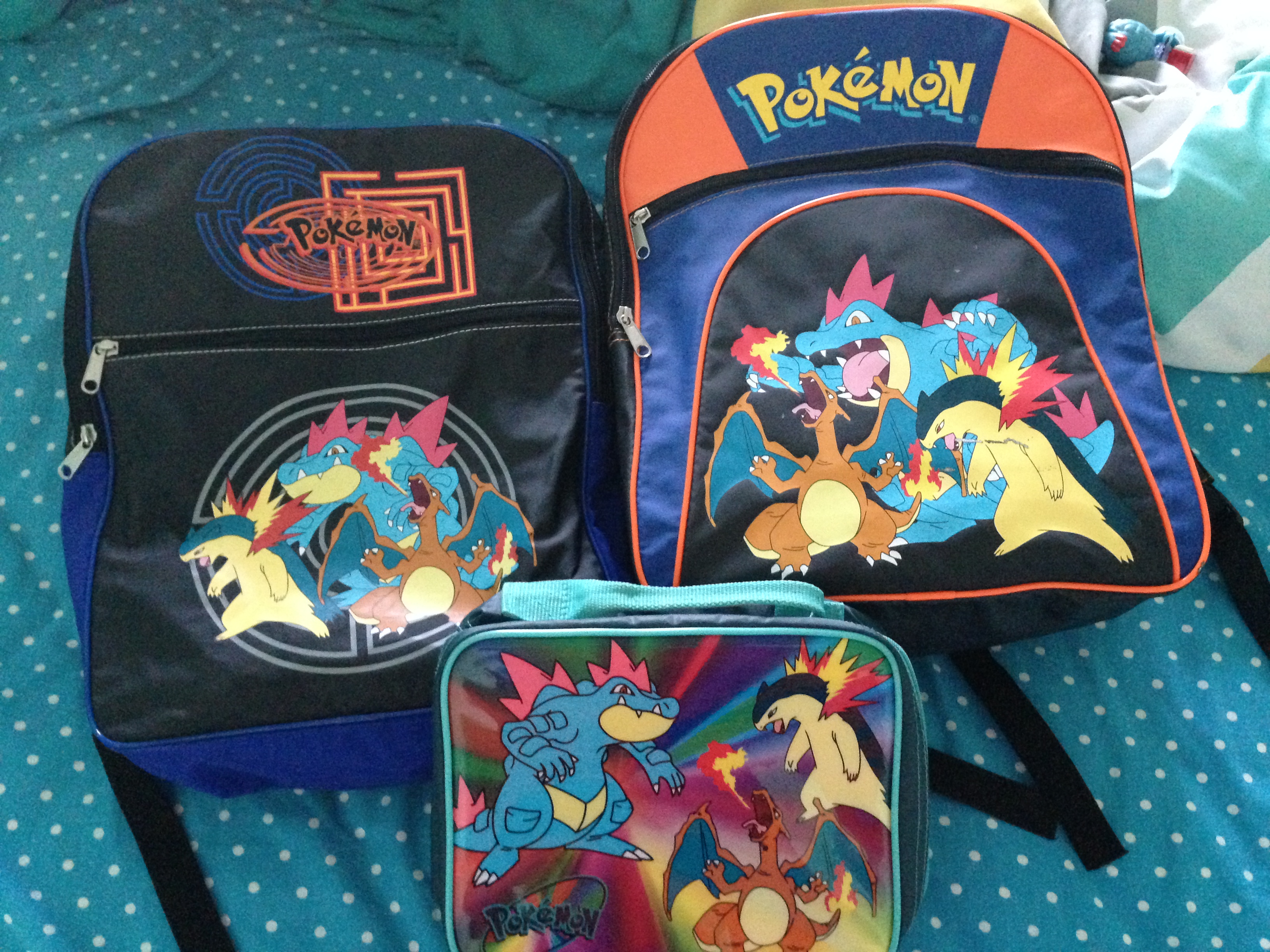 With the shirts, the hat and these backpacks and lunch box, I'm ready for school! lol yeah that was lame, sorry. But Both of these backpacks are new to my collection too. I threw the lunch box in the picture because it looks like it goes with this set? I'm not sure what's with this weird paring of charizard with typhlosion and feraligatr.. I feel like it should be meganium? but maybe meganium just didn't get enough love ;~; I don't know. But here are 3 separate cases where they used that weird pairing of pokemon. And also the Pokemon trademark logo looks weird in these too! But they are all 3 100% official. Tags and all. One of them is made by play by play, so maybe that explains it.. I don't know. I still think these are super neat though :> 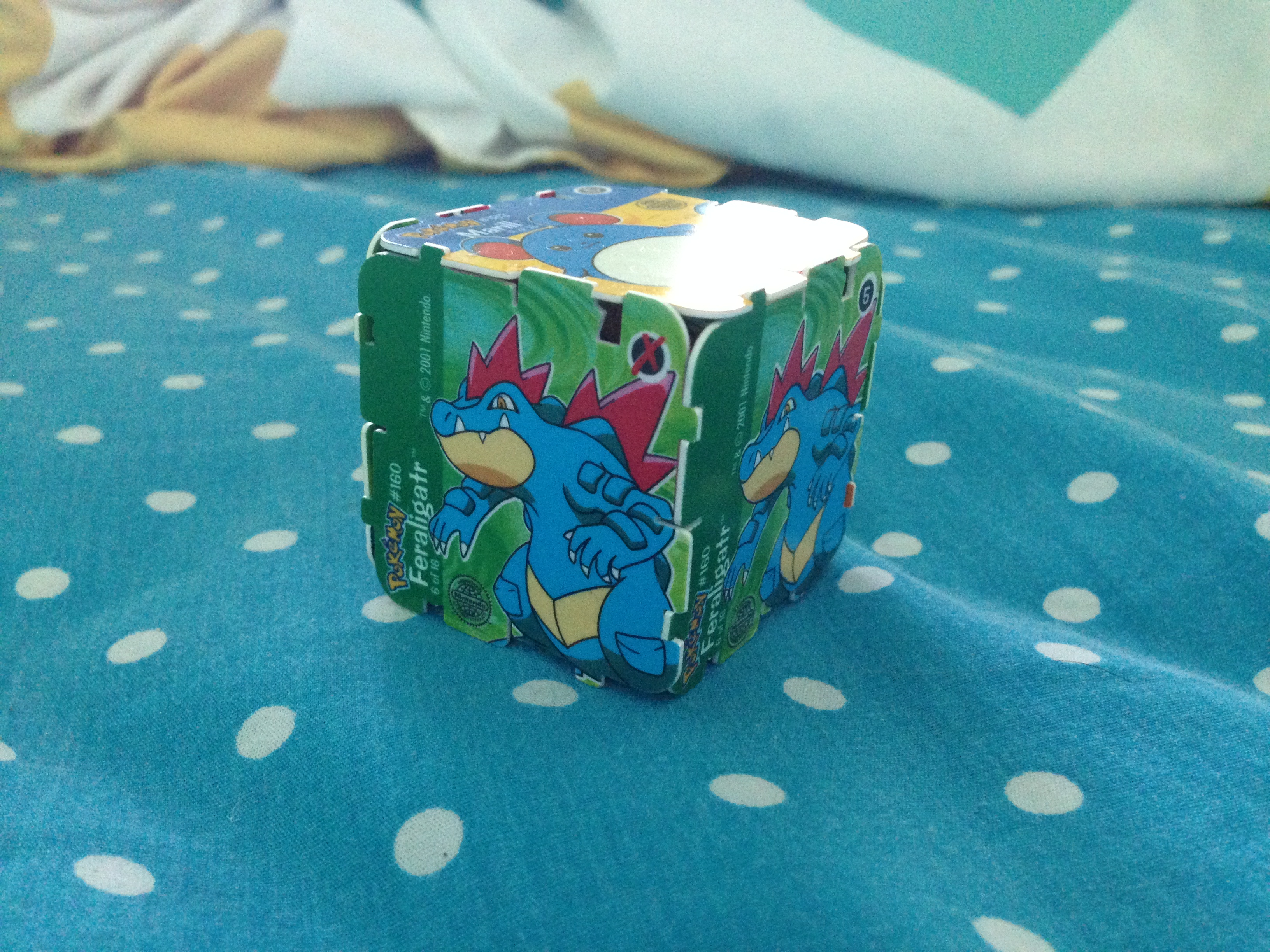 I can't remember if I ever updated on this cubitz thing or not. but here it is! These are called pokemon cubitz, and they come randomly packaged in pieces.. I just happened to find a set that was all feraligatrs and one marill.. hahaha. I would like to have the whole set eventually, because they can be put together like a puzzle to form a picture. But for now, this is good! 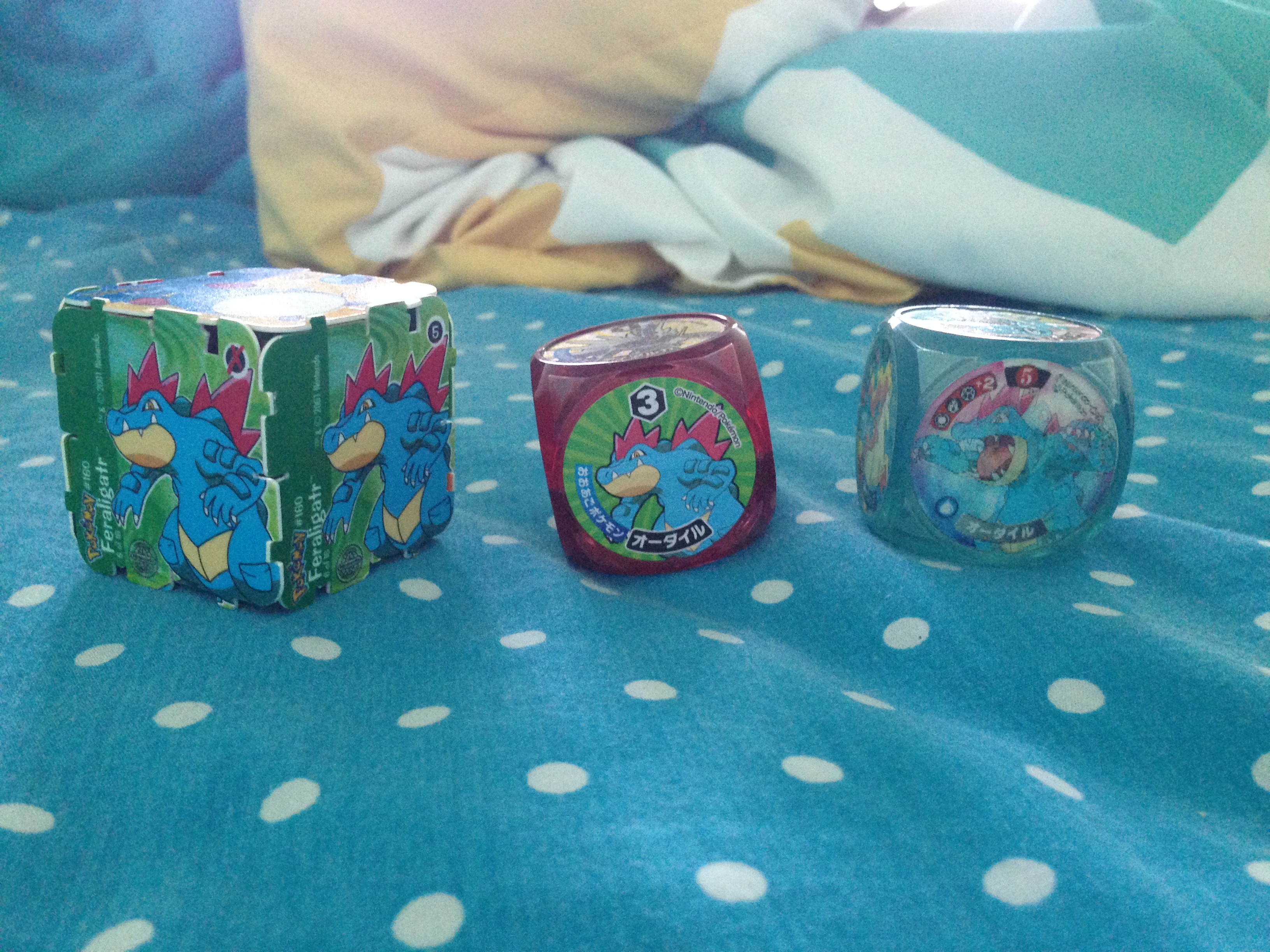 And here it is with my other cube items, 2 dice I have. The one on the right is pretty badly damaged, but the gatr on it is in good shape! Maybe one day I'll find a nicer one.

Then there's this Burger King Gameboy toy! I have other pieces that go to these that have feraligatr on them, they were in past updates and you can see them in the full pictures of my collection below. But this is the first actual gameboy itself that has a feraligatr on it that I've seen. I'm pretty happy to have it! :]

Now.. onto the super rare items!

AAAAHH. Finally! I have been looking for this coin for about.... eh.. 4 years now? 5? something like that. I finally found it on Y!J ;o; I had some competition, but I was able to win it with the help of a friend who is good at using middling services. I didn't take any pictures of it with my other gatr coins, they're all inside my card book.. but maybe eventually I'll get them all out and document them.

bacentrekkes! I just love it. It's so unique. I consider this a grail class item, so yaaay!!

WOOHOO! I didn't even know this existed on tape! This is "Big trouble in Balloon Town" The Pichu Brothers short. This is one of the few episodes or instances where Feraligatr played close to a main role. He wasn't in very many episodes for some reason. (Probably mostly due to the fact that Ash didn't evolve his Totodile.. but you know.) I'm so so so happy to have this. My ultimate grail is to find a Feraligatr cel from this episode.
Here's the back of the tape:

Ta-Da!!!! Fuzzy Feraligatr figure! Also known as the Yawarakai line!  Thanks so much to

technicolorcage for auctioning this.. I couldn't be happier to own it finally. It's another one of those things where I saw Typhlosion and Meganium and wondered for years if a Feraligatr existed. It does!
Here's another side:

It's so velvety soft and so gorgeous and just... AGH. I'm in love with it ;w; <3 But another really interesting thing about this figure:

Is that it's the exact same mold/make as the coin bank.. I've noticed all the Yawarakai pokemon that were made are like this. If they have a bank figure, they also have a yawarakai in the same post. It's really interesting because the yawarakai is the same size and everything, but it's not a bank. It's just a large figure.
Either way, it makes my collection feel that much more complete to have them both! :D aaahhh <3 ~~~

Okay so that's it on the updating, now I'm just going to show my whole collection. I re-did the layout, and it's unfortunate that everything can't be on display because things like the shirts and bags are awkward, but one day I hope to have a nice glass case to put everything in, and maybe frame all the flats and the shirts and stuff :>

So.. here's the shelf, I swapped the shorter one out that I was using for this taller one, even though it doesn't really match the rest of my room. Everything is a lot more spread out and visible this way. :D I also moved all my customs to another shelf that I'll show below.
right now let's get close ups of the shelves!

This top shelf is a little awkward because it's the only spot where my folder and coloring book fit, and some things have to kind of stack a bit.
Also the yawarakai figure is only there for this picture, I plan to get a plastic box or something to keep it in to protect it from dust. The folder contains my settei and other large flats :>

I'm really glad those thumb tacks went into there, I wasn't sure they would. But I really love how it looks with the keychains/charms hanging like that! This is all the smaller figures, from left to right it's a marble, the metal collection metal figure, zukan, v-chip figure, retsuden stamper, suction cup figure, 2 gameboy toy pieces, chou ghett figure, Dome figure (no one I know has seen another one of these, so there isn't much information on them), Pencil topper, minicot, keshipoke and chupa figure. Then the metal coin in the front there. (hanging in the back are a banpresto charm set, a tomy(?) charm set, and the metal swing keychain)

This one, left to right is a european battle figure of some sort. I don't know a lot about it, an old friend brought it to me from Germany. But the box seemed like it was related to the jakks pacific line of toys.The european zukan piece, official, unofficial and crystal TFG figures, Phone strap (from canada!), 2 tomy figures, unofficial clear tomy figure, and a Topps candy figure. In the back are 3 pencils.

Lots of rare things on this shelf here!! Whoo! So in the back it's the Can badge pin from the pokemon center, the B/W charm set, a bunch of colors of the korean battle roller toys, atop those is a bottle cap. Middle row: clear kids figure, clear attack kids figure, attack kids figure, regular kids figure, and another pose of the kids figure (different release). Then 2 battrio there to the right. Front row: Monster badge pin, Johto charm, D/P era DS cartridge holder, Wapz toy, and a majong piece featuring feraligatr.

Finally, left to right is the Hasbro talking feraligatr, the Poke-Plamo plastic model set (which came with croconaw, totodile and pikachu as well), and the master quest card book.
and just because I've never really expanded on it, here's what's inside the card book:

Here is a notepad piece of paper, a thing from the back of a valentines box, some dog tags, pog and a coin, along with some tcg.

More tcg, one of those neat battle card things, a pan sticker, and some more pogs :>

on top is the unofficial plush that came out recently.. I say unofficial instead of bootleg because this plush isn't even based on a plush that exists for feraligatr 0.o how odd. I know some companies copy custom work too, but this doesn't look like that either. In fact, I think the face may be loosely based on those slippers that are underneath him, which are official. Who knows -shrug-

And last, but certainly not least, are all my customs! Cupcake gatr is a little hard to see because he's under that plush there.. but. Yeah these are my custom babies along with the official Feraligatr UFO (one complete with tags the other all loved and special) :>

Fun fact: the Feraligatr UFO plush was the first Feraligatr item I owned and sparked my Feraligatr collection. It's been 5 years that I've been collecting now, and I've made some amazing friends along the way.. I wouldn't trade this hobby for anything! So, thank you all for making this simple thing such a big deal for me, and for all the help some of you have given me along the way in my collecting, and just in my life in general. Thank you!

Shipping update!
All items purchased from my last sales post and my auctions have been shipped and are on their way! If you are within the US you should receive your package in a day or two. If you are international give it a week or two. Thank you!