Hello community!
Today four packages arrived to my home and with THE GRAIL OF ALL THE GRAILS *^* Really it's a super LONG post with all the gets, Indeed I don't think that somebody read the full post XDDDDDDD 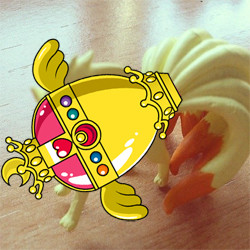 GRAIL OF ALL THE GRAILS :____________________________
NINETALES ZUKAN PIECE
Okay... I NEVER thought I would be able to get one. Ninetales was my favorite since Pokemon Yellow (later I'd add Politoed and Poochy) so when I met this piece I FELT IN LOVE. Almost all the Ninetales figures are on the same boring pose and there are very few merch of him so it was surprising BUT I saw his price...
That was my grail but it wasn't a grail since I wouldn't have been able to pay the full price for it, I'd never thought I would be able to have it because I can't spend so much money but then I tried it...
I bidded a weeks ago on a Ninetales broken on ebay but I lost it. I lost a broken piece! It was like 'I can't even buy that one D:' and then I found another one on yahoo and I tried but at the last minutes I was bidding and I saw that it was getting expensive for me, I tried and I tried but I stopped, I thought that I shouldn't pay more... however my boyfriend bidded on the final seconds and we won... He did it because he knows what it means to me and... jeez I love him so much (my bf I mean, well, I also love Ninetales of course!)...
It's like a dream to have this tiny Ninetales (I thought it was a bit bigger DDDDDD:)
Really I'm SO DONE. It's like it was impossible to me and now I have it...
Btw, it's unbalanced O.o His front paws don't touch the floor...
And I bought a Vulpix piece so it should be coming one day...

Another huge want! This is my boyfriend's Feraligatr UFO. We bought it to a french seller on eBay. It came super fast and it's so chubby *¬* He really looks awesome! One day I'll get the Typholosion UFO to mate with him. I wish they would have more plushies :'( I love the Johto starters so much (Quilava is one of my favorite Pokemon!)

Another trade! This time I made some customs to

agkelikos so I got another Politoed and Starly *^*
There you have the new Politoed with Profesor Potato (I put that ribbon to Prof. Potato because he's so classy).

Some random stuff *^*
Poliwag from the TOMY Mascot GA that

eevee_evs_lover made. It's so tiny, cute and funny <3
Raikou, chupa (?) Mightyena, Raikou and the without tail Flygon zukan piece are from a seller on eBay. Super nice and with an awesome price. It's sad to see Flygon broken but at least my boyfriend have something :'(
And the Mightyena pencil topper from a trade with

thedaftlynx another one with the tail broken! But I can glue this one :3 Thanks a lot!

whitekyurem Thanks a bunch! I love the walky plushies with their metal tags. They look super cute *^*
And a Charmander UFO I wanted a few ago from yahoo. I love his fabric <3

The other walky I wanted! Cyndaquil walky from yahoo <3 Look his tiny legs *^*

MCFLUFFLY... I mean, Whimsicott Pokedoll. This one is from my boyfriend. Really, he was all day long like 'IT'S SO FLUFFYYYYYYYY' and touching him... but... yes... IT'S SOOOOOOOOOOO FLUFFY <3

Politoed line charms! I was missing them D: I got Ninetales and Poochyena some months ago but I wasn't able to find these for a good price but I got it on yahoo <3 I love the Politoed pose

Larvitar zukan. Tyranitar is awesome o.o It's really well made and big... but Larvitar is so tiny that I'm afraid I'll lose it :________

Poliwag Pokemon Time stap... OKAY I LOVE POKEMON TIME A LOT. I have bought like 15 clearfiles and 5 tins of Pokemon Time latetly and I DON'T REGRET IT :______) However I'm not really lucky with the bookmarks :<
Vulpix, Poliwag and Cyndaquil metal charms 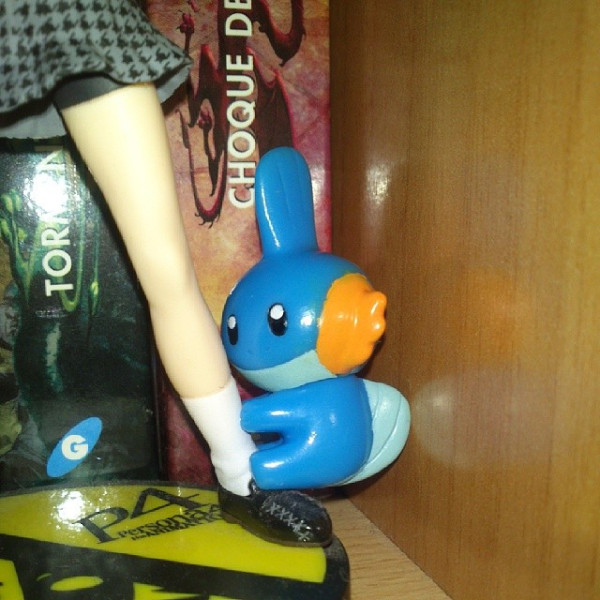 The mudkip grabby! He seems to like being on Chie's leg

And a lot of kids! These attack kids look wonderfull I love the new kids with their poses. That's why I love SO MUCH the kids <3 MILTANK WITH THE MILK, PLEASE.
However I want to show you some offers with grabby figures and clear kids! :O

Pikachu, Treecko grabby, start at 10$ each

Nidoking, Nidoqueen, Porygon, Sandshrew, Rattatta, Raticate, Wigglytuff, Gastly, Hitmonchan (x2), Horsea, Kakuna, start at 3$ each
Also, i have updated my sales post with even more kids, some tomys, other figures and other things. Here is a little preview, click on the image or here to go to the sales post