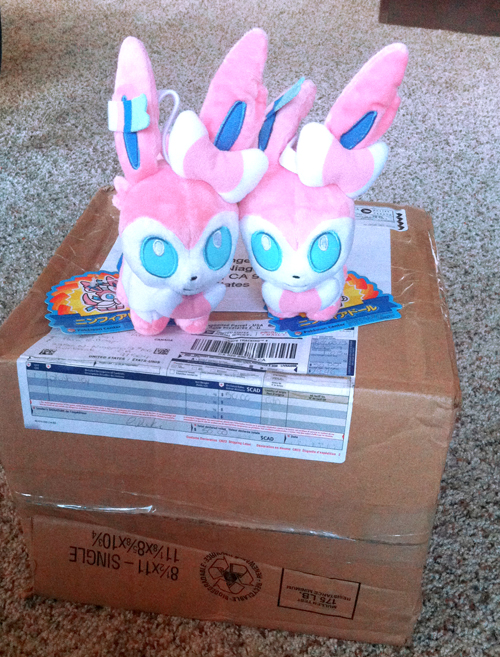 Hey all! It's finally time for a very special collection update! I've been waiting for this package for quite some time now. Too bad for me, I had to wait a little longer since it arrived while I was out of town for vacation. I just got back from New York where I visited the Nintendo Store and then onward to Florida to have a fun trip to Disney World. I decided to stop by the Japan Epcot store for Poke-Goods. I've been out of commission for two weeks. I have a lot of PMs and comments to go through. So my apologies in advance to everyone waiting on me! I'm slowly getting to everyone. Feel free to get back to me here too. I know a lot of my messages got pushed down my inbox.

Anyway, Come check out my newest Sylveon gets along with a special custom holy grail of mine! What's in the box?! WHATS IN THE BOX!?!!!! 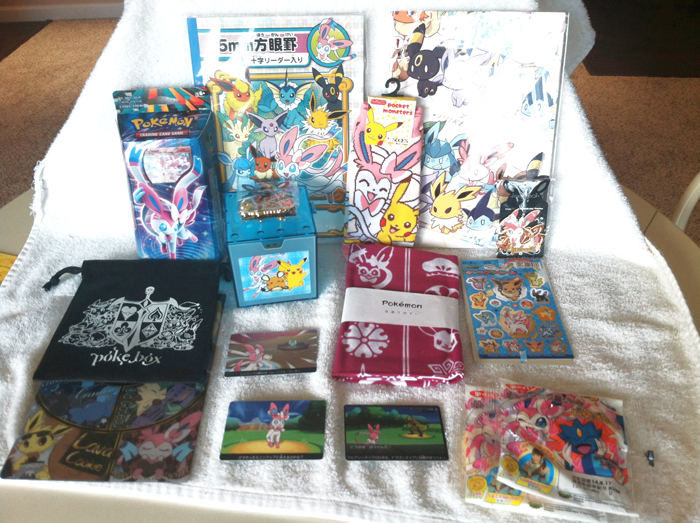 Here is my Sylveon haul for the past couple months. Sylveon hunting has been a little scarce lately. Which I'm okay with since it gives me time to hunt down rarer items. I got a hold of not one but two of those blue Sylveon containers! They will be placed in my collection where lots of my odds and ends will be kept. The light blue makes them pop within the pinks. Decent size too! We have a new Eeveelution notebook! Yay! Slowly I'll collect them all. There are a few I still need. I also went to my local TRU and got the special Sylveon Deck box. Mostly for the box. XD It's gorgeous. I got a hold of the newest "PokeBox" promotion! Their stuff is breathtaking. The quality of the pins alone is incredible. I have no idea how they make them. Even the backing for the pin is custom. So cute! Decided to get the Taro set, the folder, the comic book and a Jolteon pin even though I was only supposed to buy just Sylveon's. They were so kind to add a PokeBox drawstring bag.  :D They added some medallions of Eevee and Umbreon but I don't collect them if anyone is interested in them, let me know. The pan wrappers were such a surprise! I love both Sylveon and Weavile and the artwork is just too cute. I was lucky enough to get two and Hawlucha Pan is on the way. :D The XY cards were from a trade (Still need to hear back from ya) I only need the Amie Sylveon card. Let me know if anyone out there has it. The dyed Eeveelution towel is very pretty! Such a nice shade of purplely pink.

One last official update is...POKEDOLLS! I haven't showcased or talked about this Pokedoll yet for obvious reasons. *U* But now I can! I love love LOVE this pokedoll. Yes, it doesn't look like the style the other Eeveelutions are in, yes it's smaller than an ordinary pokedoll and YES it has fleece pieces ala the bows and ribbons but I DON'T CARE! I've been waiting so long for this Pokedoll to come out! It's so petite! So adorable and I absolutely love everything about it. No one can tell me other wise. So, I ended up with five.... One is for traveling, one is to stay mint in plastic, another is for display, one has a charm necklace with a Sylveon pokedoll metal charm and the other lives in my bedroom because I just want to look at it. I didn't buy six for the slight chance an American one releases in the US.

Next up! A grail of all holy grails!!! Here's a hint. This has been on my list since Sylveon was announced and even before that if you consider the artist!

So, today (actually a couple weeks ago since I got home after it arrived at my doorstep) I got the greatest package EVER! I still can't believe it. I really cant.  Just.....LOOK!!!!

If you haven't guessed by now these adorable works of art were made by  BabyLondonStar. They look like official store bought plush straight from the Pokemon Center. That's because Charlotte is amazing! Her pokedolls are some of the most convincing hand made customs in the fandom! Her pokedolls look even better than the originals! It's just so uncanny. I'd admire her work on multiple sites hoping she'd auction off someone I liked (I didn't care who) I just wanted something made by the artist. Then, she took down her sites and would sew only in her free time which left commissions and auctions scarce. Then, a couple years later they decided to not take commissions at all. AW! D: I always wondered at the time what would I even commission her to do. I knew I wanted a pokedoll variant but Slakoth and Breloom lines still haven't gotten pokedolls and they already made a shiny Absol. I wanted something special. I did have Emolga but I already made a shiny for it. Then there was Lugia but as much as I love him I knew I wanted to wait until the right Pokemon to come along. Years past and SYLVEON came out for XY. I knew Charlotte wanted to take a stab at them but the Pokedoll wasn't released for another year. SO I waited and waited and once the doll came out I knew! This was my custom holy grail.

Have a plethora of pictures! Because I sure can't get over them. (My backdrop was too small for the DX plush so I blurred out my distracting art wall.)

These are the big 12 inch DX plush. In both Shiny and Regular!!! *Kissies*

Size comparison with the official pokedoll and the shiny standard size pokedoll.

Baby with her momma. DX Sylveon has a lighter shade of blue for the eyes but it really matches the light white they chose for her fur. It's not as striking as the Pokedoll and looks very warm. The DX plush are extremely soft and so well stuffed. The seams are perfection and the ears even flop over just like the Pokedoll. So authentic. Just look at the curves of the pink around her feet and the little fur tuft. The quality is better than I could ever imagined. I knew her work was amazing but having one in person I can really aprceiate the craftmanship in every stitch. The DX ribbons and bows are made out of minky rather than fleece. Which I LoOoOoooove! I wish Pokecen went this direction as well but now I have these to admire.

Here is my blue baby. I haven't stopped holding him since I got it in the mail. It's just....so much better than the original plush. In quality and softness. It feels like the classic pokedolls before they started cutting corners but it's Sylveon and I can totally tell the difference when I hold him. Charlotte hand dyed all the ribbons. She had to wait till one side dried to get to the other side and then repeat four times over.  The ribbons are EXACTLY like the original. The bows are also hand dyed as well and look and feel just like the official but even better! I just can't get over this and probably never will.

Both the Shiny Custom and the official regular Pokedoll. Look! The bow is fuller, shiny can easily stand up with no help at all. The ear droops just like the official but is easily placeable compared to the official. All ribbons are sewn in place. The fleece parts even feel the same!

I made my own custom shiny Sylveon pokedoll tags. I laminated them and tied them to their legs. No artist tush tag on these guys though so on their legs they go. (Too excited to take photos of them with the tags but I will later) I'm astounded by these. BabyLondonStar never takes commissions and only sews what she wants when she wants. Which I totally understand since I do the same thing. I think now she's made every evolution of Eevee in pokedoll shiny form. (Besides Leafeon/Glaceon since their shinys are so similar to the originals) It's crazy to think I now own a BabyLondonStar Eeveelution. Getting the chance to not only own an original by her but having a Pokemon I find very dear and to have DX variants as well is a dream come true. I never thought it would happen but I'm eternally grateful. These will never leave my collection. They are the ultimate custom for me and they mark over 20 Sylveon customs plush I've commissioned. These are the crem de la crem. Not just for my Sylveon collection but my entire collection. Thank you so much Charlotte. I have no words. I love them so much. <33333333333333333333333333

Please refrain from asking BabyLondonStar for commissions. She does not take commissions anymore. Please respect the artist.

So, I mentioned I went to New York and stopped by the Nintendo World. Not much stuff I didn't already have Japanese versions of. Here's my haul with Shiny Sylveon stealing the spotlight yet again. He just fits so perfectly! They didn't have Inkay or Swirlix this time but I'm happy with what I got. Next time I go I hope they have an English Sylveon Pokedoll. I know bootlegs have already made some with American tags. I just hope they come out and I find a legit one. 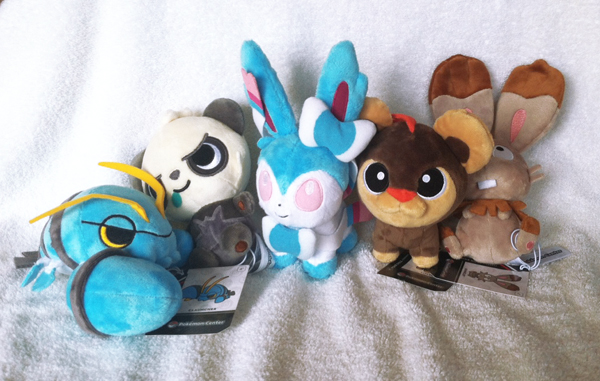 I also went to Florida to visit Epcot at the Disney World resort. I've never gone before and I heard so many stories about the Japan store they have. Pokemon wise....I was very dissapointed since I can get any of the Tomy American merch anywhere near me. I did buy a lot of rare Ghibli stuff to make up for it. :3

I did get a lot of Furious Fist booster packs for the sake of Hawlucha! Here's what I bought at Epcot.

I got all the Hawlucha wrappers they had, they also had a cardboard version that holds a booster pack within and a lucky find the card binder! The other side has Tyrantrum on it. So happy to have found it at Disney World! It's awesome to know I got to use my Disney Discount on Pokemon stuff. X3

That's all I have for now, next post will be a Hawlucha update and a group photo of all my customs thus far. Just waiting on a couple to get to me. Thanks so much to everyone who decided to read this whole post. XD You are a brave soul to get through all my ramblings.

I also have a few Sylveon/Hawlucha wants over on my collection website. I'm looking for anything Hawlucha right now. Be it flats, movie merch or Furious Fist merchandise. I'll take em'. Let me know if you have anything that isn't pictured. I'm also still on the search for the last remaining Sylveon items. The list is getting smaller but I know there is more out there! Give me a comment!

I frequently update my site so please give it a look.

Till next time!
~Tara