I haven't posted in a while I just noticed, I'll be making one of those enormous collection update posts in the future after some more packages arrive but until then I here is a wants post. This might be rather text heavy so forgive me!
I just recently discovered Portuguese Pokémon cards is a thing that actually excist and would love to get my hands on a whole XY or Flashfire booster box (Or just the four seperate Furfrou cards that can be found in them.) if any of those have been released yet. I'd either be looking to get information about any Portuguese auction site that could possible have them or just find a person that could get me some.
I'm also looking for any Spanish cards released since they all just disappeard one day (Before I had a chance to get them!!) and now I only ever see Italian cards on the sites I used to look at. Really want to get my hands on all of these before the new Russian cards are released, so I am willing to pay around 8 to 10 dollars each for the separate cards and at least 70 for a whole booster box. 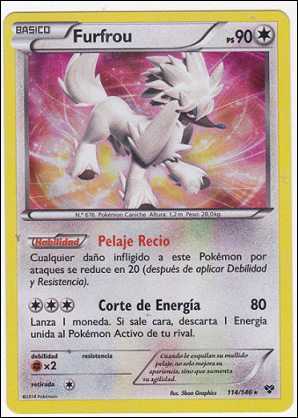 Picture of the Spanish XY card found on Ebay a long time ago.