I've being told that there are two different types of foils with a rainbow reflection in series 1 blue logo/oval seal, when I previuosly thought there was only one rainbow type and a metallic type. 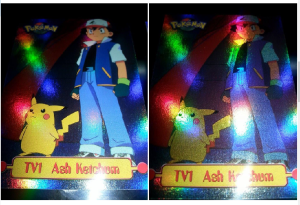 I was wondering these thing happens for other series too.
All my chromatic foils from series 1, 2, 3 and the First Movie are of the first type.

In a few weeks I will add a new column in my program to catalogue Topps Pokémon Cards for series 1 blue logo/oval seal for the newly found foil type. If anyone could tell me if they have cards from series 2, 3 or other series that have the reflection all over the card and send me a picture I will add a column in those series too. (I will also probably add new scans)
Also, if anyone has a pikachu #25 cards of the second foil type and they could take a straight picture for me I will put it in the "Foil Overview" section has an example. I should be able to cut the photo like this to make the sample picture (this is my own pikachu first chromatic foil type): 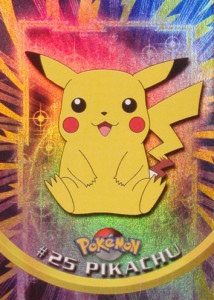