Collection Weeding Sales + a few gets

Hi everyone. I know I posted a collection update not too long ago, but since then I've decided to do some big collection weeding. The trouble is that I have no fricken space! I've accumulated way more items than I thought I would when I first started collecting, and as fun as it is, I just don't have room for everything. I've been spreading my items out throughout my room, but it's still too much.

On top of that, I've been interested in a lot of items that don't fit in my main collections. There are just so many cool things to buy, as we all know, and I'm starting to like the look of my shelf with several different species hanging out there. Thus, I've decided to sell a good chunk of the absol/weavile items I have that I don't care for as much to free up space for other 'mons.

A little sad I know, I still consider myself a Weavile/Absol collector, but I think I need to focus more on items that really strike me instead of just buying stuff for the sole reason that it's that species. This is really what my intention was when I first started collecting, but it was very easy to lose sight of that. :P It would be different if space wasn't an issue, but well... it's a big issue!

TL;DR: NO SPACE. BUY MY STUFF.

Click the link to go to my sales! I may go offline pretty soon but I will be in touch if I don't respond to comments right away. 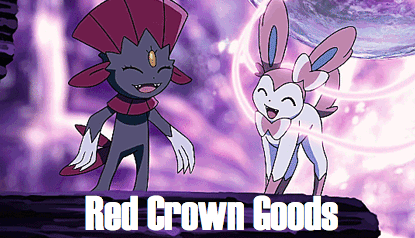 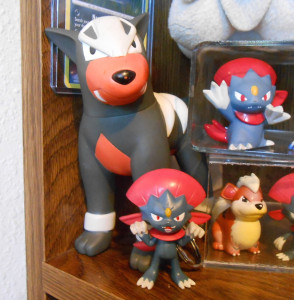 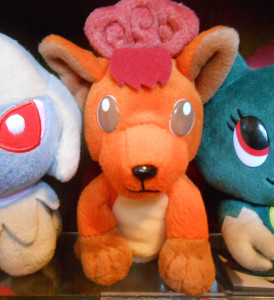 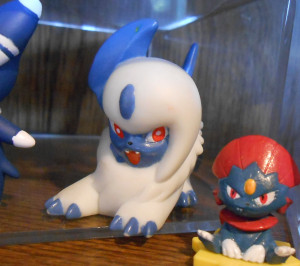 DX TOMY Houndour!! I won this guy for just 100 yen on Y!J. The seller didn't put "DX" in the listing, so I assume this is why no one bid against me. Cause that seems like a seriously good price to me. He isn't without his flaws - there are some pretty big scratches on him, including a big "scar" across the face. But whatever, I still really love him!
The fierce little Weavile below him came from a lot on Y!J as well. I'm really happy to have this weav, I just love the pose and it's a decently-sized figure.

Vulpix came in a trade from facebook. I used to have this same plush when I was younger, but of course it's long since disappeared. I'm glad to have another!
And FINALLY I have the Absol attack kid. This thing has eluded me for a while now. 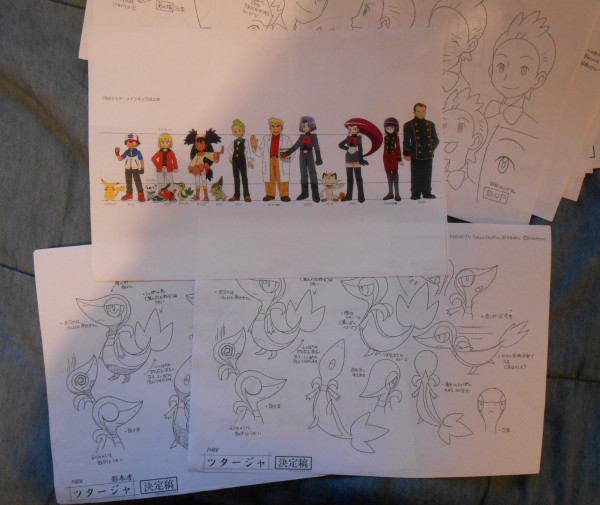 This package also came in the mail today... SETTEI! I am seriously in love with settei now after buying a few from

methuselah31010. This was a lot of 35 from Y!J. Unfortunately it was a rather disappointing lot. :( Snivy's model sheets were the only pokemon sheets included besides Pikachu, and the rest were mostly doubles of character models that I'm not too interested in. I do really like the in-color height chart, though. I will probably be selling most of these off soon. If you're interested in Cilan, Iris, or Ash, do feel free to message me before I put them up for sale officially.

A few days ago I also made a post asking about lost domestic mail - this was actually concerning another larger settei lot I won on Y!J. I contacted FJ and they actually told me that the seller hadn't emailed them back about payment, and that they would try and contact them again. So that's..... okay, I guess? I'm relieved that it's not a case of lost mail, but it seems pretty weird that a seller would let a transaction sit for two weeks without payment and just forget about it. But ah well, I really hope that it's settled soon! That lot was a bunch of gen 3 settei, and as you can imagine I'm dying to know if there's an absol in there. If all goes well I'll hopefully be getting that in the next month or so. 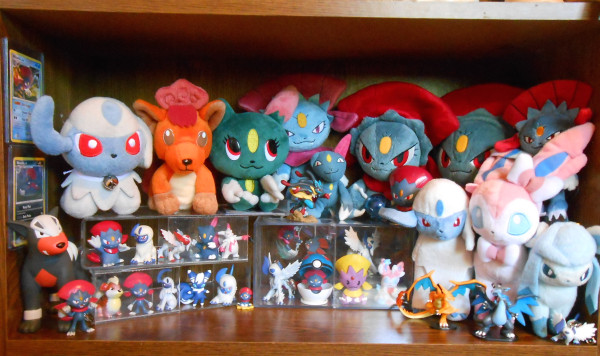 Here's my updated shelf setup, but I'm not too happy with it lol. I don't think I'll ever be satisfied with how it looks. It'll need some rearranging again when I have time. But as you can see, new pokemon are already sneaking in there with the Weavs & Absols.


That's it for now! Thanks for taking a look!
Tags: absol, houndour, sales, vulpix, weavile
Subscribe