Good GETS! Plus, family/collection pics!

Hey Guys!
So this is my second post here at PKMNCollectors, and I bear evidence of a good GET!
So, I ordered A Thing from Osaka Japan about two and a half weeks ago through EBay. I knew it would take a while to get here, but I didn't expect it to get here as soon as it did (as strange as that seems. I guess im used to shipping times taking FOR-EV-ER). I was gonna do something GLORIOUS to commemorate but truth be told i haven't been doing well lately health wise so I had to settle for just some pictures. I tried to have a little bit of fun at least. So without further ado, pictures!

(As you can see...he is mighty curious about the contents of this box...) 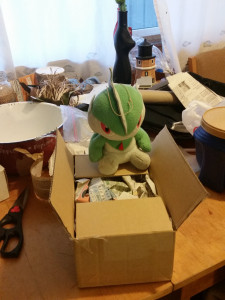 (It took a while to open it with all that tape! Ani, you have a high attack stat! You should have helped.
I am glad he didn't though i suppose- he could have damaged whatever was inside!) 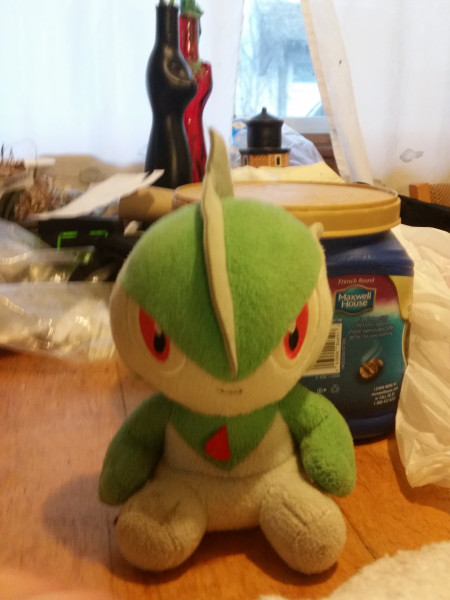 (Hey buddy! What did you find in that bix ol box?) (Woah!!! Hey buddy,  you found a Galladite and evolved! How cool!) 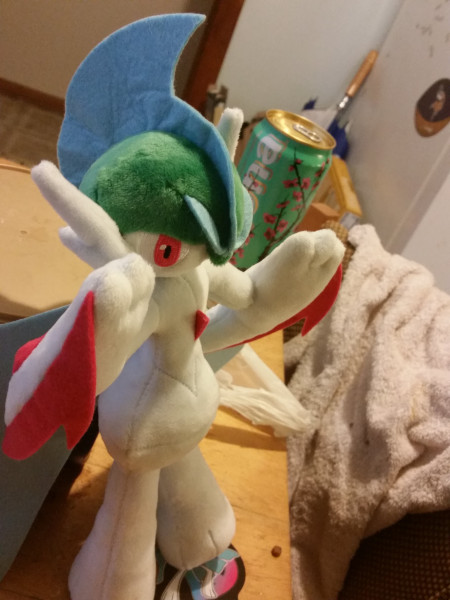 (Soft, suave, debonair...and with Arizona green tea. Whoops.)
Haha, forgive my terrible storytelling. Anyway, that's not quite the end! I decided to take it upon me to also take some "family photos"! As in, getting this guy with the rest of my Gallade collection (and then some! Lets investigate..) (So above is my general collection. It isn't much, but its growing! Gallade merch isnt exceptionally common so i'm glad I have what i do thus far) (Photo of a Gallade TCG that i used in a competitive deck for about 3 months, along with 2/3 steel charms I ordered with the Mega Gallade plush) (A shot of two other TCGs, the one on the left actually almost won me a tournament a couple of years ago. He was nasty. The one on the right is just pretty so I keep it there..haha) (A quick shot of my kid figure, my original Gallade plush, and a perler sprite a friend made when she was practicing. I traded her for it a while ago.) (In this pic you can see my Gallade zukan (the ralts..was lost a while ago by accident during a move. it had no fastener so it was bound to happen really..)
You can also see a Gallade Lv X card. -laughs at lv x's..- and a Gallade mini-card that I THINK came with the figure to the left of it, which I  believe is a Tomy figure. Gallade really likes that pose doesn't he? Oh- if you look closely you can also see a handmade bar of soap behind the mini card- that has a kirlia figure in it. I cant bear to use it.) (..and another shot of my mega dork. just in case you wanted more.)
And one MORE CUT, with general pokemon stuff i've collected over the last 10 years or so... (I actually had another Croagunk plush but it vanished in a move...sad face) (My bit of friend-pride is in the middle there- The Mega Banette was a hand made sculpture my friend and honorary sibby made for me during the holildays last year. It looks so swanky I love it!! now if only game freak could start making more Banette merch..I'd be all over that.) (I dont even like Kyogre that much, but it's too damaged to sell, and i found it at a thift shop YEARS go. I have a soft spot for it. It opens its mouth when you press a button on its back! rawr.) (My modest Cofagrigus'...I love this freak so much. Its too bad its kinda hard to find stuff of it that appeals to me. You can also see a silly sudowoodo, another regular holo gallade card, and an old school Pokedex! i actually have two pokedex' but..the other is missing for some reason. Also, imposter Boo ghost sticker!) (About 30 percent of my TCG collection, with a Xerneas sitting majestically atop. Behind these tins are two binders loaded with cards, and in the drawer underneath is a long cardboard box of even older cards. I was pretyt big into the tcg. its what got me into pokemon when i was little) (A drawstring bag with Meowth, full of pokemon marbles! I wouldnt dare take them out and photograph them all. They'd roll everywhere and it'd take forever. I also have my original Red Version (no label...qq), a copy of Sapphire version chillin out, and in the back theres a few VHS videos...) (I dont make a point of showing my art in my collection but I have no scrafty merch and i want to show my love somehow so i found a doodle I did of Scrafty and Scraggy a while back and threw it in front of my Manga Volumes and a couple of game cases...I also have a few random Tomy figures I got from a White Elephant gift exchange about three years ago. Good stuff.) (One of two gold plated BK pokeballs I own. I used to have Togepi too but...children got a hold of it and needless to say, good bye Togepi. But here is Charizard!) (I love Giratina!!! They are my favorite legendary pokemon, and despite this i have almost NO merch of them. I used to have the Pre-Order figure I got with my copy of Pokemon Platinum years ago (it was..so beautiful..) but unfortunately it met a tragic end during a move. Of course. That is a theme, mind you. You can also see a couple of thift shop gets) (My lil gen 4 corner LOL. Roserade and Carnivine were purchased at anime conventions years ago, and the mantyke was a gift. I got the other two from thift shops. The sticker book was a Game Stop purchase like 8 years ago at least, and then I have a random stack of tcg cards that are mostly multiples. the top one is holographic and flowery. its awesome. and also a mc donalds toy because why not..) 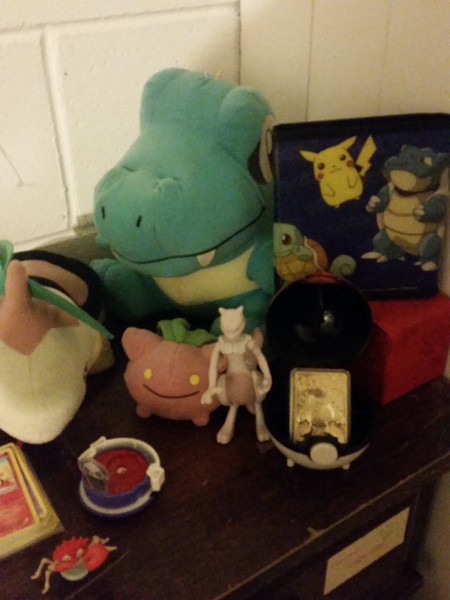 (A baby Hoppip I got when I was like 12, and my FOOT TALL TOTODILE BABY. I got him when HG/SS came out. Much love. Probably my favorite starter line, to be honest. Also a broken-ish Mewtwo figure and my second gold plated Pokeball- Poliwhirl! I also have a CD case, and that red box is full of steel trading coins of some gen 1 mons. Which, like the marbles I have no patience to take photos of at the moment. Maybe one day.)

Alright, thats it for this behemoth of a post! Have a good night everyone!! I didnt tag every pokemon because frankly theres a lot of them so i just tagged the ones i have multiple items of..
Tags: collection, croagunk, drifblim, gallade, giratina, minccino, tepig
Subscribe