The "It's been 6 years, I should post an update" update

I've been meaning to do an update for a while... but now that I've hit my 6th year here, I figured I should stop loafing around like a Truant Slaking and post an update. 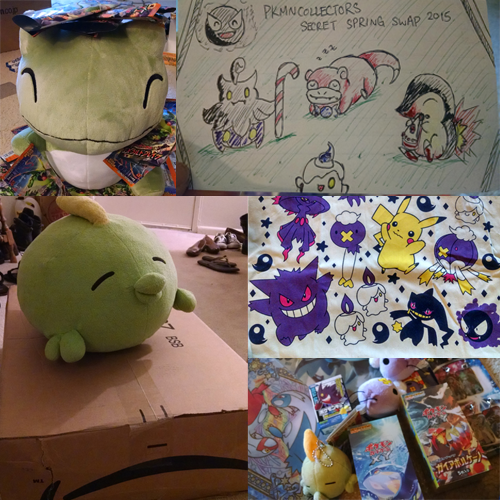 As the preview image implies, this update pretty much touches on most of my main collections (Gastly line, Cyndaquil line, Litwick line, Zekrom, Slowpoke, Pumpkaboo, TCG), plus lots extra stuff because who can say no to extra stuff, especially when plush are involved?

I guess I'll start off this update with a panoramic shot of my room!  I've had my phone for over a year now, and this was the first time I tried out the panorama setting for the camera haha.  It was really hard to move at just the right speed so that everything fit, but yeah, this is more or less what greets me when I walk into my room. My boyfriend calls it the "Pokemon Cave" because I usually have the blinds completely closed. :p

kitzune.  Given the sheer amount of full art cards in TCG sets these days, I wasn't too thrilled with my Gaia Volcano and Tidal Storm pulls, but you win some, you lose some.  I really liked the artwork for Latias and Latios from the "My Dearest" promotion, so I got the clearfile and pass case (which was my first pass case ever!).  Of course, being a Gastly line collector, I had to get the Mega Gengar kid and a really nice looking clearfile that featured various Mega evolutions in cool action-y poses.  The Gulpin and Drifloon Petit Plush were instant-buys for my Drifloon line side collection and my accidental Gulpin side collection.  I have my extra Drifloon on my purse, and I often find myself playing with its adorable little arms.  And then there's my pretty boy, Steven........ I was pleasantly surprised when Movic released some Steven goods for the anime's Mega Evolution special because human characters never get much in the way or merchandise.  I missed out on getting the strap with Steven's mega stickpin when it was first released, but then I managed to win one on Y!J a few weeks ago!

toda came to visit me for a weekend.  She brought with her the Japanese ORAS artbook and clear posters that she helped me obtain (yay, Steven clear poster <3).  We went to Katsucon, where I found some nice Pokemon stuff in the artist alley (including stuff of my favorite human characters!).  I think we both screamed a little when we saw the Haunter charm because it is so wonderfully perfect!  I also caved and bought the Mega Slowbro charm (even though I don't really like Slowbro/Mega Slowbro) because it just looked so sad and distraught!  I may have to buy more charms from that artist's website because she had so many charms of other Pokemon I love. D: I also got a set of very nice Xerneas and Yveltal prints.  I ended up redoing one of the walls in my room, so now the prints/posters reflect each generation of the Pokemon games (I still need ones for 1st and 4th gen though...).

My boyfriend's parents did some furniture purging, and they gave us this really neat glass display table!  I felt like there was a million different things I could put in it, but I eventually settled on displaying my badges (still waiting for the Kalos set to be made) and games.  (My 5th gen and 6th gen games aren't in there because I still play them fairly often!)  I'm not too 100% satisfied with the cloth I chose to put them on (makes the display look too busy), so hopefully I can find something simpler but still Pokemon-y in the future.

kitzune, who happens to be a claw machine hero!  I freaked out when I first saw images of the Banpresto metal tins because the ghost-type one was so perfect for me.  The metal tins featured Pokemon that evolve when you trade them, and the ghost-type one featured two of my favorite Pokemon: Haunter and Pumpkaboo!  The Gengar MPC and Goomy Damono promotion was also released around the same time, so

kitzune kindly won/picked up some of those items for me as well.  I never realized what how well Goomy and Gulpin went together until the Goomy Damono promotion happened.  Additionally, I also ordered some Year of the Sheep-themed items from Pokebox because the sheep were just too cute!

A few random gets from

pokemontrader, and a some others I cannot remember at this point (sorry!). ^^;  It took me a while to find one (didn't think a Scolipede would be so hard to hunt down, honestly), but the Scolipede MPC was the last plush I needed to complete my competitive team in plush form.  Also, some gets for my TCG and ghost collections.

Another big purchase from

kitzune!  I knew getting the GIANT Substitute plush was out of the question, so I decided to get the second largest one.  After taking some suggestions from twitter followers, I decided to name it Reuben, after the reuben sandwich.  I wanted a sandwich-themed name because my original Substitute plush is named "Sandwich"... because I was calling it "Subby" for a while, which reminded me of sub(marine) sandwiches (kind of silly, I know).  I also bought two Emerald Break booster boxes because I wanted the promo full art Steven card!  I got some pretty nice pulls, despite not getting a single Rayquaza between two boxes.  Reuben had fun playing in the mess I created. :p

I got my Spring Secret Swap gift back in April, and my gifter was

poliwhirl!  I know I was a hard person to find gifts for, but they did a great job of finding stuff of my favorite Pokemon that I didn't already have.  I got a small tote from the previous PokeMikke promotion (perfect size for bringing my lunch to work), a neat Gengar plush keychain that has a restractable cord, a Mega Blastoise zukan,and some really delicious fizzy Coke-flavored candy!  I especially liked the card they drew for me because Pokemon+Sweets is pretty much my most favorite combination ever. <3

Other gets in April included: Blaziken line zukan pieces (mini grail!) from

kriscarmi, Steven and Cyndaquil keychains and a lovely drawing of my favorite ghost-types from

aarux, shiny TCG from a GA that

pegasus2010 hosted, the community pathtag from

akeyma, and a SUPER ADORABLE Pilot Slowpoke mug that was part of my birthday present

Finally, now we're covering gets from the months of May and June (whew)!  My biggest (literally, biggest) acquisition in May was the newest Wailord plush.  As soon as I saw it pop up on PokemonCenter.com, I was like, "Yep, definitely getting one"....... but what would Wailord be without Skitty?  I ended up buying the Secret Base Skitty to keep Wailord company. ;)  They like to take moonlit walks (don't ask how Wailord walks... apparently it just happens, according to the HGSS games) along the shores of Mossdeep City and share a bucket of pokepuffs while watching a movie.

So earlier in this post, I mentioned that Pokemon+Sweets is pretty much my most favorite combination ever... the second PokeMikke promotion was pretty much exactly that.  Not to mention that my beloved Slowpoke was ones of the featured Pokemon!  I placed another order with

kitzune and got a PokeMikke cup, stickers, and notebook, along with a Diglett Petit plush (Diglett isn't even one of my favorite Pokemon, but c'mon, it's a Diglett plush!) and ghost-type tote bags.  I think the tote bags probably aren't strong enough for me to use on a regular basis, so I might end up pinning them onto my walls.

And then there was the shiny Mega Rayquaza plush that I bought as a birthday present to myself......... but it didn't show up until a month and a half after the seller shipped it, thanks to USPS. >_<  I watched the tracking status go from Japan, to Chicago, to....... the UK.  And then to an Army Post Office.  (Hint: I live in the US and I'm not in the military.)  And then it just languished at the APO for several weeks and USPS couldn't be bothered to tell me exactly WHY it was at an APO.  Eventually, the seller opened a claim through Japan Post, so I guess that gave USPS the butt-kick it needed to get my poor Rayquaza to me.  Venting about USPS aside, the Mega Rayquaza plush is a very lovely and detailed plush... but definitely not the best plush for cuddling!  I accidentally pulled off one of its streamer-things and had to sew it back on. :(

The end is in sight!  We're ending this collection update with a small Halloween treat bag from

kidgengar, Pumpkaboo metal figures from ebay (the seller had the other colors as well, but I was reluctant to pay $20 just for the gold one x_x), a bunch of rare TCG cards that I bought when my go-to TCG supplier had an anniversary sale, and some sprite badges of my 5th gen favorites from

hantsukihaunter.  If you made it this far, pat yourself on the back.  Thanks for reading!