Gets and 1 Year Anniversary Collection Update!

So it has been 1 whole year since I joined this wonderful community late last May. And boy has my collection expanded and changed! So first I'll show you my most recent gets, and if you would like to take a tour of my whole collection, you can stay with me :D But know, that cut is suuuuuper image heavy :o There is also a comparison shot of 2008 and 2009 Vaporeon pokedolls if anyone is interested in that sort of thing :P 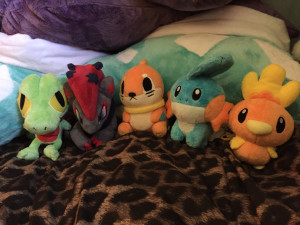 Ahh so many cute gets! First off, finally my starter pokedoll collection is complete now! I was waiting for the PC to re-release pokedolls of the Hoenn Starters with ORAS, but that never happened, and being the impatient collector that I am, I bought some of the older ones. Treecko was a lucky community purchase and Mudkip and Torchic are both 10th Anniversary pokedolls from Y!J. Zoroark and Buizel are both from the lovely dezi_kitsune. And Buizel is super special because it is only the second velboa pokedoll I have. Before, I was dead set on not having any velboa pokedolls aside from the necessary Mew, but Buizel won over my heart with its huge cute eyes and chubby little body <3
And now, amiibos 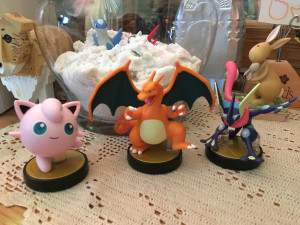 So I've pretty much been only collecting the Pokemon and LoZ amiibos with a few exceptions, and these babies finally arrived! Charizard is my trophy from the in-store preorder GameStop debacle months ago and Jiggly and Ninja were lucky amazon.de preorders. So glad everyone arrived alright :D
So, this new wave of amiibos more than doubled my Pokemon amiibo collection, as I am sure it did for a lot of us. So here is everyone together! 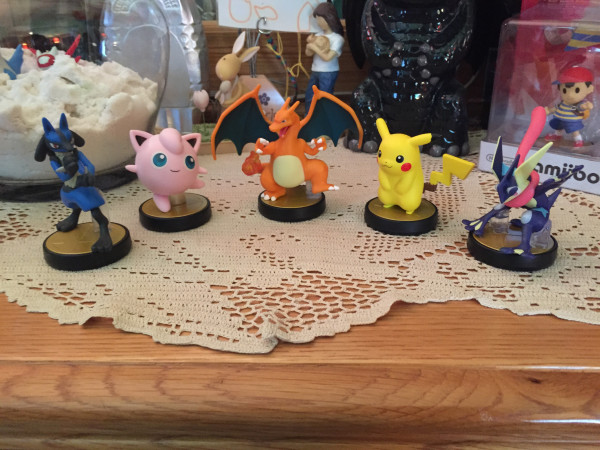 Now I'm just waiting for Mewtwo! Hehe and that's why there is a Ness hiding back there all minty. I am hoping when Mewtwo is inevitably the hardest amiibo to track down, I can trade my Ness for him. And here is a better look and the Latis hiding in the back left... 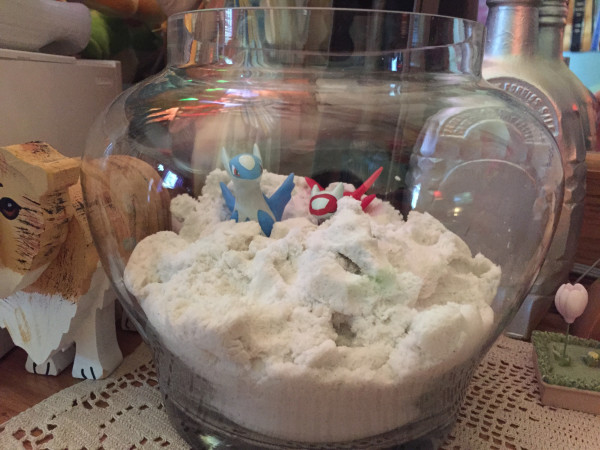 Its my new little Lati terarrium! Well, sort of. I had gotten a plush lot from Japan a while ago and it came with these two kid figures. I don't collect any figures besides amiibos, but being two of my favorite legendaries, I just had to keep them. I had made an unrelated impluse purchase of some funky sand called Sands Alive because it is so relaxing to play with as a de-stresser, but had nowhere to put it. When I inevitably killed my terrarium, I emptied out the jar, filled it with the Sands Allive, and put my two little kids in it! Now it sits on my dresser and I just love it! So easy to play with the sand and now the kids have an official place in my collection.

Now, its time for the chubby little mosters, my pokedolls! My collection has expanded a lot, and with all my new babies comes a bunch of reorganization. However, this display stayed mostly the same. My Eeveelutions and thier matching DX counterparts (except for Sylveon, thats the Talkie Sylveon). Above them on my shelves are my beloved 10th Anniversary Johto starters, then my personal favorites, and the Latis. 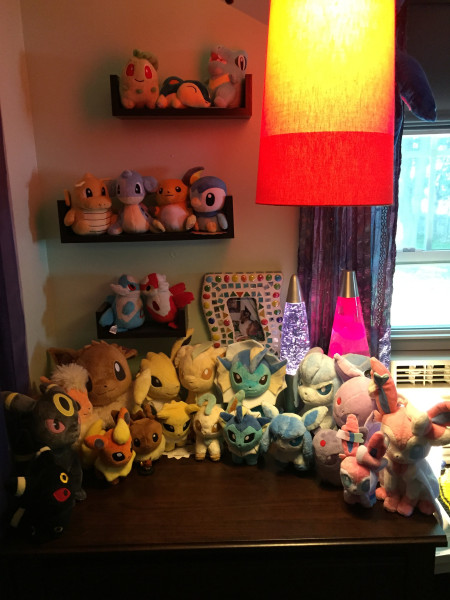 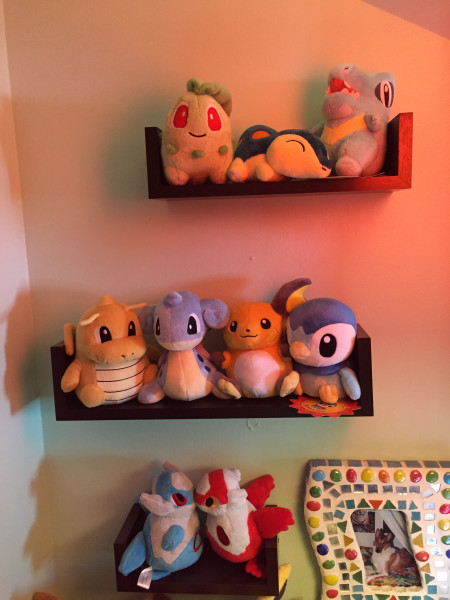 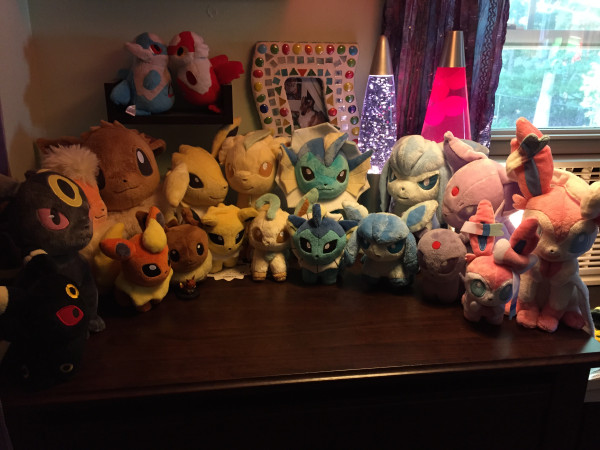 After them is my new shelf! I couldn't help but organize them by color. I had seen so many pretty color organized collections here that I had to try it myself, except for my miscelanious top shelf xD 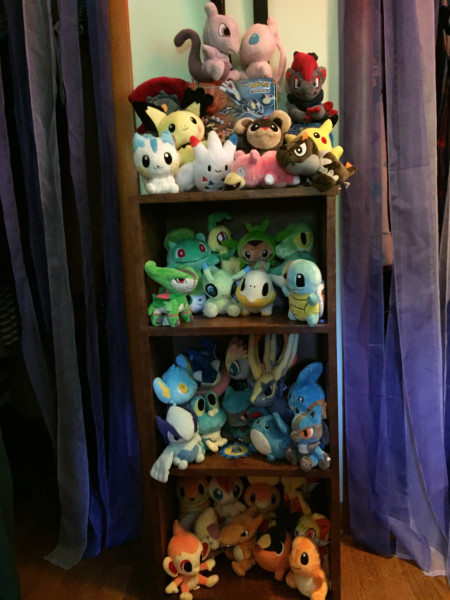 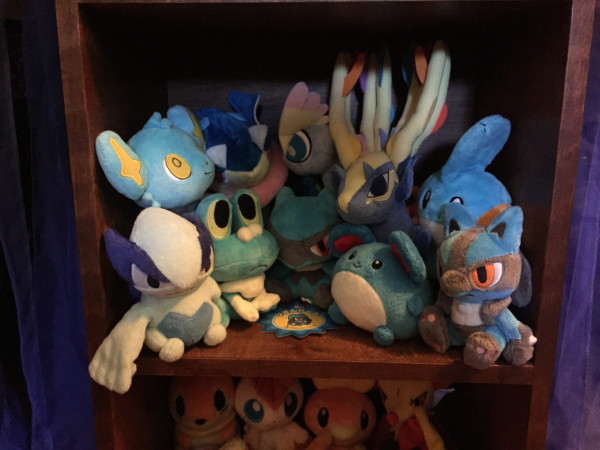 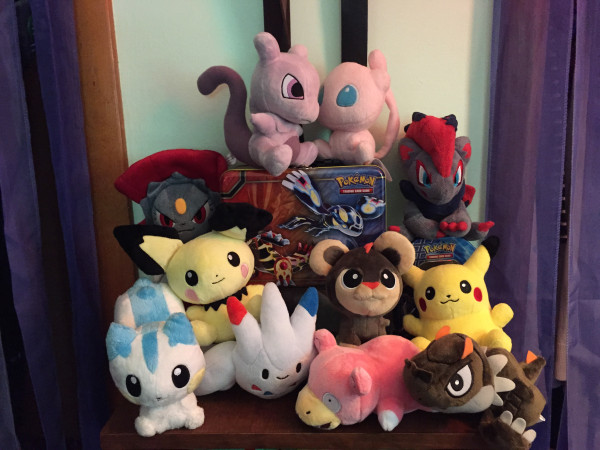 Unfortunately not all my pokedolls fit in those two places, so the rest of them are scattered with some other plush, oops haha! 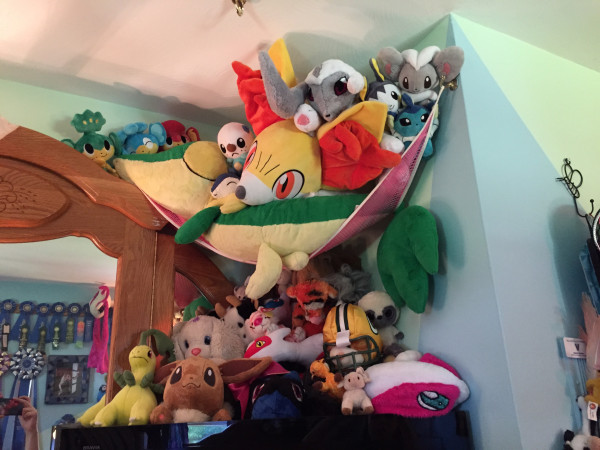 Yeah, I MIGHT be running out of space, lol! A lot of these are customs that I have made too. Big Lulu, my Shiny Lugia, is holding everyone up behind the TV, and next to her is my girly Riolu. Up top, that Cyndaquil is actually a custom pokedoll I made before I was finally able to track down the official minky one. And then my cutsey Absol with her paw out is up there as well. And yes, I have two minky Vaporeon pokedolls. One is a 2008 and the other is a 2009. I was afraid I wasnt going to win the first one, so I bid on a second, and ended up with both. However, when I got them both, they look so different stylistically being from differnt years, so I kept them both.  My 2009 is such a faceplanter, he wont stand up for anything, so I put him up in the net. Its funny because my 2008 is one of my sturdiest standing pokedolls and even supports my Glaceon from flaceplanting Here is a better comparison ^^ And here is my other miscelanious shelf! Its hard to see them, but thats the McD's Larvitar and Phanpy way in the back, then the Tomy Johto starter plushes, and then my Buneary pokedoll and custom Poochyena pokedoll. They don't mind chilling with my Guardians of Ga'Hoole Beanie Babies and WWF Turtle. And you can just see the start of my cow plushie collection below. And how could I forget my Legendary Beast collection to the left. I guess you can tell I love Johto <3 We are getting to the end of my collection, I swear! Now its time for some 1:1s :D
So this is where my I made my biggest organization effort. I wanted to move most of my 1:1s of my bed and the boxes they were perched on over to a shelf. After raiding the computer room for a good bookcase, I rearranged my whole room and campe up with this. It was do hard to get a good shot of the whole thing so its in two pieces, the bottom and then the top. And I have to say, the sleepy Fennekin and Tepig shelf is my favorite. They are just so cute snuggling together! And its a good shot of my restored DX Skitty. When I got her from eBay, the pom poms on her tail were missing. After buying a few different packs to ge the colors as close as I could, I sewed on new pom poms for her. 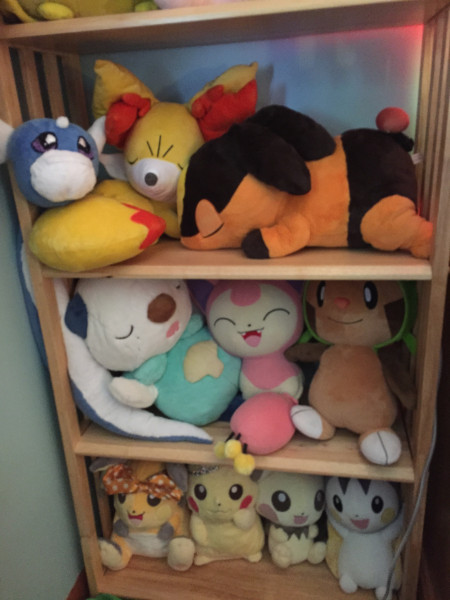 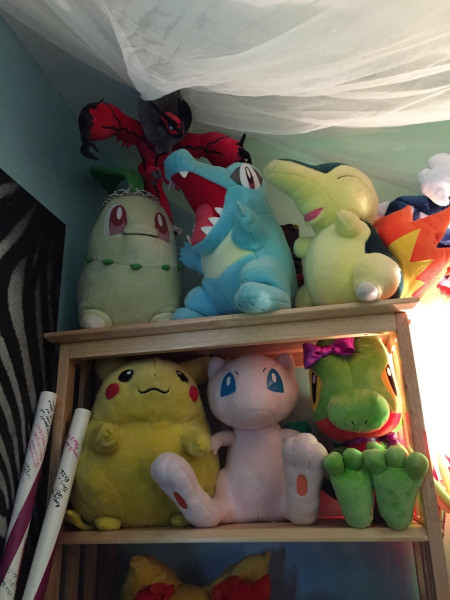 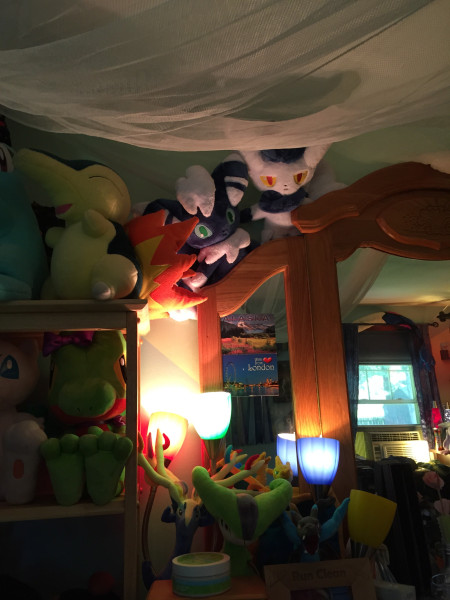 And this shot hasn't changed at all, but I just love my Millie so here she is again, guarding my window. 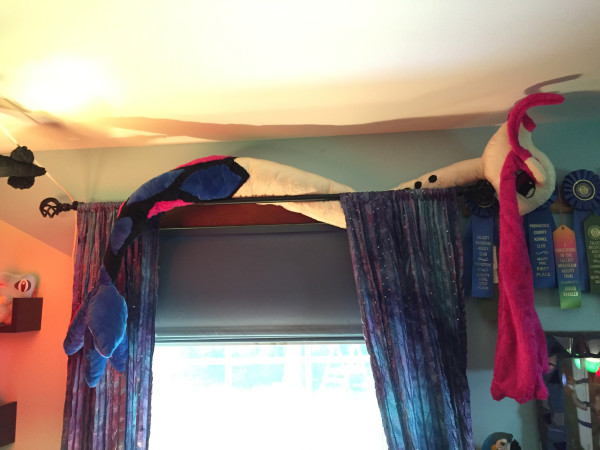 Maybe its not so wise to have an agent of destruction hovering over my bed, but oh well, Yveltal looks so cool up there. Maybe Pika balances out his negatvity somewhat xD. And last but definitely not least are my snuggle buddies, Swee and Pyp. Well, that's the end of my collection! Thanks to anyone who made it through :D
And lastly, I still have some cool stuff for sale over on my journal!