All remaining items are for sale at their starting prices.

Today I bring you some brand new postcards (PokePark, movie specials, Trading Card Game, Mystery Dungeon, Banpresto), some Eeveelution merch, movie promotion merch, legendary Pokemon merch, Pokemon Colosseum & XD merch, gashapon items, and others. All except the Shadow Lugia giant card is brand new, never been used, or simply MIP. There's a lot of neat little goodies in this lot featuring some popular Pokemon so be sure to check it out!

stalkingsuicune - I think you have the Suicune goods in my post but tagging you just in case! There's a Weavile page too.

aceattorneygirl - It turns out I didn't have the Torchic Charm (must be in another set) but there's another Torchic figure here and May stuff.

agui_chan - Tagging for Mightyena (and Poochyena?) and vague image of Larvitar on the back of Celebi pencil board.

absol - For Absol and Mightyena stuff!

nadoki65 - Don't have any of the Sentret or Zigzagoon line up in this post but maybe there's something I missed?

glitterzookas - Lots of Jirachi and Latis!

coiffwaff - Some Manaphy in my sales and 16th movie short & 17th movie merch in auction!

clicky797 - For Articuno and Jirachi!

sadiemeowsalot - For movie merch!
General Info
- I was granted sales permission on December 1, 2013 by

entirelycliched.
- You can find my new feedback here and my old feedback here.
- Items come from a smoke-free home. I own one dog.
- I ship from the US.

*Feel free to combine items remaining from my old settei auction, posters auction, various flats auction, or anything from my permanent sales post and flats from Japan sales.
Auction Info
- Do not edit or delete your bid. Doing so may result in negative feedback.
- No sniping! Any bids left in the last five minutes of the auction will extend the auction time for that thread by 5 minutes until five minutes have passed when no bids are left.
- You will get what you see in the picture. Please ask for more pics if you're unsure about the condition of an item or if you would like me to identify something on the item.
- Bidding will end on Friday, June 19 at 10PM EST. No timer will be provided so please look up the time well in advanced. You may comment when the thread is up. (It might take a while so be sure to check my sales at the bottom of the thread first for stuff you might want!)
Just a note: If you right click on an image and choose to open the image in a new tab, you can view a larger size of the image to see more details.

Never been used handkerchief which was made to promote the 2009 DP film: Arceus: To Conquering Space-Time.

Here's a very sparkly pencil board featuring all of Ash's, Brock's, and Dawn's Pokemon from the Arceus film enjoying watermelon with the other Pokemon they meet from the other world. There's a great summery theme going on here and it's always great to see the Johto starters a few generations later.

A set of pins of the Johto Starters and Pikachu and Pichu with a winter theme. The set forms an adorable picture but I'm splitting this up and keeping Totodile (so he's not for sale). No longer for sale.

Never been used handkerchief featuring the original Eeveelutions from the Kanto region. The handkerchief was made by Banpresto in 1997 and measures about 20 x 20 in.

If sleeping Eevee, Sylveon, and Pikachu on the back cover and the featuring of all the Eeveelutions on the cover isn't enough to convince you to own this piece, let me just point that Umbreon is finally on a piece of merch where he's smiling. And let me tell you as an Umbreon collector, that is very rare! Anyway, this coloring book is surprisingly unused and even has the ShopPro sticker on the back. There's some great poses in here too including features of other Pokemon such as Weavile and others. Basically, all the Pokemon from the mini movie is featured here. Take a look!
Eeveelutions and Pikachu and friends
More poses
Weavile and Gothielle line

Above are 5 postcards MIP promoting the Lugia film and the Pikachu Short. They're brand new and great condition.
Backside

Above are 3 PokePark postcards that are MIP and in great condition.
Backside

Above are 3 PokePark postcards that are MIP and in great condition.
Backside

Two more MIP Banpresto postcards and a four Lenticular card pack. Move them around and you can see the Pokemon evolve!
Backside features Klefki and Diancie

I can't think of the appropriate term for this, but you use it to put under your plate while you eat. This one is MIP except when I took out the contents to take pictures. It's brand new.
Full image
Coasters

A fairly large notebook featuring Xerneas and Yveltal. It's MIP except when I took it out to take a picture inside.
Backside
Inside

A beautiful glittery pencil board featuring the main protagonists in the Jirachi film.

This card measures 14.5 x 20.5 cm. It makes a pretty cool display piece especially if you like Pokemon XD goods.

So many wonderful Pokemon featured from the Pokemon Colosseum game! This is a great piece that comes in the original plastic wrapper. I took it out though to fix the right side because the pieces were loose.

These magnets were promotional goods for the 5th Pokemon movie. They're both MIP and are very precious especially as one piece.

Below is a set of gashapon figures. Each piece is supposed to come together to complete a town but they also function fine as their own separate piece. Each figure comes with an insert as you see below. A few figures were taken out of the packages for better pictures and to show the function but they are otherwise MIP.

Most of these figures (all except Mightyena I believe) have a magnet below so you can move them around using the levers. Watch the video below to see Absol move in an out of the PC.
Absol outside
Absol inside
Watch the video of Absol being moved inside and outside with the magnet and lever power

Mightyena Standing on Tree - Starts at $6

I thought I've seen it all but this figure proves me wrong. I'm not even sure how Mightyena is standing (sitting?) on that tree or how it would ever be possible for a *real* Mightyena to pull off such a feat, but hey, Pokemon logic. It comes with the road seen in the picture.

Jirachi also has a magnet and it's supposed to go in and out of the Pokemart but I didn't think about that when I put this one together (it was the first one) so I didn't actually stage this one properly. But you can if you win it!

Pikachu can actually be put inside the car according to the insert instructions.

The trailer attaches to the back of the truck that Dusclops comes with (I believe) since it has a hitch.

He also comes with a tree and road if the picture doesn't make it obvious already.

The next set of gashapon figures are phone charm straps with Pokeballs that light up. These are all brand new and MIP (I would have actually had to tear through the plastic to get them out but I didn't). The plastics appear to still be inside the Pokeballs so they should be able to light up when you remove them.

And I finally got the scans up from the HGSS Sticker Booklet. You can find them on my website. I'll tag the people who specifically requested to see them last time.

I also added some stuff to my permanent sales post. The flats (including other postcards) have been added to my flats from Japan sales post. 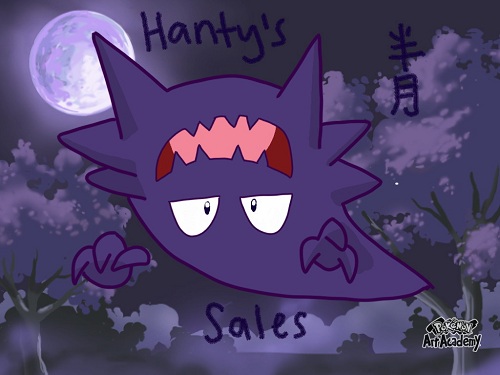