I'm trying to clear out my collection so I'm getting rid of tons of cards and other pokemon merchandise!
you can view all of it and all card at my photobucket link. All cards individual you can make me an offer :) Or for a quick sale I WILL ACCEPT $30 shipped for all cards!

I am only accepting paypal right now, sorry , no echecks and no trades


MORE items for sale in my shop journal here-
http://missmoonsault.livejournal.com/676.html

http://page.auctions.yahoo.co.jp/jp/auction/c157670276
You will be billed for the item + all applicable fees and shipping charges in the next days.

So as promised, Bidding will end in approximately one day from now, at 12 noon GMT.
I may not be around to stop the auction at that precise moment, but every comment will have a timestamp on it, and in the interests of fairness I will reject any bid put in after 12 noon.

I randomly found this:

Click the entry, and scroll down a few pictures - there appears to be a girl in the front row holding a Zangoose PLUSH - anyone know anything about this?

I don't care for the pokemon, but I thought it was neat. ^_^

I just wanted to post to let you know that I have 2 figures of Jesse & James up on ebay.
I used to love love love them, but I need to get rid of some of my things.  I should also be putting up a team rocket lunch box later this week too! Anyway check out the figures.

Thanks! And check out my other auctions for more anime collectibles, DVDs and manga!

So, last night around 11pm, my mother went to "RiteAid" pharmacies to drop of a prescription for my younger brother. When she came home, this was in her arms: 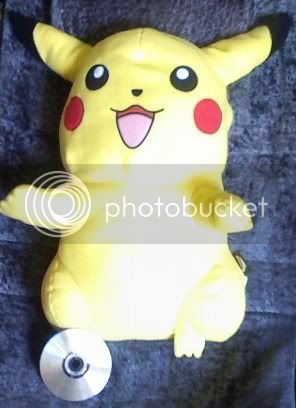 (The CD is there for size reference)

She said they had a ton of them for sale thanks to the comming easter season, and they're going for about $19.99

Thought I'd give y'all the heads up 8D


Also, I have some cards for sale. They're almost all common cards, but I figured someone here may want them 8D On the up side, they're all in mint condition.
( Collapse )

I also have some figures for sale, too.


Prices can always be negotiated, and if you have any questions, feel free to ask!

Thanks for looking, guys 8D;

warandromance I got your package today! Thank you so much! The little smeargle is even cuter in person.

Photos under the cut!

In order to avoid spamming the community, I've got a few things to take care of. I'd contact all of you individually, but I've been having a really bad day so I'd like to get this all taken care of now. :]

Firstly, I'm holding a few items for people, most of which arrived today. I'll be making a sales post sometime later this week, so we can work out the details then. So far I know I have items for:

blackjackrocket [The items I have for you aren't here yet, but I should be receiving them in another week or two. I don't want you to feel forgetten or left out. ;D]

Secondly, people who won some recent auctions, your packages are on their way! Expect them in 1-2 weeks.

mrshellsing420, your items will be mailed as soon as your e-check clears!

kari_xiii, I mailed out something for you today as well.

Thirdly, I received packages from many of you in the community lately, including

eeveelution. Thank you all so very much!

Fourthly, I had a terrible set of tests earlier today at the hospital, but I felt a little better when I saw that my latest SMJ shipment was waiting for me when I got home. I've included some of my collection updates, including what could be called the two most sought-after items of my Jirachi collection.

And last but not least, I'm going to have another large sales post sometime soon. It will include some awesome kids figures, zukan sets, and plushies! ♥

If you have information or photos, please email growlythebear@gmail.com
*crosses fingers*

I hate to clutter the community with what might seem like a gratuitous bump, so I'll keep it brief: I forgot to include one item in yesterday's sale, so I added it. It's a Groudon! I haven't yet shipped the items people have bought (tomorrow!) so you can add it to your order if you so wish.

Apologies, and thank you!

hello. norkia today i got your package! were pokekids always that small? anyways it's awesome and adorable, and the cute little dratini pic is also adorable along with the coolio meditite freebie card *joy* (hehe).

phoenixxfoxx, your package came about the 24 or so of february i kept forgetting to post here but yes it came and it was adorable. that art on the box did you draw that? it wins ^^.

two or one people i was trading cards with (sorry forgot usernames) i haven't recieved your cards yet. i've been checking both my moms house and my dads and no sign of any. (which makes me sad since they looked really cool) i'm positive i set my half of the trade, and i read a post that one of you sent out your half but i have not recieved anything yet.

ok i'm done now, you can go along with your proper buisness of being cute little pokemon fans. (lolzs)

Howdy all! I'm kinda new here [was shown this place by miss fernchu] and I'm weeding through some of my older and rare cards and trying to make some extra money to feed my pokemon kids/zukan obsession!

Please click down there to check out whats for sale!

Selling tons of older Wizards of the Coast cards! Including Lilly Pad Mew, Birthday Pikachu, and Reserve holo Rocket's Mewtwo! Plus much much more.

Thank you all so very much! I'll be posting pictures of my collection soon. *^_^
Collapse