Hi, everyone~! No collection post yet, hopefully soon, but instead I'd like to share some links of auctions my BF put on ebay, they're extras from our SMJ box~ {yet since we're LDR, I don't actually get my stuff til later bah ;;!}.

The shipping is cheap since he's in the USA- $5 for Raichu, $7 for the Pikachu/Pichu bundle. Click the image to go to it's auction and thanks for looking~! 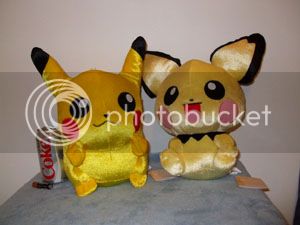 can we make 'ufo catchers' and 'pokedolls' tags please? Especially if we have 'bell plush' D;

So now that the Shaymin Sky Forme is now announced...

How many of you are going to start collecting this little grass reindeer? :D

"Pokemon USA, Inc., and Burger King Corp. today announced a promotional partnership that will bring popular characters like Pikachu(R), Darkrai(TM), Dialga(TM) and Palkia(TM) to children around the world. Participating BURGER KING(R) restaurants worldwide will offer an exclusive Pokemon Trading Card Game (TCG) card and accessory with each purchase of a BK(R) Kids Meal. These BURGER KING(R) restaurants will be the only place where children can obtain each of the 12 different Pokemon TCG cards and accessories. The promotion will run from July 7 through August 3 domestically and throughout the late summer and fall internationally."

So, I just noticed that I have an affinity for poison type pokemon, lol. Anyway, I got some new stuff in last week.

Finally got around to taking pictures of my Illumise.

Also, a couple more i'm less proud of but I'll share anyway. (These two are not for the contest)

All these are made with felt, and details are done with paint markers and Sharpies.

The last of the Pika plush I was waiting for came in the mail yesterday, so an update is in order. :) I've been VERY patient with this update and it's paid off. Without further adieu, here is the main reason why my rooms are running out of space. =P

Do they make skins for the Wii? I would rly adore one that was pokemon related because, along with any other nintendo game system I have ever owned have only been useful for Pokemon games.

Would love any help <3

Hey there everyone! Long time lurker, finally a poster here!

I was thinking about setting up a post within the week, hopefully, of some Pokemon cards from the 2nd series ever released, the Jungle set. My plan was to make up some grab bags for you guys with absolutely no duplicates and at least one rare and holo per grab bag unless stated otherwise, and eventually I'll have a sale post for an entire 36 pack booster box before placing it up on ebay because I want you guys to have the first chance at it.

But the main reason for my post is this: Will any of you guys be interested in the grab bags/box before I start making up my sales post? Just making sure! ;3

Well, today was my birthday, so I got a few Pokemon-related things, one of which I just ordered today and won't get shipped until JULY according to Amazon.com's shipping estimates. Oh well, at least I got the Jakks Dialga-Mothim-Shellos East Sea pack that has eluded my family for so long in stores for only a few dollars more than it would be in the store plus shipping... (that may sound like a bad deal, but believe me, I've seen worse).

Anyways, a little earlier this month, perhaps a week ago, I made a custom Murkrow plush with some crushed velvet and felt that I had laying around from my Mothim bell plush. I am personally quite pleased with the results.

( Collapse )
( Collapse )
So i'm finnaly getting around to showing all of you my Smeargle UFO that i bought on e-bay.
( Collapse )
Also, i was wondering if any body had some Nido stuff they were selling? I have recently revived my feelings for the family and wanted some merch of them, i have almost all the cards.
( Collapse )
If anyone has some Nido merch they arn't too fond of i'll be more then happy to adopt them ^  ^

Also if I've bought stuff from any of you, could i get feedback, please? it would be much appreciated ^  ^, and if i haven't left you feedback please let me know and ill do it ASAP.
here's the link to my feedback thred http://community.livejournal.com/pkmncollectors/30997.html?thread=25934101#t25934101 (sorry for some reason the link insert link wasnt working) :(

I couldn't resist the urge. I just couldn't.

You know the Dungeon 2 anime special? With the adorable Chimchar? I'm a big fan of his. He wears a Defense Scarf, a white rolled-up bandana with black dots on the end ties.

I had to do it to my Chimchar doll too. I just had to see how cute it looked. I had this idea for a few days, and I did it today.


I know I don't have his necklace with the relic fragment on it, but that's for another day. I'll do it eventually.
But I love this scarf. Did it all myself.

Whee, I think I've gotten all the stuff that I ordered from various folks! My Empoleon line collection is off to a good start now. :3

Little update! Two packages arrived really late in the evening and one of them contained...

Hey there, everyone! I was finally able to pick up a package that had been waiting for me over at the post office and got some sweet little darlings who are looking for a new home!

Sales Information and Policies
Payment Method: PayPal only, all forms of PP payment accepted. Please note that there will be a small additional PayPal fee applied to your total. For eCheck payments, I will first wait for said check to clear before shipment.

Shipping: Shipping only within the United States; no international shipping at this time. I am also not to be held responsible for damaged or lost goods once they leave my hands.

Holds: First come, first serve only! I am willing to hold an item from this specific sale post for you only up to 24 hours (not applied to items on sale at

satinshellshop); if I have not received word from you or promised payment after the time limit expires, it will be back up for grabs!

Notice: I am open for trades (no art trades, sorry!), but hard cash payments take first priority. My wants mainly consist of any Skitty, Lucario-Line, Torchic-Line, and/or Cyndaquil-Line merchandise. Haggling is also permitted within reason.

I also still have some other Pokemon delectables over at my online store,

♥ Thanks for looking, everyone! ♥

Hello, everyone! Just wanted to make a tiny collection update post. I'm not a huge card collector, but recently I've purchased a couple of booster packs and pulled some great cards :>. It was my birthday recently (May 28th), and I got some nice surprises from

I'll be making a collection update post eventually, when I get a couple more items I'm waiting for in the mail. My collection has grown a lot more since the last time I posted, so look out for it! Cya around :>
Collapse