Hey guys just wanted to let you know I am having an auction for 2 custom plushies kokoromori and a mini shiny umbreon. Here is the link to my auction hottiehulio.livejournal.com/4019.html

Please come by and check it out :)

See, there's only one good thing about having four post free days.

NOW.
I haven't seen anybody else post this for the comms eyes, but HEY, CHECK IT.
NEW CHUPA SURPRISE FIGURES FOR TO BE RELEASED IN MARCH. The picture, and all the goss from AAPF. Personally, I am so excited for this, since FIRST DARMANITAN FIGURE.
YES PLZ. 8D

I also updated my wants list over at The Sunny Clearing (mah collection website), so if anybody wants my money in exchange for items on that list, give me an offer. 8) Or if you want to trade links, I'm up for that too.
Though in particular I'm searching for just one thing. Y'see, I found the out there was a Ludicolo attack figure a little while ago, using "Astonish" (lame move, but OH WELL), though I didn't see a picture, so I just assumed it was different enough so I could differentiate between regular and attack.
BOY WAS I WRONG.

On the left is the regular Kid, and on the right is the attack Kid. No, seriously.
COME ON. ;;
So, if anybody has the attack Kid to sell, please let me know! I went through all the sales posts trying to find one, but now I'm worried I just mistook it for the normal one. :c Lame.

One last thing. I was wondering if there were any collectors out there who also had ferrets. After like... 5 years, I'm finally thinking of getting them, but I am a bit concerned about how they'll treat my plush shelf if they get up there (and let's face it, THEY'LL GET UP THERE). In your personal experience, what might happen? I know they're not rodents, but I'm still worried they may chew up mah toys. D: Do you have any general advice regarding ferrets and collections?

Kaayyy, thanks for reading. 8D
/end

Hello everyone!!! I have been lurking around this comm since October but hesitated to post an introduction post >__<
Now, I think it's time to introduce myself. I have been a fan of Pokemon since the first gen was released but during that time I was more concentrated on games only. But, now when I can earn some money myself, I start to collect some plushes, kids and zukans.
Someone told me before that collecting these guys would cost you a lot. Now, I have realised but I just can't stop collecting them lol
I promise myself every time I buy a new thing TT__TT

Now it's time to show you guys my recent collections : (Image heavy after the cut... be careful >__<)

It's been a while since I've posted =/ I've just come back home from my trip to New York! It's amazing how much Poké merch the USA has access to in comparison to Australia. I made a few friends during my stay and I was simply unable to part with them....so I took them home with me <3  Here's a small collection update...

sapphire_kun  for the Wobbuffet Zukan and

marphoria for the Jakks Wobbuffet ~)

Hi everyone! how are we all?

Just a quick reminder that my auction for this shiny charizard plush ends in a bit over 2 days so make sure you don't miss out if your interested.

sukui dolls are here!!!!! and i have photos!! and i will TRY to have all 70 paid for orders sent out today! i've got my factory all set up to begin packing right after i post this (you can see it in the photos XD) :D

>>>>ADD YOURSELF TO THE SUKUI DOLLS LIST!!!<<<<
only 5.50 per doll!!
super cute and unique!
cannot be bought in stores!
we still need quite a few zekrom, tepig, and zoroa takers to order the next batch!
CURRENT WAITING LIST! feel free to ask for multiples if you want to reach the quota XD


payments i am still waiting on!
if you are on this list but paid, please do let me know!
and those of you who spoke to me are still cool :)
my paypal is denkimouse (at) gmail.com, make sure the subject includes your LJ name and the pokemon you ordered!

First, I want to apologize that I haven't posted in forever! Blah, life has been hectic with college starting a new quarter and the holidays and all this craziness. I'm posting a full collection update later today (I've decided that the first Friday of the month will be when I do them). However, I want to wait until I get my nice camera from my friend's house.


This custom I just got in the mail couldn't wait, so I used my shitty camera phone. xD

The story begins 3 weeks ago, when I was browsing Etsy and found this guy for sale and a price that was truly a steal. Fast-forward to today, and I have already purchased and just received the package. I opened him and fell in love. ;;

SO HERE HE IS, LADIES AND GENTS:
( Collapse )
A long overdue update will be coming later in the day. Until then, group, have a great day! :DD

Hey everyone, Happy new year!!
I went to PokemonCenter on Jan.2.
This is my first PokeCen shopping 2011. :D

How big is the pillow?

Hello All!
Im back from my trip to Tasmania to vist my family for chirstmas!
and i had a few goodies when i came home!
Hurrrr They Are! Mespirt Banpresto (no butt tags), Uxie Banpresto (No butt tags) bought from a lovely GA on this community! thankyouuuuu!
Totodile Banpresto - my lovely boyfriend got up nice and late to bid on this guy for me for a christmas present <3
Hasbro Gyarados - Thankyou so so sooooo SO super much Marphoria i love him!


andddd WOAH these babies! i am in love! they are fantastic! and also recieved the Pokemon Pocket Pokedex Vol.3: Prima Official Game Guide off my best friend for my 21st :D Thats all for now folks!

Hope you had a fantastic christmas and happy new year!
x

Sales Reminder!
I still have a few Pokemon Black and White Collection Cards left.
I'm selling them for super cheap so here's your chance to pick these up before the English one's come out the prices go up.

Any order before 3:00PM I will ship out that same day.
My father is getting back from Japan in 2 week's so I'll be posting the stuff he picked up for me at the end of the month.

Hello to you all!

Since I don't post often, I thought it would be okay to do a re-introduction.^^
At first sorry for my, sometimes, bad English. XD Please don't mind it.

Let's begin! My name is Stephanie, I am 18 years old and I live in The Netherlands. A country where is not many cool pkmn merchandise. The coolest thing is that we have ''European'' Pokemon kids figures. :)  And sometimes they have cool European exclusive stuff, but it does not happen very much.
I am VERY happy that we have got a store in Amsterdam which imports Japanese Pokemon stuff, like Tomy plushes, figures, zukans and more! =D I buy regulary stuff from them, since it can help me getting cool merchandise.<3

My all-time favorite Pokemon are:

Wargle is also getting close, but I am not sure yet. xp What is sure is that I want his merchandise!<3

My collection ''behaviour'' is that I don't collect everything from my favorite Pokemon. I like Pokemon in general and I buy what I like. :)

Click the cut and I will show you my collection!^^

Comments are always welcome, I just love them!<3
Have a nice day everyone!^-^

time to vote, my dears!!

remember, only vote once! i plan to keep voting open over the weekend until monday, hopefully most folks will get a chance to vote by then. enjoy looking over all the entries, you guys are all truely fabulous, this is one of the biggest turnouts we've had for our annual contests!!

looking these entries over has nearly brought tears to my eyes. they really are that good and that moving, and i thank you all so much for being the folks that make this community amazing.


now, on to the voting! pick the number of your favourite! don't be shy!

thanks again you guys -- and be ready for the next contest?! maybe hmm... a BELL PLUSH CONTEST? :D we'll see...

What could have frightened these celebis?!?
( Collapse )

so i made a plooshy thats up for offers


and my WANTS, but this specifically:

help (left)celebi get his friends back

I'm in Santa Cruz right now and will be going to San Francisco tomorrow and I was wondering if there were any good pokemerch stores there?

Also, I'm looking for a Feraligator UFO plush, the luxray UFO plush, and hasbro electronic lugia (grail). If anyone has any of these that they want to sell then ill throw money at ya ;)

My name is Kate, aka Bloohyena. I am 20 years old, and I live in the middle of nowhere, Illinois! :D
I Collect Raichu, the Regi trio, Pokedolls, and a bunch of other random things here and there.
I joined PKMNCollectors in July of 2009, and I kind of fell out of collecting, and the community a while back due to loss of interest. SHOCKING, yes.
But I'm back! And I've brought my collection with me!

Please note, that all my photos were taken from my phone, and I'm aware that they may be blurry.
Please excuse my FAIL-tography.
( Collapse )
Thanks for looking! :D

Hey all,
I've been looking for a Pikachu pencil case, and I've found the one I want .. somewhere on this site. Would someone please please be able to help me get to find a place where I can purchase this pencil case?
http://pics.livejournal.com/nanoplasm/pic/0007bxkw/
Or even something similar to it?
Any help would be veryyyyy appreciated ! :)

Hello! Just letting you know that my tiny pokepainting commission slots end in an hour and a half from now! :) Click the banner to go!

I will be making a permanent sales post in that journal sometime in the near future and will let you all know about it. 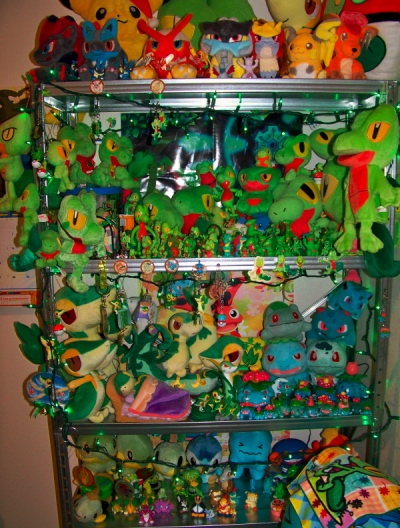 Hello everyone. I got an exciting plush in the mail yesterday and I realized that my collection has grown significantly in the past couple of months so I thought I would make a post =)  The images are a little big so please hit the jump!