I know this doesn't deal with Pokemon but this deals with ALL of our PKMN collector friends that LIVE in Japan!
I hope you all are OK and SAFE after the Earthquake and Tsunami. I am thinking of you all!!!!

Hey guys! Just a quick reminder that the offers on my TWO COMPLETE DIAMOND AND PEARL ZUKAN DIORAMA, UMBREON AND ESPEON MIP ZUKAN, CROAGUNK/TOXICROAK RARE PUFFED VARIANT ZUKAN and my POKEMON CENTRE RAYQUAZA JACKET will be ending tomorrow! Dioramas are still at their starting bids! Don't miss out! We have also slashed prices on the rest of the zukans available for straight sale!

We have also added some new kids, zukand and the newest garchomp battrio coin! Come check it out!

click either the banner or HERE to be transported!

If you have your eye on something but low on cash, I am also accepting trades for cards on my wishlist! see here:

I will also buy these is the price is reasonable! Don't be afraid to chuck offers at me!

Thanks for reading and many apologies for the boring post! Thanks <33

Alright guys, if there was ever a time to buy a charm, now would be that time!

While I can't offer any new Pokemon, I'm going to offer any Pokemon I've drawn before (find pictures here) for $5 each (plus shipping), and every single penny will be donated to helping Japan restore its home.

I have decided to donate $500 of my own money towards this cause already, and I hope you will consider contributing as well.

** to those of you who are still waiting on custom charms, I'm doing my best to crank them out. A recent medication change has left me with trouble gripping items for too long, but right now I'm working on about 2-4 per day. Anyone from my previous charms post will not be charged extra shipping for additional charms purchased here.

Thank you to everyone who contributes and sends best wishes to those of us in Japan! We'll get through it!

Other ways to help:

EDIT Thank you everyone who has donated to the cause! As of now I will be taking a break so that I can print and cut out the current charms, but I will be back next week with more openings!

And I am still looking for payments from this post for the B&W stickers sheets! :D

I know LJ has been eating comments and then barfing them back up in your inbox a few days later so I understand it's very possible you didn't see my replies! ♥ :D

I am looking for payments from:

You can make payment to: bunnieofthemoon [at] yahoo.com

As always thank you bunches guys~! ♥

Granted sales permission on 02/14/11 by dakajojo

This GA will be ending in about 7 hours! We're still a bit away from the total we need to raise, so get your bids in now!
Countdown timer here

So, I've gotten a few packages over the past month and I figured I should do a collection update before I go back home for spring break (that starts today! Whoo).

( Collapse )
So remember someone wanting and searching left and right for these guys, and I don’t know if it’s been discovered, but a Sitting Bibarel UFO plush has been pretty much hiding in someone’s eBay store! EDIT: Wow, I found at least three more on (Singapore?) eBay!

Hello fellow collectors! I have accumulated much in the way of Pokemon, and need to make space for my (ALMOST FINISHED) gen 1 zukan collection :D

( Collapse )
Thanks for looking, and best wishes to all in Japan <3

Just a quick reminder that I'm still taking orders for the new B/W merchandise at the Pokemon Center kiosk.

All previous orders have been shipped out, with the exception of two international orders and one order I received the address for late. The three remaining orders will be sent out tomorrow; they would have gone out today if Comcast's internet hadn't decided to go down for five or six hours in our area of Seattle. @_@


To make this post more interesting, here is the pokedoll-style Whimsicott plush I've been working on since a week or two before the official pokedoll's release (in the photo his eyes/mouth are placed on, not attached, so please excuse their strange appearance):

He's more complete now, with most of the poofs attached to his back (he looks much less bald!). I'll post again once he is complete, but I'm working on him on a limited time frame along with a Slowpoke plush I'm making for Sam's birthday (which is tomorrow) and playing white version.

I don't know when I last posted a collection update, I've been trying to get as close to completing my Lugia plush collection as possible before displaying them here. Well thanks to

safir_hime, I am now only TWO plushies away from owning the entire set ^v^ (so far) So here is what it looks like as of now:- 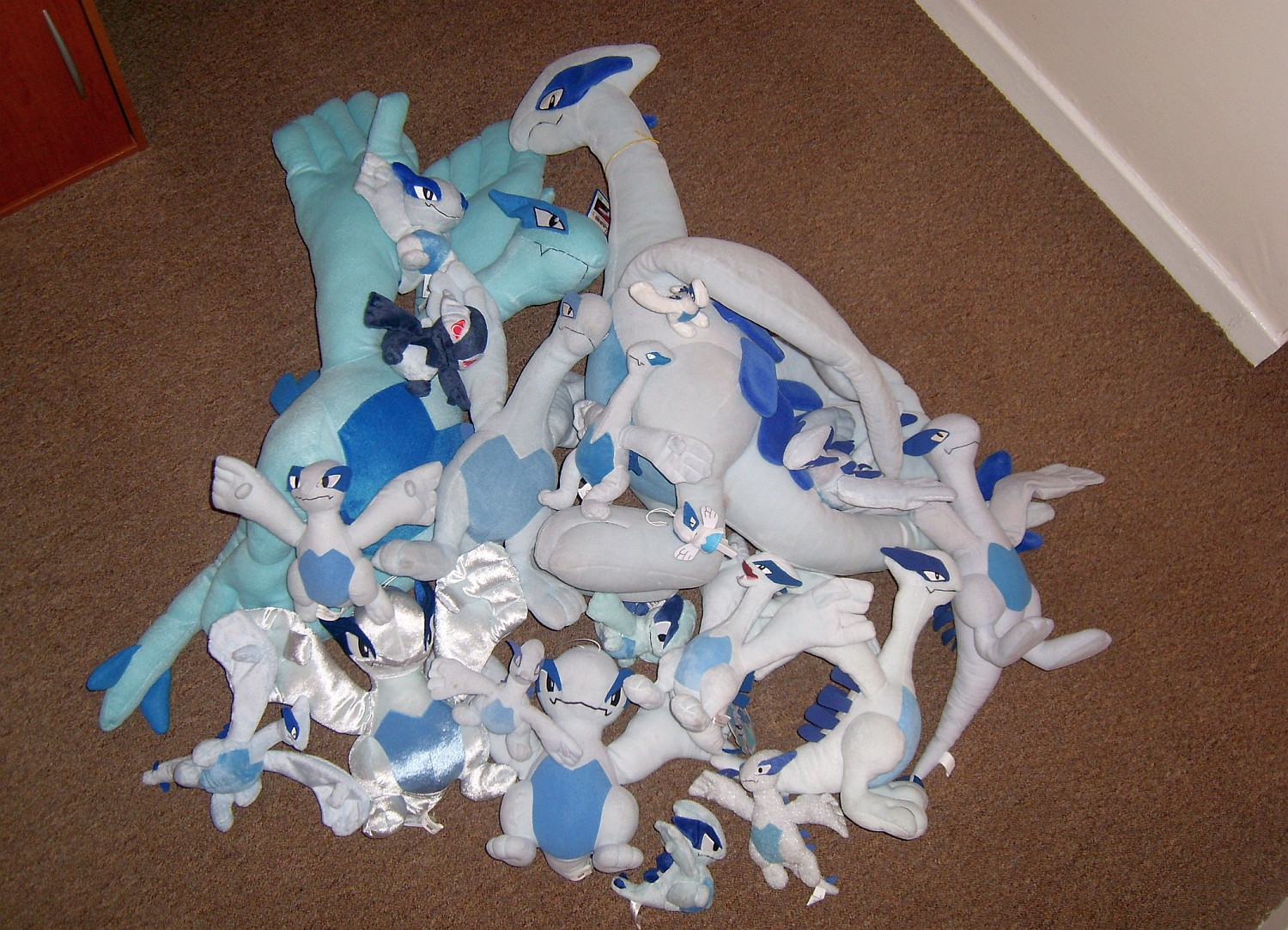 Hey guys! A few people here may remember when I used to make cupcake plushies.
I stopped taking comissions for them a while ago and just made them for friends.

However, for a very special cause, I decided to open 10 slots.
100% will go to the vicitms of Japan earthquake and tsunami

I've no idea when I'll reopen again so if you want a cupcake plush in the style of your favourite pokemon, this is your chance as well as to raise a little bit for Japan, the country that gave us Pokemon
( Collapse )
( Collapse )
Quotes starts at $20 and will increase per difficulty although most won't add. I can either recreate a pokemon's facial feature, add a specific feature to the icing (i.e. a logo or a gym badge) or even if you want just a plain old cupcake :D Also bear in mind some pokemon may not translate well to this form either whilst others may be far too complicated (such as the Unova legendaries)

In the comments, just say which Pokemon and which style and I shall try my very best to accomodate you!

taycs - all profit is also going to Japan - find them here

Hey guys C: I have a couple random questions today - first off, what kind of Emonga/Emolga merch is out there? I have the Pokecen plush and know of the 1:1.. Does anyone have one of the figure straps for sale? How about Pachirisu figure keychains/straps? Denchura/Galvantula clipping figure? :D;

Second, is anyone after a Magikarp pokedoll? I should be getting one in a lot soon - I don't know the condition yet but if anyone's interested I'll let them know when it arrives if you'd want to make an offer then!

Hey everyone! Tomorrow is the big day! Just a reminder that we're meeting at 12 pm (noon) at the Rainforest Cafe!

Picture of the prize wheel being set up!

If you're going and not on the list gimmie a shout and I'll add you! Hope to see everyone there! I've got (limited) freebies for members! :3

Alrighty people! This one is a little reminder on

There are also some new added items! C:

Here's the link to the GA: community.livejournal.com/pkmncollectors/8628326.html
Thank you for viewing! <3

I know a lot of us use deputy services as part of our Pokemon collecting resources and so I thought it would be appropriate to share some messages in regards to some of the service providers in light of everything that has gone on.

Celga on a whole are doing fine and for the most part, it is business as usual with shipments being made. There are, of course, potential changes to their service in the aftermath of what has happened in Japan in relation to the affected areas.

RE: HARDROCK-POKEMON.COM as initially confirmed by

Hardrock-Pokemon.com and Brian Grabow are doing fine as their location is down south rather than up north.

RE: NOPPIN/CRESCENT TRADING as initially posted by

Noppin/Crescent Trading Inc. on a whole are doing fine. Despite this, there are potential changes to their service in the aftermath of what has happened in Japan.

RE: SMJ as initially posted by

Aside from a few toys knocked about, everything seems to be fine at SMJ though shipping delays are to be expected.

RE: TREASURE JAPAN as initially posted by

As Treasure Japan is located down south, everything seems to be fine though there will be changes made to their services and what they will or will not offer.

RE: THOSE WE HAVE NOT YET HEARD FROM:

Mods, if this post is too OT, please feel free to delete it and let me know.

I just thought I would share this in case anyone missed the updates on the various websites during their most recent updates.

So I went to Target today and the new Jakks Plush are out! (the series before the new black and white bunch)
Sadly, they are all a bunch of repeats like we all feared.  I picked up Pachy because he was a different pose. No Zorua though :(
Sorry Both Jakks Pachirisu and a Poke comic! Hooray for bigger collections! I also bought the Mijumaru card tin. The Oshawott figure is great.
I am also in love with Victini now. Someone give me a plush of him :D

I have a Leafeon Jakks for sale nagaineko for attempting a GA of my sales. For your hard work I offer you two free shipping on anything in my store <3 If anyone had their heart set on anything from the GA my sales are here:
http://aleyina.livejournal.com/20056.html

I am glad to hear everyone in Japan is safe. My heart goes out to the families that lost loved ones.
Collapse