WELL Fizzycat butt found this awesome lot on Ebay! And we figured to GA it since there might be some interest in it! :D

I'm a rather quiet sort of person in Real Life so I've never been too terribly great at things like introductions/talking about myself so please excuse the lateness (and any awkwardness) in my introductions post.

psychobreak and my strongest tie to Pokemon (and therefore this community full of Pokemon collectors!) is all because of this purple-colored Psychic guy over here:

I was a bit on the older side of things when Pokemon first came out and as a result, I was feeling out of place amongst the mostly-younger crowd and trying to figure out what to make of Pokemon while riding on the coattails of my younger sibling. Then came the first movie and with it came Mewtwo and well... the rest as people like to say, is history (which, if you are interested, can be read about HERE).

With that said, I love Pokemon in general but seem to have stronger attachments to the Pokemon from older generations. My collection, therefore, consists of mostly Generation I and II Pokemon with a sprinkling of Generation IV and the beginnings of Generation V.

Lots of rambling aside (especially if you read the other post I wrote), it's really awesome to find a place where Pokemon collectors of all stripes can come together and share and I hope to be able to contribute.

So hello to everyone from me and my purple Psychic Pokemon and hooray for all Pokemon! :)

Poizenkat's GA with Halloween Umbreon ends today at 10pm EST, which is just 8 1/2 hours away. Korth_dono's GA with a ton of Arceus stuff ends tomorrow at 10pm EST, which gives you just over 24 hours to get your final bids in. :) Well, i discovered some PokeMerch at one of ours stores when I went shopping [They rarely ever restock pokegoods =w=;;] and found two items that were of interest. I was thinking of  going to pick them up if any members were interested :3
I'll just see if anyone is interested in an Umbreon Jakks as I have confirmed that the Chikorita figure is extremely common =u=;

[And before you ask, yes I was granted sales permission on 03/17/11 by dakajojo]

[I also have stuff like cards and random figures and possibly some plush I need to get rid of, but I'll do a proper sales post for those later :3]

The widely popular, Umbreon Jakks! It's in a tub set with totodile, cleffa [mispainted, her mouth is missing color], and Ho-Oh. Is anyone interested in him? :3
( Collapse )

Wow!!! It was nuts, but i got ALL OF YOUR GUYSES THINGS!!! Pics tomorrow -- but i can take payments at any time.

Please send your total with your LJ NAME IN THE SUBJECT and what you got in the note. PLEASE do these simple things!!

Send to denkimouse (at) gmail.com!

Huge Karoia GA ends in LESS THAN 4 HOURS!! Tons of items still bidless and many more at low prices! Get those bids in! Click on the picture to go!

And then a question. Is anyone selling one of these?

Sales include some leftover items from my last sales post with reduced prices as well as 10 of the PokeCenter Shopper Clear Files.

So, I've finally decided on a few certain Pokemon I want to concentrate on collecting now (well, still quite a few sides but I have two-three main collections at this time, and I'm basically gathering small pockets of items I like~) and so I've decided to weed out pretty much everything that doesn't fall into the correct categories. :'D Like a lot of people at the moment I just have too much stuff and no space and I know it'll be appreciated elsewhere, plus I could really do with the money. ;; Especially with Gen V stuff popping up... I feel more inclined to collect from there now too.

Anyways! So, I have decided to formulate two lots out of the stuff in my sales and stuff I've weeded from my personal collection. :) I don't really know what I'm looking for for them... so basically offer and I'll see what I like~ Alternatively I totally don't mind if anyone wants to GA the stuff. I have plenty of extra pictures to show for that. :) And I need to stop saying 'stuff'.

And secondly I decided to take photos of my current collections, aka what I'm keeping, since it's about time I did that too and my camera was out so~ :D Even with all the weeding my collection has grown *a lot* so thank you so much guys! <3 Special thanks to all of those who sold to and traded with me. ^^

YAYAYAY. Omg I'm so stoked. I just got this e-mail.

Congratulations! You were selected as a Second Prize Winner in the PayPal Advantage "Send Money" Sweepstakes. The prize is a 2GB Apple iPod Shuffle and it will be shipped by UPS to the address registered to your PayPal account. Please expect delivery within 2-4 weeks.

I NEVER win anything so this was a big surprise haha. I got confirmation that this e-mail is real so YAY. AND IT'S ALL THANKS TO YOU. For like a month, any money you send is a ticket in the contest. I only sent money to you guys for my wonderful Pokemon collection. A few were from Ebay, but some were group auctions for this comm too! SO THANK YOOOUUUUUUU. I could have been happy 10 1st prize ipad winner or the grand prize of the macbook, BUT SECOND PLACE IS GOOD TOO. As the saying goes, beggars can't be choosers haha. I'm hoping to trade this iPod for some dericious pogeyman stuff! WHEE.

OK AND I GOT A FEW COLLECTION UPDATES TOO <3
( Collapse ) Auctions end on the 4th and many of them don't even have their starting bids!


And happy April's fool day. Hope you aren't getting pranked too much by those rowdy hooligans!

( Collapse )
BIDDING HAS BEEN ENDED.
I will comment on your bid about your total in a few days. Just waiting for the shipping supplies to arrive.
Entei TOMY MC+ figure - Start at $30 So today I have loooooots to put in this post! I have brand-new gets, Reshiram & Zekrom Styluses for sale A BRAND NEW water bottle from Toys R Us that I haven't seen posted yet! Annnnnd I still have Two Banpresto Snivy's for sale also! and Talking Jakks Pikachu and Buneary for auction! They have no bids, so go ahead and get yours in!
Pleeeeeeease help me raise the little money I need to buy one of my mini-grails! One sale should be good enough!

I did it! It took me little over a year. My first generation Tomy figure collection is complete!!

And I have a question about these two Tomy Ditto:

I know the one on the left is legit. But how about the right one? It looks exactly the same except for the color. It is a little darker. What do you guys think?

And last but not least. I'm thinking about selling my two 1/1 play-by-play plushies.

Would there be any interest? Keep in mind shipping from the Netherlands is very high..

And!! I almost forgot, but I've been working on my website. It is not done yet, but there are individual pictures of all my Tomy's!
http://knienke.weebly.com/
(No banner because I don't know how to make one ^_^")

I've just come to post pictures of all my new stuff! Thanks to everybody who mailed them out! I hope my positive feedback made your day. 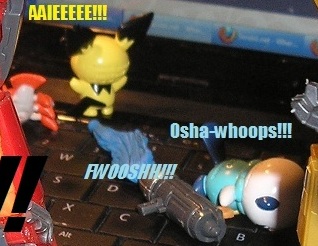 Thank you. And Merry Christmas.

okay so I'm kinda poor right this second but I found something on Y!J I wanna GA maybe. But I am trying to figure some things out... if you know anything about the product in this picture or are interested in co-hosting check under the cut

Also, we won this GA:

Just to let you guys know! I'll comment you all when I get the invoice!

And this poster... do you want it?

I own this poster and don't really want it anymore cause it's so HUGE. But I got a box from the post office it'll fit in and they told me it'd be at least $14 to ship!!! (I got a poster box so I can roll it up in it, like a tube, but it's expensive because it's long and Canadian shipping) So I don't want to try to sell it because it'd be so expensive to ship :C But would someone be interested in trading for it? Maybe you got something you are willing to trade for it?

and that's all from me for right now! I have received tons of items in the mail, but I'm too lazy to post right now. omg lazinesssssssss it overpowers me soooooo. I'll take pictures of all my goodies next week sometime to share with you all.

until next time, keep on collecting everyone~

First thing, everyone who brought something from me last week (apart from

forest_snivy) your stuff has been shipped!

And so this post isn't the most boring thing ever, take a look at this WIP pic of my Pokemon Trainer OC Pink (see the banner) plush by the amazing sequinjar on Etsy!

Sales Permission granted by dakajojo on 03/02/11

More examples under the cut ~
( Collapse )

I've been looking everywhere for an umbreon kid.. I mean everywhere and luck just isn't on my side. So, I was wondering if anyone had an extra or unwanted umbreon kid figure that they would like to sell. (If this is your image and you don't want it up here, please let me know!)

Thanks in advance!
while cleaning my room (in order to accomadate the many things i collect ^^; ) i found...

You all saw these cool N, team plasma and Zoroark card sleeves yes? Well I missed out and would love to buy singles for the pretty art ;_;

Also would possibly be interested in any other sleeves with awesome art :3

Thank you very much to everyone who contributed to my dream TCG pokedex!! Everything I need is now on its way to me. <3

I was thinking about starting a little Breloom collection, guys! So I was just wondering if anyone had nicely priced Breloom figures, charms, and etc. they could part with. Or know where I can get some! And I'm on a budget so nothing big please ^^.

And I'll be coming to you with another plushie collection update soon! I've got a lot coming in the mail @_@

OH! And does anyone know how much this guy would be worth?:

It's a jumbo Latios plush, 17'. he's a bootie but simply too amazing.  I really adore him but I'm thinking of selling him once I get sales permission, or trading him for a custom/plush of equal value. Here are some other shots:
( Collapse )

So here we go on a brand new sales post! Yaay for my first time! DX

No special banner yet, in the works. Follow the link to my store ^^
safir-hime.livejournal.com/976.html

Next some awesome gets and a small collection update.

I haven't made a snazzy banner yet, and I prolly never will ): someone want to? ;D so, click da link

New card sleeves! I found these on Bulbagarden of all places. I don't believe I've seen them posted here yet..