I am opening felt friend commissions for the summer. Please check out examples of charms I have previously made such as Eevee and Poliwhirl! I can probably make any Pokemon character you want as a charm. : >

Click on the picture or go here for my commission page: http://roxyryoko.livejournal.com/19221.html

Look at my new gets today!! I got the Pikachu shirt from Delias <3 Playin wiff his wittle toes :D
And look at that Oshawott. I couldn't resist! I hated almost all of the 5th generation Pokemon when they were intoduced. Now I love more than half of them. I blame this community :) Hot Topic got some new Pokemon merch as well! Go check out their site :)

Selling this adorable guy. It's gonna be tough but he'll go to a good home Please send payment immediately to karurah (at) gmail.com with your username somewhere in the note & update the spreadsheet saying you've paid, along with your country/zip code! :) This is an eBay auction, after all, and I cannot cover anyone!
Mewtwo, Pikachu, and Parasect were all bidless. They will be $7 to claim, and are available to GA participants only for the first 24 hours everyone!!

Anyway, for a small wants... I'm looking for the old Hasbro Charizard plush beanie for a friend.
I was showing him the comm the other night and he saw a picture of it in someone's collection post. Anyway, he and his brother collected most of them as kids, save for the ever-elusive 'zard.
I know this plush isn't super rare, so please help me help him! ^-^

We still need more bids to make this a success! More than half of the pan stickers don't have bids! Click the image to go to the post! :)

first off, and most importantly, i was given sales permision by

I have Plushes, Some kids and an awesome Pokemon Monopoly for auction. YAY! go check it out!

Alrighty! :D I will be going to Epcot soon with

Also! Some stuff is now up for offers, including my Eevee Canvas! :3

Eevee is in like new condition, with tush tag only! I will be trading her away if I don't get an offer I like! :D Thankies guys!

ALSO. Question.
Is there anyone on here who does runs to the Pokemon Centers that can pick up some of the weirder stuff for me? (Like keychains, charms, pins, FOODDDDDD (I need me some omnoms!), pens, pencils, notebooks, bags, shirts, etc.) If you could I would REALLY appreciate it.<3 :D

And one last thing- How much are Minun canvases worth? :o and how rare are they? :o
lol.thanks!

Hey guys, I've got a lot of cards that just have to get out of my house! ASAP!

Please check them out here under the cut~

I would also like to add that I'm looking for some Smeargles, from HGSS-on. I would like to get these for $2 each if I could, and 5 would be ideal.

For those of you who like my Loonakit plushes, there's an (old) announcement over on my lj that might interest you. :) Check it out: http://bladespark.livejournal.com/1243966.html

In related news, fans of my plush/custom plush in general should probably add my lj to their friends list, I always post there first.

Espeon Friends Plush. It is in super condition except it doesn't have a hang tag. I am not sure if these were sold with a hang tag, but regardless, it doesn't have one. It does have it's tush tag!
Offers starts at $5 and WILL END TOMORROW at 2:30PM PST. I finally got sales permission! I'm so excited here is my first sales post for this community and it has...

Also is anyone going to FANIME? I'd love to meet up with people there :D
Hey! I just joined about a week ago, and I haven't formally introduced myself yet. I got into collecting Canvas Plushes about 2 months ago, and I've been steadily adding to my collection. Right now, I'm happy to say that I've accumulated more than half of the plushes already, including all of the elusive Eeveelution plushes =). After finding out about this group, I got really excited about the prospects of meeting more people who share my interest. Also, I'm hoping to eventually find some rare Canvas plushes here (fingers crossed). I just had a few questions I was hoping some veterans here could answer. Thanks in advance!

1) What makes some of the Canvas plushes so rare? I've been reading some info lately, and I realized that Plusle and Minun Canvas plushes are super rare. How come? I didn't think they were so popular.

2) Are there going to be future Canvas plushes? I know that they released 2 sets in 2010, but so far no sets in 2011. I was really hoping to see Charmander/Squirtle/Bulbasaur Canvas plushes =)

3) The Canvas plushes that I still need are: 2006 Eevee, Cyndaquil, Totodile, Aipom, Plusle, Minun, Turtwig, Chimchar, Piplup, Starly, Pachirisu, Buizel, and Drifloon. Out of all these plushes, I know that 2006 Eevee, Aipom, Plusle, Minun, the 3 starters, Pachirisu, and Drifloon are all relatively rare. Does anyone know which ones are the rarest and approximately how much they'll cost? And of course, if anyone has any of the plushes that I need, name your price and I'll see if I can afford it (must be mint with tags, please).

Anyways, sorry for the long questions, but if you guys could help out a noob plush collector, I'd really appreciate it! Thanks, and I'm glad to be a part of the community!

Well I've been thinking about giving this evee up for a while now. I got him at six flags like nine years ago haha. I did have a togepi plushie but i traded it in for the evee and I wasn't sure of it's value. So anyone know a price for it? Also either willing to accept money orders or trades for him, after I get accepted to sell of course. I also have the ivysaur and snorlax plushie for trade too. the only thing about the evee is that he has a small hole where the tail meets on the hind.

For trades I'm mainly looking for plushies for him.

so my mysterious box of tomys came in the mail today and i know a lot of you had a few questions regarding the rarity and pokemon included in the metallic version.

well to provide a bit of info to the ever expanding world of collecting i'll post some pics and info! (in case somebody stumbles upon this with google) The Clipping Figure! Plz to be selling it to me <3

(I seriously had no idea it existed until I saw it in a sales post but it was already gone ;w;)

I have revamped the posts  I have made for trading cards and included more images. Please take a look! I am not that picky about what I get in return if I don't have the card.
http://pkmncollectors.livejournal.com/9131988.html

I am again,still looking desperately for the holo reshiram from the b/w set though.

Here is a preview of what I have: I am afraid to by from ebay because of the booties. :<  So here's a quick wants post! Anyone looking to part ways with any of the squirrelies below?(Images from ebay and Poke!Plush!Project) 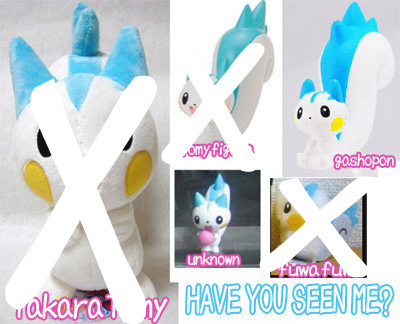 - I am looking for great condition items, however I might consider it if it's less than great too if the price is good. :O
- I'll take a look at some other Pachis if you have some for sale, but I am not looking much else at the moment (or for flats. xD;;) Hello my poke-peeps! I haven't been here awhile but I've accumulated quite a bit of stuff to make a new update. Plus....GRAIL GETS! I've been lurking and noticed A LOT of new faces join the community, so I'm guessing a re-introduction is in order.

Hey, my name is Tara. I'm 22 and live in Burbank, California. I currently work at the Disney animation studio as a storyboard revisionist for show development. I love to draw, paint and create fun plush work. I own two twin sugar glider boys and an albino malteese named Moki. I've been collecting pokemon since the beginning blah blah blah we all heard it blah blah. I've been a part of this wonderful community for 2 years, its really been that long?! Wow. I adore everyone I've met over the years while being a member  and I'm looking forward to seeing new members collections and talk shop about pokemon collecting! During my time here my collecting has ranged, at first I collected everything of my favorites buuuuuuuuut being so in love with pokemon I had WAAAY to many favs to control, that my room was getting smaller and smaller, trying to collect every pokedoll didn't help either. After cleaning what I did and didn't need I started again but in time my collecting became contained and I chose only a selected few to collect.

I love collecting members of my poke-team! Which I give names/genders and personalities to, yes I know I'm sad. Shush. They include Raichu, Lugia and Absol. And lines for Crobat, Luxray, Floatzel, Weavile, Sentret. But who I hardcore collect most and what I'm probably best known here for collecting are....the Slakoth and Breloom lines! Which I'll be showing you today!