I'm looking for all of the Goth gal cards, they are a gift for a friend, so in good shape only. I only need 1 of each. Language is unimportant. I'm good!

I'm off to bed now, please let me know which you have and how much! Thanks :)

Is there a kid out yet for the final evo: Gothitelle? I have the other 2 already. I have the charms also. If there it any other merchandise, let me know and I will consider it. ♥

(no plush, her cat will eat those!)

My name is Nicole, I'm new to LiveJournal so please excuse me if I seem a bit ignorant to how all of this works. As stated in bio, my main reason for joining is to keep up with the Pokemon collectors LiveJournal page, because I myself am a modest collector. So I have a feeling this page is going to be geared towards Pokemon topics, especially collectors merch. I personally collect mainly large plushies from the first #1-151 and also love anything Dragonite related. If you have the same interests, don't hesitate to friend me! I'm trying to learn my way around this site so any friendly help would be greatly appreciated!

As I stated earlier, I am a modest collector. I can't boast about how large my collection is, and unfortunately is used to be much larger, but many of my cards and figurines have long since been sold to other collectors. Fortunately though by narrowing down my focus, I've been able to invest in some great piece that I truly cherish. Here's a picture of what i have to date. I have a 13" Psyduck on the way as well, so I will update the picture when that comes in. Again, please excuse my ignorance if I don't understand all the etiquette of LiveJournal. I'm still trying to figure out all the rules to GA's! Any guidance would be greatly appreciated and I look forward to seeing everyone's awesome collections.

Hurray! The lot has arrived (and super quickly thanks to

irethsune <3 ) so it's time for payment two! The spreadsheet is located right here. Please send all payments to godudette[@]gmail.com and make sure you include your username in the memo!

Before you send payment, however, check under the cut for all of the GA extras! I spent a lot on shipping supplies for the winners, so the items are up for sale to help with the cost. =3 I have also added other items from my own collection  for sale because I would like to [minimize my sales posts this week so that i] keep my next post... as an epic collection post. ;)

GA extras are available to anyone! Participants get discounts. <3

Like I mentioned, keep an eye out for my upcoming collection post... it will be utterly charming. <3

Hey guys! I've finally decided to pick a specific pokemon to collect and it's Absol. He's just...awesome. So now...I WANT!!! I really want this the most:

I prefer Mint in package but out of it is JUST FINE! I just don't want to buy him for 50+ dollars :C HELP

And does anyone have any leads to this figure? It's the
Pokémon Advanced Generation 10cm Double Action Figure Absol which I believed to have been released in Europe.

Other wants are:
Metallic Absol Tomy (If no one bid on him on that GA of Jame's lot on eBay with the lotto figures could you please tell me! I would like him!)
The kids: Regular, Shiny, Clear, Quick Attack (attack kid), Quick Attack Clear (attack kid)
Zukan
Data Carrier Figure
BallChoco Figure
Pokedex Figure
Hasbro Silver Figure
And the Crystal and Pear Trading Figure

Please no Flats at this time :) Keychains if they're at a DECENT price! Thanks!
If you're interested in trades, here's my sales post here: http://pkmncollectors.livejournal.com/10392945.html

I know I have not posted an entry in forever and a day. I greatly apologize for this, but real life has just kept me rather busy. Well, that and funds are very tight. Despite money being tight, I have picked up some purple kitteh items here and there. I hope to do a collection update in the near future for even if it is a small one it is better then none!

Anyway, enough of my babbling and to the point of this post! Below the fabulous cut, you will find my entry for the

pkmncollectors 2011 Halloween contest. If time was on my side, I would of come-up with something more creative, but I look at it this way at least I do have an entry...:D

So, there you have it and the last pic is my entry!  I apologize for the crudely put together story, but I only have "paint" on my computer to work with and no tablet. Now it is time for me to get some cleaning done...;)

Hey guys I decided to make some Halloween Keychains. I will be selling the ones I have already made along with making some custom orders as well.

I just got sales permission and I'm trying to learn the value of some of the stuff I'd like to sell!

Besides that, I should have a collection update fairly soon once I get the rest of the pokedolls I bought in the mail. I think I'm waiting on...5 pokedolls? Sometimes its hard to keep track! But for now, I'm working on my collection blog. So far I have all my audino, drifloon and mantyke items up on the site, along with the non-pokemon super cute mamegomas I have! I'll be taking individual photos of my entire collection as well. Check it out if you're interested!

Expect a collection update from me in about a week from now! No new Arcanine or Flareon unfortunately, but some Pikachu and a whole lot of TCG! I'm very excited ^_^
But for now, I have renewed my sales post. Take a look =3

Hello everyone :)
I decided to post my collection and wants, so here it is :D


Have a wonderful day :D

Good day, community!
Life has been really rough as of late, and has torn me from the community more than I would have liked. But now that things are finally settling down again, I hope to start being much more active again. I've missed being able to read through everyone's posts each day! I'm sure that the community has expanded immensely since my last active session, and hope to make a collection update/re-intro soon. C:

Firstly, I'd like to plug in my sales. Lots of new items from my personal collections, and not much over $5! Existing items got a very significant price cut. I /really/ want this stuff out of my house and into my savings for a car or into a few more items for my main collections!

I also am looking for any unique little Raikou or Arcanine things, excluding TCG but not really flats. Just small stuff as I more than likely cannot spend more than around $8 an item at this time. I do have extensive collections of both, so if the item is rather common, I most likely already own it. C: There ARE two things I am relentlessly searching for, however:

First is this - the Raikou dogtag from the UK-only released pokemon Metal Tags. I must search this item every day, and have only seen it appear once in a lot. 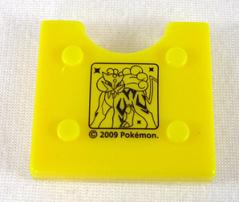 And another small item I have searched to the ends of the earth for. It's a tiny case for DS games, and this particular one was sold in packs with some starts and perhaps Celebi.

And to end my post, if anyone has heard from

gabtizzle, any information would be appreciated. I have attempted PMing them a couple time to no avail.

Thank you for reading! <3

Shipping update: To my GA participants and anyone who ordered from my last sales, I have not had the chance to get to the post office yet. I will definitely have everything out by the end of this week though :> your patience is appreciated <3

Hey guys, does anyone own one of these Unova region playsets?

Hey everyone, I've been pretty quiet on here for the past year or more so I figured it was time for a reintroduction and a collection post :)
I'm 24, female, and I live in Florida. I've been collecting now for several years although I haven't been active for a while due to annoying real life responsibilities :C But I am trying to be more active. I mainly like pokemon from the first 151 and I collect Sandshrew, Seaking, Mew, Venomoth, Jolteon, and ...Arceus, randomly.

But my MAIN collection is
SEAKIIIIIIIING

Heya everyone! I think it's time I finally do a collection post and a RE introduction! as I used to be an old member. :)

I hope you enjoyed looking through everything, down below is a generic wants post.
( Collapse )
Also, If anyone was looking to contact me, PM ME. I hope to enjoy the com like I used to!
(sorry my pics aren't the best.. gah ) : c
; A ; THIS IS WHERE I MESS UP DOING A LJ CUT
DID.. I DO IT RIGHT?!

OK, I'm typically considered an idiot for zukans (justifiably so), but I also collect TCG, and after getting somewhat bored with the Legend series (the primes and their big old faces plastered up against the "lense" just did nothing for me) I got sucked back in by the ultra-cool Hail Blizzard/Psycho Drive series. I was lucky enough to score the full arts for Kyogre, Shaymin, Kyurem and Regigigas as well as ultra-rare secret shinies Chandelure and Hydreigon, but I need the other full arts...ACK! Now, I'm way behind, and missed out on the Black/White and Red series, so I decided to turn to all of you lovely folks to see if any of you have some of my lovely card desires that you'd like to sell to me (or trade, I suppose).

If you've got some newer Japanese TCG just taking up valuable space and would like some fresh new cash, please investigate the information under the cut. Thanks for considering.

Hello!
I'm generally searching for some new prizes to burn some cash on. I'm a big plush collector, not so much figures & tiny things, however I will look at anything!

I'm looking for merch of these specific pokemon:

*Anything of these pokemon will definitely catch my eye.

I am also interested in plush of pokemon dressed up, like the musical series, or halloween, etc.!

Thanks a bunch! :D

PPS - I should mention what I'm not looking for!
Riolu / Lucario Pokedolls
Eevee, Flareon, Vaporeon, Jolteon, Espeon, Umbreon, Leafeon Pokedolls.
Other types of plush are fine, though. :)

Something awesome came in the mail today: one of my grails! Yes, grails. It doesn't make sense to have more than one, but it's hard which to choose I want as "the" grail. Lugia really wants to know what's in that huge box. The story's under the cut. :D But be warned, it's kinda long and image heavy.

So I finally got around to posting my collection! =D (even though I was supposed to be studying for an art history midterm XD)
As some of you know, I'm a big TCG collector. Second comes my Pokédoll collection.
I got something nice in the mail today, and I 'had time' so I decided to finally share with you all my collection. ^^