I'm Rebecca and I'm 23 years old. Must likely older than you all, right? Been a fan since it came out in 1998. I'm still lovin' Pokemon- just can't stop >.<  I actually joined 2 years ago in 2009 but I never actually did anything here or bought anything...til now!
I've had alot of pokemon toys 'n stuff over the years. Some have come and gone, and my whole Burger King collection even got stolen once. I of course got it back(at least most of it).

I've JUST started collecting again, with only my favorites this time. Mostly hoping to work on my Nidoran(male) collection a bit since I'm oh-so-obsessed with the little poisonous bunny. So cute <3
My other favorites include:
Cinccino
Dunsparce
Ampharos

Click under cut thing for my very small collection

Not sure how many are interested in him, but I don't collect mewtwo and I think he could go to a much more loving home than mine, cute as he is.

So here we are with an auction for him! <3 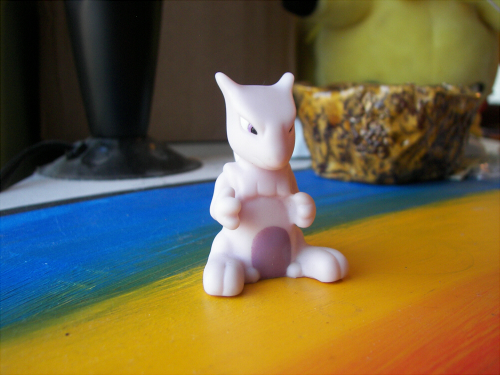 Hi everyone, today i came to sale my some pokemon stuff and some other anime stuff, as people know pokemon center just release lot of new stuff during this time, so i came and ask everyone for help, that i can earn some money to buy new stuff
Thank You ~~~

Congrats to Pokemon Center Tohoku, the new Pokemon Center in Sendai, one of the main cities in the midst of the wreckage of the region hit hardest by March's tsunami. Today is this Center's grand opening! It officially opened just under an hour ago.

Junichi Masuda, head of Game Freak, had this to say on Twitter:
"Everyone in Tohoku, thanks for all your congrats and messages!! Pokemon Center Tohoku is there together with you all. Best regards from here on in! Pokemon Centers throughout the country, let's support Tohoku!! Japan will not lose. With Pokemon Japan can become one. Let's keep going and do our best!"


People in Japan are certainly becoming one -- because I think ALL OF JAPAN is there at the new Center right now. Current wait time to get inside is 5+ hours!

In the first photo in the very very bottom left corner you can see new Tohoku Victini and Pikachu plushies. This will mean Snivy also. What will their designs be? Fans of those Pokemon, be excited!


EDIT: a new pic in which you can see some of the new plush and goods!

these children were orphaned in the tsunami. it is heartening to see smiles on their faces.

Hi guys just a reminder of the Banpresto Pre-orders I will taking until this Wednesday (US Time). I'll be going on vacation the week after so if you want something tell me fast :) I may do payment plans for a few weeks to january if needed (especially in this crazy christmas period)
Click this link to get there: http://donny9.livejournal.com/1520.html Just to end off, just a reminder for some sales I am doing - Includes kids (+ DX), zukans, metal coins and many other. You can see it in the two seprate links here: http://donny9.livejournal.com/551.html and http://pkmncollectors.livejournal.com/10869586.html . Check both out XD

In honor of everyone's favorite movie this weekend, I bring you some victory-filled sales!

I also have some not as victorious, but still awesome auctions:

Hey all! This is just a friendly reminder that my auctions will be ending at 9pm PST today.

Here's a count-down for members who are not familiar with PST: Count-down

Btw, due to lack of interest in my figures lot, I have decided to lower the amount to $165. There are lots of rare and uncommon Chou Gets, Footprint figures and other miscellaneous figures up for grabs.

Click on the image to be redirected to the original auction and sales page:

Alright, for straight sale I have to following Suicune plush:

(do ignore the candy topper figure)

This is a US vending kiosk PokeDoll, which comes mint and complete with hang tag. The tag does have a couple creases, so if you are worried about a mint tag please note that. I am looking to get $15.00, that is before shipping and fees! No, I will not sell the plush for $15.00 shipped, so please do not ask. Also, I am not open to trading at this time!

Up for auction today I have something I am very hesitant on selling:

Yes, this is the Tomy Shiny Suicune MC+ figure!

I am really wanting no less then $40.00 for the figure, before shipping/fees! Of course, I a still willing to consider the highest bid...

The Tomy MC+ figure is SOLD!!

I also have some TCG auctions coming to an end on eBay:

One card up for auction is the rare Japanese Shiny Suicune, only 1,000 were made of the card in question! The current bid is way less then what I originally paid for the card too!!

Hey member’s I’m back and I’ve got some new gets and sales for you! <3 ( Collapse )
TO SEE MY UPDATE ON MY ZIGZAGOON/LINOONES/JOIN A NEW DISNEY COLLECTING COMMUNITY I HAVE CREATED FOLLOW THIS LINK:
http://furrettails.livejournal.com/6370.html#cutid1

FOR SALES (including new Victini merchandise from the movie)(plus looking for trades for some Atsuko Nishida TCG’s):
http://orange-island.livejournal.com/911.html

It's Pokemon of the week! Let's see who this week's pokemon is:

#23, Ekans!!! Which of course includes Arbok. :) Get out your cameras and show us your snakey merch!! I'm sure there's some of you out there with sizable collections...

Hi guys! I have some small sales today.

Sales permission granted by lineaalba.- I ship from the United States. I can ship internationally.

- I only accept PAYPAL.
- Prices are all in USD. Prices do not include shipping or fees.
- Payment is expected within 24 hours of confirmation that you would like the item.
- I am not responsible for any lost or damaged packages and cannot provide a refund. I would be happy to have the package insured and/or tracked if you are worried about risk.
- I allow holds only up to 24 hours.
- I will not do transactions via PM. Please only comment here.
- I reserve the right to refuse sale for any reason.
- All items come from a pet friendly home.
- It may take 2 weeks for me to ship out your items.


I also have these eBay auctions running:

Hei guys! Yesterday I got my very first SMJ box in the mail and my very first grail! :D  And when I opened it I found these beauties! Eeee! ♥ I paced around the front door all day waiting for this! And now...It's time for some auctions! Up for auction are rare 4th movie tomys and 8th movie metal swings!

Thanks for looking!  Look for a sneasel/weavile collection update coming soon to a post near you!

Please wait until all threads are up to post.  Thank you. Ready. Set. Go.

If you are not interested in leftovers let me know and I'll get your shipping quote.

a few things on this post:) please click below to read how the AZ Meet Up went, to see a few things added to my collection(NOT vulpix! :o ), some help on displaying something old, and another old item i found digging through a box last night:) Greetings everyone got more cards for sale so check em out


Rules
1.Paypal only
2.I can ship outside the US
3.I can hold up to 3 days
Sales permission granted by Gin and lineaalba
back in 09

I'm a member of this community a little time ago, but I never introducing my little personnality !
I'm Noctie (here and on DeviantArt, I'm UmbreoNoctie). I'm a french girl and I collect... Giratina Origiiiiiiiiin >o<
I would like to introduce me with the best of my collection. I receive recently a BEAU-TI-FUL Lotto Figure... You know its...

"Hello girls and boys, would you like a French Kiss ?"

Since I'm on Pkmn Collectors, a buy a little lot of Gigi stuffs ! To

nameless5555 first, and other buyer ! It's very cool <3 I buy lugia stuff for a friend too, and mareep's familly for my boyfriend.

To see all object of my collection, click here !

I'm a Treecko collector looking to expand my threadbare shelves. If you have any Wood Gecko merchandice that you can't seem to unload or think is good for a collector just post a description, or picture, or even a link in your comment and I'll take a look. Thanks Pokemon Collectors! -Mobileboots

My auctions featuring the 10th Anniversary Squirtle Pokedoll and Charmander Pokedoll Charm ends Monday 12pm CST!
I also have a Japanese Arceus Pokedoll for sale and tons of battrios!

How much does the Prof. Oak zukan go for? It has been on my indirect wants list for quite a while. Other Oak merchandise is welcome as well.

Second, what all is out there for Team Rocket merchandise? I'm pretty sure Jessie and James got most of the love, but did any other members? Figures and plushes are my main focus.

And finally, PokeMotion is pretty cool, but I am pretty sure it is rare, how much does it go for?

Hey guys just a little under 3 hours left for this GA!

Click here or the picture to get to the GA! Hello! I was wondering if anyone would be willing to sell a Gastrodon East figure. I am looking for the one that is at least two inches in height. I believe it would be labeled a "kid" version. If anyone has one, please let me know. Thanks so much!

hi!
im again here with my wants list) my last updated list was a bit too big and too much:( so i took out what i dont need now and put in the main ones: if any body has any of these and wants to sell it or youve just seen it some where please message me (incase e-mail me: jazon4441@rambler.ru)

and heres my questions:
1. when is the next diorama contest?
2. would you like The Pokemon Company making merch for some Shiny Pokemon in the anime like Shiny Metagross, Dustox, Ditto and maybe merch for the Crystal Onyx?