{I'm new, don't shoot my if this isn't allowed, but I feel this is a must as I've never bought any plush from Ebay.com that were booties?}


Booties = Bootlegged if I am to understand this correctly. Which means the item is. . . fake? Which means that is a no no in this Community? I am sorry if I don't understand. I tried finding it in the rules, but either I am lame and couldn't see what was right in front of me or there is nothing on them. Which brings me to my next question(s) = fake = bad = what makes them fake? Does that lessen there worth and mean that we shouldn't buy them based on that? How do we know which things are booties and which are not {is this easy to spot?}


Sorry for all the questions, but as you can probably tell, online shopping isn't my foretell. I usually like shopping for things in person as you get the one on one interaction with people that you come across {though I am finding out you can receive that same interaction through online transactions as well.}

Edit: Got called away to play on the Wii. I can not reply as I will be away from the computer. I will reply as soon as I get back though. Thank you.

That I will be away for some time ( christmas and birthday )
Well I got some christmas money and looking to TOTALLY BLOW IT ON POKEMON STUFF. Because thats what we nerds do.

I'd love to know what merch Smergle has, and if anyone could show me pics etc? I'll be willing to buy anything (Excluding flats urgghhhhhhhhh ) as he's a big love of mine right now <3

Also I hope everyone has a great christmas, I plan on doing a collection post after my birthday incase I get anything O:

Also look who turned up in time for Xmas :D thanks denkimouse

beamsy shiny chu! I also finally uploaded a video of my pikachu talky
http://www.youtube.com/watch?v=o4AQgN9zfJk
( you'll need to turn it up )

I hope you guys have a great christmas, see ya all! <3

Merry Christmas! It's sunday and you know what that means! :) Today's pokemon of the day issss!

number #213, Shuckle!! Post all your pictures, collections, stories and try to show us just how many shuckles there can be! :)

in the true spirit of christmas, my mailman delivered to me a package on christmas eve i was sure had been lost after five whole days in the mail system. i know it seems impatient. but mail takes 1-2 days in japan usually... tops!

what joy of joys as the wrapping paper was torn off to reveal namco exclusive My Pokemon Collection plushies.


the winter contest has SO FEW ENTRIES! luckily it's the ~winter~ contest and will continue on into the end of january. give your entry a shot!

finally. this is news! do you remember those prototype attack-like figures from the last toy fair? a bit of an odd mixture of starters and zebstrika yes? we had no more info on them and they got a bit overshadowed by new MPC news.

well i have done my digging and my homework. i present to you the only info we have no this new line of figures...

According to the info card also with the setup, Moves Museum figures will be a brand new series, with so many figures in it that you can "build your own museum" and also register each figure online individually... hmm just like.... MPC!! No, right not there is no hint that "all" of any generation will be made into these figures.

The next information about them will come out in mid-February at the next toy show. How fun!

Until then, here is some SUPER nice closeups of the figures, and the info card with the teaser information. No word yet on size, BTW!

Thanks comrades! Have a good December 25th!

I just wanted to show you guys my two pieces of PokeMerch that I got for Christmas! xD

BootieChu Pillow Pet!  His head and tail are deformed but he's still so soft and cuddly! xD

And.....
( Collapse )
Welp, that's all my new pokemerch for now xD Here's a small end of the years sales post of my stuff that I'd like to offer to the comm before I feed them to Ebay.

I used to be really into Pokemon League in college, and would always trade everyone for their badges every season. I ended up giving quite a few away as gifts, using them in cosplay, etc., but now I decided I don't need them anymore. Sales time!

Merry Christmas~, or Happy Christmas to those who prefer that. Ahaha~
So I raked in quite a few pikachu this christmas, but in the video above is my most curious one. He's motion and light sensitive, and he doesn't have a off switch, so it's almost impossible to not make him sing without taking out his batteries. But I'm really curious about what he's singing. I know quite a few pikachu character songs, but I don't recognize it. Does anyone know? 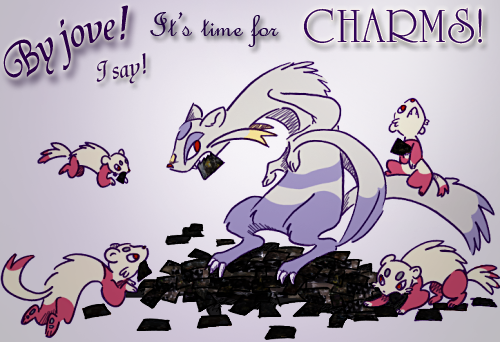 TOTALS FOR WAVE ONE!

The first wave consisted of Kanto Pokemon only. Gin managed to pick up all the slots, PLUS everything on the waitlist! You have a total under here even if I told you 'Sorry, you were too late for *Kanto Pokemon*.'


HOW TO PAY, written by Gin. PLEASE FOLLOW THE GUIDELINES!
SEND TO: denkimouse (at) gmail.com
SUBJECT OF PAYMENT: JUST your LJ name please!
PAYMENT NOTE: copy and paste your charm list from your totals here into the note.
make sure your address is included!

this is four very simple instructions that will not take more than a minute to do properly. please do them all. if you forget to comment here or put your name in the subject, you might be counted as having not paid, and will get hounded about it. there are hundreds of orders here so please help keep it organized and neat by following those very very simple rules no excuse not to follow them! thank you! and please and thank you!

I hope everyone had a lovely winter holiday!

denkimouse
-My feedback thread can be found here - Link and Link

So, I didn't get any Pokemon things for Christmas (except for confirmation on a Mew charm being picked up. Thanks, Gin!). So, I'm here with an offer...

The one thing I really wanted for Christmas was a CoroCoro Shining Mew TCG card.

I have never gotten any replies when I have offered to trade cards for it, so, this time, I'm offering plushies. ^^; My friend is supposed to go to Epcot later this month (sometime before January, I think). I am willing to trade one Pokedoll/Pokecen plush for this card. I am unsure of the current stock, but here's a recent post about it - http://pkmncollectors.livejournal.com/11002361.html#cutid1 And, when I was there in October (which might have sold out by now), I know they had Giratina, Metagross, and Zoroark. I'm unsure about what else was there.

If anyone is interested in taking me up on that offer, please let me know. I won't ask you to send the card until I have your plush. I'm looking for a mint/near mint card.

Also, though less important, I'm looking for a Houndour pokedoll.

And, if anyone bought the Pikachu line charms (or has the priorly released ones) and is willing to part with Pichu, I might be interested in purchasing it...depends on the price. /edit

My card trades/sales are still open.

My Wants: Link and Link (for cards not listed/pictured on the first site...this includes Dark Rush cards O:)

What I have for Trade/Sale: Link I also have some first edition and Shadowless English cards. The only holo out of those is a 1st Edition Base Set Clefairy.

Right now my Rare Candy and Pokemon Collector cards are on hold for someone in the community, but, if I don't hear back from them soon, they will become available again. It has been a week since I've heard from them, but I understand that most people are busy due to the Holiday season.

Cards I am especially looking for (preferably in English if card is available in English):

(I also love cards in alternate languages besides English and Japanese)

And...I hope to have my Complete Base Set TCG Collection up for auction within the next week, so keep an eye out for that. ^^

Merry Christmas, to those that celebrate. :D

Now that Christmas is happening/pretty much done for me, I have quite a sum of money which I am probably going to completely blow on Pokemon stuff. xD <3

What I am mainly looking for~
MEW:
A cellphone/gashapon strap! Looking for two, one for my phone and one for my DS. (No customs please.<3)

Feel free to link me to any merch of Mew, Plusle, and Minun too~ ^w^

And I'll end with a question, how many Pokemon do YOU collect? :o It's probably been asked several times, but I'm curious as I find myself wanting to collect a bajillion cute Pokemon.  TwT;;
For me, it's about 3 (Mew, Plusle, and Minun- though Minun is for my beloved boyfriend :3c) but I have side collections of Entei (and the legendary dogs, though Entei is my favorite), Pikachu/Pichu and others. ^-^

hey everyone. i have christmas money and of course i would rather spend it on pokemon than clothing things like that. here goes my list:


( Collapse )
if you have any items let me know. the ones that have stars next to them are big wants as minccino seems to worked its way into a bigger collection than just a side collection XD

i will also be doing a collection date probably after the new year as i have 1 custom on the way, 1 custom going to be made, and a nice big box of plush coming from someone =]

EDIT:
-i am making a minccino OC and i would LOVE a custom plush of her. probably not too small but not too big either. maybe a size inbetween the pokecen plush and the 1:1 plush would be good. she also has a big purple bow around her neck. if that could be put on too that would be great and if it was removable if not thats fine. let me know if there is anyone that would be willing to take on the task. and let me know how much you charge =]
(will add some reference shots tomorrow)
Collapse