Without wasting much time, I'd like to come to point.^^ (And sorry again for posting sales threads so frequently lately. Please let me know if I annoy you!)

I was granted sales permission by Dakajojo on 09/25/11 As for the meme, I can't think of something good... Terribly sleepy>.<  Maybe...oh yeah! If you could change one thing about the Pokemon-franchise, what would it be? I for my part, would like it if gamefreak started making like 2 versions of pokemon. One that still targets their usual audience and the other would be a little more mature and maybe a bit darker? for the older pokemon fans. We all grow up after all, and as much I enjoy the games, I think there's huge potential for a more mature take on them as well!

edit: Sales were edited with a clearer picture, Turtwig was excluded as he sold already. Thanks  guys<3

Hey guys, i just stumbled across some figures i was thinking about buying.. But i wasnt sure if they are "zukans" or the European versions (still a 1/40 or similar scale)

Bad news, im terribly sorry guys but we lost. It got BIN'd :<
Just as I went to put in a bid I noticed this, im so sorry I feel like I let you all down T__T
I just deleted the last thread to put a quick hault to all bidding and thought the news would get to you quicker this way, hope I didnt break no rules there.

So This coming Sunday I'm going to start experimenting with resin.  I have a ton of bootie cards, that I would like to turn the pics into Jewelry or Key chains or something.  And a bunch of common regular pokemon cards as well.  But only if I can get this right!  Now I have way to many bootie cards to pic from on my own so i selected a few. 17 of some interesting "shinyness" and for the art. But I dont have time to make 17 tests!  This is where my fellow pkmn collectors come in to play!

I need help deciding which pokemon cards to use! *poll*  And what shapes I should buy to do the cards in.  I can even do the whole cards if that's what you think is cool. *note:  this is for experimentation only, not for me to sell, not yet anyways and so I can determine which real cards to cut up *GASP**

Poll and picture below cut

Hi ^_^ Coming out of lurkdom to inquire about something I saw.

Does anyone know or have personal experience or better yet pictures of this? I'm interested in getting one and I'm wondering how seamless it is when assembled. I tried checking out some old entries with pikachu's tag but didn't see anything. Do point me in your direction if you posted about this and I just missed it.

EDIT: Oops, my bad! I thought this had already released. Apparently it's just about to release around April 25 XD No wonder I couldn't find any info. Man, I can't decide. I already got UDF Stitch so I don't want to add more to my purchases this month, but it's kinda cheap at 740yen so I want to try :( You know you're badly broke when you're quibbling over a few hundred yen ><;;


On a related note, I just had to share the experience. I was at a local convention and saw a Walking Pichu plush! It was absolutely one of the cutest things I have ever seen!!! You know how walking toys can sometimes be more disturbing than adorable? This one was hands down just too freaking adorable *_* My friend and I were squealing so much over it, even the guys standing around the store were exclaiming at how cute it was when they saw it walking :D I didn't get it coz I'm sorta on a permanent plush hiatus and I'm not a big fan of Pichu, but I was soooo tempted XD

I don't have a vid camera so I couldn't record it, but there are vids floating around in youtube if you wanna see him in action :D

ive been looking for him 4 ages and finally got to get my hands on the illusive dunsparce zukan!!!
here he is along with my new mamoswine kid every dunsparce collector would know how i feel about this little guy.i would like to thank shiningmew for this!!!:)

- Sorry about my shipping delays from my last sales post. I had jury duty so I could only make very small runs on the short break they gave us. ;__; Anything that did not include a tail charm should be at their destinations now (or if you are out of the country you should receive it any day now so as long as customs doesn't hold it up!). ;D I apologize again for the hold up on my end. ;_; I am usually very prompt when I ship!

- Tail charm people~! I'll be knocking them out this weekend~! :D Thanks for hanging tight bros. <3 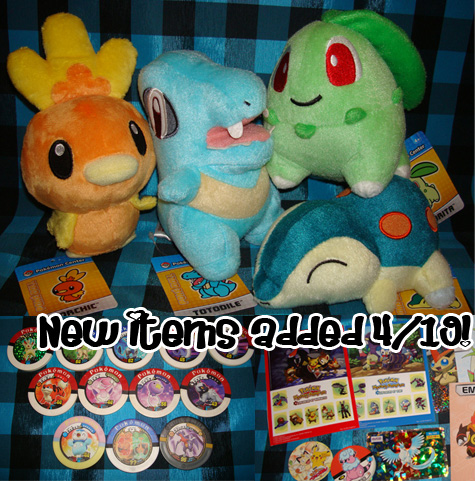 ♡ Will Ship world wide!
♡ Buyer pays all shipping costs~ Mostly everything will go out in a polymailer unless you ask otherwise. Just be aware it costs more to ship in boxes~~~
♡ If you would like to pay for insurance for your package, peep up~ ♥ They don't come with insurance otherwise~~ I am not responsible for the post office derping out on your package.
♡ I accept Paypal and Money Orders~!
♡ Holds will be a case to case basis. I don't like doing them for long periods of time.
♡ People ready to pay get priority over people asking for quotes on items.
♡ Payments in USD only
♡ All items are 2nd handunless otherwise stated~  Please keep this in mind while shopping~
♡ Feedback Thread → w3rd.
♡ I joined the community when it was first created so Sale Permission was not required when I joined. xD;;
♡ Trades? Only looking for Retsudan Stamps of Pachirisu and Phanpy!  Also Metal Phanpy charm! ♥

HEY GUYS!
So its been a while! I'm really happy that I got sales permission again a while ago!
Again, a big sorry for being such a disorganized butt before :( But after half a years break from selling I've really got myself sorted!

Im sure lots of you UKers especially are aware that after the 30th, prices are going way up for postage. So im ceasing this chance to sell everything ive ever wanted to! TONS of sales, TONS of auctions; including all of my Zukans and TFG figure, all starting at $3 each!!

Oh and on a side note, lookit what i found More photos and info under the cut!

I have picked up our GA at the PO yesterday and today I have been working hard on the shipping payments!

Please read the rules before paying me for shipping!!!


And now to the extras sales!!! Everybody is free to come, participants will have a chance to get the items for less though!

alchemillapkmn for my wonderful sales banner, who made it for me! <3333)


Thank you so much for making this a successful GA! =D

Just a small reminder for my auctions ending tomorrow April 20th at 10 PM EST.
(Click on the picture or here) Many items have no bids!

Also a link to my permanent sales post here: As you all know, I have put myself into a sales ban forr the month of april after flooding the comm with my sales post and not selling a whole lot (assuming everybody got bored of my sales, so I decided to rest them)

However, this is not the point of this post, as I was looking at my pokemon items, and one of them actually looked quite funny, so I decided to post 3 funny pics of my collection, and to invite you to do the same. It would be awesome if they were "coincidence" and not prepared for the purpose of the pic, HOWEVER, you are welcome to intentionally pose your pokemons if the picture is funny and/or cute :3

Also please feel free to dress them up, like I did with Growly Yeah, so.. I'm a little late with this post, considering it's already April 19th..

Anyways, I have commissions reopened~ Here's my lovely Shaymin forms wallet (one of my commission from last time) as an example: C'mooon. You know you want a wallet like this for yourself.
(I also do keychains to match)
Click on the link to go to my commission page: http://areica96.livejournal.com/1490.html
I realize some images on my commissions post don't seem to be working (thanks, LJ..). I'll somehow fix it eventually.. >.>
Also, expect another huuuge TCG sales post soon. I'm beginning to sort my Trainer cards this time~

MESSAGE: to everyone who purchased from my last sales your items were all shipped out on the 17th! ( Collapse )by the way is anyone else having problems receiving LJ comment notifications? :C I've noticed its like ill get some and sometimes i won't this last week :S

Hi, guys! I come to you with...yet another question (I'm really starting to feel like a noob amongst you experts, haha).

I don't think this has been posted yet? AAPF just posted this picture of the PokeCen Melotta promotion featuring both forms! Lots of pink and wallets and bags and stuff..I'll sit this one out but these items should please some members here.

By the way, I still have many Pokedolls and Pokedoll stickers left. Please check them out here: Sales

All Eeveelution postcards and Pokedolls stickers were mailed out a couple days ago. To everyone who bought Pokedolls or the Movie 14 keychain for this sales post, your package will be shipped out early next week. Thanks for understanding.

Lastly, www.pokemonblackandwhite.net is currently running another contest and you're all invited to enter! It's a quiz one. Click the link below to be transported to the contest page.

Hi everyone! First off, to everyone who ordered from my sales/auctions, all packages have been sent except for five (which will be going out tomorrow/Saturday). What I really wanted to talk about today is:

I know many of us buy and sell zukan, as well as collect them either as a series or parts of our species or type focused collections, so it can be frustrating to suddenly have a zukan show up that just doesn't fit in. There seems to be a lot of confusion over what zukan won't match your collection, though! I've noticed many members inquiring as to whether a zukan is Japanese or European, and instantly passing on opportunities when it's discovered the piece in question is European.

After some quick research, I can tell you all that there isn't any discernible difference between Japanese and European zukan up until European set 7, at which point Tomy Yujin Europe switched to a glossy plastic, as well as removed three pokemon from set 8, presumeably as cost cutting measures. I've examined and compared my own zukan from Japan to my zukan from EU sets 1, 3, and 6, and all plastics are the same, as well as all copyright information and pokemon names, as the same molds were used. Zukan Ranger lists EU sets 1-4, and I've written down sets 5-8 below the cut, copied from Tomy Yujin Europe's website - if any more EU zukan have been released or you can disprove me, please let me know!