Hey guys sorry to keep posting but I really must get rid of everything by friday so I cam have everything shipped off before the postage goes up in the UK on the 30th!
So instead of posting a link to my sales page ill just put all the items on here :)
Okay again please remember that I am open to haggling, in fact I encourge it!  <3

The picture for the June set of kids has just been revealed on AAPF blog!

As usual, I will be taking reservations for this set. Each kid is $9.50 shipped anywhere (Pikachu will be $7...), and I will take orders for up to 6 of each kid. Only the first 3 of any given kid are guaranteed, but since there are not as many kids in this set, the chances of my getting 6 of any given kid go WAY up. I am keeping the reservations on a Google Docs Spreadsheet. There is no backing out, or I will leave negative feedback. Payment will be due sometime in June when these kids are released and I get them in the mail! $9.50 is the ONLY payment. It includes everything, and is not due to be paid until the kids are in my hands! Comment on this post to reserve! Also, please note, if you reserve multiple kids but I cannot get all of them for you, you still must buy the ones I do get. For example, if "Bob" reserves kids A,B, and C, and I can only get him A and C, then Bob still must buy A and C. People have been confused on this in the past and I just want to clear up any confusion. :)

Hi all! I just updated my sales thread with more metagame tcg cards for the current format. I have some Donphan Prime's, Pokemon Collectors and other staple cards. The prices might be a little steep so feel free to make offers if you feel the price is to high. As always I am still doing pickups for pokedolls if there is any interest!
Click here for TCG Cards
Click here for Sales Thread

For anyone going to Anime Central in Chicago aka ACen this weekend, I will be in the Artist's Alley selling my amigurumi and charms! If there are leftovers I will be selling them here and in my Etsy shop. Sales permission granted by

Here is a group shot of each of the Pokémon I will be selling:

I will have all this and more! Look in the cut for more details and where you can find me.

I've been putting this off and putting this off until I suddenly looked at the date and realised there's less than a week to the UK price changes. :( Ooops. So all of my non-flats are going up for quick sale.

I'll be doing next day shipping until Friday. Anything paid for on Friday up until 4pm GMT will be shipped out that day.

I am halfway through writing up my next update. I've managed to get hold of some much wanted items. :) Including this lovely thing:

Cool gets over the past month!

Some of you may know a site called Video Game Memorabilia Museum, which features an awesome databse, news section and forums for all kinds of video game merchandise. (Seriously, go check it out if you love that kind of sutff like I do! Hehehe..)

Very recently, they posted something that really caught my eye;

"Pokemon Centers have been giving out the tote bag pictured above. One side features artwork from the upcoming movie and the side picture above contains Pokemon from all generations."

Where could I get one like that? I have never heard them giving out that bag until now. How big is it, and what is it made of? I seriously want one... o.o

Here is the source;
http://videogamemm.com/main/content/pokemon-update-42012

Hi community, I just have a small sales post today. Collection weeding for the most part. If you collect Gible line or Drillbur line, you might find something here for you!

I'd also like to auction off this Year of the Dragon clearfile. I do not think they are sold in the pokecen anymore, so here's your chance to take a shot at one! It is minty fresh, I have not taken it out of packaging. You can clearly see the packaging in my second picture because it's so glossy. If you're interested in that, check below!
( Collapse )

* It's worth mentioning here that both the Dragon Cleafile Auction and Umbreon Jakks Figure Offers will end on Friday, April 27 at 5PM PST/ *

Heya guys,
I've been around here for a couple of weeks, though I never really posted an intro post ... I kinda went into a 'ohmigosh will I ever find a canvas Vaporeon plushie' launch, so, um, let me backtrack a few steps ... hi there!! xD

Anyways, I've been kinda putting off posting up my intro post, only because taking pictures of my ... nice and little ... collection was rather time consuming ... uh, because I'm lazy, not because I'm actually lying and my collection is worryingly big considering I only started collecting late last year ... hehe ... what would give you the idea I was lying? I'm not acting suspcious ...

Just wanted to share some small new stuff I got this week, of course most of them related to Snivy of course XD

Hi hi community. I was wondering what pokedolls do they have on stock at Epcot? I live in Orlando, and I'm going to Epcot soon, and I would like to know the exact pokedolls they have, as I've heard that they've changed the stock and all that. And just to make this post not boring, come look at my crappy charms of latias and latios XD.

I've got a question:

A week or two ago, I bought the 2011 Growlithe charm over the 2009 one, since it was cheaper, and, by looking at the pictures, they both looked the same to me. However, the pictures were not the best, and I did not really take a good look at them, anyways.

So, I was wondering, what are the differences between Growlithe's 2009 charm and its 2011 charm?

Any pictures would help, too! Thanks!
---
Also, here is a link to my sales. There is some pretty good stuff, including Eeveelution merchandise, so be sure to check it out!
http://pkmncollectors.livejournal.com/12012565.html#cutid1

I am back with some Tokyo Pokecen sales :D
(please forgive the quick and crappy preview picture!)
Is there a specific permission required to do so (on top of sales permission)? :O Got permission! Thanks 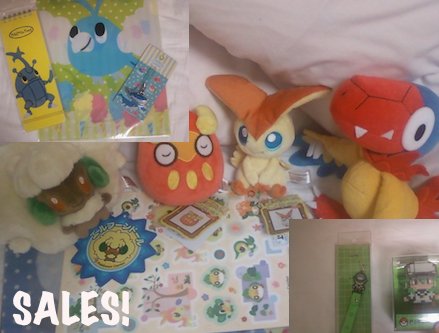 edit RE: Pickups!
As agreed with Gin, I am available for pickups of stuff that is not carried by Sunyshore - feel free to check out my Pickup Post for pictures of the current Pokecen stock!

I will take 10 slots this time around. (i.e. 10 people, multiple items each are obviously okay.)
Details about what I can/can't get you is all in the Pickup Post rules! Thanks for looking :D
Collapse