Haven't been here in a while, hello everyone! Took a break from collecting and I'm right back! :P
[Picture under cut! :)]

Sorry if this was posted before but I was wondering whether this is legit? I want to know before I commit to buying it. :x
Also, does anyone have a Pokemon Pikachu 2 they're thinking of selling? :)

I'm tiirabird, or Tiariia if you prefer my real name. I'm from Finland, nearing 20 years of age and currently applying to Finnish Art universities to start my studies this Fall. I've been a fan of Pokémon since it became a boom here in 1998/1999, and since then I've been playing the games of every generation and collecting cards more than collecting plush or figures, generally. A lot of my stuff is from my childhood, but as you will see, joining the community made my wallet lighter and my shelves heavier :'D
I've been a semi-lurker here at the community since March 23th, and some of you might have noticed me shopping and commenting here and there ^__^ I'm looking forward to really taking part in the community, getting trading rights (four more community feedbacks to go!) and later sales permission... But for the time being, I'll just go with an introduction/collection post. A bunch of friends would be swell, too <3

Warning! A LOT OF PHOTOS!
Also, long post is loooong....

Keep on collecting and thanks for looking!

Whew, that was exhausting. Off to bed~

I am SO sorry guys.

I feel totally terrible, and I completely overslept on the auction...

I am so so so sorry. :( I think that I'm going to retire from hosting group auctions for a while. Again, I apologize deeply. :(

Hey everyone, I updated my sales with new photos, a new thread, and new merch! I addded some Zekrom/Nobunaga items, Eeveelution plush and clearfile among other things so come check it out :) I am toning down my collection to desperately try and keep it at one shelf so please come help me out! OK so the time has come, and decisions must be made. I love my dittos, and I am keeping some, but a good number of them must go. Little sad, but it's for a good reason. Thank you to everyone who helped me get my dittos, I really do love them but there are plenty of pokes out there to get!

Please wait for Threads before bidding, Thanks!
go for it.
P.s. if you want to see more individual pictures you can check out my journal: HERE
after the auction ill be updating it to only show what I still own.
(I'll be back in a bit to answer any questions)

Hey guys, this is my first and last reminder for my on-going auctions for Lucario, Team Rocket and Weavile zukans, a Lapras swing charm, and a Diamond/Pearl Pre-Order figure. Most are near their starting bids. Auctions end Saturday 5 May, 8PM EST. Click any of the pictures to proceed!

Thanks for reading, and have a great weekend!

Less than 5 hours left to bid on the Flareon zukan piece and gold/silver Espeon & Umbreon Chou Gets! I also added an Espeon Chupa Surprise figure to my sales. C: I don't really know how much they're going for at the moment, so feel free to haggle on this one. x') Click the pics to visit my sales/auctions! Happy bidding! Hi community :)
Today I bring you my top shelf (Which are my main collections)
And a want! so I edited this post as a cards sale

Furret plush? Does anyone have to sell? I saw the ga that got lost but the price went too high for me anyway. I am willing to pay $80 for one. Yes I understand that they are rare :(

First sales post since I moved into my new apartment! :O Check it out!

After watching the little arc in the Anime where Chikorita evolves, and then runs away after Ash was being mean to her. It makes me want to have a plushie of her. I hope someone has one, but they might be rare.

I haven't been very active on the community for the last couple of months, but I have been lurking! Life's just been very hectic, and I haven't had much time for livejournal at all. >.<

Soooo, I have a few sales here for you all to try and jump start being active again. lol

Thanks for looking you guys! Glad to have made a post. (:

I rarely ever make posts here, but I'm wanting a few things!

I'm open to either buying these items or trading. I have the following items to trade:
A very good condition bootie Leafeon Tomy plush
Palkia movie zukan (somehow I ended up with 2 of them..)
Flareon and Vaporeon 2011 charms
a Suicune charm (new/sealed)
and the Rhyhorn/Rhydon 2009(2010?) dex charms (new/sealed)

If you want to trade, and your item is worth more, I am also willing to add money to a trade.

My feedback is here: http://feedback.pkmncollectors.net/feedback/view/intervivos_2/

any items that aren't traded for will end up in a sales post sometime later!

Hello PKMNcollectors!!! Today I bring you an awesome update! Us scene kids be awesome ;o)

Hope you all enjoyed this awesome post of derpyness

I'll be going to Japan in a few days for study abroad program for 3 weeks. I'll be in Matsuyama for most of the time and then in Tokyo for like 2 and a half days. As i was thinking about my trip i wanted to ask if any of you live or have been to Japan and know the local or hot spots of pokemon shops around those cities.

I'm putting some more items from my collection up for sale to help pay for a very big grail item of mine I bought last weekend. Click the link below the photo to be transported to my sales. Thanks!

Sales permission granted by lineaalba in May 2010.
My feedback is here: http://feedback.pkmncollectors.net/feedback/view/mana_mihara/ My vaporeons, 1/1 Eevee and more for sale here: http://chikoritabazaar.livejournal.com/3929.html

Hi, guys! I come to you with...yeah, you guessed it. Another question!
So I moved to a new town not too long ago, and one of the things that I was desperately seeking out was an anime store like the one in my old town. Much to my shock, I found one at the mall! Unfortunately, I saw a lot of things in there that were bootlegs, but I saw a few that may have been legit and I was hoping you guys could help me identify which ones are okay to buy. I've already checked out the bootleg guide, but... I could barely tell the difference when they were next to each other. So I was wondering if I could get some assistance here.


This is the shelf with all of the Pokemon Plush on them.

Yaaayyy for gets~ xDDD

I also made a more organized and nicer wants list~ with pictures!!!!
I'm still working on it.... but yeah xDDD

Link to my wants~

This is just a lightning-quick, short-ish post. My inner perfectionist is flinching at this because I usually want to put more work into a post...but I dragged it away into some dark recess of my mind. XD I'm too excited to care! I just wanted to show off my newest plush, darnit! He arrived this afternoon. As soon as I heard the doorbell, I took off downstairs like a shot. I had been looking forward to receiving this plush all week! Here he is!

He's a big old glorious FLAWLESS Giratina plush! I love the way his head is tilted - it makes him look almost cocky. More instagram photos under the cut!


Finally, I also wanted to show an outfit I made for Prince Aster, my Snivy I got at the BW tours.

That's all for today! Thanks for looking through!

Just a heads up that my Articuno Zukan auction will be ending in a few hours. The bids are still low, so if you are interested now is a great time to pick up this gorgeous piece for your collection. =) The link can be found under the picture! Thank you! Take care everyone! ^.^

A couple of gets :D

Lastly, a reminder! My Sugimori Art Gallery Portfolio (8 clearfiles) is up for offers until midnight, Tuesday the 8th. :) 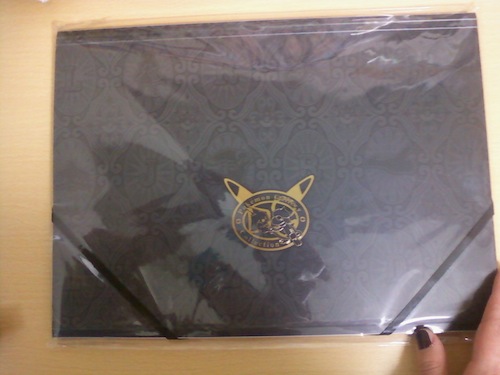 Ehhh I hate weeding things from my collection, but sometimes it just has to be done D:

I was granted sales permission by Dakajojo on 09/25/11 HEY y'all. I thought i'd throw a reminder for tha GA im co-running~
Its got less than a day left now!
Were doing pretty good, FINGERS CROSSED ;^;

Also I do always try and make my posts a bit less boring.
How crazy are you guys about collecting flats/stickers of your collection Pokemon?