Does anyone know what this is actually called? Or if anyone has it? Its from pocket monsters, and it looks like a sparkly vaporeon card .PLEASE and thank you, morgan there is a link down in the comments.

Hey everyone~
(Sorry for being inactive for a while, I'm still collecting bulbasaurs :p)

I was wondering if anyone had a Garchomp plush?
Or a gible (if they exist) plush?

Thank you in advance
I hope you are all well!

Is this even a real, official plush? I have only seen it once and I don't know if it is a bootie or what. I'd love to add it to my collection. Thankies!

EDIT: Also, very embarrassed, but I have to shoutout to whoever I won the Cyndaquil Metal Keychain from. D: I can't find the post, and I don't get e-mail notifications on my comments for some reason. ~__~ If you could please PM me, I'd greatly appreciate it, and I apologize for the delays!

Hey all! Went through and sorted a lot of the mini models. Right now I'm just posting the ones that are popular/people had inquired about. If you're interested in a particular Pokemon just ask and I'll do a quick check. They're all priced at $4 each right now to keep things simple. Check out my pretty rainbows, and combine with my current sales! :D

I also have several large lots on Ebay right now. They're not really conducive to GAs, because they're so big and I don't want to sort everything for good photos, but it's a very good price if you like mixed-bag lots. :)

Late to the bandwagon, Went out shopping today and managed to get into GameStop when it opened so i could grab some rumble figures (last time i went, when they originally came out, they were sold out). I only ended up buying 4 for now, but i know i'll be grabbing more later and... 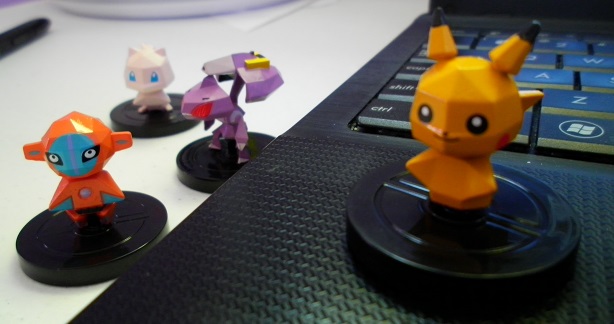 my 4th and last pull, shiny Pikachu! i feel super lucky cause nothing like this ever happens to me. xD I was hoping for shiny Genesect but any shiny is just as well ;u;
I am not sure if it will be up for offers or trades as of yet but i'll decide in a couple days, if there is any interest?
I also got Genesect, Mew, and Deoxys to go along with my japanese Mewtwo and Darkrai.
squee! i had a good morning. <3

Secondly, anyone have a regular/purple Genesect pokedoll for sale? I got my shiny one and now i want the normal one too. ;u; 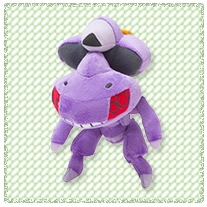 not sure how much i want to be spending, but shoot my an offer.

i have other wants over here --> click on this
mostly just want Groudon stuff and Sylveon talky but if you got anyything i want i would be interested.

AND LAST BUT NOT LEAST. i DID get a shiny genesect pokedoll yesterday, i bought it from a seller over in Japan. took a while to get him but i'm glad he made it..though i did notice he was...a bit off. I wish i had taken a picture. xD But one of his legs had been completely sewn on backwards! I was pretty confused how it managed to make it out of the factory, onto the shelves, and into the hands of my seller with a derp leg, but..fortunately it was an easy fix! I managed to unstitch it and safely sew it back on.
has anyone else had an obvious defect in any of your (official) plush? Defects in factory rejects/bootlegs make sense, but actually getting one from the store that way baffles me. xD

Update: I'm really sorry guys, but we lost the auction. We did a great job and raised $537! However competition was crazy steep. I even upped my claims to 20 each, but it wasn't enough. :( The auction was sold for $567...

Here's a link to the finished auction if you want to see: link

and here's how the last few seconds of bidding went...

Once again, sorry guys. I really wanted to win this one...

Hi guys. Just wanted to remind people that this tomy GA is ending in about a day and we're still a little under what we need to bid on the lot. There's still a few items without bids and some rare ones are still a little low considering, so don't be shy. I still think we can do this! :) Click here or the picture to see the post.

Click the link to be transported to the GA!

I also added a bunch of things to my sales!

I finally got in some of the Pan stickers from the newest set.  Only 1 of each.  For now, because of scarcity/popularity, I'm asking $5 ea for the Eeveelutions (will go down a bit next week if they don't sell).  The Pika and Meowth are $1 ea or 5 for $4 (combinable w/ the other 5 for 4 stickers in my sales).  Shipping is .50 to the USA and 1.15 international, plus PP fees, and you can have up to 20 stickers for the same shipping rate. 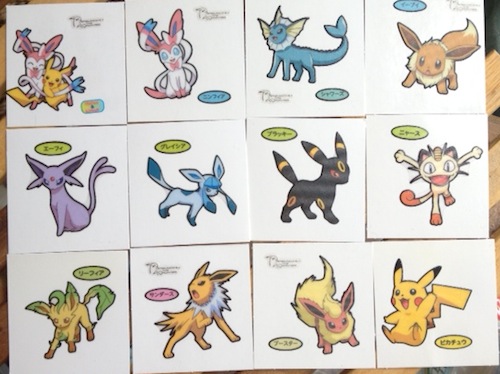 So I've gotten a few thing over the past week, and here is my update along with a couple of pics of three areas of my collection (one major, one middling, one minor).

So I assume you expect a preview, as most people do...

BUT WAIT!
WHILE I WAS FINISHING THIS UP THE MAIL CAME!


Also I have done something crazy.
I have gone back like... two years or so into the past and revived my old permanent sales thread. 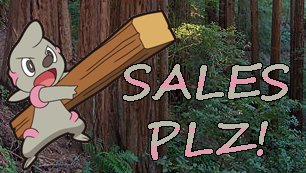 (note: my replies may be erratic today due to a few reasons (it's off-topic), but I will get to everything! I also work tomorrow and Sunday, so my replies will be nonexistant while I'm there)

Hello community. I have been part of this community for about four months but my collections has increased over four times though!
My want is this Alakazam plush. 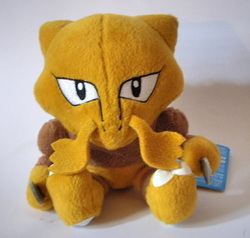 If anyone is selling or see it for sale somewhere, could you please let me know?

Also, my next question is regarding sales permission. I'm not sure if I am suppose to ask here. I have already applied for it the offical way but I was just wondering if the mods decline you or what? I just haven't heard back and it's been three weeks. I understand you mods are busy too :)

It's finally Free For All Friday time again!!

Is it just me, or do the weeks go by slower and slower as it gets closer and closer to the XY release date??

You all know the rundown by now: FFAF is a place to chat about off-topic happenings with your fellow collectors. Please do not advertise, post inappropriate images, make rude or harassing comments, or otherwise use FFAF to get around our basic community rules. Also, due to the nature of the community, please avoid discussing financial issues. Otherwise, chat about whatever you'd like :D

I have Bulbasaur, Deoxys, Celebi and Jirachi for trade - looking for White Kyurem (I don't mind straight up buying one of these), Mewtwo, Lucario and Piplup. ;u; If one person has 2 or more to trade together, that'd be perfect! And for the sake of simplicity, I'm looking for people to trade with in the UK - sorry to everyone else. ;A; I also have a clear Electivire kid I picked up at a car boot if that sweetens the deal for someone. I'm also after the Slowpoke and Slowking kid figures.

I'm ALSO looking for a shiny Eevee! I don't know if I'm allowed to link my dA on here without sales permission? But if anyone is interested in trading one for a simple custom plush, I can send them some examples! c8 (UK only rule doesn't apply to this one)

I saw an abra applause push or two for $80 on eBay and everyone had said it was not even worth close to that much.
So how much are they worth exactly?
Does anyone have one?

This sales is only open until I ship things out tomorrow as I need to have these out ASAP. Groudon plush has been HEAVILY discounted and priced to go to a good home ASAP.

Giant Pokepark Groudon - $47. I purchased this for $140+. There is one one Ebay for $128 + shipping. Please give him a new home! He is big and heavy so please ask for shipping. Hang tag is attached but one crease
( Collapse )

Hello community! I have been a part of the community for around two months now, and I have had so much fun. Lots of stuff has been mailed my way so I thought I would share a bit. Click the link to read on.

Just an FYI to those looking to add to your zukan collections. I am selling mine. I came close to selling the whole thing on eBay a couple times, but to no avail (don't get me started on how easy it is for people to back out of winning bids on that site!). I doubt anyone wants to buy the whoile thing, and I don't have the time or energy to sell the collection piece-by-piece, so I am offering my collection to the community in five different lots of 35 zukans each. I tried to break the lots up more-or-less evenly, based on the seeming popularity and value of the zukans. Some of the zukans offered among the lots are the two legendary birds, Ho-oh and Lugia (offered originally only via lottery and still in their original box), ninetales (in original bag), and gyarados (in original bag). The lot lists and some photos of the zukans can be found in my journal, here: http://greytotoro.livejournal.com/762.html Sales permission on sales page.

Hi community! I just have a question for you guys. I was scrolling through ebay and I found something and I don't know if it is real or not. So I was hoping you guys could help me.
( Collapse )
Thanks for your help!

Hi folks! Long time no post. Today I'm bringing you guys some sales and auctions of some very rare items including shiny Pokes, Pearly/Clear TFG, and some RSE & DP Zukan. The auction start prices are very cheap with respect to rarity. Come check it out! 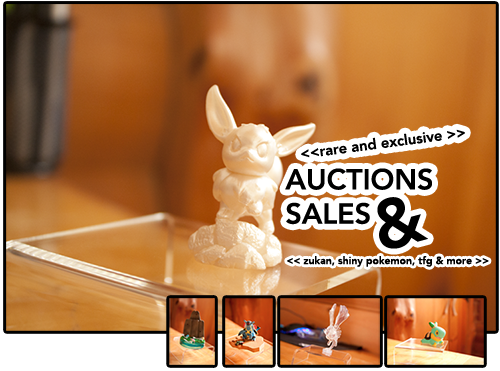 here are some of the goodies with a very cool random pokemon selection! this might be our last promotion before XY. enjoy!

more pics on the site!

Since there was such a huge interest in Jigglypuff, I thought it might be a little fairer to auction her off instead of a straight sale. So there she is! But before we start let's take care of the formal stuff.

- I was granted sales permission by Dakajojo on 09/25/11
- I ship internationally, shipping will be 5 for regular shipping and 9$ for shipping with tracking :)
- Payment only via paypal
- Starting price is 40$, BIN 100$. BIN becomes unavaible once the first bid was placed. Only bids in increments of 1$ and up please.^^"
- She's mint with both tush and hang-tag but the hang-tag is detached. 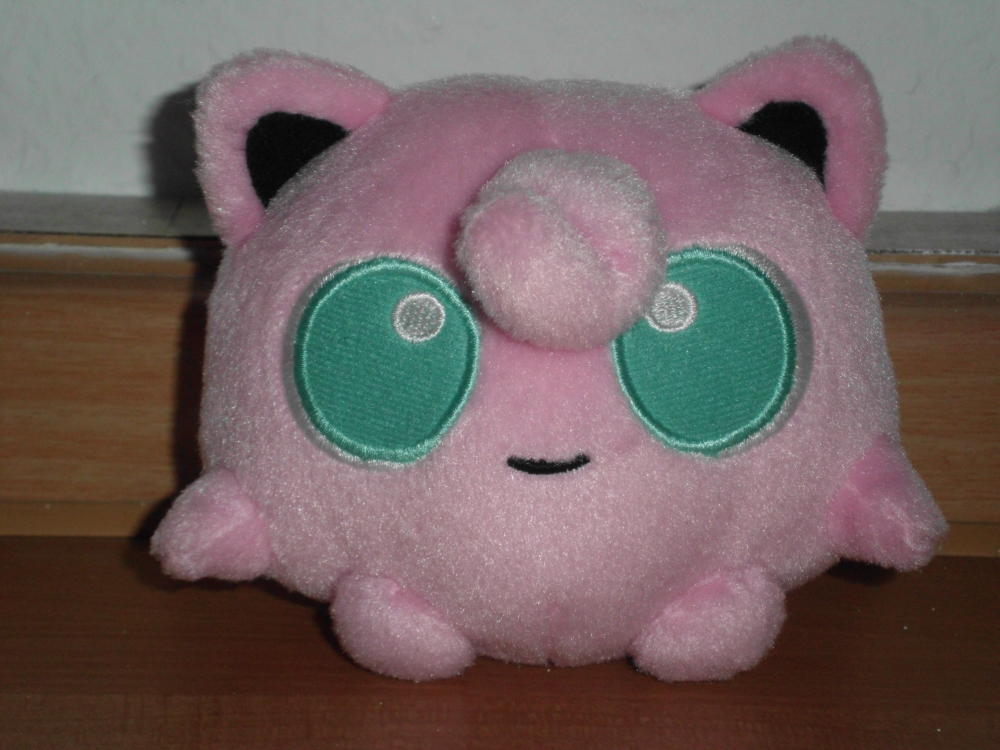 With all said and done, have a nice weekend everyone! Only one more month till X/Y :D

Hi there!
Are Rumble U figures sold in Australia and if not are they going to be? I want one but I'm trying not to buy too much stuff online :(
Thanks!
Collapse