I have got to weed my collection... there are lots of plush, a few pokedolls, some custom sculptures and one of a kind handmade plushies!
Click the picture to see :)

Hey guys! Gosh I haven't posted in a while! I've just been so busy, but that doesn't mean I don't check here daily! I've updated my sales a bit and changed a few prices on certain things! :3 Click the link below the derpy banner and take a look!

I will -probably- update this sales post with a few more plush later on in the week, but for now here's what I've put up!
Thanks for stopping by! :D

I don't know where to start x)

Well, maybe with a flashback.
In a previous post I told you that I was worried about a package sent on December 4th (so during Christmas rush) and still not received after almost a month. It had been sent by Air Mail which usually takes less than two weeks to arrive. So I had few hope :/
But a few weeks ago, I received a Noppin notification. First, I was like "What can it be ? None of my items in storage space is coming to the end". And then I realised it could be my package. OMG! I was so happy to see that it was not lost (and when you'll see what it contained, you'll understand why I was so sad thinking it was lost).
So after some hesitation, I chose Air Mail once again and my package finally arrived in a week lol
Thanks again to those who told me to keep hope o/


Before the gets, let's see my new Shiny Pokémon in game ^^ 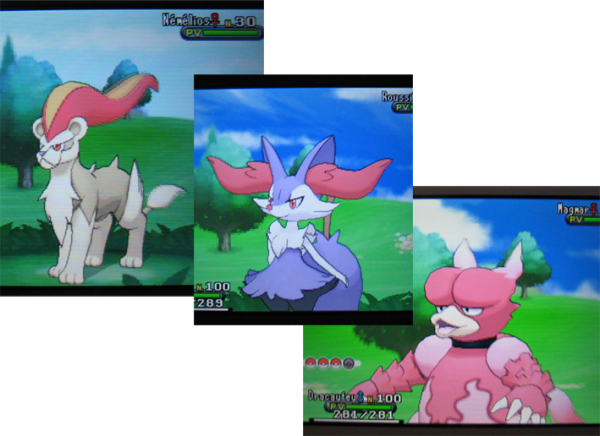 Female Pyroar. I wanted a male to call him Gryffindor but with only 25% it was more complicated. So I present you Amazone ^^
Then we have Merlin who will evolve in Delphox. Not really original but it fits him well. (I really love Braixen with these colors <3)
And finally a female Magmar (who are rarer) nicknamed Etna. She will evolve because of Magmortar's lips xD


Thank you for reading :3
I hope there are not too many mistakes because I was falling asleep xD 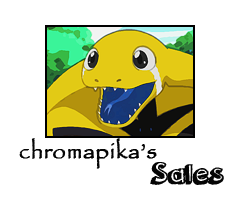 Hey everyone! I haven't posted here in a while, due to Finals and College items I needed to take care of.

Anyhoo, I got some recent plushes in the mail from FromJapan. I also have received some new plushes since my last post, so I'm going to throw in an update on that.

Also, some other news- I'm going to New York City in March, and I'll be staying less than a block away from Nintendo World! I still find it a bit mind-boggling that I would have traveled to three Pokemon-esque locations in less than a year (The Pokemon Centers in Tokyo and Yokohama, and now, this).

Also, I would buy items from people here, but the swiftness of purchasing and such is a bit intimidating to me @__@

Just a reminder that the Pokemon white 2 game with Sinnoh starters code box art is due to end tomorrow
Its still at its starting bid
Here's the link: http://pkmncollectors.livejournal.com/16510267.html

so with my first auction being successful, I thought I'd try selling a couple of things- a copy of Trozei, and some older Jakks figures.

I have bubblemailers coming to work, but they won't be here until tomorrow- so an accurate quote won't be available until then. just keep in mind that these items are all small and light, so it won't be so bad. <3

I only ship within the USA still, and I was granted permission on 1/18/14 by entirelycliched~

Was a little worried one box wouldn't arrive as its status hadn't been updated and just said it was in customs, but it got here nice and safe with my other package. On to the most important part, pictures!

So here is the first edition to my small collection! I like Glaceon so I decided to get the I Love Eevee Super DX plush! It's super soft and just all kinds of adorable... and now I want all the other eeveelutions lol. Undecided on my next one though.

I am wondering if anyone here has a spare of:
-Machop zukan base
-Abra zukan base

Please let me know.
Thanks for reading! :D

I could do with a pokemon or mlp one.

BUT I NEED THIS CASE TO ACTUALLY FIT A IPHONE 5C PHONE, the 5C is made  with plastic and the 5S is glass and i dont have the 5S.

If anyone has a pokemon or mlp case please let me know, im not really interested in the ones on ebay right now. I haven't really found alot on etsy that i like.

I really want to clear some stuff out, so there are some figures, cards, and a talking Keldeo plush below the cut!

I got my big Fennekin plush (Tomy one) at Toys R Us around near the day that XY got released. I love it, it's the starter that I picked in the game. But I also really like Chespin, almost to the point that I couldn't decide what starter to pick. So of course I want to get the big one of him too. But it's been months and I haven't seen him anyplace. I would check Toys R Us occasionally, but they don't have it. Only the Fennekin.
Does anyone know about this?

I wanted to ask about it here, but looking on ebay out of curiosity, I notice something: There's the big Pokémon center Chespin from Japan, I like it, seems the same size, even though it's pretty pricey... but on ebay I notice there's one of the same one, but with an American tag. That might not be as expensive.

I'm wondering, is that Chespin released in America? Is that really happening? Also, if that's true, is anyone having pickups for it or something? And how much? Cause I'd really like to get one.

hey guys I have come to a terrible decision. To make room for all the lovely new X and Y merch i am selling some plush. First I am selling my pokedolls of umbreon and espeon

Though it is not fully complete here is my collection of vaporeons and one absol :) thank you to everyone whom has helped me! ESPECIALLY ballerbandgeek and

Thank you for looking!!!!!
I am so excited that the vaporeon canvas came in today! It is SUPER SOFT

hi everyone! long time no post! I have quite a lot of new gets that I've gotten over the past year or so (including a really awesome grail!) but today I'm posting a very tiny update. I recently started a new collection, and there's a little story behind it...(pictures under the cut!)

ALSO, after an extensive period of being closed down, Teravolt Shop is back open for business!! (sales permission granted by

click the banner or here to be transported directly to all the pokemon goods!

there isn't very much available right now (mostly X/Y merch I accumulated during my recent visit to japan), but I will be adding plenty more merchandise over the next few weeks, so make sure to keep checking back! (note: if you were previously registered to my store, you can still log in! only the layout has changed.)

EDIT: if anyone had trouble checking out, it should be working fine now!

1) Shiny Suicune pokedoll, no hang tag is preferred
Willing to trade my Shiny Raikou (hang tag detached) with $$ for a 'Cune :)

Thanks guys <3 If you have any of these shoot me a comment <3 :) Thankssss

Hi guys :) I come to you today looking for a Super DX Jolteon Plush from the I <3 Eevee line! Shipping would be to Ireland. I can't part with much right now, but hopefully we can come to a deal :) MWT hang tag and tush tag only please. I'd also be willing to trade/part trade for anything in my sales post here 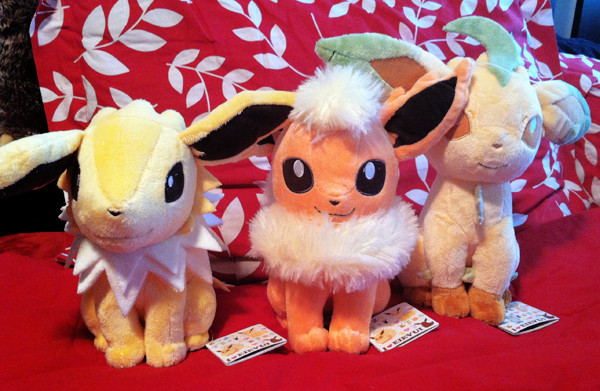 slothyshroom but it was the only one I could find where I was sure it was the right plush D: I already have Leafeon and Glaceon so the side by side nailed it :D
Collapse