Items will be shipped same day as payment.
If you buy the plush, shirt or figure you can have the strap or TR blocks for free. Just pick one (while supplies last) Haggling is welcome!
Thanks so much!

I was wondering if when you order several items from several different sellers on FromJapan if they combine all of your items into one box and ship them together for the same fee, seeing as I don't want to pay hilarious amounts of money for several international shipping fees for different items. I know they probably do combine them all into one box and ship them to you all at once after they reach the warehouse or whatever, but I wanted to make sure before I made an account.

Another thing, if I hypothetically bought 20-30 TOMY figures from one seller, how much money would you think that would cost me for international EMS shipping (I heard it gets tracking and insurance). Additionally, how many kilograms do you think that one standard size TOMY figure weighs?

I still havent been able to find a cloyster or a muk ;(

I have a few figures I need to replace too, so any help would be appreciated :)

Finally got time to update my sales after months!
Added /loads/ of new items, including mini Parco dices, random Eeveelution goods and many other weird stuff @v@/ 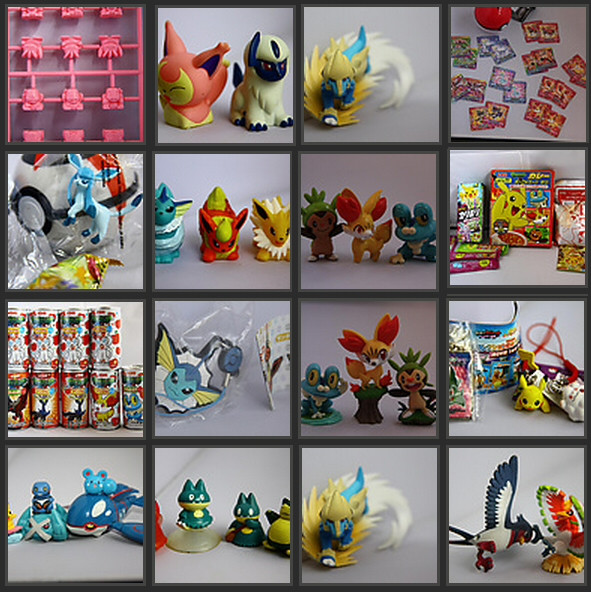 I ship from Hong Kong, so the shipping cost+fees usually starts at around $2.5-3 for small purchases! (There has been a fee increase around the post office and paypal >w>) I can't ship too speedy because the post office is almost always closed when I'm off from work, but then I will always try to ship items within 1-2 weeks >w<
Also please allow around 2-3 weeks' time for the items to reach your place if you aren't living in somewhere near Asia @v@\

Below are flat sales! No international people, sorry.
( Collapse )

If you have any questions, please ask! 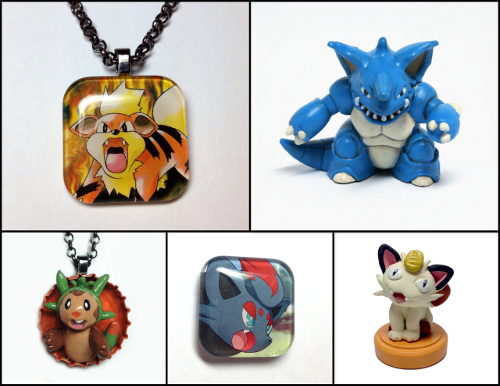 Hey everyone!  Just a quick reminder that I still have some custom items for sale at discounted prices! Click the image or this link to be transported: http://pkmncollectors.livejournal.com/17157039.html

Hey Everyone!
After a while of not existing because of grad school, the semester is finally wrapping up! This means I finally had time to update my sales!
I've decided to part with my Plusle/Minun Collection, so there's a ton of plusle/minun stuff here.

A late birthday present, but a great one nonetheless! One I didn't think I'd EVER get unless extremely lucky.

So, my beloved package finally arrived with my Pikachu Pair Plushies inside. However, I was taken aback of how SMALL they were! Before buying, I researched and every pic I found the zoom in the camera was big apparently, because they looked big, 30cm or so, specially hurt me because I paid around $100 dlls for them...and I'm not a plushie collector, yikes. (I won't be selling these, however).

Anyway, I think they are really cute. But I will post the pics here so you see the real size of them if you're interested. They are the size of a regular pokedoll or 15cm at best. Happy hunting! 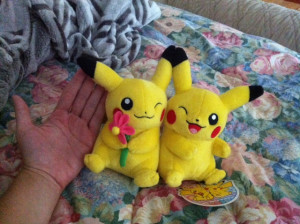 Here's something nice for all you Lapras, Butterfree, Team Rocket, Tracey, Venonat and Pikachu collectors. ;)

Hello everyone! I am a new member to this community and am excited to be part of it! Love all your plushies that I've seen; they are so cute! I only have a few myself XD but hopefully the collection will continue to grow...;)I mostly collect plushes but do have cards as well.

No new Sylveon stuff recently (except for the mini clearfile, but I want more stuff than just that to show in a Sylveon update post) but I did go to town today and got some cool stuff. :3

So Flashfire came out a day early at the store I buy my packs from. :D I was so excited I ended up missing one of my uni classes to go and get some packs, whoops. x) I used to collect the cards and haven't (yet) touched the XY series but when I saw that Charizard was getting his own set, I had to jump on it. I also decided to start playing the actual game too, so I got the Meowstic deck. :3 Shame it's not the male Meowstic which I prefer, but either is good!
( Collapse )

Hello there guys!
Today I come to you with some settei sales! I have bought a lot because it contained a Charmander, the rest was meh. Some are really nice though, so I thought you might appreciate them! This will mostly include some Gen 1 and 2 setteis of Pokemon, and the only ones I am auctioning off is a group settei + Vulpix. 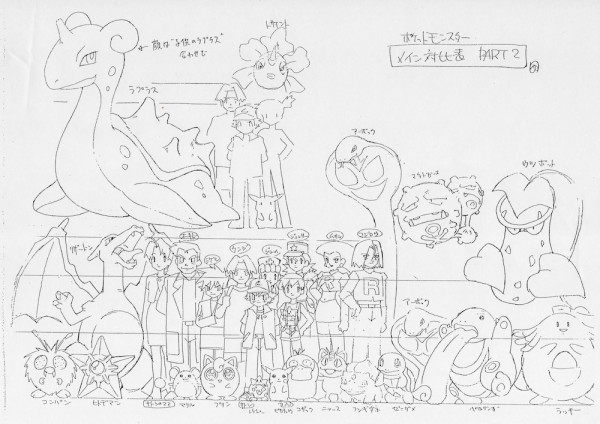 Please read the rules before you decide to buy!!!

I'm always late with these things. But here it is! My collection update!

And, why not, lets do some wants: 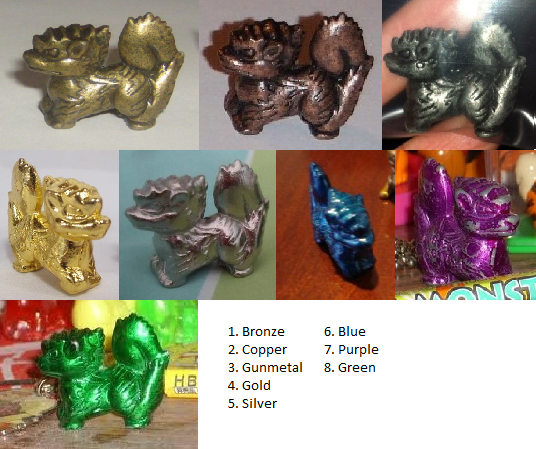 Ideally Ones That Include Any Of My Favourite Pokemon

List Under The CUTTTTT
( Collapse )
If Not Just Give Me A Little List Of What You Have Or Direct Me To Your Sales!

Again Thanks For Reading Guys ^^

I recently got a box from Japan, and you'd be surprise how the smallest of things can be the biggest of grails. 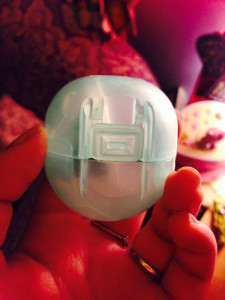 Now, what can this possibly have that has been so coveted?
( Collapse )

I still have a ton of stuff I want gone! So I have stuck nearly every figure from my sales into cheap lots and put up bunches of plush for offers. Click the picture to go to my offers page. I'm doing offers as opposed to auction because: sniping...

Someone's gonna hate me for making this kind of post again. But I just received six random xy packs and two xy dragonite/salamence promo blisters from a pack lot sale by

pikachux. And ... HERE IT HAPPENS! FULL ART BLASTOISE AND BOTH MEGAS IN JUST EIGHT PACKS! (sad truth is nothing fancy even no holo rares in the promo blisters, dang)

I pulled the Full Art Lysandre during the weekly shopping in Walmart after I acted on impulse picking up two 3-pack blisters. Now I can boast that I finally get a 9 pocket of EXs and Full Arts. 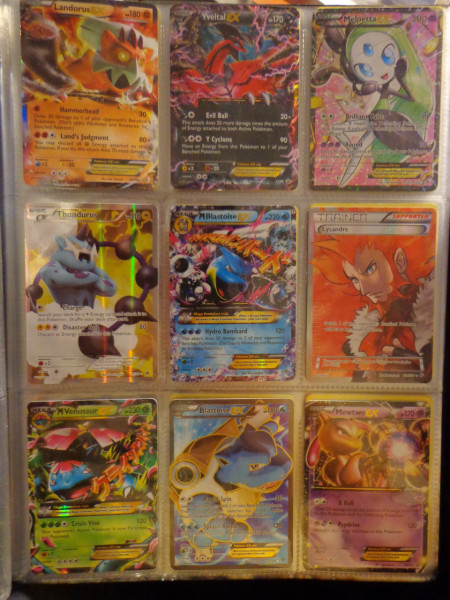 Stay tuned 'cause I am going to bring you guys some even cooler stuffs in the VERY near future.
Omg omg omg i'm crying! Thank you so so so much

denkimouse!!!! It was pure luck that i was around when miss gin posted that she had only 6 of the new HQ I Love Pikachu Raichu plushes up for grabs! She came in today and i've been hugging her ever since! She is so incredibly soft! Her name is Little Miss! I'm going to buy a cute ribbon for her this weekend. C:

Sorry for the crap photo quality, it's dark outside and the lighting in my room is terrible!
( Collapse )

Thank you for looking! :D

Edit: I got some better photos today!

We had a printmaking art project at school, and I have some extras to sell off :3 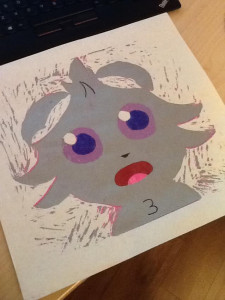 It was a very long and aggravating project, and took a lot of time, so I'm hoping to get 15 shipped per print. However I'm totally open to haggling, so offer whatever :) They're made using water-soluble paint and sharpie for the small black details. The paint was put on a linoleum block and then printed across sheets of paper. (the paper is pretty thick, I don't know for sure but I'm pretty sure it isn't just the average paper you use to print essays xD)

I currently have three extras to sell (I originally made ten, but I had to give 5 to the teacher to grade, one of them was completely messed up so I threw it out, and the last one I gave to

fluffyfurret xD)
I'll probably sell a few more once I get them back, since I don't really need 5 copies :P
Please keep in mind none of these are exactly the same! Some printed better than others, but I'm only selling the ones that deserve to be sold xD

Rules and everything: http://pkmncollectors.livejournal.com/15631554.html
Just ignore the ones that are specific to perler sprites

Hey everyone! I'm selling some Eevee charms from... 2012, I believe? See below if interested -- thank you!

Please note: I only ship within the US!

Hi all, now that I have a job again I'm going to start actively collecting Tomys again. I have made a wishlist of the figures I still need. Gens 1 & 2 are top priority, so that's all that's posted for the time being. My payday is Friday, so if you have something I want I can pay then.

Kanto (These must be the original Tomy releases, NO AULDEYS)