Is anyone selling any Bulbasaur pokedolls right now?

I am also looking for Sylveon and Meowth plush, and still hoping to come across a reasonably priced Play-By-Play Sandshrew.

I haven't been around in a while so hello old friends and new!

Edit: Thank you to everyone that has been understanding of this topic. I was hesitant to post this because it could come off as snarky or criticizing. That wasn't the reason for this post; it was to raise awareness on how people lack the knowledge to ship valuable items and how merchandise is destroyed because of such lack of knowledge. I was still pretty angered that my limited edition Darkrai's packaging got destroyed for something that I thought was common knowledge to a seller that had 1,000+ rating inside Y!J.

I wanna sit here and be that "I KNOW THAT FEEL" guy but I have a bunch of crap sitting on my bed waiting to be organized so I will probably check back later. ಠ⌣ಠ

And as always, still looking for the copper and gold Honedge figures.

It's been three whole weeks of searching and I still can't find a single copper or gold Honedge metal figure. These are the last two I need. Does anyone have these for sale? I'm looking to spend $6 for the copper and $10 for the gold (prices can be negotiated, though), not including shipping. Preferably from the same seller but beggars can't be choosers.

Also,if anyone just HAPPENS to have a MiP clear Darkrai Tomy that they wouldn't mind selling so I can replace my now broken one(I doubt it but a man can dream), I will GLADLY give it a good home, bring it breakfast in bed every morning, take long walks with it on the beach, give my unborn child for it, ANYTHING. In all seriousness, I cannot afford it now but if you can hang on to it until next week when I get payed, I would be forever thankful.


Do you ever just lose the ability to even? Did you ever get something you wanted so much, just for it to be completely destroyed in the mail because of bad packaging and cheap people? Do you then question if this is REAL LIFE?! How someone could be this dense?! (To put it lightly)

On Wednesday, I too lost my ability to even.
My jimmies were so rustled, that I don't think I've ever been this rustled since I couldn't pre-order my copy of Pokemon Platinum and couldn't get my Giratina figurine. THAT WAS A GRIM DAY AND SO WAS WEDNESDAY. (I later found out they sold for like 9 bucks on Ebay but STILL.) 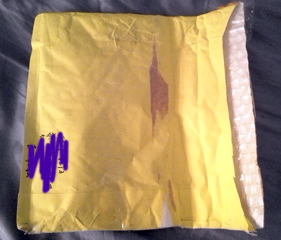 THIS. Is what a seller shipped my MiP clear Darkrai Tomy in.

THIS. Is what my face looked like when I saw said packaging. I knew the amazing little box it came with was as good as "ran over by a truck". I've never even SEEN this thing with its box before and unless I'm completely blind, I have not seen one pop up ever until a month ago, so I was super happy to win this and it was such a clutch win, too. I threw what I had left into this Darkrai and I barely won. I KNEW I WOULDN'T SEE ONE AGAIN FOR A WHILE.

The purpose of this thread wasn't just about my now worthless Darkrai; it's a heads up to all of you to learn from this and avoid getting your hopes and dreams crushed or crushing other people's hopes and dreams because of lack of knowledge.

-Unless the person doesn't care to keep the packaging mint and just wants the actual merchandise, DO NOT ship MiP items in bubble mailers. The box will suffer damage and if said box has plastic, it is very likely that the plastic will end up dented and in the worse case scenario, it will break.
A good point was brought up by

puckyducky: it's also not wise to just throw it in a box and wing it. Some crumpled newspaper or bubble wrap around the plastic parts or edges will keep the figure's packaging from bumping all over the place and getting annihilated. If you cannot afford old newspaper or bubble wrap for whatever terrible reason, use loaves of bread to cushion the blows this poor figure will suffer in transit. I'm not telling you to use a whole roll of bubble wrap, a little bit will do.
-Unless the person isn't too serious for a plush, DO NOT throw it into a bubble mailer without at least a piece of cheese protecting the tag.
-Also, do not ship plushes with plastic eyes with no protection on the eyes; you're going to have a bad time.

If I had the chance to give these sellers feedback, I would have made it rain blood and would have asked for my money back. But with using a middleman, this isn't possible unfortunately. I now have a worthless Darkrai, with dents and gashes on the packaging. Will I replace it? The better question is, CAN I replace it?

Or am I insane here? I can't be the only one that this doesn't make sense to. Why hang on to something that is limited for all these years and the proceed to ship it with no protection? You might as well kick me in the groin,shave half my head, and then paint my nails pink. (It would have been fine if they got painted purple.) Better yet, throw it in front of a train, because that's how it's going to end up looking by the time it gets to me. At LEAST the front of the box didn't get trashed but the bottom caved in horribly.
And for the curious, this is what the clear Darkrai Tomy's box looks like: 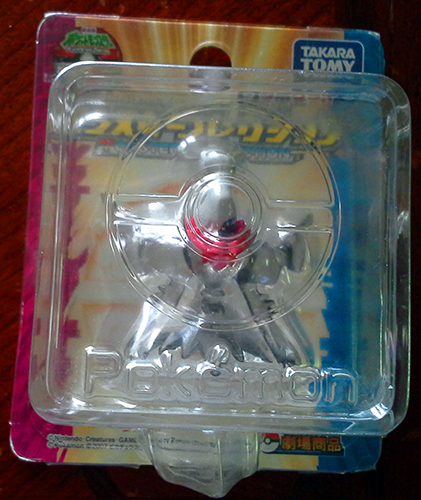 Hello
is so many time that I don't post...
hehe
now I have some gets!
from the Y!J I use Japonica Market service
( Collapse )

Please excuse my dear Aunt Sally use of a terrible ebay photo. What set/name/etc do I need to be looking for to find these glorious charms? Or are these even legitimate?

Hello everybody! I just have a really quick question for anybody who may know the answer. Does anybody know the exact date for the Ice Type MPC release? Or is it just at a completely random time that they are released? I know they were supposed to come out this month and I have seen a bunch of the giant Lapras plush from the Ice Type promotion for sale but I haven't seen the MPCs. If anybody knows the exact date that would be really, really helpful! :3
Picture for reference:

Sorry for the short, boring post but I will be back soon with an incredible gets post (with a holy-grail worthy item) and possibly a reintroduction.
Thanks everyone, have a nice day/night! :)

I had been nervous about using FromJapan and items getting lost, but everything went smoothly and came super fast! Everything I am super excited about. Especially one item in particular that I have been searching for since I joined ^_^ 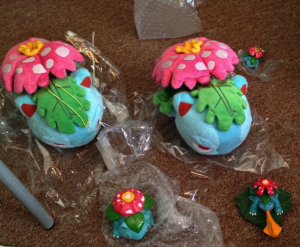 Onto the pictures!
( Collapse )

I've never posted a photo of my collection, since I didn't have one before. But here is my efforts of one month of collecting. There are a few plush that are not in this picture, well only two, so this is pretty much my whole collection.

So help me grow my Mew army! I'm looking for anything Mew, but especially looking for plush. There are two that I'm currently specifically looking for, and will pay out the wazoo for and those are:
-The Pokemon Center Fluffy Mew
-1:1 Talking Mew

I did terrible with the cards of this set. I only got 4 (Chespin, Inkay, Fletchling & Bunnelby, but I'm getting Snubbull in a trade). I was wondering if any of you had the remaining cards. I have extras of

I need the rest, so if any of you guys have them I can trade. I also have an extra Pikachu toy as well. I got my sales permission form dakajojo on 9-3-11.
Hello all again!

I have decided to post a permanent sales here on the comm so that my sales are better protected by the comm rules and such. :3

Sales permission given by Allinia on March 2013

*I am not currently open to trades*
( Collapse )

( Collapse )
Thanks for stopping by and I hope everyone has a good summer!

Hello everyone~ thank goodness school is finally over....Now here come some fun time XD ~~~ This summer so many goods coming out such as pokedoll charm, sylveon pokedoll >w< ah!!!!!!!!! Now my wallet is dying Q___Q.... so i need more money so i can spend more on pokemon stuff XD hahaha~~

Here is my sale post, plus i had re-price some of items such as charms and clearfile. Feel free to ask any questions you had

Hey all, I'm looking to buy some keshipoke mainly swampert and aggron. If anyone has either of those are any other gen 3 pokes in general please let me know. Plus if anyone has a shop that they sell keshipoke from let me know.

More rambling, if anyone has a swampert key chain or other like really small swampert figure let me know. Sorry I'm just all aboard the Swampert train now that the mega was announced lol.

Hey guys!   So seriously everyone's bday is coming up and I have another request for finding a present.  My friend super wants the mew pokedoll and I would love to get it for them.  It doesn't matter if it is Japanese or US release.  I would like it to have hang tags if possible though.  I don't really have a budget right now, but getting a good deal is always nice.  If you have a Mew Pokedoll for sale I would love if you would sell it to me!  Thanks for reading!  P.S. I live in USA for anyone who has shipping qualms!

One last attempt to get rid of everything. It's all crazy cheap and there isn't much left! :)
Has anyone seen any of the mega tomys anywhere? I check Target, Wal Mart and TRU once a week and have found nothing :(

Game of Thrones is on. May take me an hour to respond xD 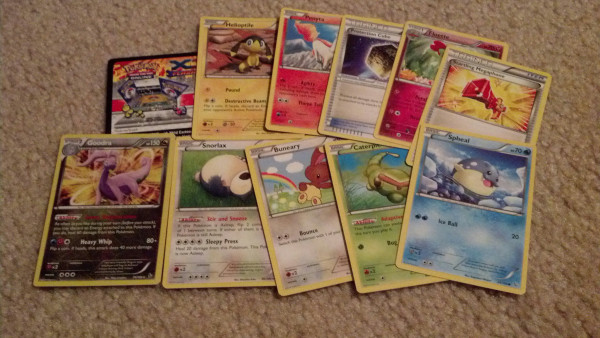 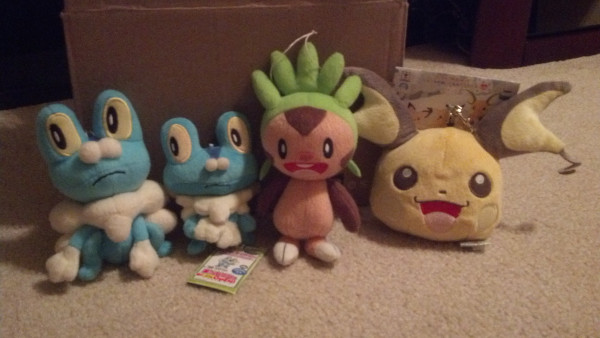 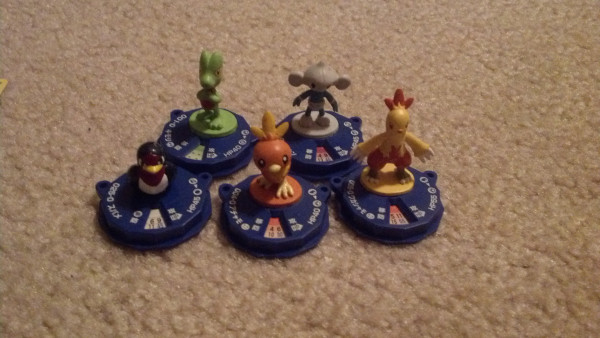 Spin figures: All $3 $1 each
Treecko is missing tail -free (will raise shipping)

Hello Community! Long time no see! It has been very busy lately (with work and other RL things), however, with the new pokedolls that were released I was hoping someone might have an "in" or might have ordered some extras of Tyrunt and Sylveon they might spare (for a fee of course!). Would love to work with someone direct (so that I can have a paypal invoice come to me so I can pay appropriately, as it is the easiest payment method for me).

If anyone might be able to assist, that'd be great!

Have an awesome night!

I need some informations on the meowstic beret that I found on amazon (here).
I want to know if it's kids size or can fit for adult too, because I want it so bad XD

Thank You in advance n_n

EDIT: I found it on ebay and it's adult size <3
Collapse