I've added more plush to my sales. c: Including, but not limited to, the Japanese Leafeon and Glaceon pokedolls, Samurott/dewott japanese pokecenter plush, Piplup DX pokedoll, and more! Also still have other rare pokedolls (like grimer and budew), and banpresto (altaria) plush that need new homes. x3 I am also open to reasonable haggling. c:

Also! Does anyone have any idea where I can get the new Klefki key holder? I spotted it on ebay last night ( but it was over $60!! it couldn't have gone that crazy already!! oxo;; ) and was wondering if there were any other places that had it? There's always y!j, but if I can avoid using them, I will (as that site is hazardous to my wallet) xD
Thanks so much! c:

Hey guys!
i have loved looking at everyone's collections and see new faces popping up every now and then,
and i've mean meaning to crawl out of my (cerulean) cave and do a re-introduction,
So here goes nothing!
My name is Ash, i just turned 24 in June this year and yes i named myself Ash after well, Ash (And proud of it)
Oh and i live in the smallest little country in Southeast Asia, Singapore.
I've been a member on this community for a couple of years now, i think i'm turning 3 this August!

i grew up with pokemon like i'm sure pretty much almost all of you have and i started hardcore collecting plushes like pokedolls after i first laid eyes on a Ho-oh Pokedoll with the blue starburst tag in Singapore and has never looked back since.
My mum used to think that my plushes were awesome and super cute, well until i managed to fill like 8 boxes of them and now she's like
"you do know you're not gonna have that much space to display them ALL."

My favourite region has to be the Kanto region since my childhood was all about them 151 pokemon and since i finally got off my lazy ass today, i managed to take out some of the plushes that mean the world to me for a photoshoot!
Since a picture paints a thousand words and i have quite a few of them to show, please allow me to get a move on and present to you guys,
my kanto babies! 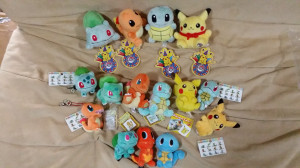 So I'm here asking if anyone would like to sell theirs to make a good amount of money?

I'm looking for Porygon2 and Psyduck. I would like them to have their tush tags and hopefully no discoloration to their eyes or fabric. I'm willing to drop $950 on porygon2 and $450+ on psyduck. This is before fees and shipping too. So if anyone out there is in need of some extra cash or has been thinking of selling their plushplush, please let me know! I can pay right away too! :3

Also I'm looking for a gengar plushplush MWT for a friend if anyone is interested in selling theirs as well.

edit: I am deleting all comments that are not helping me find these plush.

Hi all :) I'm looking for someone who can buy a Pokemon item for me from ebay in Germany. I asked the seller if they would ship it to the US but they declined. The item has a buy it now option so I'll be home most of the day to pay for the cost. Any help would be appreciated :D

Oh man, it's been a while, I haven't posted here in forever!
I hope to have some time to do a collection update sometime in the future, but in the meantime I have some items for sale (and up for auction).

entirelycliched on April 2nd 2012
-Feedback can be found here http://feedback.pkmncollectors.net/feedback/view/littlezorua/ (new) and http://littlezorua.livejournal.com/1612.html (old)
-All community rules apply
-Prices are in USD
-Payments via Paypal only (please do not send as "gift")
-I ship internationally from Canada (please note that shipping can be expensive, especially for plushes)
-Shipping is included in the prices listed (so no quote is needed)
-Please ask if you need insurance or tracking, as I am not responsible for your items once they are shipped!
-Note for auctions: BIN is void once a bid has been placed.

EDIT: Revised some of the prices, sorry dearies!

Thank you for looking :)

entirelycliched on 7/27/13
-Feedback http://feedback.pkmncollectors.net/feedback/view/biodew28/
-I ship from UT, USA
-I am currently selling to ONLY USA BUYERS
-Prices are USD and do not include shipping or fees
-Paypal buyers only
-Feel free to haggle, but don’t be offended if I decline your offer
-Please pay within 24hrs of commitment
-If you ask for a quote you will be given priority on that item, however, if you do not respond to the quote offer within 24hrs I will move onto the next buyer
-Tag protection upon request
-My house does have cats. They don’t touch my collection, but those with severe allergies be warned. 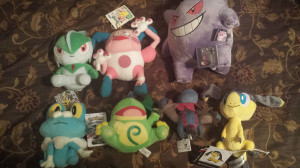 Thanks for your interest!

I ship out once or twice a week.

Thank you for looking!
~Sophie

Hello! I have a few things for sale
Here is a preview! 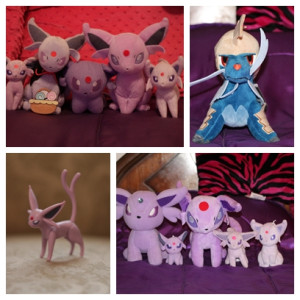 I'm looking to knock off these 3 kids figures from my wants list!

If anybody is willing to part with them, I'd be more then happy to take them off your hands and add them to my mudkip army <33

These are the last two mudkip kids I need to complete my mudkip kid figure collection, since I finally knocked off the other shiny variant from my wants last <3 Audino is just another wants of mines!

Now is this the list of the Mudkip kids figures? I wanna make sure I've got one of each. So far I have: