Hey guys! After thinking about it for a long time, I've decided that it's time to part with the majority of my Pokemon collection. I just don't have the cash to keep collecting, and space has really become an issue, to the point where I just can't enjoy my collection as much as I'd like to. So I've decided that it's time to hand these guys off to someone else who has the space and time to really love them properly :D

Under the cut you will find lots of Pokedolls and a Leafeon Canvas for direct sale, and for auction a MWT Dragonite Pokedoll, a rare Banpresto Dragonite plush, a Pika In Love keychain plush set, and a very sought-after Flareon TFG!

Hey everyone! Just a reminder that the VS cards lot ends in a day! So get those bids in. All of the cards are at a very cheap price! Many have no bids!
Go here to bid!
http://pkmncollectors.livejournal.com/17734908.html

We still need to raise about $25 more.
Lots of rare pokemon and these are some rare cards!
Good luck everyone!!

I am looking for two johto centric things~ all images are borrowed from google, and I will remove at owner's request! shipping for both of these will go to 93455~

first is a JAKKS CYNDAQUIL PLUSH. I'm hoping to get this for under 20. it doesn't have to have tags, and it can even be a little loved! its the last one I need to finish my starter trio. <3 (it shouldn't have flames on the back- that one is the hasbro <----thanks 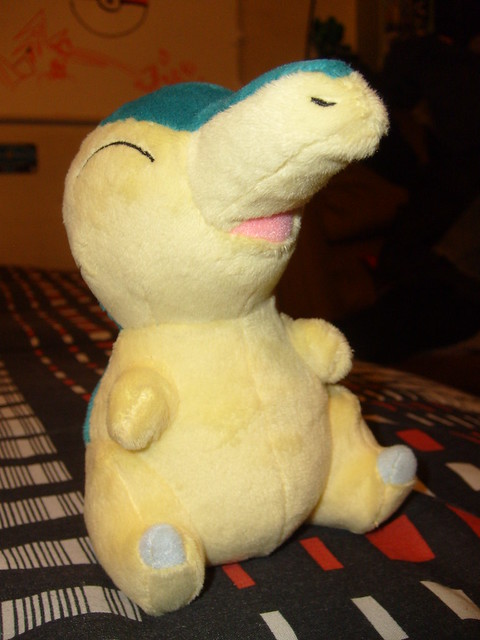 the second item is harder to find, and I won't be upset if I can't find this one right away! I'd -love- the JOHTO CANVAS SERIES PORTRAIT KEYCHAIN. I'd like to spend about 25-35 on this at the most. if that's unreasonable, please let me know! (img found on google from polahbear. let me know if its ok to use, hun?)

I also kinda need a bulbasaur pokedoll. most recent release and tagless, please. this is going to a child. <3 (she pretends that there are bulbasaurs hiding around her momma's work, its adorable.)

Hello guys again!
About two weeks ago, I have decided to take out just about every flat I own (and new ones I have gotten in the mail) and make a Storenvy account out of it, soo for the last 10 days, this kept me busy, as the process to make it was really time consuming! The thing that always made kind of sad was how unorganized my flats sales were, so I have decided to make a big project and list every one of them one by one.

Now through the search bar, you can either look for any Pokemon or humans you are interested in, or even the kinds of flats! So you can search for Amada, pan, magnets, cards and other goodies! 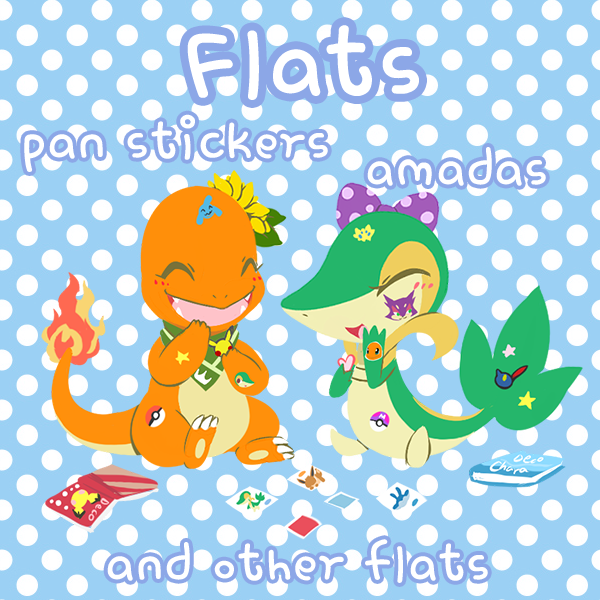 Sadly, there is a limit of how many products I can list, so the store lacks Gen 1 and 2 Pokemon flats and some few from other Gen as well. So if you are looking for other specific Pokemon you don't see over there, just let me know and I can give you pictures of what I have available!

And one thing I wanted to ask:

I have gotten this adorable drawstring bag for myself to use, however, I really have no idea what I am supposed to put in there (or for what it is supposed to be). Even though you close it, it has holes from which items could fall easily. I at first thought that this would be more or less like a bag for bottles, but alas, it's actually smaller than I thought! Any help would be appreciated!

Hey guys! Im going to update with some gets very soon, but in the mean time.... Does anyone have a tomy Abra laying around they would sell me!
Just let me know!
-thanks,
nico

Recently I purchased this large Raichu plush and have been curious of its origins (branding/makewise)
As the only tag on it just has safety confirmation and I have never seen one like this before.
Any idea's? :) 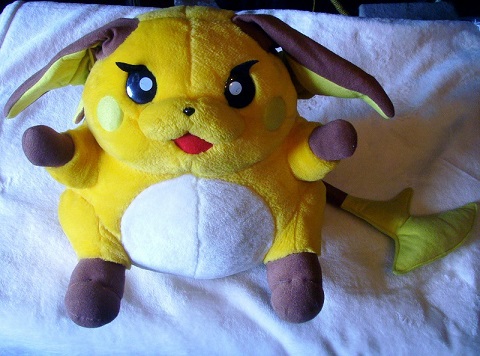 **If you are in the U.S. and live around the U.S. and Canada borders at Niagara Falls, please contract me! This would regard something during December!!**

Could anyone identify if this is a bootleg or...a mirage plush *fingers crossed*

Hey guys! So I just had a quick, tiny want today! I was wondering if anyone was selling preferably a green FCS base for my Vulpix figure? I'll take orange if no one has a green one :)

Also, to everyone who purchased fro my sales recently, everything will be going out this Friday- sorry for the delay! My sales are also still going on and there's a ton left! Take advantage of the 5 for $1 dirty/marked kids sales for repaints!

Sales Permission was granted on 11/28/2010 by Denkimouse
Feedback link is here: http://feedback.pkmncollectors.net/feedback/view/eevee_evs_lover/

Here's the original post to go to the sales! http://pkmncollectors.livejournal.com/17725783.html

I hope everyone has a lovely day!

I've been rather busy lately, so I haven't posted around here too often...
You may have noticed that I have a new profile pic ^__^ It's Noivern eating an apple, yay! :D Isn't he cute :> I love Noivern, he's my favorite Gen6 Pokemon, and is actually now on my top 3 favorite Pokemon list :D

Anyway!
I never actually shared my card collection with you guys, so I thought why not? :)
I am not a hardcore card collector, I just collect them a little on the side and am mainly interested in their nice artwork.

So on Saturday, my boyfriend and I went shopping in our town and we have that little secondhand hobby shop that has all kinds of stuff. Sometimes, they have some oldschool Pokemon cards, and I love oldschool cards the most and they actually had Jungle and Team Rocket booster packs there!
I already bought some of these before, but I was so happy they still had some. And in fact, they had some English packs of these sets for a really good price ^^ Only 3 Euros, which is about 4 dollars each I guess.
So I bought 2 Team Rocket and 2 Jungle.

And look what I pulled :) 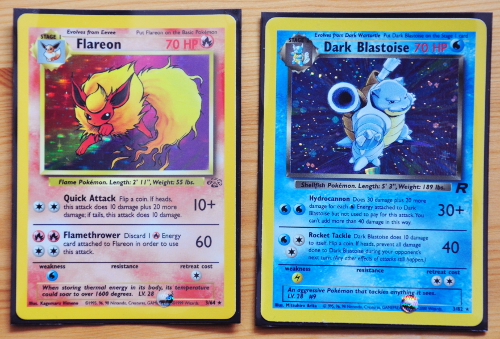 Flareon is from Jungle and Dark Blastoise from Team Rocket. I was so lucky to pull 2 holos out of four packs. ^^ The other time I bought 4 packs and only got one holo :D I consider these quite nice pulls since they are actually among the rarer and cooler ones of the respective holo rares in the sets I believe ^^

More of my card collection under the cuts :)

Other than that I still have a ton of uncommon and common cards from different sets ^^
I still don't have binders for my cards because I never get round to buying some xD
Anyone got some tips which binders are best? I wanna double protect the cards meaning first putting them in a sleeve and then in the binder, so that dust can't get in.

Thanks for watching and reading :)

Hello Everyone!
I feel like it's been forever since my last post haha. This summer has been crazy busy. I just wanted to post my updated sales =] I'm not really looking to trade at this time, but I'm definitely willing to haggle ESPECIALLY if you're interested in multiple items. Click the banner to be transported =] 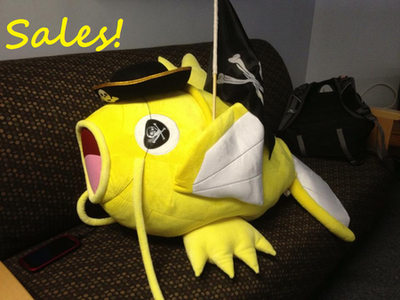 I ran a GB for 2 movie MPC sets and they just arrived today, i figured i would show everyone some pictures since they are fairly new and people might be interested in what they look like outside of stock images or poor quality ones on YJ. 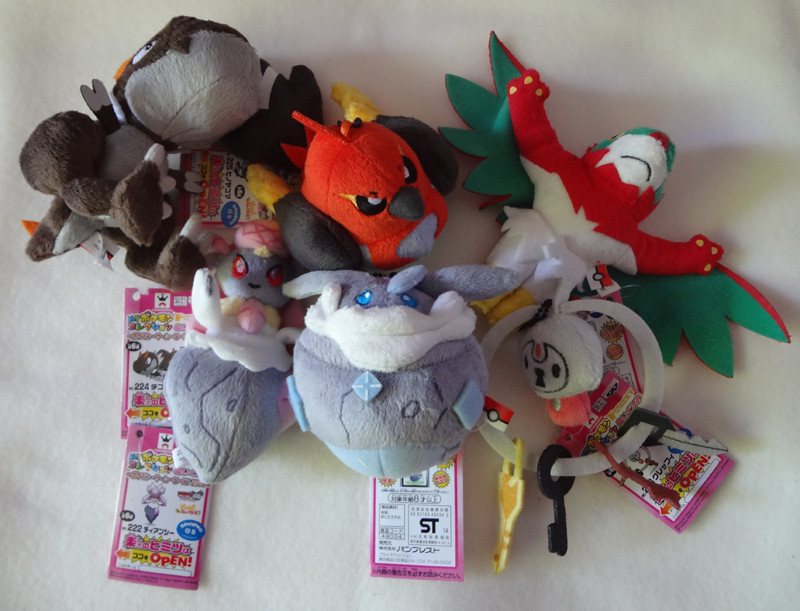 thanks for looking! Everyone who participated - i will have your payment 3 totals in the next few hours!

Also - i still need payments from

Hi everyone! I'm very excited because I just got a bunch of Tomy figures from a craigslist ad and I didn't get kidnapped! Haha. I really like the style of older Tomy figures, they have that almost watercolor like fading, so this is an awesome find for me though I know they're not hard to come by. 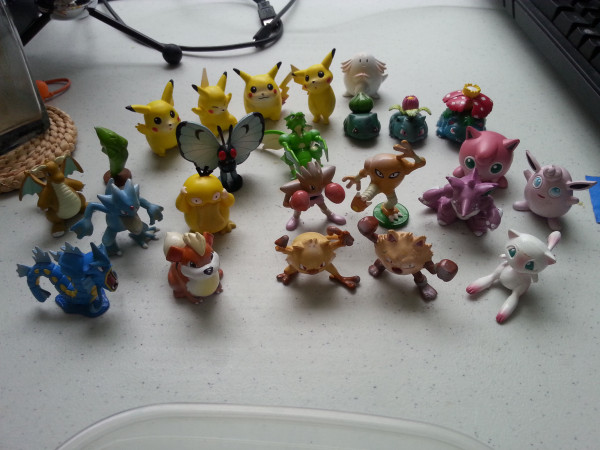 A few are scratched up but most are in great condition and just need a little cleaning.

Hey guys, just thought I would share my feraligatr kid that came in the mail today! 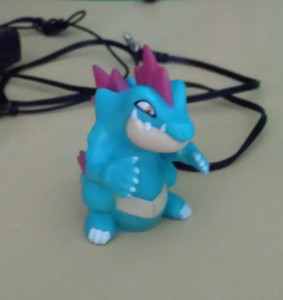 He is so cute and my first pokemon kid; I need to get more of these.

As for the wants, I am on the lookout for:
- feraligatr line zukan
- feraligatr and totodile minicot
- feraligatr ufo banpresto plush (this is my grail, I know it's a long shot but I feel like I should ask anyway)
Let me know if you are willing to sell these, I'm not positive on a price range but I would like to try to work something out.
Thanks!

I really need more space in my room :/
So I'm selling most of my espeon stuff and I've lowered the prices so if you're interested come have a look at my permanent sales post :) http://kroh2011.livejournal.com/3102.html 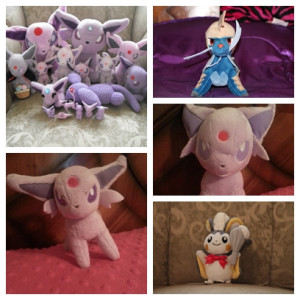 I'm preparing to start accepting offers from my recent sales post. Many items are still at their starting price. If an item does NOT have an offer yet, I'd be willing to consider offers below the starting price. I'm trying to get most of this stuff out of my hair to make room for other collections. Please do not be offended if I do not accept your haggled price, though!

Click the Meet Mew book to be transported back to my offers + sales! 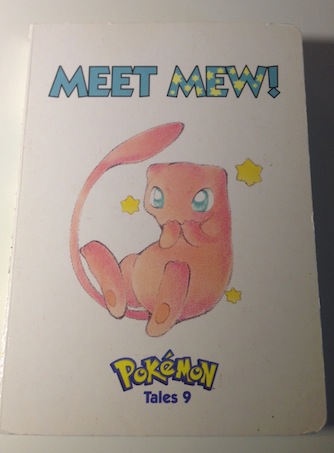 The main purpose of this post, however, is to actually show off one of my recent gets! It may not fit into one of my main collections, but I think it deserves a post by itself! <3 I haven't seen many posts about it in the past, so hopefully this post will be interesting for others. 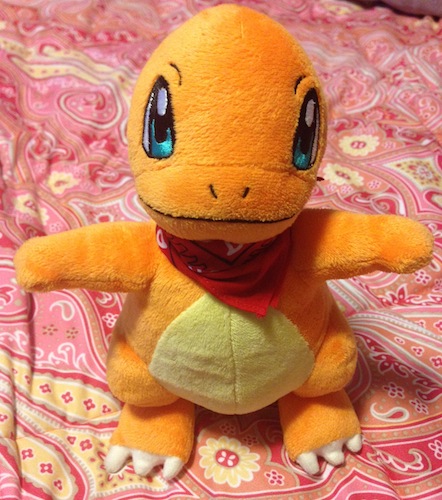 Thanks for reading! :D

Hiya
I have lowered prices and added a few things to my sales post so have a look :)
I encourage haggling so please feel free to make me some offers!
Trying to get rid of all this stuff 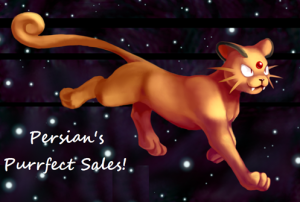 Hope you have a good day!

Short post. I'm so angry with myself because a lot of my plush have been sitting on shelves, which, though I know wasn't ideal, I thought would be okay. Today I tried cleaning my Flareons, and the dust is proving a nightmare to get off.
On the bottoms of the feet, there was so much dust that, even after brushing it off, has left a sort of black stain on the fabric...

So, does anyone have any advice for getting off dust from plush, but also how to remove stains left behind from it?

Google doesn't give me helpful solutions since they involve being far too rough with the plush and I'm worried about damaging them even more.