Coming out on September 6th with Spooky Party goods:

Pumpkaboo and Mega Gengar PokeCen plushies! :3 What's most eyecatching is the shiny Mega Gengar of course! This is part of a "white" Mega Gengar campaign. (Check out the TCG card here! So pretty.)

Pumpkaboo and the Gengars are on Sunyshore; Oops! will be added at a later date~
Hello all!

I know I don't really post my collection much but I've recently (over a few months) have gotten quite a few grails or close to grail status items!
:D

I want to start the post off with a plush I dyed to make it into a shiny!

The rest of my collection can be found here!
Im also planning on taking a year or so break from serious collecting so I probably won't be on here as much.
BUT before I do go away I would love to find the last few plush I'm seriously after.

So if anyone has the Voltorb bowling plush or Psyduck plushplush, I'd be willing to buy/trade/partial trade for them!
Just let me know! Looking to spend $150 shipped max for Voltorb and I have a lot of rare items to trade for Psyduck.

I hope everyone has a good night/morning!

I had another huge load of gets this week :D I've been pretty busy though so haven't even had time to enjoy it all xDDD 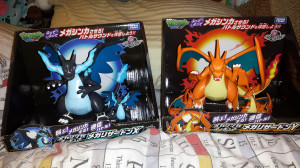 Mega Shinka figures!! I haven't taken them off their box-stand things yet, I haven't "willed" myself to do that yet... how do I break this will so that I can actually play with them? This used to be so much easier to do when I was little lol. I put the Super Size TOMY and the Charizard kuji figure from my previous post for size comparisons :D 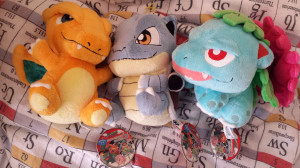 !! This kawaii trio!! All with their hangtags, I am really amazed :O They're practically the same size as the Mega Evolution plush so it's like... amazing putting them all side by side. XD I'll try that some other time though, I've got too much stuff to sort through LOL

But okay, to the real subject of the post... HEATRAN 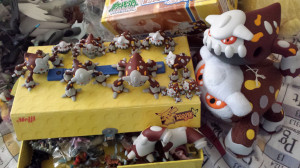 I got the DX Soft Vinyl Figure (Sofubi) from my gets this week. It came in a pretty big box that seemed to have been opened once but I'm not sure since it was taped together anyway. The back legs came attached, but there's no instruction on how to get the two front arms inside! (I can read Japanese and everything on the back of the box is just disclaimers) I've tried forcing it in, but even to the point where my hands start hurting, I can't get the arms to go in... and of course I don't want to damage the sofubi... What am I supposed to do? x_x At the moment, I'm guessing dipping the arm nubs into near boiling water for a bit to soften it temporarily would be a method, but is that safe? Is there a better method?

I also just realized I don't have Sylveon and Jolteon chupa/candy figures of pretty much any sort, so I've added that to my Wants list. Please check it out!~

Like 2 weeks ago I am on the hunt for Kids or other official figures for some that didn't get Kids.

Would prefer to buy a whole bunch from the same seller just like last time.

I need to fill the claims or I cannot do the pick up!

Remember how a few days ago I posted on eBay problems and receiving the wrong plushes? Well... today my plushes got here at last! 8D

But before we get to them, I also have to show you some plushes I got from FJ *w*
( Collapse )

Thanks for reading and joining my eBay adventure from start to finish! c:

I just moved in my dorm yesterday, so I figured I'd share my Pokemon dorm :D It was so hard picking who to bring with me :o 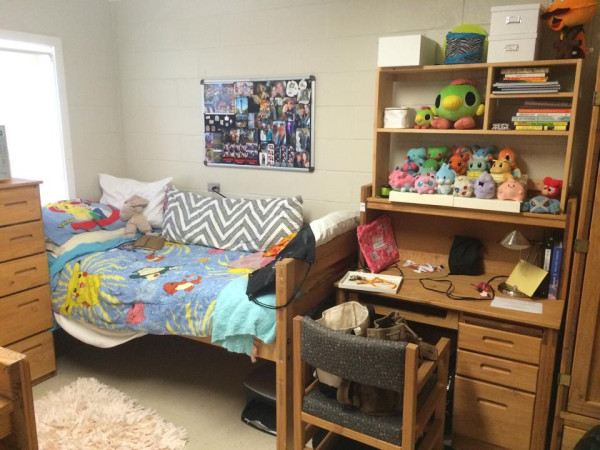 Look how cute! Had to leave about 15 Pokedoll behind along with all my figures and generic plush. I miss dem :,(

And for those who are wondering, Im attending a very small college in Virginia called Randolph-Macon. My class is about 300 students :3

Hello everyone! I recently went on a mini shopping spree on Amazon for school stuff, and saw a female Meowstic for a decent price. I know Amazon is known for bootlegs, but the seller looked legit and it cost more than I see booties being sold for, so I just threw it in my shopping cart.

When I opened my package today, I found a male Meowstic plush inside. I was going to get one eventually so it wasn't a problem. The problem is that he looks like he could be a bootleg. If he is, I am returning him as soon as I can. Any help would be much appreciated!

Pictures below cut! (my apologies if it doesn't work, this is my first one!)

Edit: He is real! Thank you everyone for the quick response! :D

Hey all, Goldy's coming at ya with some freshly updated wants and some rad stuff to trade! Check under the cut for all of the wanting and trading goodness.
( Collapse )
I am hoping to trade for now, as, for the time being, I don't have a lot of spare cash. Though I'm expecting some disposable income to flow in in the next couple of weeks, so if you have something I want and I don't have anything you want, I may ask you to hold onto it for a bit if I REALLY want it.

After about a month of waiting (or maybe it was only a few weeks...it felt like forever! lol), my Korean Booster Box of Series 7: Hidden Powers arrived today! :D I'm SUPER EXCITED about this because I never thought I would find this set. I had been searching for about 2 years and had someone try to sell me one for about $50 a few months ago (which I passed on). I randomly checked ebay one day and they were selling for $20. EEE! And, the whole reason I bought this box? It has Houndoom and Houndour cards! lol.

Set list can be found here. I'll be keeping one of each of most of the other cards in the set. Everything else will be for sale/trade, so if you see something you like during the Livestream, feel free to let me know. I suggest commenting on this post with your interests since I might lose anything said in the chat box. (I do want the Garchomp EX card but I don't have an interest in the Gardevoir EX).

If you're looking for Korean cards from other sets, feel free to let me know. I have cards from some other sets.

Livestream Link As usual, my dogs will probably make an appearance at some point. My livestreams are silent, so don't worry about your sound. I will be typing in the chatroom as "maitaidelight" or "risha." LIVESTREAM OVER!

Edit: Was going to stop about halfway through the box but I still needed Garchomp Lvl X, so I ended up opening all the booster packs. And...no Garchomp Lvl X. O: This is the first Korean box I've bought that didn't have both Lvl X cards. I did pull a Gardevior Lvl X, which is available for trade/sale. I also have a duplicate of the Ho-oh and Gallade holographics (and most of the other cards in the set).

Still looking for most things I mentioned in this post - Link (Topps, Flipz, TCG cards, and any Houndoom/Houndour merchandise including non-English TCG cards). My Furious Fists list is a little outdated since I did recently get some of the cards I needed.

Also, I doubt I'll find them, but I'm looking for the French Eeveelution cards from the McDonald's promotion. Read more - here.

Three of my high wants right now are -

the foil version of this card -

And the Mirror/Reverse Holo versions of Houndoom and Houndour from the Japanese Reviving Legends TCG set (and possibly other mirror/reverse Japanese cards).

Just wanted to let anyone who may be interested in hosting a GA/GB know that I have uploaded two sets of Pokemon plush to ebay.

The first is an Eeveelution plush set. All official and MWT.

The second is a random assortment.

In case it is needed, here is my feedback and SP info.
Feedback : http://feedback.pkmncollectors.net/feedback/view/acciolucius/
SP granted 7/2011 by

Hi all! This is my reminder post for my League poster auction/straight sale symphony poster.
The link is below. Most of the posters are still on their starting bids of only $5!

Hi!
I'm still looking to buy figures/straps for 6 shipped :3
I'm open to anything, but Mega Evolution figures/straps are priority. Flat customs would be cool too, so let me know if you guys have anything ^^ Just please don't be offended if I decline, I'm also looking at some stuff on ebay so I'm just seeing if there's anything better here XD

Hello everyone!
So after some thought and searching I have come up with a new want: A noctowl pokedoll!

So if anyone has a "down" noctowl for sale, please let me know! :) 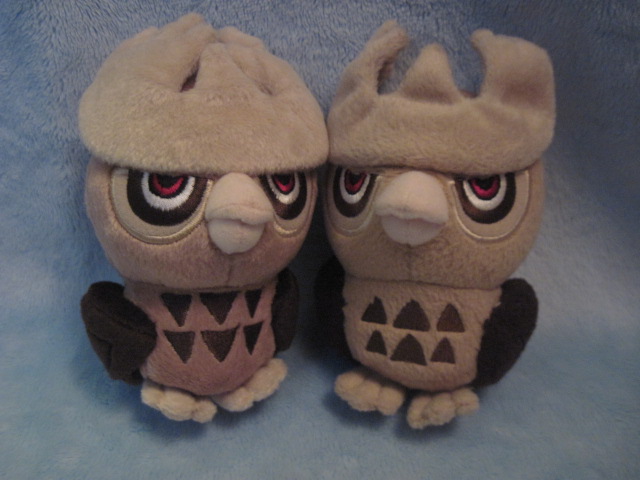 So as for the meme, propose the following:

In your opinion, what are the 10 rarest pokedolls (in any order).
You don't have to own them, but if you do, post some pics!
This includes pokedolls only, no plushplush, and no variants like DX or mini etc.

Who would you pick?

Hello all, how is your collecting going on?

My permanent sales post is now up and running once more!
Click the picture or the link to be directed. 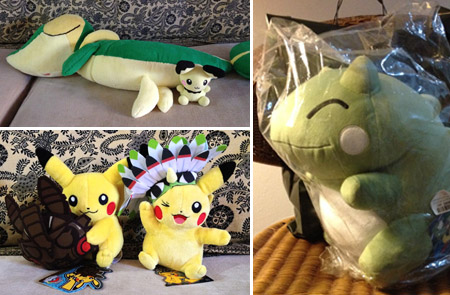 I bought a cute little pikachu plush in a charity shop and ever since I looked at the tag, I've been wondering where it's from. It's also very frail and sensitive. Let's have a look at this( Collapse )

Thanks for the help guys!
Collapse