I am a newbie to this community, but I joined LiveJournal specifically so that I could participate in this community with fellow PokeLovers! I am so excited and glad to be here. My primary Pokemon activities involve playing the DS/3DS compatible games, battling competitively in VGC (next year, y'all!), and collecting plushies!

Now, my two favorite Pokemon are Munna and Tepig, and I would like to start a Tepig collection in homage to my first Pokemon EVER! Right now, I only have one Banpresto Tepig plush. SHAMEFUL. I NEED MORE!! And not just plushies- I want EVERYTHING Tepig- cards, plushies, figures, keychains, artwork, you name it!!

Anyway, help on my quest to become the crazy Tepig lady would be greatly appreciated! Thanks so much!

I'll have a collection update soon, I promise! I've been so busy with work and travelling this last month or so that it's just not been possible, boooo. But I did pick up a few awesome pokédolls on holiday!

Right now I'm still looking for the following items, they're in order of priority!

As always, also interested in any Full Art TCG and Pokédolls! :)


And a sales reminder here with updated prices, haggling welcome!

I have been a bit absent in the group lately because i have been busy caring for a baby bird! (he is a huge pain in the butt) and i have been meaning to ask this question for a while, But has anyone here made the Tyranitar Version 1 Paperpoke.... i have not been able to figure it out for the life of me!! some help would be much appreciated as id love to have this guy sitting with my other T-Tars :D :D

Does anyone know if megas have/will have Zukans?!

Hope everyone had a wonderful halloween. I carved an electrode and then he used self-destruct =D

Hello everyone, I hope you are doing well! I actually had some free time last weekend for once so I started playing Pokemon Mystery Dungeon Explorers of the Sky again~
Anyways, I was wondering if anyone would like to trade cards! I am looking to expand my eeveelu card collection, especially international cards!

( Collapse )
Thanks in advance, and have a great day/night!

Anyone interested in applying to be a community moderator should get their applications in ASAP!

We plan on having the new moderators in place by the middle of the month, so please email the following application to pkmnmods (at) gmail.com within the next couple of days. If you plan on submitting one but need additional time, please let us know so we can accommodate you!

Again, send the above to pkmnmods (at) gmail.com, and you should get a reply shortly that we received it. We will not be replying again to say yes or no, we will just post the final outcome to the community. If you don't get the job, please understand many people will apply and this will be discussed by many mods and members together before we pick somebody.

Just Wondering If Anyone Had Any Of These They're Willing To Trade/Sell?

Also A Little Reminder My Sales Post Has Been Updated With Some More Zukans, Eraser Figures And A Few Other Bits And Bobs :)

Thank You In Advance Guys

Hello everyone! Last month was so intensive for me, I recieved lots of figures to update my collection.
A total of four shipings came to my house and soon others will arrive and now I can make lots of new photos :D
Sorry for the blurred pics, but my house is a little bit dark >_<

the first arrived is the Suzannespeon parcel
( Collapse )

The second one is the Ippai Fairy series, directly from Japan
( Collapse )

The last parcel came from ebay like most of ties :D
( Collapse )

And this is my last try of repaint this candy container Poliwhirl in a shiny version:

A little update of my tomys
( Collapse )

Hello everyone, I bring you today my sales, which I would really like these to go to good homes so if there is anything you want, please make an offer. I need this stuff gone!

Mega blocks are now just 5 dollars! Though they are exempt from my buy one get one free rule. Almost everything else though is buy one get one free!! I also have absol offers up right now with most at their starting prices! Please come take a look:) 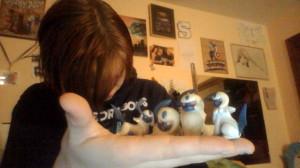 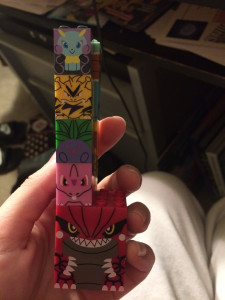 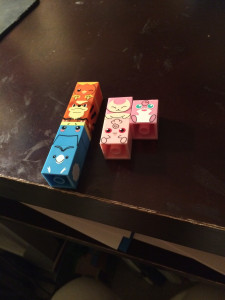 
Thank you !! I should also be having some new items come in from japan that I will add to my sales:)

Have a nice day everyone!

I got these thingies in a lot and weren't really interested in them, sooo here we go! 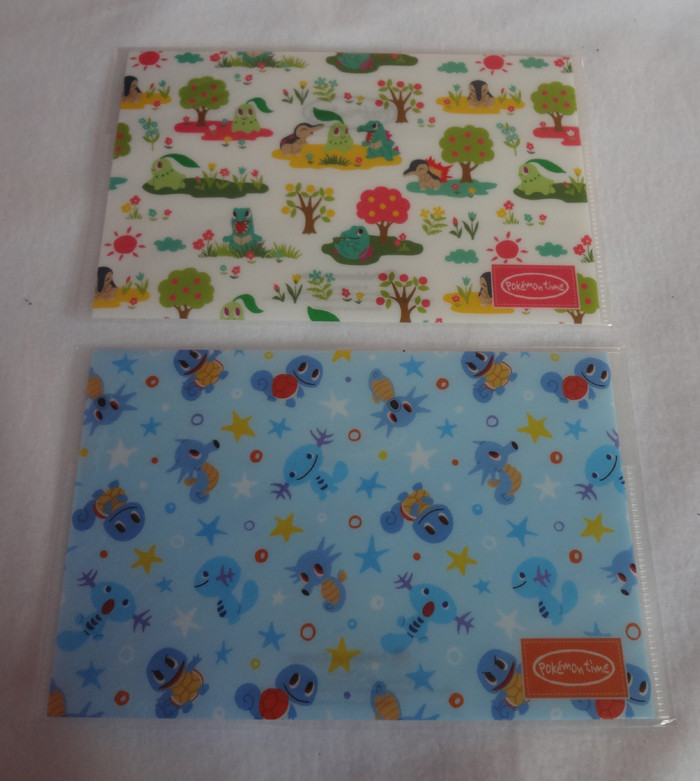 2009 Pokemon Time Mini envelope/clearfiles: $8 shipped each (will be shipped flat in an envelope) 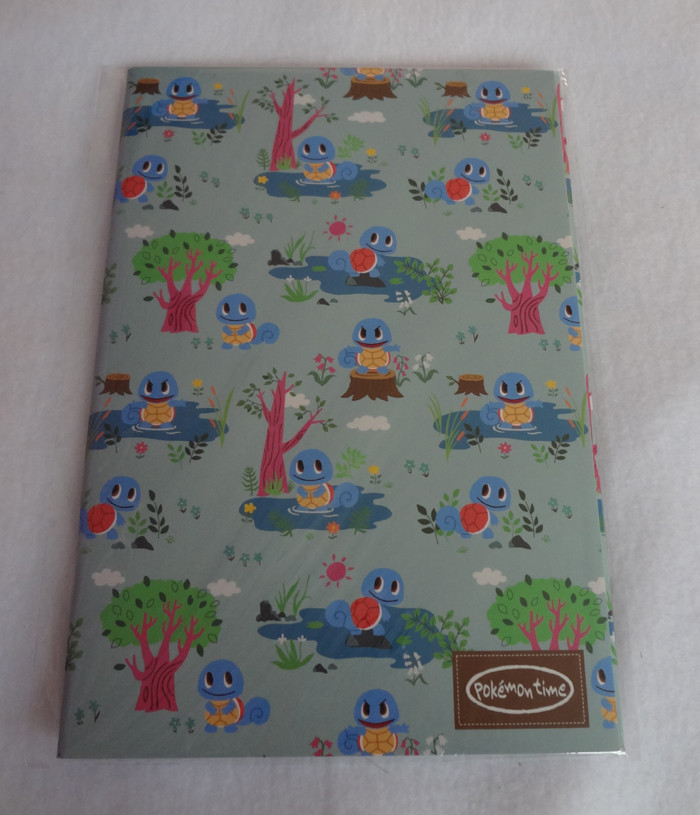 I have my sticker/movie item sales over here still: click

So yesterday  I bought a pokemon lot, you know from who? From my neighbour haha!
I bought 25 dollar (20 euro) for it, there were no TOMY's in it but I liked the other figures so much that I decided to buy them, it was only 20 euro so what!

I have some questions about the unidentified figures. They are made of hard plastic and are from a company named:hua nguyz (probably china). I must say they look pretty cool and sturdy, I like them.
But what are they exactly? Are they official? Are they bootlegs? I would like some info on these figures if possible!

But enoug talkin' here are the pictures! 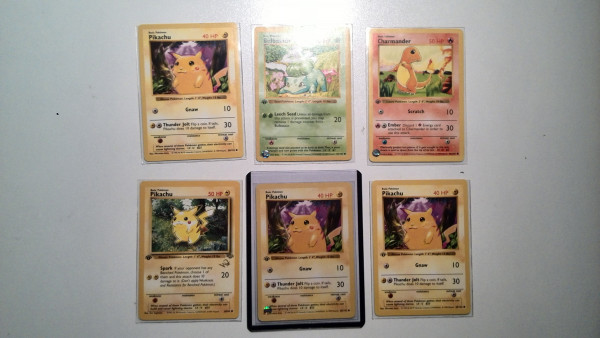 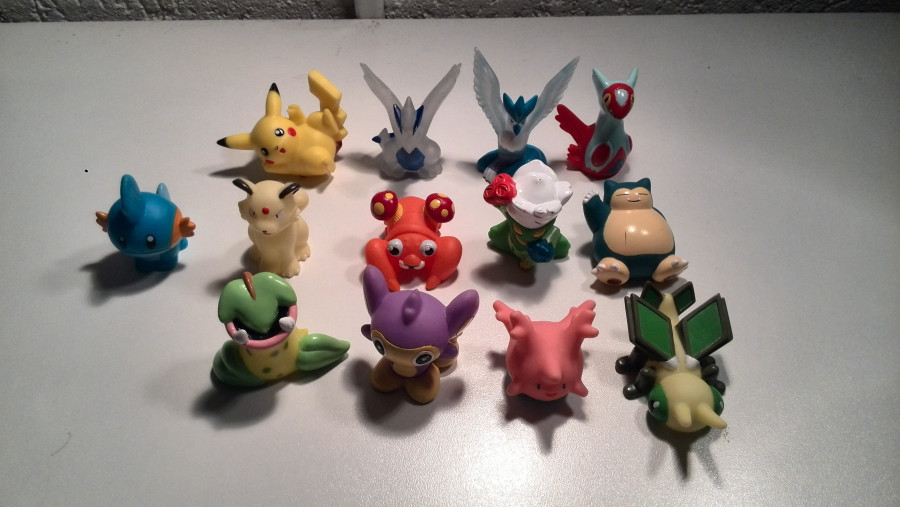 I'm pretty happy with my finds!

What do you think of it?!

Hi guys! I was a bit busy this weekend since I was out on the bigger Con of Spain so this is the reminder for my rare zukan pieces offers! I'll close them soon so don't miss this chance to get the rare parts for a good price! The full Arcanine zukan can be more than 150$!! Salamence and Gastrodon don't have any offer! If someone is interested on a trade I could be interested too so let me know  ^^ Just click HERE or on the photo to see the post

I still have a lot of sales on my sale post and I have shipped everything that you bought the last week!!

And about the con I met

thedaftlynx (I'm sorry being so shy, really :_____ I was happy to see both of you!), the stores was selling A LOT OF BOOTLEGS however I saw more legit figures and plushies than other years so that's cool and there was an expo about pokemon but most of them was old art or even art that I was on clearfiles, nothing really cool... but it was interesting at least! I would have done more photos but my camera died... They gave that Pikachu hats to all the people from the con (that's Diego!) and I bought a lot of things since I also met one of my favorite illustrator -Ken Niimura <3 (I know that Vulpix is a bootleg, but it's Vulpix, sorry T_T). We could also make photos to the new Pikachu on the con and if you got the 5 photos, they gave you a pin ( I only saw four :()

Also, you can take a look on the Amiibo, they are the latest version, they don't look so bad compared to the pictures from a week ago.

Well, if you didn't see the tweet from Masuda HERE ...They were awesome!! I also saw a furry cosplay of Luxray but I wasn't able to make a photo :__

Hello everyone! I just came back from OniCon and it was awesome! And now that I'm back in town and It's a new month so I'm open once more for commissions! Please keep in mind that I offer a wide variety of styles so be sure to specify which one you are interested in :)


Other Style Commissions
Slot 1 clair2522 - Walky Skuntank with ribbon and jinngle bells :) Finished!
Slot 2 princess_snivy - Shiny Standing Fennekin Plush Finished!
Thanks Everyone! Please feel free to comment ask questions, or ask about qoutes thank you!  (Also just a reminder that I am currently considering trades for items in my massive wants post as stated above ^v^)
Sorry I haven't been updating or posting much lately I plan on making a collection update very soon :D
- Vulpes

Hey guys,
i have a tons of stickers for sale! Also i've reduced the prices of Zukans and some stickers!
All my stuff looking for a new home :3 Next week i will update a tons of staks!

And one question:
What can i do against people who not leave feedback ? Its not fair for a seller to left no feedback... although their goodies have arrived... ^^