hi guys, just a quick reminder that my 3 days auction is going to end within 24 hrs from now on! Don't miss your chance to win these rare tfg figures! Thank you! 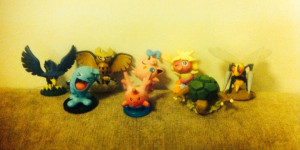 So! I went Black Friday shopping yesterday and ended up at Toys R Us. Before we left, I was looking at the cards, which was SUPER annoying because they were right next to the registers in a tiny little aisle where people were trying to walk. And the ones I wanted to look at were on the bottom shelf and people kept asking me to move...and I almost got ran over by carts a few times. ANYWAY! Despite all that, I made my decision and bought two 3-pack blister packs that came with a DP promo, two Platinum boosters, and one EX Power Keeper booster. After I checked out, I immediately regretted my purchase because I knew the blister packs were overpriced, I only needed one of the DP promo, and (after getting outside and being able to use the internet), I realized I didn't need any of the booster wrapper art and I was missing very few cards from both sets. BLEH!

No more regrets! lol. I SCREAMED when I saw Jolteon*! lol. I had NO IDEA that was in the set because I only took a quick glance at my list to see how many cards I needed from the set. I am SO EXCITED about it! I was able to trade for Flareon* and Vaporeon* awhile back but never found someone trading Jolteon* and I refused to pay $40+ for it. Jolteon is my second shiny pull ever and the first one I'll be keeping. Hitmonchan is a Secret Rare so that's neat. I don't collect Hitmonchan though so that'll be up for trade. XD!

I also opened 23 French booster packs last night. ^^ Mostly Undaunted and Triumphant. Got lots of neat pulls (including another Houndoom Prime. lol), but I'm still missing some cards from the sets. If anyone has a French Gengar Prime or Espeon Prime for trade or sale...please let me know. I'm also looking for other French cards from the sets...especially Leafeon from Undaunted since (I think) that's the only other Eeveelution card I'm missing now.

And, as always, feel free to link me to any Houndoom or Houndour items you have for trade or sale. I'm always looking for more hounds to add to my collection. XD!

P.S. I know that some of you were wanting to trade for some of the Phantom Forces and French cards from my last Livestream. I'm still working on sorting through those. I was able to get through putting about 2/3rds of them in my binders before leaving for Thanksgiving. When I return home, I'll be working on putting the rest in my binders and then I'll be able to trade soon after that. ^^;
Hello everyone!! :D
Today i am searching for someone who would either A: Trade their fluffy Pokecen Mew Plush for my 2005 Banpresto Lucario and Mystery of Mew Plush, or B: Has any information on the actual worth of my 2005 Mew. I can't find any kind of actual value anywhere. :c
If i can't find someone to trade mews with me, id like to sell my mew, but i have no idea what would be a good price for him! He is in mint condition with his near mint tag unattached. (It could be easily attached again with a little plastic tag tie.
( Collapse )

Please let me know if you're interested in trading or if you have any information about my mew! C:

I am now accepting trades now that i updated my wants list which is here! I am willing to trade things from my sales post(which i also did some minor updates to) for anything on my wants list! Click the link above to see my wants or the photo below to see my sales!

✿ I was granted sales permission on 6/11/14 by allinia
✿ My feedback is here: http://feedback.pkmncollectors.net/feedback/view/pocketmonstrmeg/
✿ All pkmncollector community rules apply.
✿ I will not sell to banned or non members.

Hello EVERYONE!
I finally found time to show you my gets!
Thank you to everyone who I bought from and I'm excited to see my collection growing!
These are the things(mostly figures) I got and not my whole collection!

And a Quick Sale!


Thank you and have a great day!

I was out today, and felt like buying a Phantom Forces pack because I don't have ANY of the new Manectric cards (a crime, I know!). Of course, I bought one with Manectric art on it, and I got a rather interesting card from said pack... 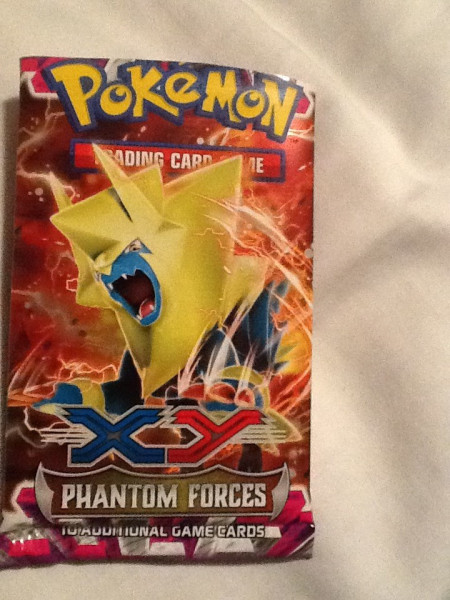 That's all for now!

With TCG city championships just a few short weeks away, I need to polish my decks! So I come here seeking a few cards I need under the cut.
( Collapse )

I don't yet have my full card inventory, I'm still working on cataloguing them all. So, I can't tell you EVERYTHING I have to offer in return. However, I've been collecting off and on since the days of the Base Set. So because of that, I have all kinds of cards ranging from the very first set ever and the most recent set. There are hundreds of cards here. It is a big, BIG task to list them all.

What I CAN do is respond to a wants list, or a list of your collections, and show you what I have. By default, I will only list TCG. If you request, however, I will also search through my figures, plush, and misc. flats for your faves.

I have no issues with buying these cards if I have nothing you want in return, and am also open to the idea of partial trades.

Here's a link to my feedback, and here's my latest sales post, in case you're looking to get rid of cards but not get more in return.

On a side note, people who purchased from me recently: This week was a liiiiittle more hectic than I anticipated, your packages have not been sent yet. They will definitely be sent out in the next week.

Just curious, are there any Facebook Groups you guys would recommend?

So last night I spent quite a few hours writing up responses TO AN INTERVIEW! I am still so surprised that someone wanted to hear what I had to say lol I feel like I am a boring person! xD But I was being interviewed as a collector, so that was really neat to talk about how it all started & stuff. Hopefully it will generate a bit if traffic through the web store to, to fund my collecting further!

Alrighty, testing out thus app some more & attempting to get a successful photo under z cut~!

Also, mission achieve mew on the Pokéwalker is in phase 1.5. Not a full success, but closer! I've tested all three of the devices & each one works. Now to sync it up & bring that cute patoot on over!

Hi all! This is going to be a somewhat long multi-purpose post, hopefully not too boring ^^;


Pikachu in Hong Kong for Christmas. The event was called Pokemon Dream Flight. I went there last week. The decorations were cute, but there were some non-pokemon related event going on... so the area inside the shopping mall, including the shop was closed. It was rather disappointing :(

But I got some leaflet. They are quite nice quality actually. I picked up a few since I think some pikachu fan might want them xD These measure roughly 6" x 8", I don't know how to describe it but it's more like card than just thin paper.These are free as long as you are willing to pay for shipping/ packaging/ fees from me. Would be $1.7 shipped in document envelop without protection, I will need to find out the price later if you want them shipped other ways. All taken! 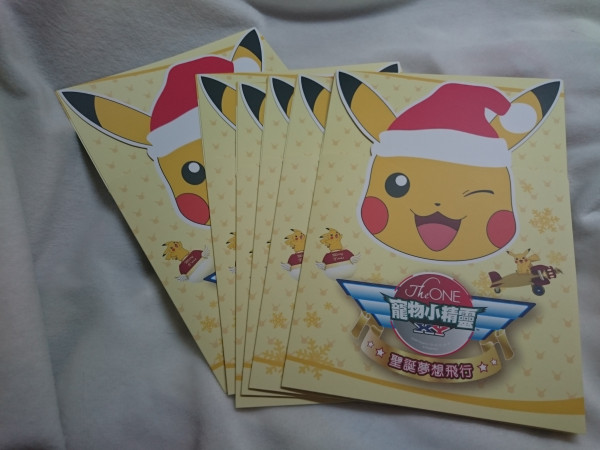 ORAS preorder rubber strap Auction
Next up, I have these two rubber strap up for auction. I ended up ordering my copies of ORAS from Japan directly and got these two ^^;

I went and picked up the figures for everyone today, and I managed to get some extra sets for people who missed my initial post (:
I have 3 (or 4 if a potential buyer doesn't take them) sets available at $18+ shipping per set.
All sold! But I can still pick up sets if you are willing to wait, just let me know.

That's all for now. Thanks all!

Hello everyone! Ive come to ask how you guys protect your hang tags?
A recent get of mine was shipped to me with cardboard protection but I would rather have some kind of clear protection so I can still see the tag. Where can I find this kind of protection? I would like something that won't bend.
Also, how do you guys protect your tags? Or do you detach and store them?

Gather 'round, ye fellow Groudon fans, for I have a review of a certain new plush for anyone who had been considering yet uncertain.  To be continued beneath the cut!

Thank you for reading, and happy collecting to you all~!  ^o^

Hey guys! It's been awhile since I made a post. Been caught up with school and all >.< but finally I have some time this weekend to post my first sales!!! *V*

Here's a Preview of some items:

Everything else is under the cut. :) EDIT: There is one plush that is going to be shipped from the US, the Kyogre plush.

PLEASE HELP!!!
I recently bought this Lugia Hasbro figure from a member, but then I got it, one side has a yellowish tint to it whereas the other side is white. I want to ask, does anyone know any good remedies to clean off the yellowish tint? I am not sure if it was caused by sun damaged or whatnot. I bought this for my boyfriend's birthday, which is coming up very soon. I really want to make it as "white" as possible for the other side.

Thank you for looking! Hope everyone have a great weekend and get well rested! :)

I decided to finally let go of my halloween costume xD It's size M (but can definitely fit a SM), in very nice condition, and from Hot Topic. I bought it a few years ago, it's the version with the ears stuffed and all pika-like :D
It's very snug and warm inside, and the quality is very nice~ 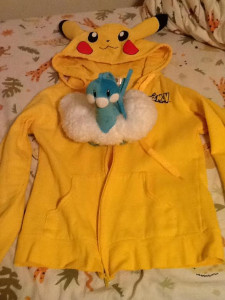 Altaria is for size reference only~ I realize that I don't need a size ref here but I really wanted to show off my latest get ;w;
Let me know if you want pics of an actual person wearing it ^^

I'm looking for 45 shipped anywhere, but I'll consider trades and offers! This is just going by what I've seen it sell for recently.

Edit: Forgot to mention, does anyone have a Latios pokecenter plush for under 30 shipped? I know they'll be on pokecenter.com for that price but I want him nooow -.- And as a side note- after a lot of careful thinking, I have decided to get Umbreon and Espeon tattoo's on my back. I'm waiting until I'm 18 so I have a little more independence, but I'll commission a person to make me the design I have in mind sometime soon! PM me if you're up for something like that~

I recently got some lovely figures and a plush from 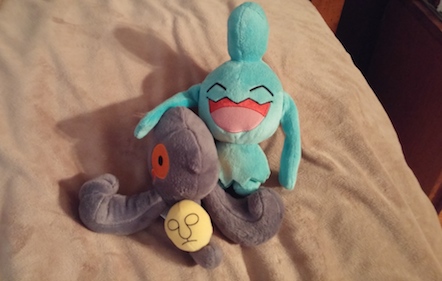 Yamask has really been growing on me :) He reminds me of the ancient history, cultures, and languages of Mesopotamia. He also reminds me of Japanese Noh theater, which is such a beautiful art. I'd like to get a few Yamask figures - does anyone have any that they could sell me? Thanks ^_^

Just a reminder that I still have some of the cute cookie straps left! (among other things) :) 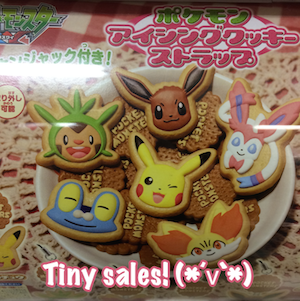