Hi everyone! There's just less than 24 hours before the BELL PLUSH AUCTIONS end! Be sure to put your bids in!!

There's also some great items for offers/sale like the Mewtwo D-arts so be sure to check them out! Thanks!!

I know a lot of people were excited when the pictures of the Pop Star and Rock Star Cosplay Pikachu plushes were released - and now it looks like we're getting all 5 variations!

I was woken up by my sister throwing a package at me today ;w;
Get is under the cut!
( Collapse )
Thank you for reading!

Just a reminder that there is one day left on my Sonokong Charizard. 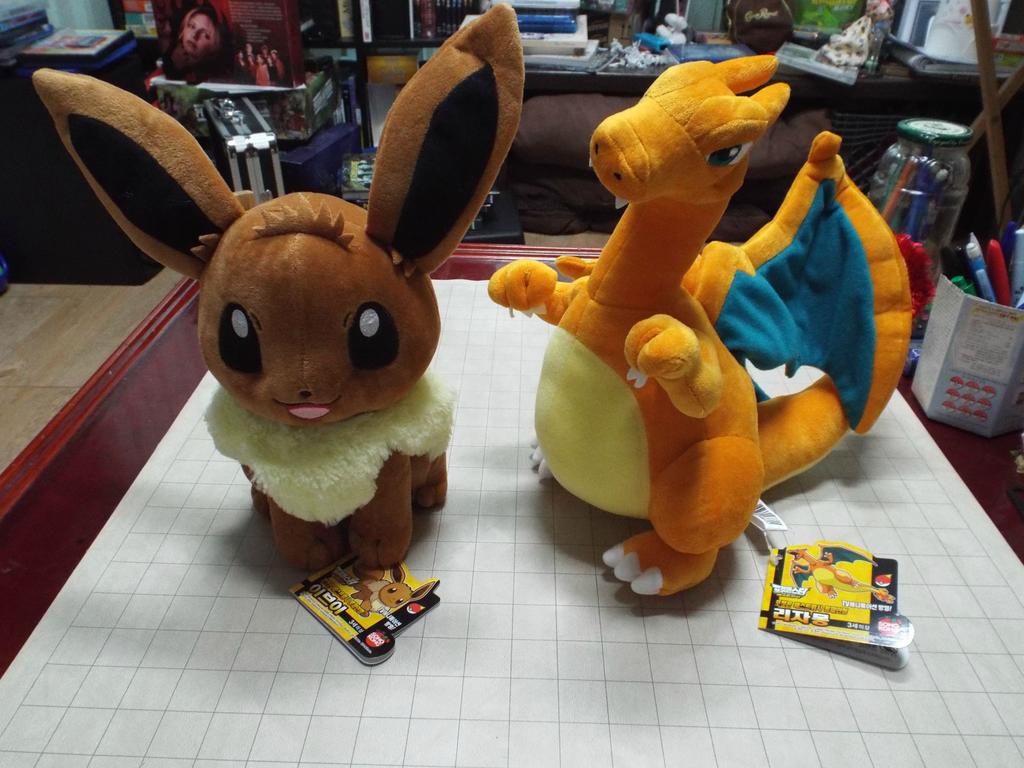 Auction can be found here!

On top of that, I also still have lots of Growlithe Canvas for $40 shipped. :D

Don't miss your chance to win these figures!
Check it out guys! 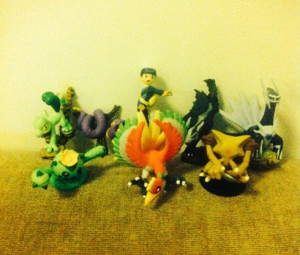 EDIT: WE NOW HAVE A PLUSH STORE, TOO! :D I finished it earlier than I thought! Orders can be combined from both stores, just leave a note~! http://pokeplush.storenvy.com/

Hi everyone! I hope you all loved your items from my last sales post (was half a year ago... wow) and are doing well!

All prices in my store have been slashed (most by half!) and I now have over 250 kids figures with the majority being at $2 each!

As always, all orders ship same or next day ^^
Thank you for stopping by~

(fake cut to the store)

I received sales permission from allinia on 6/11/14!

Hey everyone! I haven't posted here in ages, think it's been like half a year or so. I've slowed down on my collecting quite a bit, although I think that's mostly because there haven't been any new Helioptile plush, and with X/Y almost a thing of the past now I don't believe there will be too many more.

Anyway, I come today with a quick request: I'd like to buy an Espurr Pokepuff plush to give to my sister for Christmas. I was hoping that the Pokemon Center would have them up before Christmas, but despite having some of the merch from the promotion on the website, they don't seem to actually have the Pokepuff plush, and with the holiday shipping deadlines quickly approaching I'm not confident that they will. MWT would be preferred but I can also make do without the hang tag. Bought, thanks!

On another note, I have a few custom things which I obtained during my absence, none of which I thought were individually worth posting about, but since I'm here, why not show them off?

That's all for now, thanks for reading! 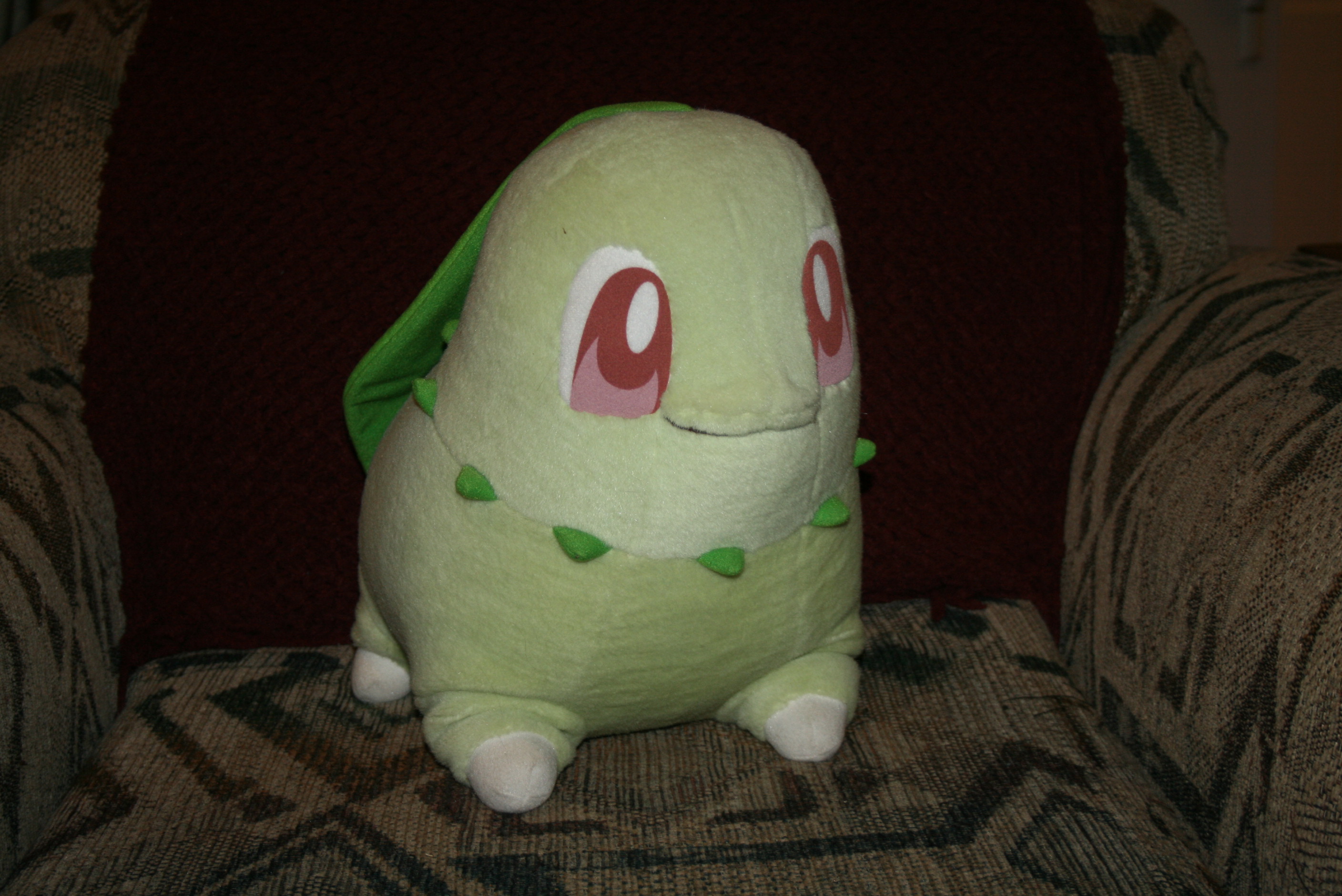 Today up for your consideration is a 1:1 size Chikorita Plush!

Check out the details below!

Hi everyone! :D I'm currently looking for a Pansage plush for a friend of my for Christmas. She's told me for a while that she's wanted to finish her little elemental trio (plus her boyfriend told no more dedenne's for her T_T ) so I figured I could help her out with this! ^_^ Either a Jacks of Pokemon Center one would do if that's okay?

I'm also still on the search for a Talking Togepi plush >_< still no leads as of right now, so if anyone has any let me know.

And to make this post a little less boring with this text, have a look at some new gets after returning to campus after my break~
( Collapse )

Hey guys! Just here to share about my package that arrived in the mail today, all the way from Japan! (Lol, when I came home from school, my mom was all like "You ordered this from Japan?!" Apparently she hasn't realized that a very large portion of things I order online come from Japan. :U) Much thanks to

moonliteumbreon for the help with finding the one pokedoll I've always wanted!

Who is this pokemon you ask? See for yourself under the cut!

Don't miss your chance on getting the Pokemon Movie Book and the HGSS Quizbook! There's only 1 more day to bid on these rare items with unique art! :D 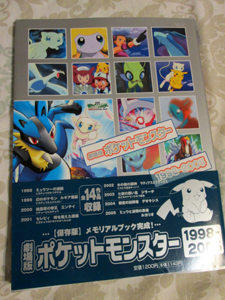 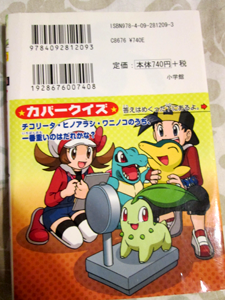 Head over to the auction right here!

I still have a ton of lovely, soft, cuddly plush on my sales post!
Prices have been lowered 10-20% for quick sale!
Don't make me eBay these babies

They'd make lovely holiday gifts for that special Poke-collector in your life ;D


I also have a good amount of cards from the Phantom Forces expansion set that I haven't had time to make a sales post for.
If you need any cards (mainly common, uncommon, rare, but I have a few holos) from PF or Furious Fists/FlashFire, let me know and I can check for you!
Basic prices are always $0.10 for C, $0.25 for UC, $0.50 for R, and holos fluctuate!
Collapse