I am glad to be easing myself back to the community after a while of no collecting.

Today, I come with a pretty unique (to me that is) want.

After receiving a swampert think chip figure from

shuuichi_chan , I have decided I need more in ny life!

So if you have any think chip figures for sale, please direct me to them! I especially want to get sceptile and groudon! Let me know what's up! I recently got a new bookshelf that I need to fill up with stuffffff!

Anyways, I also have been promoted at work again and am almost to the salaried management of walmart!
Let me know!

Hey community,
i really want the Absol Pokedoll. If anyone have this Doll for sale let me know pls! I would prefer a payment plan for this doll if its to expensive :/ The doll dont need a tag. Only the tush tag is okay.

Also i have other Absol wants. I missed some figures etc in my collection ^-^

all items are on SALE!!!

Also, where do you guys get battrios? I've never bought one before, but I need this one:

I think it's newer, but where do you get these (besides Y!J, they're kinda expensive there right now)

Hey everyone, I've added some more items I want to part with, including Pokémon Y and Black versions, a Soul Silver preorder Lugia figure, and have reduced prices on most items. :) Now's your chance to get those last minute holiday gifts~! Priority Mail is also available as well!

Haha okay i decided to get creative with the title but why not. I'm re-introducing myself. You may call me Skye. I was a small part of this community about a year or two back, but because of some of the circumstances of life outside of the computer i had to take a bit of a break. I'm a big fan of anything glaceon and sylveon, but at this point i have one sylveon in a glaceon world. I also have a few charzard and charmander things. Being an artist of all sorts of medias i like to share allot of my pokemon creations whilst updating you all on new gets. Drawings, paintings, sculptures, photos, cakes, You name it. I'll leave a cut for a few things i've made in the past. It's not allot of things but it is a breif little collection of things. I'm hoping after i've become reaquanted with you all to sell some of my works here. None the less onto the pictures! 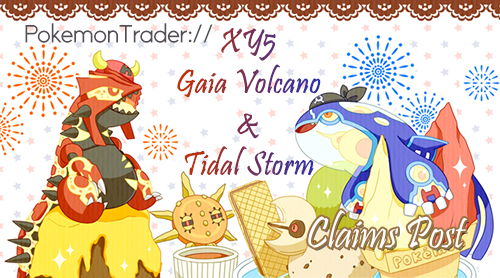 Hey everyone! It is that time again!
With XY5 newly released, I'm opening up a claims post!
My shipment is already enroute and I am expecting it by mid-next week! (:
There are a ton of awesome looking cards in this set and I highly suggest checking it out!
This set is also featuring new Ancient Trait cards! These cards have pretty epic designs!

Thanks for being awesome! :D
( Collapse )

Hey everyone! Just posting to remind everyone that my Mini Seal Box Auctions end in less than 24 hours! So if you're interested, get your bids in soon. ^^ Click here, or the picture below to be taken to the entry.

I also figured this would be a good time to post some quick collection weeding sales.

( Collapse )
Thanks for looking! ^^ If you'd like any larger or more detailed photos, feel free to ask!

I hope that as the holiday season unfolds, you are spending time with your loved ones ^-^

There's quite a bit of stuff here, so I put everything under cuts!

As a little gets teaser: 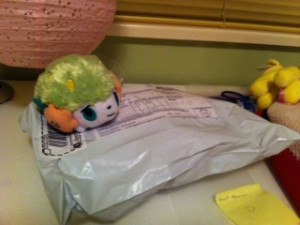 TL;DR - the title. If you have the fairy focus tote bag and you are looking to sell it, please open the cut directly above!

Thank you for reading!

Wishing you a great holiday season,

The offer period has ended. Thank you, Everyone! I'm sure that Mewtwo will be very happy in his new home. :D

Today I bring you a sale-ish post, so as per pkmncollectors rules, I was granted sales permission by entirelycliched on November 6, 2014, and my community feedback can be found here.

So my friend was cleaning out her garage when she came across this little guy: 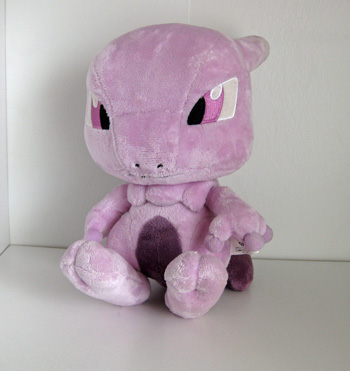 She used to sleep with this guy when she was younger (insisting that he could use his psychic powers to keep the Boogey Man away), but now that she's older, she really has no need for him. Originally, she was going to throw him away due to the fact that he is old and browning in a few places, but I insisted that someone here on the community would probably be willing to take him despite his condition. X)

So... Would anyone like to prove me correct and make an offer for him? :D

He has no hang tag, just tush tag. He's got multiple little brown spots on the back of his head and a small brown spot on his nose. I'm assuming it's dirt. Although it doesn't seem to come off when I wipe him down with a damp cloth (but I just used water, so I don't know if a little soap is all he needs). He has a bit of a smell (probably from being in storage for so long). I aired him out a bit, but if you place your nose directly on him, he does have a bit of a musty smell. Honestly, I think he just needs a quick bath and more airing out and he should be as good as new. :)

I have seen this guy on sale used on ebay for around $80+, so I'm thinking that I will start the offers at $40. Does that seem reasonable? Unfortunately, I do not offer international shipping (because it is way too expensive), so U.S. buyers only please. :3

I will accept offers until midnight HST on Monday, December 15th. (Sorry, I don't know how to do a timer thing).

Also, I updated my sales post with more multi-item lots and more plushies, so feel free to check that out as well:

Thank you so much, guys! Hope Mewtwo will find a good home. :3

EDIT: I received suggestions to lower Mewtwo's price because he is not as in demand and his "damages" aren't worth the $40 price, so his new starting offer price will be $10. :) If he is not claimed within the allotted time, I may try cleaning him off to make him more saleable since that seems to be a concern for most people. I'll also try to add close-up pics of the spots later, but it is pretty hard to get on camera.
EDIT: Pictures of the spots are up.

Just getting back into collecting and I gotta say that I am loving the Kalos merchandise. And there seems to so much of it too
The pokemon I hope to collect soon are Hawlucha, Flechling linem Inkay line, and Froakie line. I also loveothers like klefki.
My froakie line is coming along, I just don't know how many things he has

Also I'm just wondering but what is everyone elses favorite kalos pokemon? And does anyone else like Barbaracle or Klefki?
Onethingthat I always have been collecting have been tomy figures and I've been wondering what other pokemon figures will be getting a tomy figure. I'm still so shocked and surprised Klefki got one. And was wondering what gen 6 tomy figures are likely to be made

Possible Future tomy figures:
1 to 5 on how likely i think they are and are my opinions.
I am curious what you all think to
( Collapse )
There are also a handfull of tomy figures i wish would have gotten one like gabite did
#1 Scrafty/ Tangrowth
#2: Eelektross/Sesimitoad
#3: Claydol/Sableye
#4: Seviper/ Walrein
#5: Honchkrow/ Bisharp

Also was wondering if anyone had any of these tomy figures for sale:
-Ludicolo
- Granbull
- Mantine
-Litleo
-hawlucha
- Spewpa
- Flabebe
- Pangoro
- Honedge
- Meowstic
- Tyrunt

Hey lovelies! Hope finals week or whatever you have to do is going well. Long story short, money I thought I was getting in a couple of weeks is not coming until next April (yay research grant money). So, I need some money and have decided to slash prices on the stuff I have for sale. Some of the stuff includes $1 clear kids, 50 cent kids, $2 tomys and more. Please feel free to haggle, as long as its not super lowball, I will probably take it. Like I said, I want this stuff gone!

As for trades, I am always looking for the feraligatr minicot. I have also started to collect poliwhirl stuff, especially older japanese items, so if you have anything and you want to trade, let me know. :)

I received sales permission on November 6, 2014 from entirelycliched and my feedback is right here: http://feedback.pkmncollectors.net/feedback/view/a_flockofmarins/

So I've had the Leafeon vs Inkay set laying around and I hadn't opened it yet. Finally decided to open it!
( Collapse )
Thanks for reading!

Edit: Seems like you can't really see the whole picture so I'll put a link for it too!

Hello pkmncollectors! I'll be surprised if anybody remembers my username. I've been away for over a year now! I used to be a really frequent seller and buyer, but I took a second job this year and things got chaotic. Now that things are starting to wind down a bit, I'm hoping to get back into the swing of things. Anyway, hi, I'm Artikgato! I sell and collect mostly tcg cards. My favorite Pokémon to collect is Articuno, hence the 'Arti' part of my username, though I've been known to collect Butterfree, Flygon, Hoppip, Surskit, Sewaddle, and anything related to Erika or Sabrina. Click on the picture below to go to my sales post, and here is my TCG wants list for trading purposes. Thanks, and I hope everybody has a happy holiday season! 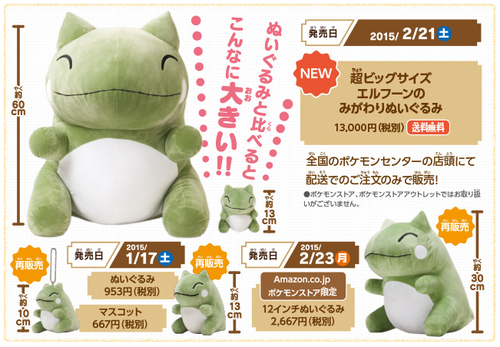 I'm super excited about this because I always regretted not getting one the last time. Hopefully they won't sell out IN TWO DAYS like the mega Pikazard plushes did. >_>

[edit] It looks like the Substitute metal charm is a gift for buying any 5 metal charms, starting Feb. 21st until supplies run out!

[edit, part deux] For people who want the super big size plush:
+ They are sold by order only.
+ Orders can only be made in person at the PokéCen.
+ Only those with a Japanese address can place an order.
+ Shipping within Japan is free, so if your buying service charges you for that, they are trying to rip you off.
+ Orders are expected to arrive in about a week, but may take longer. (Knowing the PokéCen, any order not placed within an hour of opening on 2/21 will have a two month backlog.)
+ Orders are limited to one per customer. (However, I have no idea how they're planning to enforce this.)